Nickel spot prices were slightly lower in October, and the LME inventory was significantly lower with nickel levels below 80kt which is at a nine-year low.

Welcome to the nickel miners news for October. The past month saw nickel prices slightly lower. LME inventories fell dramatically to very low levels (below 80kt), and are at a nine-year low. This is approaching the previous nickel low inventory levels that resulted in significant nickel price spikes.

The big news for the month was on October 28 when Indonesia announced that they will be suspending nickel ore exports with immediate effect. This brings forward the export ban from Jan. 1 2020, which was already brought forward two years.

As of October 25, the nickel spot price was USD 7.66, slightly down from USD 7.80 last month. LME inventories fell dramatically to very low levels (below 80kt). This is approaching the previous nickel low inventory levels that resulted in significant nickel price spikes. 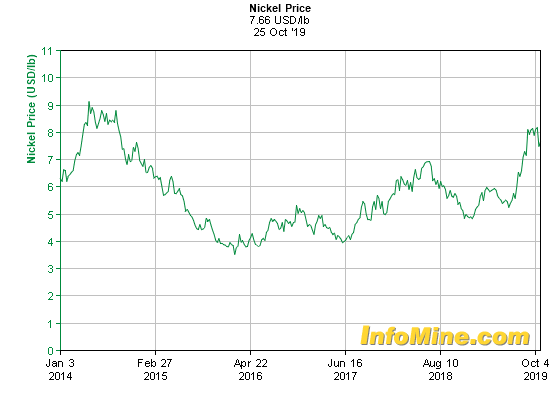 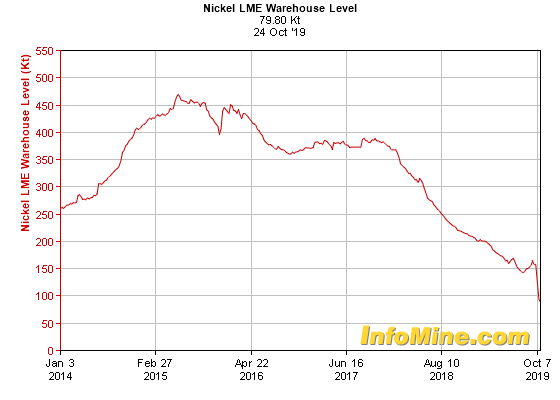 Nickel to be stand out metal for 2020, LME Week hears. Supply constraints will make nickel the top performing metal next year, despite the bearish pull of a downturn in manufacturing activity, delegates at LME Week heard on Monday.

The chart below shows nickel is forecast to be in deficit after ~2020-2022 (or at least require new supply to come online).

Note: Some others such as BMI have been forecasting a nickel surplus by 2020 due to increased Indonesian production and reduced Asian demand.

As a reminder the November 2017 McKinsey report stated: "If annual electric vehicle (NYSE:EV) production reaches 31 million vehicles by 2025 as expected then demand for high-purity class 1 nickel is likely to increase significantly from 33 Kt in 2017 to 570 Kt in 2025." That's a 17 fold increase in just eight years, albeit only on Class 1 nickel.

Investors can also read my past article: "Top 5 Nickel Miners To Consider Before The Nickel Boom."

China’s Tsingshan helped drive record drop in nickel inventories. China’s Tsingshan Holding Group Co. was one of the main forces behind a record drawdown in London Metal Exchange nickel inventories last week. The company, the world’s biggest stainless steelmaker, bought the nickel to secure supplies ahead of a looming ban on raw nickel ore exports from Indonesia. While the LME’s warehouse network is designed as a last-resort source for exactly this type of supply crisis, the scale of buying could raise concerns about a potential shortfall if the drawdowns continue. Some traders and consumers have been scrambling to pick up metal since early September, when Indonesia confirmed plans to bring forward its ban. But the move last week was surprisingly sharp — the nearly 25,000 tons that left the warehouses was the biggest decline in the four-decade history of the nickel contract. 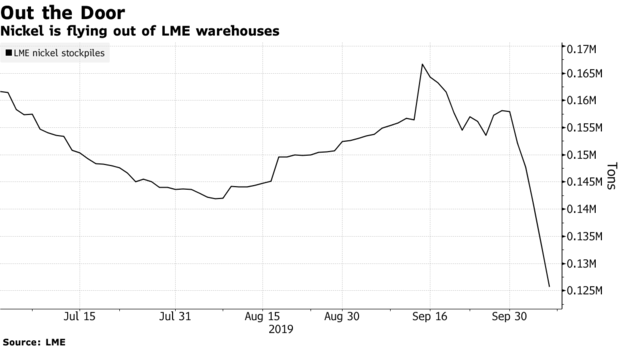 Indonesia shelves early nickel export ban for tighter inspection. Indonesia, one of the world’s top supplier of nickel ore, will allow miners to continue exports until a ban takes effect on Jan. 1 and ordered greater scrutiny of cargoes meant for shipments. Exports will be halted for about two weeks to inspect cargoes as there has been a surge in the line up of shipments....

On October 2, Vale SA announced: "Vale announces presentation on its main initiatives for the future and informs about estimates updates." Highlights include:

Vale’s performance in 3Q19. “In the third quarter of 2019, we made progress towards stabilizing our business and advanced with our objective of full reparation of Brumadinho......Nickel operations EBITDA totaled US$ 319 million in 3Q19, US$ 71million higher than in 2Q19, mainly due to higher nickel prices and lower costs, partially offset by lower sales volumes.

Shareholders of MMC Norilsk Nickel approved the dividend for the first half 2019.....The EGM approved the interim dividend for the first half of 2019 in the amount of RUB 883.93 per ordinary share (approximately USD 13.27 at the RUB/USD exchange rate of the Russian Central Bank as of August 20, 2019, the date when the Board of Directors made a recommendation on the dividend), totaling RUB 139.88 bn (approximately USD 2.1 bn).

Nornickel is about to launch the international and intercultural project FusioNNow in the North of the Arctic Circle. The FusioNNow project goes even further — its goal is not only to introduce international participants to Russia’s far north, but also to create long term relationships and opportunities to exchange experiences and collaborate on joint projects in the Taimyr and Murmansk regions.

Investors can read my article "An Update On Norilsk Nickel."

In 2017 BHP announced a US$43.3m investment in its Nickel West project to enable conversion to nickel sulphate.

BHP operational review for the quarter ended 30 September 2019. Nickel West production increased by one per cent to 22kt, reflecting higher volumes at the Kalgoorlie smelter following the fire in September 2018.

Operational update for the nine months ended 30 September 2019 and further update on the legal dispute with the non-controlling shareholder of a subsidiary of the group.

Note: There was no mention of nickel, just copper and cobalt.

Third quarter 2019 production report. Own sourced nickel production of 89,400 tonnes was slightly (2%) lower than the comparable prior period, mainly relating to Koniambo, which experienced a challenging H1 2019 ramp-up period.

Glencore one of seven mining, metals companies to partner on responsible sourcing with World Economic Forum.

Production report for the third quarter ended 30 September 2019. Nickel production decreased by 2% due to the timing of annual planned maintenance of one of the two lines at the plant. Production guidance is unchanged at 42,000-44,000 tonnes.

You can view a company presentation here.

On October 23 Eramet announced: "Eramet: Sales of €895m in third-quarter 2019, in a mixed price environment." Highlights include:

West Kimberley JV Restructure.....Major exploration push by IGO intended to continue on Buxton’s assets at both the Fraser Range and now, West Kimberley, without further expenditure by Buxton.

Panoramic's Savannah mine and mill has a forecast life of mine average annual production rate of 10,800t of nickel, 6,100t of copper and 800t of cobalt metal contained in concentrate.

Sale of Thunder Bay North Project–Further extension on signing definitive agreement. Panoramic Resources Limited wishes to advise that further to the announcement made by the Company on 3 September 2019, the Company and Benton Resources Inc. of Canada [TSX-V:BEX] (“Benton”) have agreed to extend the time by which a Definitive Agreement needs to be signed, by a further 30 days. The signing of a Definitive Agreement is one of the conditions precedent to the completion of the sale of shares in its 100% subsidiary, PAN PGMs Canada Limited (“Panoramic PGMs”), to Benton for a C$9.0million purchase price, payable in cash by way of installments. Panoramic PGMs is the 100% owner of the Thunder Bay North PGM Project situated in Northern Ontario, Canada.

No nickel news for the month but you can read the company's latest "Financial report for the year ended 30 June 2019" here.

Beta Hunt continues to deliver high-grade gold. An estimated 3,200 ounces of coarse gold has been recovered from the 15 Level A Zone approximately 30 metres north of the Father's Day Vein that was uncovered last year (see RNC news release dated September 9, 2018).

Monthly activities report for the period ended 31, August 2019. During the month of August, Axiom mined an additional 4,000 wmt of nickel laterite at San Jorge. Mining activities have now been scaled-down while the company awaits the issue of an export permit. A reduction in operations will significantly reduce costs with activities focused now on sheeting roads and preparing stockpile areas which enable the Company to be in position to scale up operations and export the nickel ore once a permit is granted.

The Cathedrals, Stricklands and Investigators nickel-copper discoveries (at Mt Alexander) are located on E29/638, which is held in joint venture by Western Areas Limited (25%) and St George (75%). St. George is the Manager of the Project with Western Areas retaining a 25% non-contributing interest in the Project (in regard to E29/638 only) until there is a decision to mine. 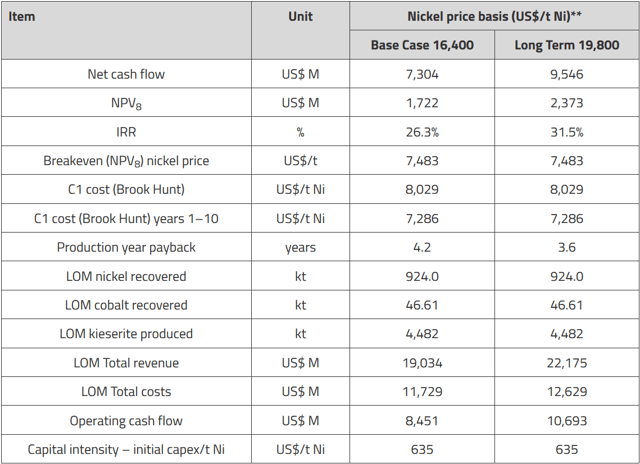 On October 21 Horizonte Minerals announced: "Drawdown of US$25 million royalty funding from Orion Mine finance."

Massive Nickel Sulphide (grading 6.11% nickel) is clearly identifiable above a sharp contact with the underlying basalt

Cobalt27 is a listed investment company that offers unique exposure to a portfolio of cobalt and nickel assets - Cobalt metal, cobalt royalties and direct cobalt/nickel properties, and one lithium royalty. Cobalt27 owns 2,905.7 tonnes of cobalt.

Cobalt 27 provides updates on the closing of the plan of arrangement with Pala Investments, the creation of Conic Metals and Developments related to the Ramu Mine. The Arrangement provides for the acquisition by Pala of 100% of Cobalt 27’s issued and outstanding common shares (other than the approximately 19% that Pala already owned), and the creation of a new company, Nickel 28 Capital Corp., that has been renamed as Conic Metals Corp. (“Conic”).

Cobalt 27 and Pala Investments announce completion of arrangement. Cobalt 27 Capital Corp. and Pala Investments Limited (“Pala”) are pleased to announce the completion of the previously-announced plan of arrangement under the Business Corporations Act (British Columbia) (“Arrangement”).....The Arrangement was approved by Cobalt 27’s shareholders at an annual general and special meeting held on October 11, 2019, and by the Supreme Court of British Columbia on October 16, 2019. Under the terms of the Arrangement, each Cobalt 27 common share held was exchanged for C$4.00 in cash and one common share of Conic.

Note: Some of the above companies are covered in the Cobalt monthly news.

Disclosure: I am/we are long NORILSK NICKEL [LSE:MNOD], GLENCORE [LSX:GLEN], RNC MINERALS [TSX:RNX], AXIOM MINING (ASX:AVQ), ARDEA RESOURCES [ASX:ARL], AUSTRALIAN MINES [ASX:AUZ], POSEIDON NICKEL [ASX:POS], AMUR MINERALS [LN:AMC]. I wrote this article myself, and it expresses my own opinions. I am not receiving compensation for it (other than from Seeking Alpha). I have no business relationship with any company whose stock is mentioned in this article.

Follow Matt Bohlsen and get email alerts
+
Add a comment
Disagree with this article? Submit your own.
To report a factual error in this article, click here.
Your feedback matters to us!