Five Prime Therapeutics (NASDAQ:FPRX) announced that it would restructure its company to conserve cash. I believe this was a smart move, because it greatly extends the cash runway. Not only that, but there is a host of data that is approaching in the coming months. With solid data from several of these studies, it would put the biotech into a better position going forward. This biotech has several products in its pipeline to diversify its risk. This biotech even already has a partnership in place with a big pharmaceutical company for one of its cancer drugs. The most important catalyst involves an interim futility analysis that is expected in the 1st half of 2020 for the lead drug Bemarituzumab. 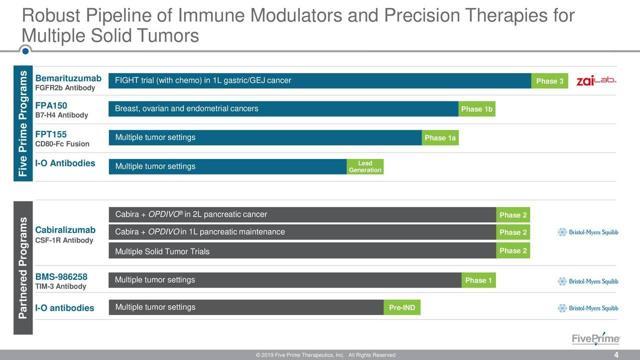 Restructuring Is Ideal To Save Millions In Cash

According to the restructuring being done, Five Prime will lay off about 70 employees. While this is bad in that more research will have to be done through outsourcing and contract manufacturing, it will save the biotech about $20 million in annualized savings. Typically, when you think about restructuring, you assume that a company does so because it is in dire shape. However, I don't see that as being the case here. That's because there are several trial readouts in 2020 that can carry the value of the company and its stock higher. Which brings me to an important point. The restructuring being done won't impact any of the ongoing studies. That means all trials that were to be read out in the coming year remain on track. Of the 70 positions being eliminated, 70% will happen before the end of this year. The rest won't be eliminated until 2020. Another plan is to sublet a huge portion of the leased space or the entire building if possible. This way, the biotech can move to a smaller facility to save costs. With the restructure being done, Five Prime believes it will incur about $3 million in pre-tax charges. As I noted above, the biotech will end up saving cash. It anticipates it will end 2019 with cash ranging from $148 million to $153 million.

Main Drug In Pipeline Already Has Been Partnered

Bemarituzumab is being used to treat tumors that overexpress FGFR2b. Two tumor types that overexpress this mutation are Gastric cancer and Gastroesophageal Junction Cancer. Gastric cancer occurs where cancer cells form in the lining of the stomach. Age and diet can possibly play a role for gastric cancer (stomach cancer). This is a large market opportunity for Five Prime Therapeutics. It is expected that the gastric cancer treatment market could reach $4.4 billion by 2024. This is the main program for the company. The reason why I make that claim is because it is already in the late-stage of clinical development. The drug is currently being explored in a phase 3 study known as FIGHT. There are a total of 550 patients expected to be enrolled in this late-stage study. Patients are to receive 15 mg/kg of bemarituzumab or placebo once every 2 weeks. Both bemarituzumab and placebo are to be combined with a modified version of FOLFOX6 which is mFOLFOX6. FOLFOX6 is a combination of chemotherapy treatments that have been put together to treat bowel cancer and pancreatic cancer. In certain instances it may also be used to treat other types of cancer. The primary endpoint will be overall survival (OS). However, there are a host of key secondary endpoints as well: Objective response rate (ORR), progression-free survival (PFS), and safety. There is a highly crucial catalyst coming for this drug in treating this patient population. It is expected that there will be an early futility analysis in the 1st half of 2020. The reason why is to see if the study is powered enough in that with eventual full enrollment the primary endpoint can be met. This is an important catalyst, because this is the most advanced program/drug in the pipeline. This program is not only the furthest along in the pipeline, but it has also already been established as a partnership with Zai Lab Limited (ZLAB). Why this partnership? Besides the fact that Five Prime gets some help in advancing this program, it makes sense for the China Region. That's because gastric cancer is the second most common type of cancer in China. Think of it in this way as well, China accounts for 40% of the entire globe when it comes to gastric cancers. Having said that, this late-stage study is going to be run in 250 centers across the globe. About half the patients will come from China and Zai Lab is responsible for the patients to be recruited in this region. Should the primary endpoint of the study be met, then Five Prime can file for regulatory approvals for Bemarituzumab to treat patients with front-line gastric and gastroesophageal junction cancers. These are the basic agreements for the deal made with Zai Lab Limited in that Five Prime has already established good items. It received an upfront payment of about $5 million. It will also be eligible to receive up to $39 million in development and regulatory milestone payments. Outside of China, Zai Lab will only be eligible to receive low single-digit royalty for sales outside of the China region. What chances does Five Prime have in succeeding in this phase 3 study? I say chances are it should be pretty good. Remember, nothing in biotech is ever guaranteed when it comes to clinical studies. However, treatment with Bemarituzumab as a monotherapy in treating late-line gastric patients produced some good data. It was revealed back in ASCO 2017 that monotherapy of the drug generated an overall response of 19% (4 out of 21 patients responding) and a duration of response (DOR) reaching 15.4 weeks. This is good, because you have to remember these are patients who have already failed multiple therapies. In addition, this data was achieved with Bemarituzumab as a monotherapy alone in late-line patients. The current phase 3 FIGHT study is employing Bemarituzumab in combination with mFOLFOX6 in first-line patients. There is no guarantee that adding in multiple chemotherapeutic agents with Bemarituzumab will end up improving first-line patients, but there is a pretty good shot that it will. The FIGHT trial is enrolling quite well as planned. Especially, when you consider that about more than 30% of the patients that have been recruited so far had the FGFR2b biomarker. There will be a pause in enrollment in Q4 of 2019, but this is not something you should concern yourself with. This may or may not be revealed in a press release, because no data will be revealed from the study at this time. What you should watch out for as a catalyst is data expected early next year in 2020. It is estimated that the biotech will perform an early futility analysis for the phase 3 FIGHT study in the 1st half of 2020. The main reason for doing this is to determine whether or not the study is powered to detect overall survival at full enrollment. I must point out this is a risky event next year, because it's possible the study could be abandoned if it appears that full enrollment would not end up seeing an overall survival benefit.

According to the 10-Q SEC Filing, Five Prime Therapeutics had $214.1 million in cash, cash equivalents and marketable securities as of June 30, 2019. A big reason for the reduction of cash was lower collaboration revenue. In 2018, the biotech received a large amount of $25 million relating to the collaboration agreement with Bristol-Myers Squibb. The company should have enough cash for quite some time based on the cash on hand. Plus, as I highlighted above, the new CEO that came in implemented a restructuring plan to save about $20 million on annualized basis. That's why the biotech is looking like it will have about $148 to $153 million in cash by the end of 2019. On top of that, a good amount of the programs in the pipeline have already been partnered. I mentioned above both the deals with Bristol-Myers Squibb and the other with the Chinese company Zai Lab.

The restructuring is good news for Five Prime Therapeutics as it is able to conserve cash. This will further extend the cash runway. Best part of all, is that no program in the pipeline is impacted from this move. A risk for this biotech is the upcoming futility analysis in the 1st half of 2020. It is a major event and the futility analysis not passing would definitely cause the stock to trade much lower. The flip side of that is there are many other drugs in the pipeline. Specifically, Five Prime has already partnered with Bristol-Myers Squibb (BMY) for cabiralizumab. This drug is being explored in multiple clinical studies for various types of cancer. Five Prime is in good shape as it has a solid pipeline in place.

This article is published by Terry Chrisomalis, who runs the Biotech Analysis Central pharmaceutical service on Seeking Alpha Marketplace. If you like what you read here and would like to subscribe to, I'm currently offering a two-week free trial period for subscribers to take advantage of. My service offers a deep-dive analysis of many pharmaceutical companies. The Biotech Analysis Central SA marketplace is $49 per month, but for those who sign up for the yearly plan will be able to take advantage of a 33.50% discount price of $399 per year.

I am the Founder of Biotech Analysis Central, A subscription service on Seeking Alpha's Marketplace. If you want to learn more about biotech investing or you want to check out my biotech analysis you can do so with a free 2-week trial to my service. Just hit the "Learn More" button on the bottom of the Marketplace Research Tab. I have a Bachelors of Applied Science Degree In Technology Management, Industrial and Business Services Management from St. Petersburg College Florida. I have been investing in biotech stocks for many years, and I prefer to invest as a long term investor. With that In mind I seek stocks that have long term value! I primarily Like to Invest In biotechnology stocks and I accept the risks. I Write for the Healthcare Sector and Stock market in general. I contribute to Seeking Alpha.

You can follow me on stocktwits.com under the name BiopharmaPro where I currently have (62.5K) followers. Join me in my quest to find the best biotechnology stocks that deliver results to help patients with new treatment options.