The third quarter was a difficult one for the Latin American region. Meanwhile, it was a mixed bag for global markets - the U.S. ended on a slightly positive note, Europe on a negative one, and Japan also on a positive one, with global markets remaining nearly flat.

The third quarter was a difficult one for the Latin American region. Meanwhile, it was a mixed bag for global markets - the U.S. ended on a slightly positive note, Europe on a negative one, and Japan also on a positive one, with global markets remaining nearly flat.

The S&P 500® ended the quarter up 1.7%, the S&P Europe 350® posted almost the exact opposite with -1.6%, while Japan's S&P/TOPIX 150 was up nearly 4%. Latin America's blue-chip index, the S&P Latin America 40, was down 6.3%. Many internal factors contributed to the region's underperformance, including reductions in exports, contractions in the industrial and service sectors, soft labor markets, political uncertainty, a slump in commodities prices, and low consumer sentiment. External factors also weighed heavily on the region, primarily the uncertainty surrounding trade negotiations between the U.S. and China.

While all Latin American markets ended in the red for Q3 2019, when comparing with USD-based returns, we noticed that, with the exception of Argentina and Peru, all markets in the region outperformed in USD terms or were flat in local currency terms. This is an example of how currency depreciation can have an impact on performance. The biggest differences were seen in Brazil and Colombia, with the S&P Brazil BMI posting a return of -3.9% in USD but 4.2% in BRL, and, the S&P Colombia Select Index returning -5.7% in USD but a decent 2.3% in COP. Mexico's headline benchmark, the S&P/BMV IPC, generated a -2.6% total return in USD but was nearly flat in MXN (0.2%). 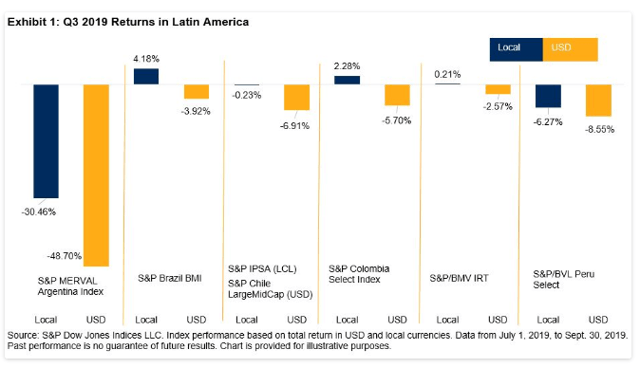 Interestingly, sectors seemed to offer a clearer picture of the region. It was certainly a tough quarter for most economic sectors, although we still saw defensive sectors like Health Care and Consumer Staples were still able to post positive returns. Real Estate, Consumer Discretionary, and Information Technology also ended the quarter in positive territory. The Materials sector, which includes mining companies, was the worst-performing sector, followed by Financials.

As Exhibit 1 shows, Brazil was the best performer in the region for the quarter. Not surprisingly, most of the best-performing stocks were Brazilian, with BRF S.A., a Consumer Staples company, finishing at the top of the list among the constituents of the S&P Latin America 40, which seeks to track the performance of the leading 40 companies in the region. In terms of indices, the S&P/B3 Momentum Index, which focuses on the top companies in the Brazilian market that show persistence in their relative performance, as measured by their risk-adjusted price momentum score, had the best return for the quarter at 14.5%.

In Mexico, the momentum index was also a top performer among factor strategies. The S&P/BMV IPC CompMx Short-Term Momentum Index returned nearly 4%, significantly higher than the benchmark S&P/BMV IPC's return (0.2%). However, in Mexico, FIBRAS ruled, and the S&P/BMV FIBRAS Index had an outstanding quarter (10.5%), as much of its returns are attributable to the high yields FIBRAS generate. As of Sept. 30, 2019, the indicated dividend yield for the S&P/BMV FIBRAS Index was 8.1%.

Peru and Colombia had difficult quarters, with Peru being the worst performer of the two. However, in both markets the best-performing stocks were from the Electric Utilities industry, proving the Utilities sector's defensive potential during challenging market environments.

As we enter the last quarter of the year, many are already looking forward to 2020. Most economists' consensus is that Latin America will continue to struggle with market volatility, stagnant economic growth, and political uncertainty. As an optimist, I think there are always investment opportunities in the short- and long-term horizon, despite the tough times. In fact, the diversity of our leading country and regional indices shows exactly that.

Follow S&P Dow Jones Indices and get email alerts
+
Add a comment
Disagree with this article? Submit your own.
To report a factual error in this article, click here.
Your feedback matters to us!