Take-Two (TTWO) stock has been one of the best market performers in the last five years, making over 400% return during that time. We have been bullish on the company since 2015 and continue to hold a positive long-term outlook. However, our comparable analysis shows that at the current market price, the stock is overvalued relative to its peers. Because of this and because of the fact that Take-Two is not expected to release any major AAA title for the holiday season, the company’s stock has a very small margin of safety at the current price, and there is a risk that it can depreciate in value first before going back to new highs in the foreseeable future.

Take-Two had a great start to the fiscal year, as in Q1 the business generated $540 million in net revenues, up 39% Y/Y, and net bookings also increased by 46%. Thanks to the successful performance during the three-month period, management decided to increase its full-year outlook and now expects the company to make around $2.83-2.93 billion in net revenues by the end of the fourth quarter.

Our latest article on the company was published in April, when the stock was trading below $100 per share. We were extremely bullish back then, because despite the fact that Take-Two’s Red Dead Online had a weak launch, sales of Red Dead Redemption 2 were far above expectations and we were certain that the company will meet its fiscal year goals, which it did. Today, we are less bullish than before simply because of the fact that there are a number of risks that are associated with owning the company at the current market price, even though we believe that in the long term Take-Two will be able to create more value thanks to its strong pipeline of franchises.

While the gaming industry increases in value every year, the number of big gaming public companies stays the same. In addition to Take-Two, publishers like Activision (ATVI), Electronic Arts (EA) and Ubisoft (OTCPK:UBSFF) control a big chunk of the gaming market and are spending massive amounts of money every year on marketing to increase their fan base. Because of this, we have decided to add financial metrics of those companies into our comparable table, while at the same time we also added Nintendo (OTCPK:NTDOY) and Sony (SNE) to our analysis, as they are also heavily investing in the development of first-party content for their respective consoles.

Below is the 1-year revenue growth rate of those companies that were mentioned above, and as we can see, Take-Two’s CAGR’s is way above others' simply due to the fact that last year the company successfully launched Red Dead Redemption 2, while in the previous fiscal years it didn’t release any major AAA title. 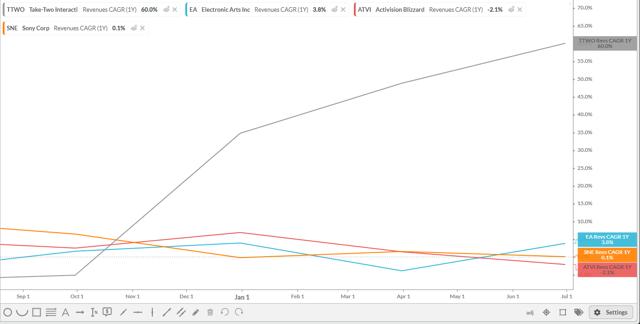 While the revenue growth rate has been enormous for the reason that was stated above, in reality Take-Two is not as efficient as its rivals. The table below shows that on an operational level, the company’s operating and net margins of 6.5% and 10.93%, respectively, are below the industry’s median of 15.88% and 12.94%, respectively. At the same time, Take-Two stock trades only 9% below its 52-week high at the time of this writing, while all the other companies, excluding Sony, are trading way lower, even though most of them are more efficient.

Source: Koyfin, GuruFocus, Yahoo Finance. The data was collected and the table was created by the author.

As for valuation metrics, Take-Two’s P/E ratio of 46.42x is nearly twice as high as the industry’s median, while its EV/EBIT and EV/EBITDA are also quite high relative to others, which makes us to believe that the company is slightly overvalued at the current market price. 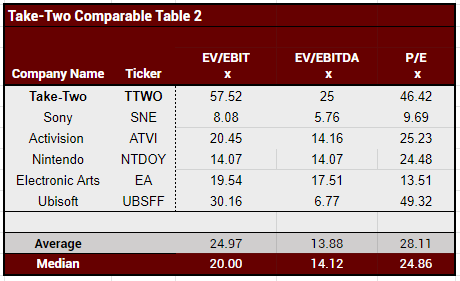 Source: Koyfin, GuruFocus, Yahoo Finance. The data was collected and the table was created by the author.

Also, as we have already mentioned, Take-Two doesn’t plan to release any AAA title during the upcoming holiday season, and because of that, it might be hard for the company to achieve its fiscal year goals with the current lineup of games. Activision already released its title Call of Duty: Modern Warfare, which will be able to keep the momentum for the next few months, as sales have topped $600 million in the first three days of launch, and Electronic Arts' Star Wars Jedi: Fallen Order is about to hit the shelves in two weeks. While Take-Two expects to release Red Dead Redemption 2 for PC next Tuesday, we believe that the game will not be as popular as the company’s GTA Online series, and it will not improve the margins of the business. Thereby, investing in Electronic Arts or Activision is better at current prices and valuations.

In addition to being overvalued, there is another risk that is associated with Take-Two stock. Unfortunately, the company is at risk of losing a large portion of its business due to the possible passage of a microtransactions bill that prevents gaming companies from selling gambling instruments to minors. This is something that we have covered in our Electronic Arts article, and even though we believe that there is a small chance for this bill to be implemented, as it needs to be passed in both chambers of Congress first, it’s still something that investors need to be aware of if they are planning to hold or are already holding Take-Two shares in their portfolios.

Nevertheless, Take-Two has a couple of things going for it. The company’s Borderlands 3 title that was released back in September had quite a success, as it was sold 5 million times in its first few days since launch. Also, Take-Two's Private Division subsidiary recently released its action role-playing game The Outer Worlds, and plans to release an additional survival game Ancestors: The Humankind Odyssey for consoles later this year. However, those games, in our opinion, will not make much of a difference to the business’s financials, and thereby, we see more downside than upside to the company’s stock at the current price.

Take-Two is without a doubt a great company that has been one of the best performers of the market in the last few years. In the long run, we believe it will be able to create additional shareholder value. However, in our opinion, at the current market price and with the current operational metrics, Take-Two is slightly overvalued relative to its peers, and at the moment there is a small margin of safety, which makes it hard to justify buying shares.

Bohdan Kucheriavyi
2.62K Followers
My passion for investing started when I was studying at a Ukrainian high school. It was at that time when I took a small loan from my parents and opened a brokerage account to learn in practice what’s it like to own and trade stocks of real businesses. After high school, I enrolled at the university to study international relations and at the same time landed a job as a proprietary trader in a local prop firm. It was there that I started to combine my academic knowledge with a passion for investing to build an all-weather portfolio that could overcome periods of constant economic and political uncertainty. Given the systemic shocks that have been happening to Ukraine in the last decade, I saw firsthand what’s it like to live in an environment where there’s too much unpredictability and no guarantee that your endeavors won’t fail. Despite this, I managed to show strong returns and since 2015 have been sharing some of my ideas here on Seeking Alpha.
Follow

Additional disclosure: Blacksquare Capital and/or Bohdan Kucheriavyi are not financial/investment advisers, brokers, or dealers. They are solely sharing their personal experience and opinions; therefore, all strategies, tips, suggestions, and recommendations shared are solely for informational purposes. There are risks associated with investing in securities. Investing in stocks, bonds, exchange traded funds, mutual funds, and money market funds involve risk of loss. Loss of principal is possible. Some high risk investments may use leverage, which will accentuate gains & losses. Foreign investing involves special risks, including a greater volatility and political, economic and currency risks and differences in accounting methods. A security’s or a firm’s past investment performance is not a guarantee or predictor of future investment performance.