For over a decade, money has been coming out of equities and going into the bond market as investors continue to anticipate imminent market collapse.

You cannot make this stuff up! Thus spake Mike Wilson, Morgan Stanley's U.S. chief equity strategists. The "wrong kind of stocks" in Wilson's mind are defensive... names like Pfizer (NYSE:PFE), Merck (NYSE:MRK) and HCA (NYSE:HCA). This is all happening while the faster growth leadership names like Amazon (NASDAQ:AMZN) and Alphabet (NASDAQ:GOOG) (NASDAQ:GOOGL) have been lagging. To Wilson, this means that even though the market has broken out to new all-time highs in the S&P, that does not equate to an all-clear signal for stocks. Maybe you should be cautious!

Thank you, Mr. Wilson, for laying another brick in that "wall of worry" that just will not seem to come down. For over a decade, the Wall Street/CNBC media crowd has been providing cautionary advice to investors, big and small. For over a decade, money has been coming out of equities and going into the bond market as investors continue to anticipate imminent market collapse.

Since the panic low of 666 in March of 2009, the S&P 500 index (excluding dividends) has compounded at over a 16% annual rate. This has been quite a run. Of course, this return was generated off of a panic low. The market had hit an all-time high of 1550 in March of 2000. It may have briefly eclipsed that number in 2007. On a longer-term basis, looking back to 2000, the return has been much more paltry... only about 4% compounded (including dividends).

The above header is a link to a Forbes article from November of last year that talks about historical S&P 20-year rolling returns dating back to the 1970s. 4.5% (1998-2018) is not so hot as the range of these returns averaged, longer term, between 4% and 8%. As such a possible reversion to the mean down the road would lead me to believe that we could be in for upside returns that might be very surprising to those advising CAUTION. This view is reinforced by the shunning of stocks and favoritism that bonds have been shown over the past 10 years.

"According to data from the Investment Company Institute (ICI), domestic equity funds experienced outflows of $105.5 billion in 2018, $30 billion of which flowed out in the fourth quarter." (Source)

This continued in the first quarter of 2019.

"... Investors pulled $5.6 billion from stock funds in the first quarter (2019) while pouring $94.2 billion into fixed-income funds, according to Bank of America." (Source) 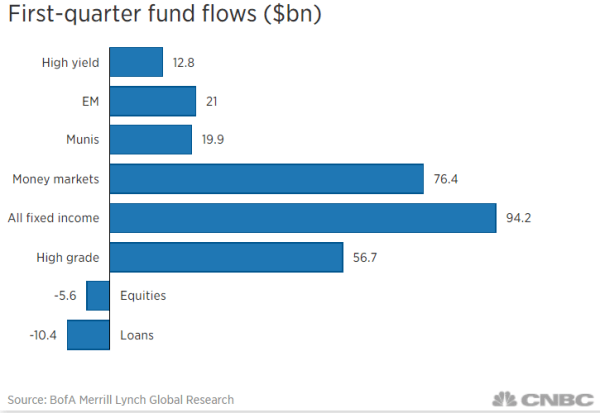 Why should we love defensive leadership in the market?

We should love it because it signals fear and caution as the market moves into new all-time high territory. Fear and caution are never present at secular bull market tops.

Follow Bill Kort and get email alerts
+
Add a comment
Disagree with this article? Submit your own.
To report a factual error in this article, click here.
Your feedback matters to us!