When we last covered The Kraft Heinz Company (NASDAQ:KHC), we left with a bullish message:

KHC's current EPS run rate would allow for paying the dividend and reducing the debt by about $1.2 billion a year. While that is not a large number, it is sufficient. In this low-yielding environment, no one is going to refuse to finance KHC's debt. We think KHC will make it out okay, and we are getting a good brand at a decent price. We would still buy the stock in light of where the company is in the cycle and believe a $40 stock price can be achieved rather rapidly if KHC turns its organic sales around.

Source: Kraft Heinz Might Be Close To The Final Bottom

Our thesis rested on a turnaround in sales and bottoming out in earnings per share metrics. While not specifically mentioned in the conclusion, we also had a very bearish outlook on the US dollar and we expected that to help sales. With Q3-2019 results out, we decided to see if this battleship was actually turning.

At first glance net income was up rather strongly despite falling sales. 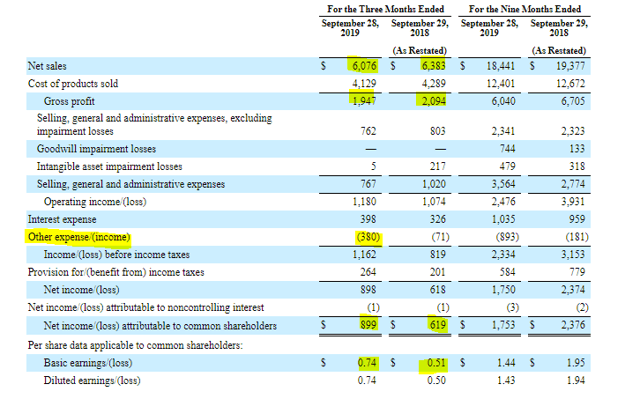 This was driven though by $380 million of gains (shown as negative expenses) from the gain on the sale of Canadian natural cheese business. Adjusted EPS came in at 69 cents for a 9.2% year-on-year decline. But the Street had thrown in the towel on this and was expecting 54 cents. In light of that, KHC totally blew away expectations.

Looking back at the first half of 2019, we can see that KHC had a very hard time controlling expenses as sales fell. The 4.8% decline in sales translated into a 19% plus drop in EBITDA. 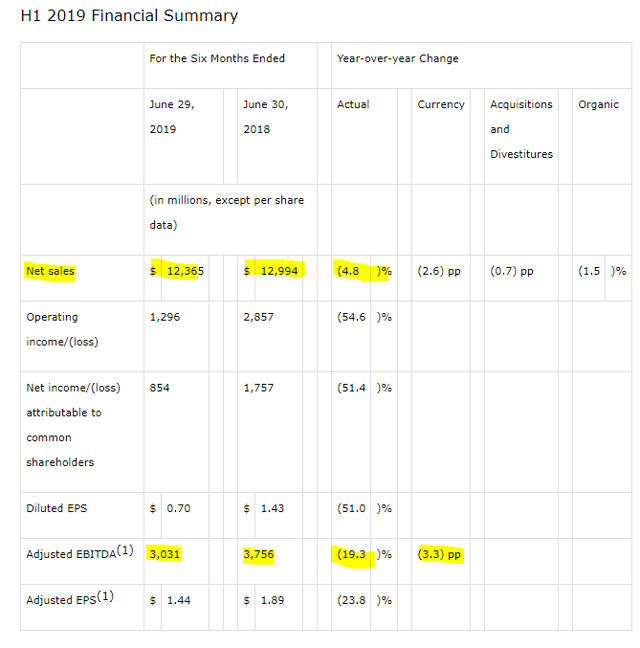 Q3-2019 sales decline was exactly the same as the first half, but KHC was able to control costs better and EBITDA decline was significantly better managed. 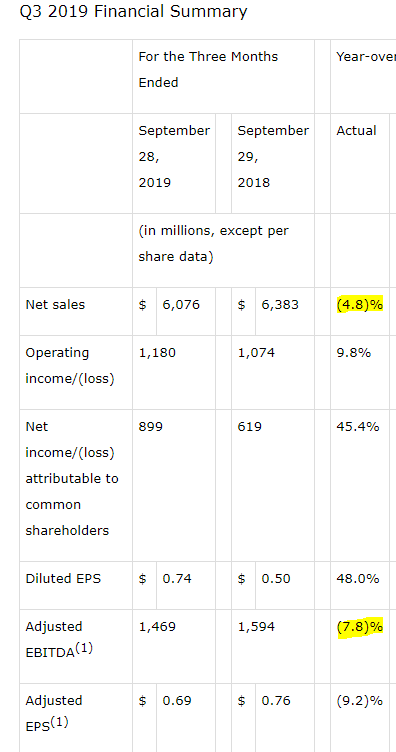 In addition investors got to see two segments actually start to show some organic growth. 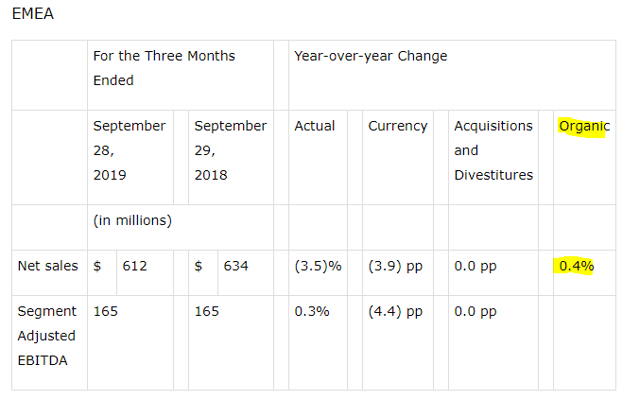 EMEA net sales were $612 million, down 3.5 percent versus last year. This was driven by a negative 3.9 percentage point impact from currency. Organic sales increased 0.4 percent versus the year-ago period. We saw similar trends in the "Rest of World" segment. 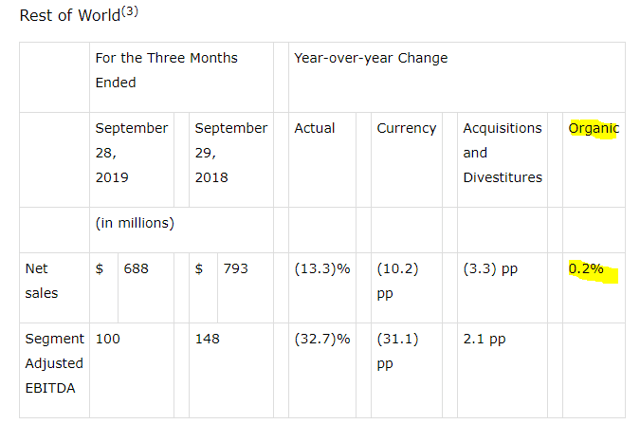 It is very notable what currency trends are doing to the final reported number in US dollars. Last 12 months have been a period of brutal US dollar strength and abatement of that pressure alone would allow KHC to improve its reported sales numbers.

The Mumakil In The Room

While the far fringes of the world showed organic growth, KHC remains challenged in its home turf. Organic sales declined 1.6% year over year. 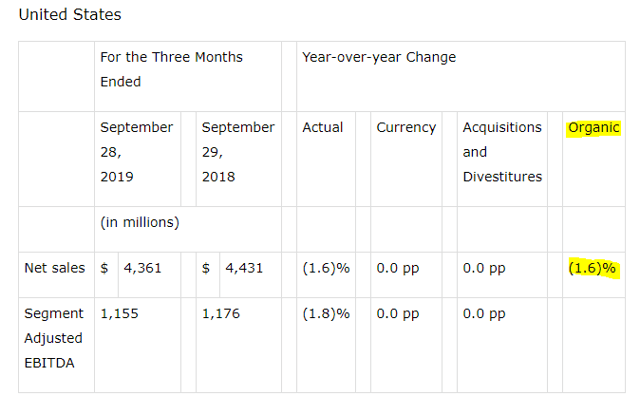 Since US forms the bulk of the total sales, turnaround here is rather essential to any long-term bullish thesis. While this segment still looks in a rut, inventory movements at retailer level seem to be driving this more than anything else. Specifically KHC mentioned:

This is extremely encouraging and suggests underlying negative trends might be petering out.

The $1.60 of dividends looks well covered based on the earnings. But the key trend will be if KHC can get the EBITDA moving higher. While KHC did beat estimates, one must remember that EBITDA moved lower again and the rating agencies have their eyes glued on that. KHC did reduce leverage again this quarter so that does buy it some breathing room.

In Q3, we announced an additional $2.3 billion of cash-funded debt take-out that was enabled by a combination of divestiture proceeds and solid cash generation. And along the way, we have taken a number of actions to put our patience in an overfunded stock and have prefunded most of our post-retirement benefit obligations. As a result, we have minimum future contribution requirements going forward. Also in Q3, we undertook a successful leverage near to $3 billion refinance that further strengths our liquidity. We have a strong investor participation in our offering that we think reinforced investor confidence. And this refinance gives us significant flexibility through 2025, especially given the fact that we currently have no commercial paper outstanding and a $4 billion revolving credit facility that has never been drawn. Refinancing our debt as well as establishing our long-term strategy are critical steps to defining how we will continue to deleverage our company and maintain our investment-grade status.

We think the dividend cut is still possible and only if we get a couple of quarters of EBITDA growth would it be out of danger. The conference call also contained some ambiguous language (which is not atypical) for the dividend. We assess the overall risk of a dividend cut as: 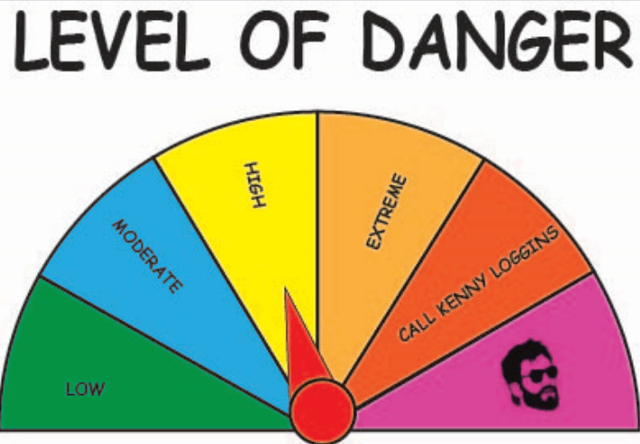 This is one level higher than where we rated it last quarter. While core sales have done well, we had expected the US dollar to be much weaker at this point, which has not happened. Hence, the risk has gone up in our view.

Reasons to be bullish

If US sales can just stabilize and the US dollar starts reversing its jump against emerging market currencies, KHC's earnings are likely to power to $3.00 share very rapidly. The Street is still in "thrice bitten, forever shy" mode. We do not blame it, but it does open up a good possibility of further gains. Right now, 2020 estimates remain entrenched and lower than 2019.

There is a lot of room for upside surprise, and when these analysts finally start getting optimistic, KHC will have moved another 20% higher.

KHC has got the momentum swinging back. To be fair, it really had lowered the bar quite substantially after the previous 12 months of misses. We still like it here and investors fretting over the debt "burden" are likely not appreciating how quickly those debt to EBITDA numbers can improve if sales start showing some life. But until we see an uptick in EBITDA numbers, the dividend could be cut. Regardless of that, the stock is still cheap. Bears pressing here are likely to lose. We think KHC should trade at about 13X 2021 EPS estimates, and when we say estimates, we mean our estimates. We maintain a $40 price target on this.

While KHC did not make it our Buy list, we are making it easy for you to see the whole portfolio. Join us today and get instant access to our model portfolio targeting 9-10% yield, our preferred stock portfolio, our bond portfolio, and income tracking tools.

High Dividend Opportunities, The #1 Service for Income Investors and Retirees 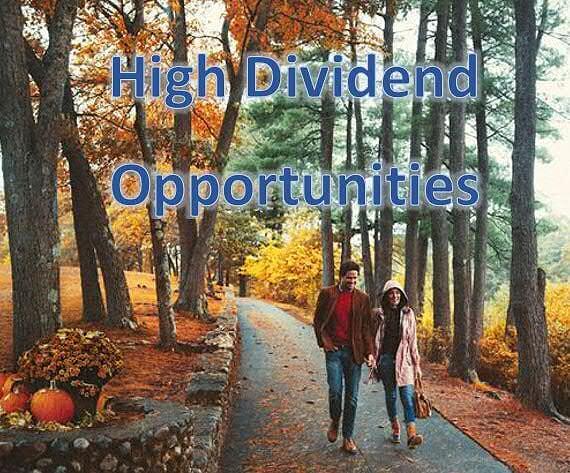 We are the largest community of income investors and retirees with over 3,400 members. Our aim is to generate immediate high income. We recently launched our all-Preferred Stock & Bond portfolio for safe high-yields ahead of a weaker economy and market volatility.

Disclosure: I am/we are long KHC. I wrote this article myself, and it expresses my own opinions. I am not receiving compensation for it (other than from Seeking Alpha). I have no business relationship with any company whose stock is mentioned in this article.

Please note that this is not financial advice. It may seem like it, sound like it, but surprisingly, it is not. Investors are expected to do their own due diligence and consult with a professional who knows their objectives and constraints.HDO is not long KHC and this is not an official HDO pick.

136 Comments
To ensure this doesn’t happen in the future, please enable Javascript and cookies in your browser.
Is this happening to you frequently? Please report it on our feedback forum.
If you have an ad-blocker enabled you may be blocked from proceeding. Please disable your ad-blocker and refresh.