The general impression from the Q3 results for Pinterest (NYSE:PINS) was of a solid quarter. The stock fell up to 20% following the report, as the problem was the valuation was priced for perfection. Even strong revenue growth wasn't enough to keep the stock valuation above $15 billion, and investors shouldn't expect much upside with the stock still at $20.

The market might be efficient in executing trades, but the current climate is horrible at separating the company from the stock. For Q3, Pinterest reported revenue growth of 47% and monthly average users (MAUs) growth of 28%. The company is just fine.

A lot of the analyst concern was saturation in the U.S., where MAUs were only up 2 million from the 85 million in Q2. The company has consistently added a few million MAUs per quarter, with the Q2 numbers actually flat when the stock soared above $30. The global MAU growth was actually 28% this Q3 vs. only 23% last year, so clearly the issue wasn't related to any user growth problems. 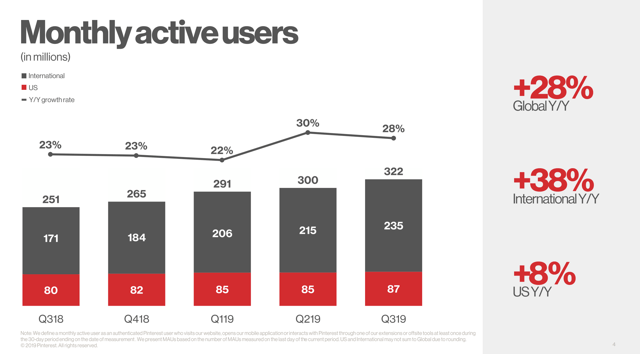 Pinterest did miss revenue estimates, and based on valuation, the stock was due for a pullback. The company reported revenues of $280 million vs. expectations of $283 million. A small miss off of 47% revenue growth isn't a reason to panic. 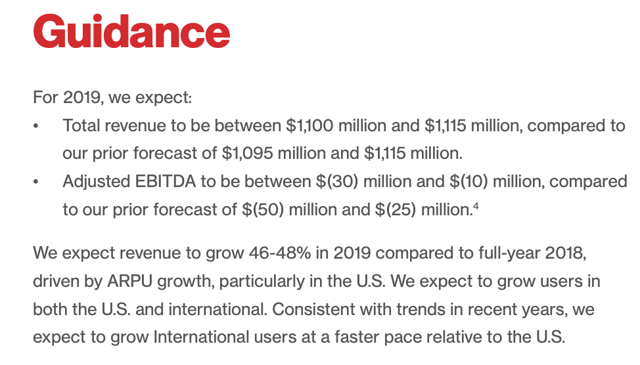 The revenue numbers weren't any reason to panic either. In essence, Pinterest saw global ARPU jump to $0.90, and analysts were looking for $0.91. The difference is minimal, but impactful over a user base of 322 million MAUs. 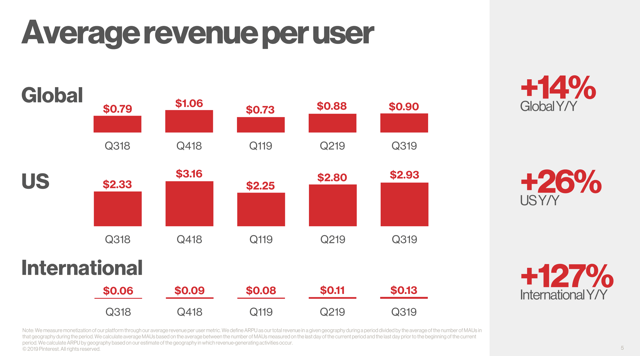 Again, no reason to panic here on the company. The issue is the stock valuation, which is a problem that has persisted since the IPO.

The Only Real Problem

Pinterest lists 651 million diluted shares outstanding, valuing the stock at $13.6 billion. Most financial websites list the stock valuation around $11.0 billion, implying the incorrect use of a share count of only 527 million.

Assuming the company can still hit analyst estimates for 2020 revenues of $1.5 billion and with a cash balance of $1.73 billion, Pinterest has a forward EV/S multiple of 7.9x. Comparing it to other social media stocks like Snap (SNAP), Twitter (TWTR) and Facebook (FB) actually starts placing the stock closer to a reasonable entry point. Pinterest is only slightly more expensive than Facebook and Twitter, while it is actually cheaper than Snap.

For an investor looking for fast growth in the sector, Pinterest is the better bargain over Snap, having achieved positive adjusted EBITDA numbers in Q3. Pinterest forecasts dipping back to an adjusted EBITDA loss in Q4 to the range of $20 million, down from a $52 million gain last Q4.

The numbers are far better than the big EBITDA losses of Snap. For Q3, Snap burned another $42 million via EBITDA losses and $84 million via free cash flow losses. The operator of SnapChat does expect near-breakeven Q4 adjusted EBITDA numbers.

The key investor takeaway is that the problem with Pinterest was the stock valuation and not the company. The recent valuation was 50% higher, where the forward EV/S multiple was above 10x.

Investors should brace for decelerating revenue growth in out years, but the stock gets far more appealing down closer to my original price target of $15. At this price, the valuation gets closer to a bargain compared to sector leaders like Facebook and Twitter.

Stone Fox Capital
37.91K Followers
Author of Out Fox The Street
Out Fox the market with misunderstood, high reward opportunities
Stone Fox Capital Advisors, LLC is a registered investment advisor founded in 2010. Mark Holder graduated from the University of Tulsa with a double major in accounting & finance. Mark has his Series 65 and is also a CPA.

Disclosure: I am/we are long TWTR. I wrote this article myself, and it expresses my own opinions. I am not receiving compensation for it (other than from Seeking Alpha). I have no business relationship with any company whose stock is mentioned in this article.

76 Comments
To ensure this doesn’t happen in the future, please enable Javascript and cookies in your browser.
Is this happening to you frequently? Please report it on our feedback forum.
If you have an ad-blocker enabled you may be blocked from proceeding. Please disable your ad-blocker and refresh.