If it weren't for Trump's trade wars and a dearth of business investment, the economy would be in excellent shape. As it is, growth continues along the moderate 2% path that it has followed for more than 10 years. It's been the weakest recovery ever, but also the longest business cycle expansion. And with no obvious excesses or systemic problems in view, it promises to continue. 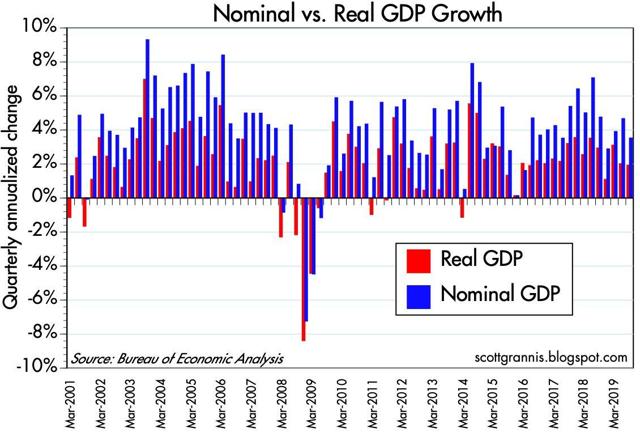 The Q3/19 GDP report - 1.9% annualized growth - makes the current expansion the longest on record. Chart #1 shows the quarterly annualized growth rate of both nominal and real GDP. To be sure, 2% growth isn't a barn-burner, but it's impressive given the degree to which the manufacturing sector has been hit by Trump's tariff wars. 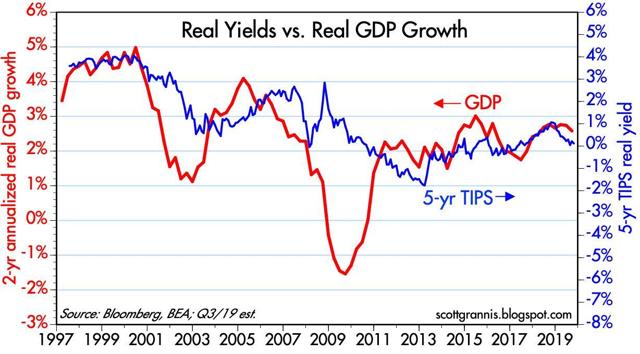 Since the recovery started just over 10 years ago, annualized GDP growth has been 2.3%; in the past year, it was 2.0%, and in the most recent quarter 1.9%. As Chart #2 suggests, for most of this past year the market has been expecting growth to slow, and indeed it has. That is reflected in the more than 100 bps decline in the real yield on 5-yr TIPS since late last year. At today's real yield of a mere 0.05%, 5-yr TIPS appear to be priced to the expectation that real GDP growth will average about 2% per year going forward. Not surprisingly, Chairman Powell recently chimed in with a similar view, saying the FOMC expects moderate growth of about 2%. 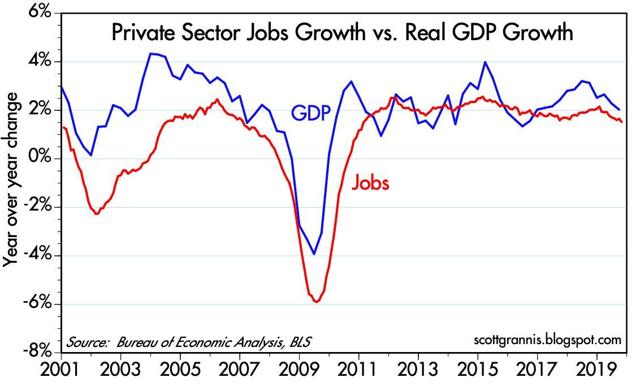 Chart #3 compares real economic growth with private sector jobs growth. Not surprisingly, the two tend to move together: more jobs means more growth. The recent slowdown in GDP growth is reflected in a similar slowdown in jobs growth (the October jobs report was much better than expected, but it didn't do much to change the trend growth rate of jobs, which has been declining so far this year).

Both jobs and GDP have suffered from a lack of business investment, which likely has a lot to do with the uncertainties surrounding international trade. Private sector jobs currently are growing at pace of about 1.3% per year. If jobs grow at least 1% per year and productivity registers at least 1% per year (which it has in recent years), then 2% real economic growth is sustainable. (Jobs growth plus productivity growth is a decent first approximation for overall economic growth.) For growth to move higher, we would need to see a pickup in business investment, which not only creates jobs but improves the productivity of existing workers. A resolution to the tariff wars would undoubtedly prove a catalyst in that regard. 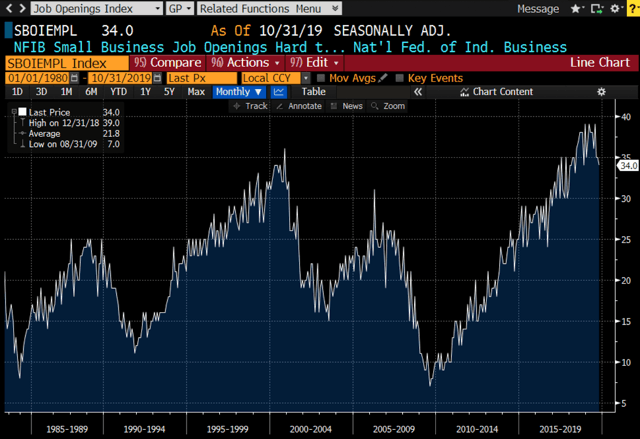 Demographic factors (more and more boomers are retiring) likely also play a part in this year's slowdown. Employers continue to complain that their biggest problem is finding qualified workers. Chart #4 shows that more small business owners than ever before report that "job openings are hard to fill." 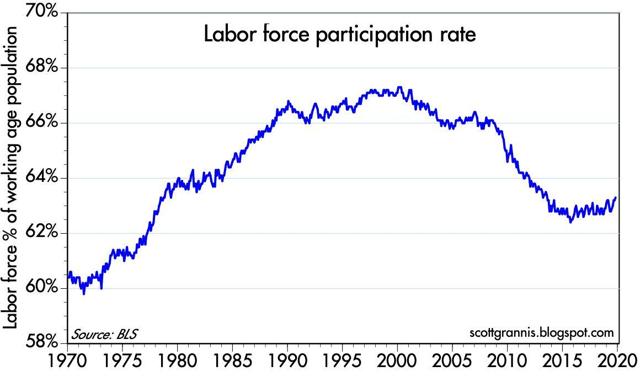 But it's not like the economy is running out of available workers. As Chart #5 shows, the labor force participation rate (the percentage of the working age population who are either working or looking for work) looks to be increasing, albeit slowly. People who had been on the sidelines are being enticed to return, perhaps because they see better opportunities. Or in the case of not a few retired baby-boomers I know, they have decided that working is better than just sitting around watching TV. Regardless, there are still almost 6 million people out there who officially are looking for work, according to the BLS. 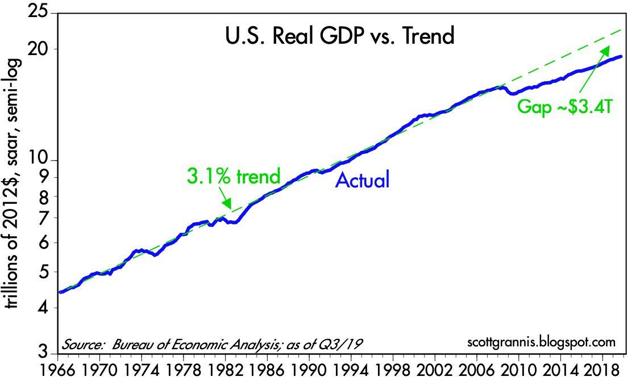 Chart #6 compares actual growth in real GDP to its long-term trend. (Note that this is plotted using a semi-log scale for the y-axis; a straight line on this chart thus corresponds to a constant rates of growth.) By only averaging 2.3% per year, the current recovery - the weakest in history - has resulted in a $3.4 trillion "shortfall" of growth relative to what might have been had the economy rebounded to its long-term trend as it did after every prior recession. Had this been a "normal" recovery, real median family income might have been almost 18% higher (~ $1,000 per month) than it is today. 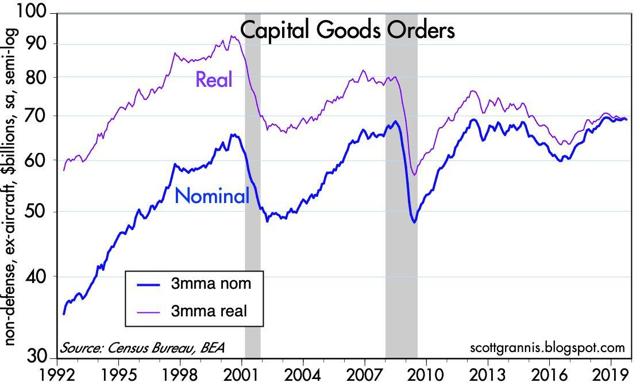 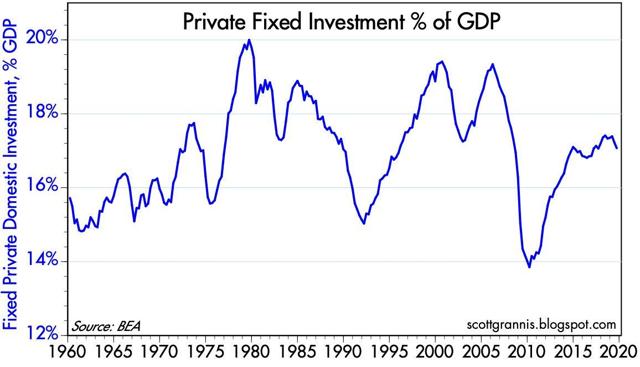 Charts #7 and #8 show two measures of business investment. Both show that investment in the current business cycle has been weaker than in previous business cycles (especially in real terms, as Chart #7 highlights). Weak investment is likely major factor behind the economy's unimpressive 2% growth rate. Which is unusual, because corporate profits have been unusually strong in the past decade. 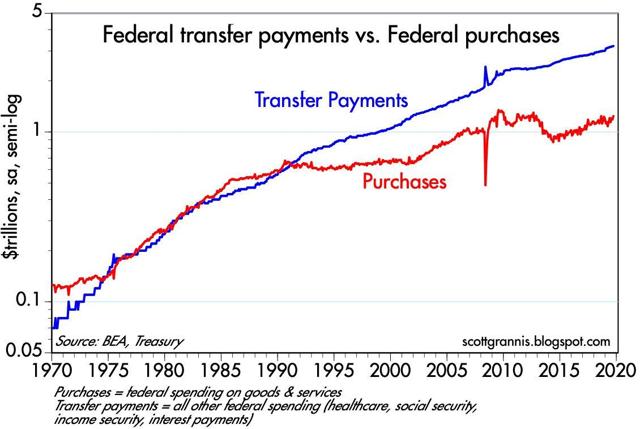 What other factors might be restraining the economy's ability to grow? The size of government ought to top anyone's list. In the past 12 months, the federal government spent a staggering $4.5 trillion, almost 21% of GDP, and 8% more than the same measure a year ago. Even more staggering, though, is the composition of that spending: 72% of what the federal government "spent" in the past year ($3.2 trillion) was in the form of transfer payments (see Charts #9 and #10). That's money that is spent on things like healthcare, social security, income security, and interest payments on debt (as of last June the annual interest on federal debt outstanding was a little over $600 billion, or 13.3% of federal spending). Only 28% of federal spending was for goods and services (i.e., true purchases). Think of purchases as a proxy for what it costs to run the government, while transfers are basically entitlements-spending that is determined not by the budget process but rather by eligibility.

Note how the growth in transfer payments has surged relative to the growth of purchases since the early 90s. As Chart #10 shows, since 1970, transfer payments have more than doubled relative to total spending. By far the biggest role of the federal government in today's economy is that of an income transfer agent. Needless to say, with $3.2 trillion per year (and growing) on autopilot, the potential for fraud and waste is ginormous. It's safe to say that the huge size of government transfer payments acts as a drag on overall economic growth and efficiency. And it's only going to get worse unless changes are made to entitlements eligibility (e.g., raising the social security retirement age and/or indexing social security payments to inflation rather than wage growth).

These are problems that have been and are going to be with us for a long time. In the meantime, it's reassuring to note that financial market conditions look quite healthy: 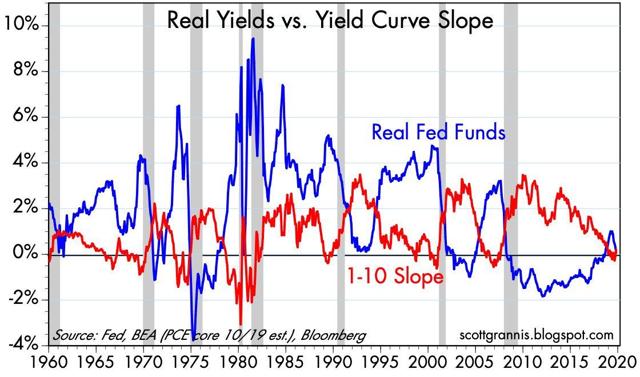 The threat that an inverted yield posed to the economy (a threat I discounted long ago) has now disappeared. As Chart #11 shows, the Treasury yield curve is now positively-sloped (the 1-10 spread is about 20 bps today), and the real Federal funds rate is essentially zero. The Fed is not tight, and their recent decision to lower their target rate, while overdue, was welcome. The Fed has now caught up to the market and things are thus looking copacetic. 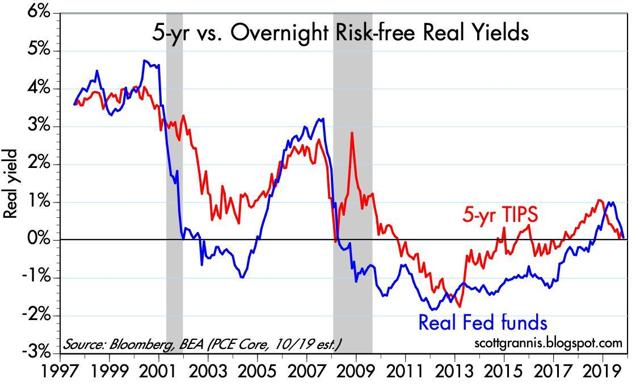 The real yield curve is actually a better thing to look at, and here too things look good. The blue line in chart #12 is a proxy for the overnight real rate, while the real yield on 5-yr TIPS is the market's estimate of what the overnight real rate will average over the next 5 years. Both are identical. By lagging the market's expectation of falling real rates for most of this year, the Fed had been threatening with policy arguably "too tight." But now the Fed is neutral. A sign of relief. 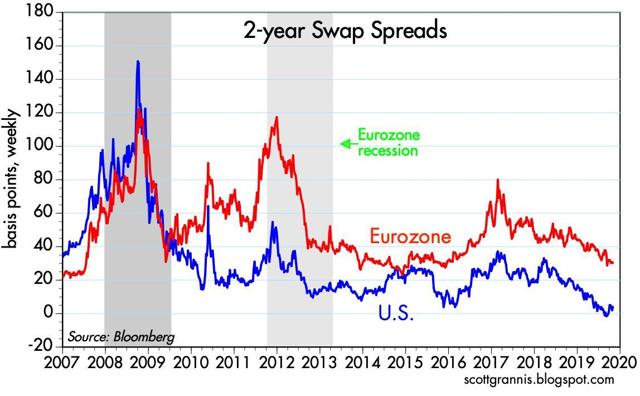 Swap spreads (see Chart #13) are my favorite leading and coincident indicator of systemic risk, financial market liquidity, and fundamental economic health (the lower the better). Swap spreads are now low both here and in the Eurozone. Things could hardly be better. 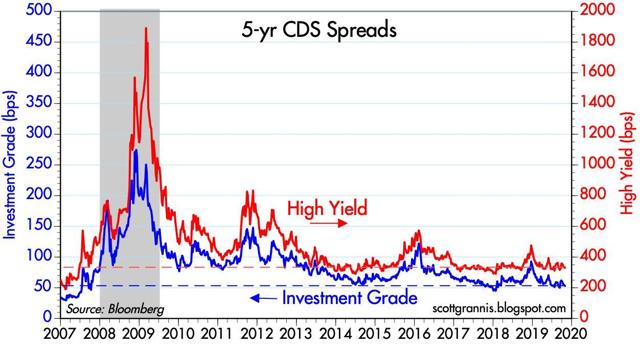 Calafia Beach Pundit
55.31K Followers
Scott Grannis was Chief Economist from 1989 to 2007 at Western Asset Management Company, a Pasadena-based manager of fixed-income funds for institutional investors around the globe. He was a member of Western's Investment Strategy Committee, was responsible for developing the firm's domestic and international outlook, and provided consultation and advice on investment and asset allocation strategies to CFOs, Treasurers, and pension fund managers. He specialized in analysis of Federal Reserve policy and interest rate forecasting, and spearheaded the firm's research into Treasury Inflation Protected Securities (TIPS). Prior to joining Western Asset, he was Senior Economist at the Claremont Economics Institute, an economic forecasting and consulting service headed by John Rutledge, from 1980 to 1986. From 1986 to 1989, he was Principal at Leland O'Brien Rubinstein Associates, a financial services firm that specialized in sophisticated hedging strategies for institutional investors. Visit his blog: Calafia Beach Pundit (http://scottgrannis.blogspot.com/)
Follow
23 Comments
To ensure this doesn’t happen in the future, please enable Javascript and cookies in your browser.
Is this happening to you frequently? Please report it on our feedback forum.
If you have an ad-blocker enabled you may be blocked from proceeding. Please disable your ad-blocker and refresh.