Today's jobs report beat expectations of 89,000 jobs, but were mostly in the lower-wage sectors.

Average three-month and six-month jobs have both declined since August.

The slowdown continues, but recession doesn't appear on the horizon.

The US is the less sick man in the global recovery ward.

This morning's jobs report was fair at best, but turbocharged by 95,000 revisions in prior months. Increases from revisions may affect forecasts for prior months, but they do not necessarily harbor an improved prospective outlook.

Our confidence in the economy has generally improved since March, when we urged investors to move toward cash, but we remain circumspect, led by the decline in average GDP discussed in our 2019Q2 GDP report. (As of Wednesday's GDP report, average GDP for the four preceding quarters has fallen further, to just 2%; not great, but clearly better than the rest of the G7).

We're troubled by the overall decline in average jobs, which signals a slowing economy as well as the disproportionate number of low-wage jobs in this month's report. Trump Administration officials' efforts to spin today's number to over 300,000 should be taken with a grain of salt and perhaps considered an effort to obfuscate the declines in average jobs data and the weight of low-wage jobs that made up the "beat", as seen in the charts below. 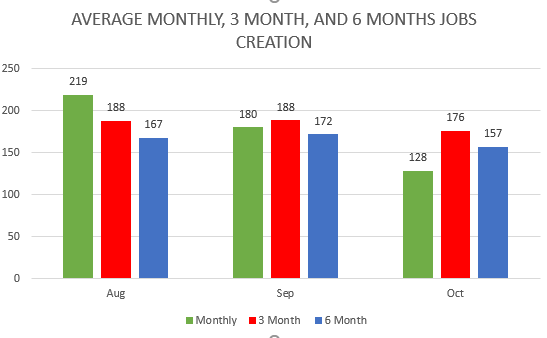 Today's ISM Report showed a modest improvement over last month. As we discussed in our August jobs report, we foresaw a slowdown, but not a recession in 2019. We can say now that we're confident of that forecast through 2020Q2, barring a "black swan".

Domestic political considerations are also now weighing much more heavily on our outlook this month than last.

Yesterday's virtually party-line vote for impeachment signals even wider division in an already divided electorate and could foretell another government shutdown when the current continuing resolution runs out November 21st.

Moreover, the decline in Joe Biden's fortunes in early primary states signals that the moderate wing of the Democrats will likely be subsumed by others much more progressive, principally Elizabeth Warren or Bernie Sanders, whose policies might tend to roil markets.

Our concerns about the rollover of dollar-, euro-, and pound-denominated debt China owes American, European, and British banks continues, renewed by the continuing decline in CNY in USD:CNY. While the yuan has improved somewhat since last month, it is still near a five-year low relative to the dollar. Among our other concerns:

All things considered, we are still at a "green light" outlook, but dependent on future data. The slowing US economy we identified back in our August jobs report continues, but we reiterate our sense that a recession (i.e., two consecutive quarters of negative growth) is unlikely through at least June 2020. The closest possible start of a recession we foresee is 2020 Q3, but again which would not be identified until after the November elections. A "black swan" would obviously alter that view.

The 2019Q2 GDP originally printed at 2.1%, revised, the lower end of our predicted 1.9% to 2.4%. But, as we expected, that number printed lower on its final revision. Our 2019Q3 estimate of 1.5% to 2%, which we had reduced last month from 1.7% to 2.3%, covered Wednesday's 1.9% GDP print. Geopolitical and domestic political concerns continue to be troubling and we expect the GDP number to be volatile as circumstances change. Keep apprised of our outlook by checking our jobs reports here on Seeking Alpha.

Let's look at our exclusive schedule of jobs creation by average weekly wages for the October jobs report: 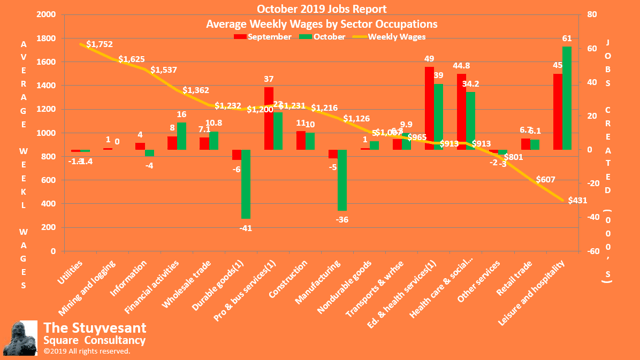 Advance U.S. retail and food services sales for September 2019 (which is adjusted for seasonal variation and holiday and trading-day differences, but not for price changes) were $525.6 billion, a decrease of 0.3% from the previous month and 4.1% above September 2018.

New orders for manufactured durable goods in September decreased $2.8 billion or 1.1% to $248.2 billion.

Fuel prices continue below the $3 per gallon threshold at $2.72. Gasoline prices for October are 1.6% higher than last month, but 7.4% lower than September of last year.

Oil prices, as measured by West Texas Intermediate crude, have increased 3.82% from last month as of today and are 13.45% lower than the same day last year.

The flashpoint the Straits of Hormuz that we have been expecting for some time, since the Joint Comprehensive Plan of Action (JCPOA) was abandoned, did not escalate in October and remains stable for the time being. But the situation is clearly unpredictable day-to-day.

We think Iran may be awaiting the outcome of the 2020 US presidential elections and now impeachment before taking any new moves. As we have related, Iran runs the risk of a catastrophic war with the USA if it continues its belligerence in the region. The lessening of tensions is reflected in the fleet deployment at October 28th. The USS Abraham Lincoln (CVN 72) CSG is patrolling south of the Saudi Peninsula, the first time in months that the US has not had naval forces deployed closely to the Straits of Hormuz.

Hong Kong remains unstable and even Taiwan is protesting against Chinese authoritarianism. Hong Kong is now in recession and we anticipate that protests will continue. China is, in our view, unlikely to attempt the type of brutal repression we saw in Tiananmen Square a generation ago for fear of US sanctions.

Doing so would exacerbate strained US/China relations even more. Even now, we are seeing bipartisan revulsion at China's brutality and its many violations of fair trade, particularly its thefts of intellectual property. Moreover, Secretary Pompeo's comments earlier this week point to what we believe is the most adversarial tone toward China in at least 30 years. The effect of the change in tone remains to be seen, but we believe the Trump Administration would welcome internally-driven "regime change" from the communist regime in China were it to happen holistically.

As with Iran, we think Xi Jinping and his counselors are awaiting the outcome of the 2020 elections before committing to a permanent trade deal. We do not see one coming before spring or summer of next year.

A Lessening Of Concerns

In earlier months, we had concerns that higher rates and a stronger dollar would impinge developing nations' ability to repay dollar- and euro-denominated debt they owe to American and European banks. Those concerns have been largely allayed by the Fed's rate cuts. Still, the US dollar will be European and Japanese investors' currency of choice as rates in those countries continue to be lower than the US. While the Fed has signaled it will be more dovish, we note, nevertheless, that the DXY:CUR, while having dropped recently, still shows a relatively strong dollar compared to most of the year, largely because there are so few good, growing, stable foreign economies.

With developing economies, particularly India, where the USD:INR exchange rate had ended 2018 at 1:70, we're seeing recovery, presumably because the Fed has pulled back. (The INR traded at its lowest point in history in October, 1:74. As of today, it was 1:70.9). Tensions over Kashmir between India and Pakistan have ramped up, at least rhetorically, as India moved to remove its special status under the Indian constitution. Pakistan's president has threatened nuclear war. The situation there is now at the top of our list of prospective geopolitical "black swans", replacing the Straits of Hormuz.

For July, the latest available data, the TSI printed at +0.7, unchanged from June and up from -0.7 last year. Debt service as a percentage of household debt is moving downward again. We heartened that people are taking home more cash from the 2017 tax cut, so that debt service accounted for a lesser percentage of disposable income. Data for 2019Q2 showed debt service as a percentage of disposable income at its lowest level, 9.969%, since records started being kept 40 years ago. It ran over 13% prior to the Great Recession. (We're still awaiting an update for 2019Q3).

M-2 velocity dipped further in 2019Q3. We would have liked to see the improvement in M-2 velocity that seemed to be on track in 2018. We are disheartened that it continues to fall. We would like to see the Fed stop paying interest on excess deposits to free up cash in the economy, which would boost M-2 velocity, a position we have advocated for some time.

We note these other developments since our September jobs report:

Trimmed mean inflation for personal consumption expenditures, less food and energy, or " Real PCE," for the Dallas Fed is at 1.7% year on year. The real PCE price deflator, reportedly the Fed's preferred measure of inflation, printed at 1.7% for September, 30 bps below the Fed's target.

We would like to see increased growth in Gross Domestic Investment, aside from inventory growth (i.e., in fixed investment) with growth in that component of GDP negative in both 2019Q2 and 2019Q3.

While we agree with the Fed's John Williams that "the yield curve is not a magic oracle" of predicting recession, we believe that the Fed's tightening last year is far more likely to cause recession than President Trump's tariff policy. (Milton Friedman's Nobel Prize would seem to hold with that view, as he blamed the Great Depression on Fed policy far more than the Smoot-Hawley tariffs that have become veritable legend as conventional wisdom and four decades of propaganda promulgated in Paul Samuelson's text in Econ 101 classes at America's leading universities). That said, we're not willing to ignore the "herd instinct" of ignorant investors who buy into the grand lie that "tariffs cause (or worsen) depressions". With Asia and Europe both showing evidence of a slowdown, we think it is vitally important for the finance ministers and central bankers of major economies to agree a strategy to address what we foresee as a very challenging time for the world's economies.

We expect 2019Q4 GDP to print at 1.7 to 2.0 percent, up 20 bps on the lower end from last month's jobs report. The narrow/inverting yield curve, concerns about China and Europe, the continuing uncertainty on Brexit, the situation in Pakistan and India, North Korea's ongoing IRBM testing (it tested another missile toward the Sea of Japan just yesterday), and domestic politics concern us and we advise stop-loss or other hedging in all equities.

For investments, we're inclined to mostly stand pat with these sectors:

Note: Our commentaries most often tend to be event-driven. They are mostly written from a public policy, economic, or political/geopolitical perspective. Some are written from a management consulting perspective for companies that we believe to be under-performing and include strategies that we would recommend were the companies our clients. Others discuss new management strategies we believe will fail. This approach lends special value to contrarian investors to uncover potential opportunities in companies that are otherwise in a downturn. (Opinions with respect to such companies here, however, assume the company will not change). If you like our perspective, please consider following us by clicking the "Follow" link above.

Additional disclosure: The views expressed, including the outcome of future events, are the opinions of the firm and its management only as of today, November 1, 2019, and will not be revised for events after this document was submitted to Seeking Alpha editors for publication. Statements herein do not represent, and should not be considered to be, investment advice. You should not use this article for that purpose. This article includes forward looking statements as to future events that may or may not develop as the writer opines. Before making any investment decision you should consult your own investment, business, legal, tax, and financial advisers.

Follow J.G. Collins and get email alerts
+
Add a comment
Disagree with this article? Submit your own.
To report a factual error in this article, click here.
Your feedback matters to us!