The yield curve still seems to be following the bearish timeline. My axioms here are: 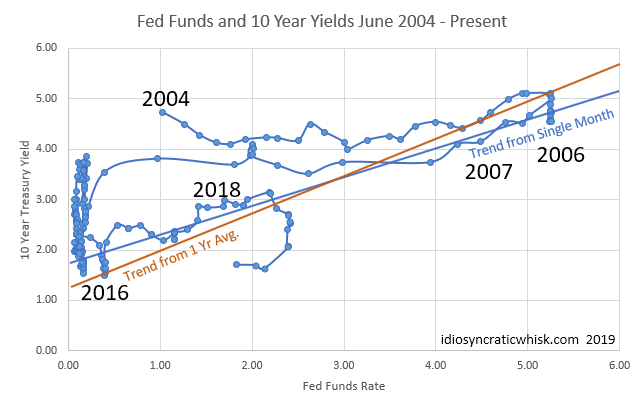 1) The true measure of inversion isn't a slope of zero. At the zero lower bound, it is a slope of a little more than 1% (10 year minus Fed Funds), which declines as the base yield rises. (At about 5%, meaningful inversion happens at a slope of zero, and higher than that, the slope will tend to become more negative the higher yields are.) 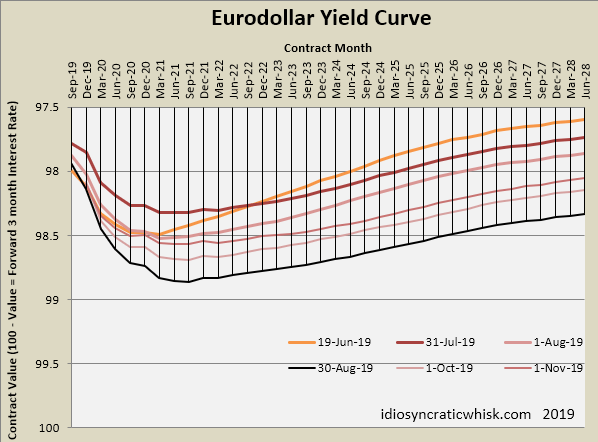 2) The neutral rate is a moving target. If the Fed drops its target rate too slowly, long-term rates will tend to stabilize but not rise, and this usually ends in some sort of contraction. If the Fed gets ahead of the dropping short-term rate, then long-term yields will pop up like they did a couple times in the 1990s, and contraction will be avoided. So, if the scatterplot keeps moving to the left as it did this month, that's bearish. If it moves up, that's bullish.

The second graph is the Eurodollar yield curve, which continues to move up and down a bit but with a negative short-term slope and a pretty flat long-term slope. I expect the short end of this curve to eventually drop below where it was in late August. It will be good news if it doesn't.

Kevin A. Erdmann
195 Followers
As a private investor, I have concentrated on deep value and turnaround microcaps, where illiquid trading markets and reputational risks allow mispricing to be occasionally extreme. Over the past few years, I have developed a radical new macro-level view of the economy. I have found that the housing bubble was not caused by reckless lending or over-investment in housing. Rather, it was caused by a shortage of housing in several important urban markets. The subsequent bust and financial crisis were not inevitable collapses of a demand bubble, but were avoidable and self-imposed consequences of a moral panic about building and borrowing. The key factors providing insights into financial markets going forward are related to the shortage of housing and the disastrous public policy responses to it. This has led to high rent inflation, perpetually tight monetary policy, a divergence of yields between US housing and bond markets, very low rates of new construction, and labor immobility/stagnation.Two books are in the works on the topic.  Here is the first:https://rowman.com/ISBN/9781538122143/Shut-Out-How-a-Housing-Shortage-Caused-the-Great-Recession-and-Crippled-Our-EconomyI am currently a Visiting Fellow at the Mercatus Center at George Mason University.
Follow
1 Comment
To ensure this doesn’t happen in the future, please enable Javascript and cookies in your browser.
Is this happening to you frequently? Please report it on our feedback forum.
If you have an ad-blocker enabled you may be blocked from proceeding. Please disable your ad-blocker and refresh.