MSC Industrial Direct Co. Inc. (NYSE:MSM) is currently trading at $73.68, down from previous highs around $105 back in 2017 and a one-year high of ~$90 last November. While the outlook for the manufacturing sector continues to look weak, recession fears are already priced in to MSM’s stock price. Despite relatively sluggish growth as of late, MSC Industrial continues to generate plenty of cash to sustain it through this current manufacturing climate. A fast-growing yield that currently sits at slightly over 4% and a low payout ratio make MSM one of the most attractive dividend stocks in the manufacturing sector at the moment.

MSC Industrial is a leading distributor of products and services related to the manufacturing industry. The company serves a broad range of customers throughout the United States, Canada, Mexico, and the United Kingdom. Virtually every plant across the country rely on distributors such as MSC to provide replacement parts for machines, as well as other equipment to keep operations running smoothly. While this business model potentially leaves MSM exposed to the trade war on two fronts (increased manufacturing costs and decreased demand from customer companies), this seemingly has been priced into MSM’s stock with the ~30% decline since 2017.

While growth has been nothing special over the past five years, the inevitable end to the trade war should provide the next leg of growth for a company which is currently trading at a trailing P/E of around 14. 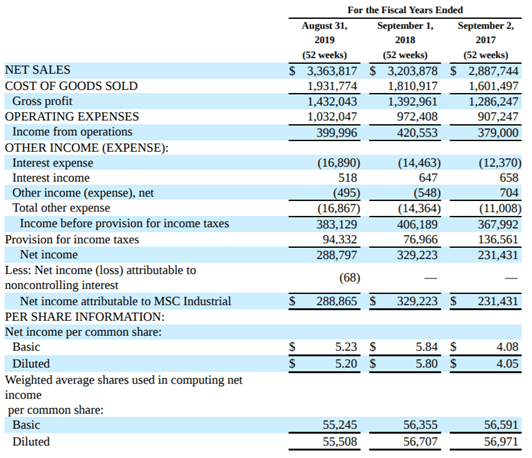 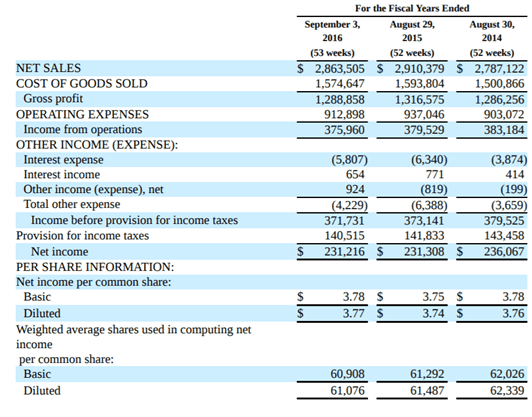 Despite the challenging manufacturing environment that has existed for the past five years, MSM has shown surprisingly strong results. Revenue has grown at a CAGR of 3.7% since 2015, from $2.9 billion in 2015 to $3.4 billion in FY19.

More impressively has been the gross margin improvements during this time of over 12 percentage points, from 45.2% to 57.4%.

While pretax income growth and EBITDA growth have been sluggish at a 5-year CAGR of 0.7% and 1.3% respectively, this is mostly attributable to increased operating expenses over the past three years. Despite this, the company remains solidly profitable, with FY19 pretax income of $383 million with operating margins at 11.89%.

This level of profitability has allowed MSM to buy back around 9.5% of the company’s outstanding stock since 2015. These buybacks should continue to allow for dividend growth going forward, despite the current uncertain economic times. 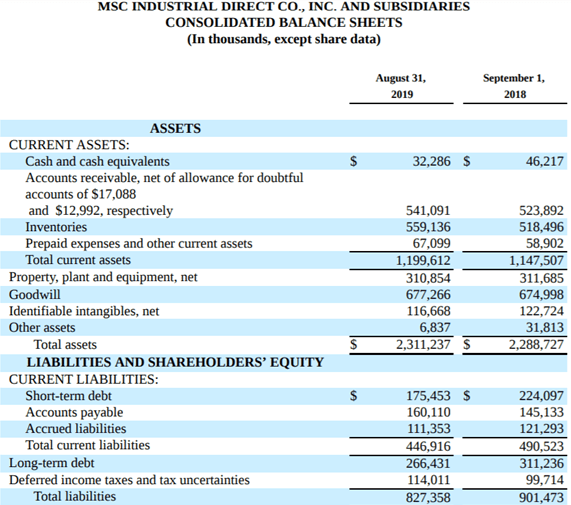 In addition to buying back large amounts of stock, MSM has also made significant balance sheet improvements, putting them in a strong position to weather the current storm. From FY18 to FY19, the company reduced total liabilities by 8.2%, primarily by paying down a large chunk of both short and long-term debt.

With $32.3 million in cash on hand at the end of FY19 and $827.4 million in total liabilities, the company has a net debt/EBITDA ratio of 1.7, making it more than capable of managing debt.

Looking at MSM’s dividend, the company currently pays a quarterly distribution of $0.75, for a forward yield of 4.07%. While this yield is impressive given the current low-yield environment, the dividend growth has been equally impressive at a five-year CAGR of 14.7%. Since 2004, MSM has grown its dividend at a CAGR of ~15%, making it a premier dividend growth stock.

With FY19 diluted EPS of $5.2/share, the company has a current payout ratio of 57.7%, making the dividend more than maintainable. Even during the height of the financial crisis in 2008, MSM remained one of the few manufacturers who did not cut their dividend.

While a prolonged manufacturing slump would likely lead to slower than average dividend increases for the near term, the company should be able to maintain a healthy CAGR over the long term. This is especially true if the ultimate resolution to the trade war is supportive of North American manufacturing, the market MSM primarily serves.

From a valuation perspective, MSM’s shares are currently trading at a trailing P/E ratio of slightly over 14. Compared to a 5-year high P/E ratio of over 25 back in 2017, the company’s current valuation looks relatively cheap.

While MSM currently looks attractive from both a value and dividend perspective, there are still risks to the investment thesis. If the current trade situation with China escalates further, there is a good chance that MSM’s profitability declines as gross margins are impacted. A decrease in production by the manufacturing plants MSM serves as a result of an escalation would also be negative for the company, as demand would decrease significantly. A global recession would also hurt MSM’s profitability, as manufacturing typically slows during recessions.

While the manufacturing sector has been experiences significant headwinds over the past five years, there are still diamonds in the rough to be found. MSM fits this description well, as the company’s strong performance during these challenging times is a testament to the success of the company’s business model, as well as management’s ability to lead the company through the storm. Consistently strong pretax earnings have allowed MSM to continue buying back large amounts of stock at a discounted price, as well as continue growing the dividend at rapid rate. With a current yield north of 4% and trailing P/E ratio slightly over 14, MSM is one of the most attractive stocks from a dividend and value perspective today.