Although the operating cash flow reached a new record high, Sandstorm's cash position has worsened. As can be seen in the chart below, the volume of cash, cash equivalents and short-term investments held by the company decreased from $21.6 million as of the end of Q2 to $19.4 million as of the end of Q3. The decline was caused especially by the fact that under the normal course issuer bid, Sandstorm purchased and canceled approximately 2.4 million of its own shares, worth $13.34 million.

The volume of total debt increased to $40.7 million and the net debt increased to $28.7 million. It is probable that the share buybacks will not continue in the near future, as the shares are not cheap anymore. If Sandstorm manages to maintain the current quarterly EPS also over the coming quarters, the annual EPS will be $0.12. At the current share price of $7.04, the P/E ratio would equal almost 59. And after annualizing the Q3 operating cash flow of $18.2 million to $72.8 million, the price-to-operating cash flow equals almost 17. Although Sandstorm expects the production growth to continue in the coming years, the shares don't look too cheap right now.

Sandstorm expects the 2019 volume of gold equivalent ounces sold to be 63,000-70,000 toz. As 47,716 toz of gold equivalent were sold over the first three quarters, 15,284-22,284 toz gold should be sold in Q4. It is expected that the production at the Aurizona mine will increase, as higher-grade ore should be processed in Q4. Moreover, Lundin Gold's (FTMNF) Fruta del Norte mine should start gold production by the end of this year. Sandstorm owns a 0.9% NSR which should lead to deliveries of approximately 2,700 toz gold per year after the mine reaches full production.

What is positive, Sandstorm's CEO also reiterated the long-term growth targets during the earnings call: 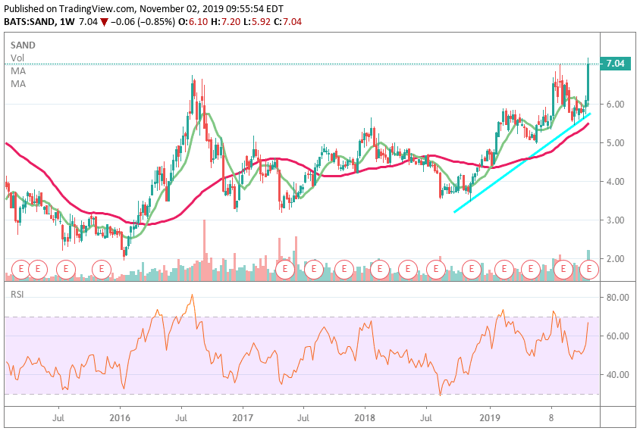 The Q3 earnings release helped to push Sandstorm Gold's share price up to new highs, above the $7 resistance level. Although the RSI is approaching the overbought levels, it still has some room to go. Sandstorm's share price is in an uptrend since late 2018. As can be seen, the pattern of higher highs and higher lows keeps on continuing. Given the positive Q3 results, it is possible to expect the upward movement to continue in the near future. The next resistance level is in the $7.5-8 area, however, its strength is questionable, as it was last tested back in 2014.