And Value for All
1.5K Followers

With retail’s future being one of the most heavily debated topics within the financial community, there has been certainly no lack of coverage for Simon Property Group (NYSE:SPG) on the site. The bellwether mall REIT has been well researched by some of SA leading RE analysts, with the overwhelming majority taking a bullish stance on the name. Those who expressed bearish sentiment in the past have relied primarily on unoriginal media headlines and technical indicators rather than fundamentals.

Yet, performance hasn’t matched the authors’ expectations so far, and the YTD stock return is negative. A headline FFO miss of just $0.01 sent shares briefly tumbling this past week again, when the company reported third-quarter results. It doesn’t matter if this was caused by automated trading or jittery investors with a “sell first, then think” approach. SPG remains a battleground stock and, according to David Simon himself, a contrarian investment:

I mean right now let's face it. We're a contrarian investment, okay. If you look at our multiple compared the kind of most of the other non-retail real estate confidence, and if you look at cash flow stability or multiples or however you want to slice and dice it, we're you know in today's world we're contrary. – David Simon, Q3 2019 earnings presentation

Nonetheless, the company delivered once again impeccable results. Despite a 100-bps impact from bankruptcies, FFO for the quarter was flat year-on-year. The figure was, however, also slightly impacted by changes in internal leasing costs accounting (ASC 842 adoption), and would have otherwise allowed for a 1% increase. The company narrowed FY guidance to $12.33-$12.38, which includes a 33-cent loss on debt extinguishment. The comparable number represents a roughly 2% increase over the $12.13 of FY2018, although Simon once again declared a dividend increase of 5%. While FFO payout has trended upwards in recent years, this shouldn’t cause concern. The lower growth profile is a direct consequence of SPG's choices regarding debt and deleverage.

The latest refinancing terms were undoubtedly impressive. The company completed a senior note offering for $3.5 billion with a weighted average of 15.9 years and an average coupon rate of 2.61%. The new notes allowed Simon to retire senior notes worth a combined $2.6 billion and with an average coupon 115 basis point higher than the new emission. SPG retains over $7 billion in liquidity from a mix of cash on hand, JV cash, and available revolver capacity.

The efforts allowed Simon to reduce its overall weighted average interest rate to 3.37%, down from 3.91% in 2015, and increase years to maturity from 5.9 to 6.6 years. Total leverage was reduced from 5.6x NOI in 2015 to 5.1x NOI and the almost 10% decrease in operating leverage more than compensates for the 6% increase in FFO payout.

I think Simon’s decision to shore up the balance sheet and be selective in new investment opportunities is the right one in an oversupplied environment and will eventually pay off. Analysts do not seem to see growth opportunities in the current climate, as Morningstar Kevin Brown notes: “We believe Simon won't have any acquisition opportunities, as most Class A malls are already owned by long-term investors, but also won't make any major dispositions.” However, SPG's ample liquidity will probably come in handy at some point. Back in February, David Simon stated that SPG, after its botched attempts with Macerich (MAC), won’t make any acquisition.

We tried to do a deal with Macerich a long time ago, and that's, as I've said before yesterday's news. We're glad to partner with them in Carson, which is moving forward and but I'm not going to comment on any deal we may or may not do or any particular company. We have no plans currently to do kind of M&A activity, and we're very focused on what we've got in front of us. – David Simon, Q4 2018 earnings presentation

But the Q&A of the last call finally sang a slightly different tune. David Simon may have dedicated most of the recent years to create a company with a real fortress balance sheet (a definition I find often overused by analysts, but correct in the case of SPG), but he’s still a man very apt to the art of the deal if the proper time comes. While it is highly doubtful that Simon would significantly increase leverage again in a major transaction, the CEO warmed up to the possibility of scooping up assets “at the right price.” Other than only looking at the public market though, Simon briefly but referred to potential opportunities with JV partners suffering “herd mentality” and getting jittery about retail:

If they're nervous, I'm going to buy them at a big discount, so let them get really nervous. I want them nervous, okay. Nervous is good for us. Okay. So that’s okay. The reality is there could be opportunities. But you know, we'll see. – David Simon, Q3 2019 earnings presentation

In the meantime, Simon rolled out a host of small investments in several retailers, including Lifetime, Fitness, Pin Stripes, SOHO, PARM, Sports Illustrated, Allied esports. The disbursements were not material in size, with financing capital coming mostly from the previous Aeropostale deal and other ventures proceedings. Secondly, David Simon clarified that any future mall presence of these partners would only happen with transactions on an arm's length basis and that he expects all the ventures to pay off sometime in the future. Still unaware of the triviality of the cash flow involved, there was a significant critical reaction to the news arising on SA. 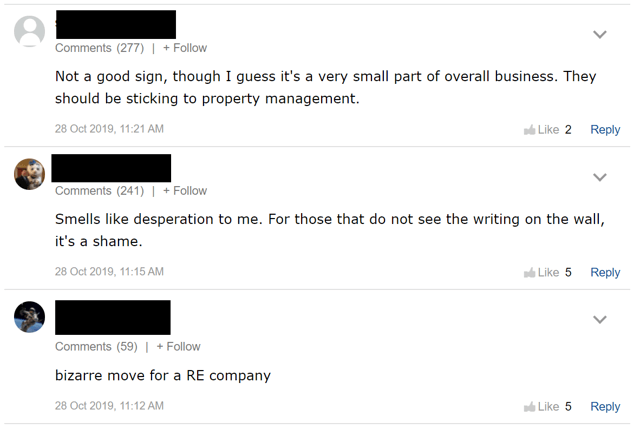 While I think it is positive that the company is taking some proactive steps in the shaping of a possible “mall of the future,” I believe it's even more impressive how financially immaterial news is quickly spun negatively among readers. Such low confidence levels, together with the fleeing institutional money showing herd mentality, gives me even more confidence that the negative sentiment may be approaching its climax.

Hard numbers, however, continue to paint a different story. Simon released another satisfactory quarter, with occupancy once again up sequentially 30 bps and exceptionally high at 94.7%. Re-leasing spreads were up 22.2% down sequentially but above last year’s 13.9%.

While it certainly takes time to re-purpose former big anchor boxes (and occupancy indeed was 80 bps below LY), Simon is benefiting from the transition, NOI was up 1.6% in the third quarter and 2.1% for the nine months. Sales per square foot also increased by 4.5% to $680 psf. Occupancy cost as a percentage of sales also slightly declined to 12.7%. The company also continued stock repurchasing activity during the quarter, buying back approximately 1.15M shares.

At 5.4% dividend yield, Simon remains the highest yielding A-rated US REIT currently available to investors. Within retail-exposed REITs, that’s markedly above the 3.4% of Realty Income (O) and 3.1% of Federal Realty Trust (FRT). It is no question that Realty Income enjoys certain advantages as a triple-net REIT, but the notion that O and FRT are, unlike SPG, e-commerce resistant landlords is spurious and loosely based on measurable facts. Realty Income SSNOI increased far less than SPG by approximately 1.5% in Q1 and Q2 2019, FRT comparable POI metric in Q3 was slightly ahead at 2.1%.

To sum it up, the market continues to show a whole lot of indifference towards Simon, but once again, there was little to dislike in the company’s report. The most notable developments of the quarter concerned debt financing, releasing spreads, and tenant sales psf. FFO growth was a little underwhelming but impacted by one-offs (debt retirement and ASC adoption) and deleverage. Although results have not shown up in the stock yet, I see no reason for investors not to be patient and stay the course.

And Value for All
1.5K Followers
APAC Corporate Financial Analyst (Controller) for a large-cap European company. Part-time investor and passionate about everything concerning finance, I contribute to the site as a hobby and for self-development. Former semi-pro chess player and at high risk of turning into a ski bum (that's why I do not write much during winters...).
Follow

Disclosure: I am/we are long SPG. I wrote this article myself, and it expresses my own opinions. I am not receiving compensation for it (other than from Seeking Alpha). I have no business relationship with any company whose stock is mentioned in this article.