I wrote about Cameco (NYSE:CCJ) relatively recently; the stock was attractive then but would argue even more so now despite a slight increase in the stock price. I primarily base that opinion on the communication from management in the Q3 conference call.

We have seen false starts before in the uranium mining industry, but given the signs management at Cameco is seeing, I think the likelihood is high that Cameco will trading at a very different level one year into the future.

However, should the recovery continue to linger, the downside is still relatively limited for Cameco given the strong balance sheet and positive cash flows.

The interest in long-term contracting and our off-market conversations with some of our best and largest customers continues. We have not seen the current level of prospective business in our pipeline since before 2011.

We also know that Cameco has already signed one long-term contract earlier this year at a favourable rate, so it is not just talk. I have found the communication from Cameco to be very consistent and reliable over the last few years. If the current prospective discussions lead to a couple long-term contracts, it might serve as an incentive for even more of the uncovered demand to come to the market. 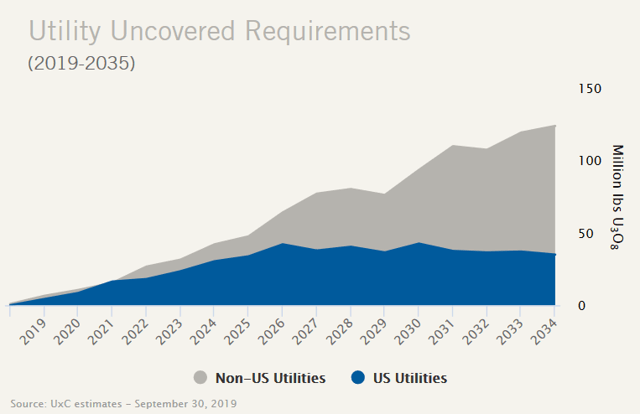 Another point which was discussed during the call was the uptick in fuel services. The impact of the higher fuel services spot prices has less of an impact to Cameco this year, because a very significant portion of fuel services revenues are on long-term contracts. It will likely provide some boost for 2020 and going forward.

The recovery in fuel services should also serve as reminder of how quickly things can turn. The North American spot price was below US$5/KgU two years ago and is now just above US$20/KgU. 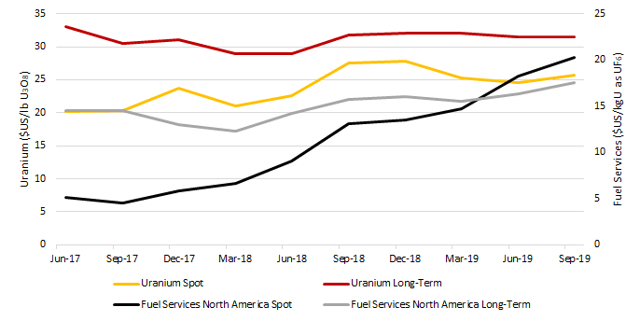 It has been speculated that the restart of McArthur River might prove challenging, due to technical reasons and lack of competence after the shut-down. This was asked during the conference call and was summarily dismissed by the CEO Tim Gitzel.

That would be fake news. I think, if you just check our tech report – technical report on that, there’s an absolute well done summary of mining in McArthur River and it steady as she goes going forward. So there’s no issues there, we would fire up the bus again and continue mining just like we were when we unfortunately had to take it down in 2017.

Cameco has 395.8M shares outstanding as of Q3 2019. 8.7M stock options where the vast majority are out of the money and should be viewed as antidilutive.

The company also has 1.5M executive performance share units and 0.4M restricted share units. Given the latest stock price of C$12.09, we get a diluted market cap at around C$4.9B, but it depends a little on the number of options that are included in the calculation. The impact from the options is relatively minor though.

Total assets are C$7.5B and total liabilities are only C$2.6B, but the potential liability from the tax-dispute with the Canadian Revenue Agency is not included. Given the favourable court ruling last fall, the likelihood of that liability materializing has decreased. The final decision from the appeal is expected in about a year, but that decision can be appealed to the supreme court which could delay a final decision a few more years after that. 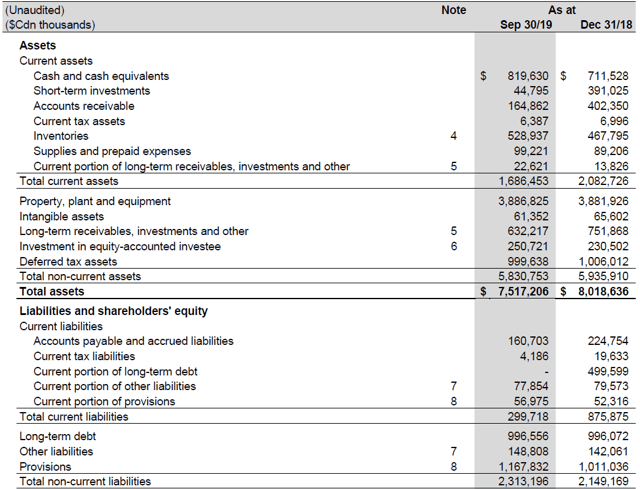 The below table illustrates a few selected financials. Note that I have only adjusted for increases and decreases in short-term investments. There are a few things worth highlighting.

Cameco has solid cash flows despite a challenging market environment. YTD 2019 Investing CF has some decreases in long-term receivables which is skewing FCF upward. However, note that 44-49% of annual revenues are now expected in Q4 first, so FCF YTD has probably also been somewhat muted due to the back-heavy revenues. I would expect FCF for the full year to increase by roughly C$100-200M from the YTD values.

Based on what Cameco has communicated, what we have seen in the fuel services market, and that the decision from the U.S. Nuclear Fuel Working Group will soon be behind us. I think a recovery in the uranium market over the coming year is looking more and more probable.

Given the fact that Cameco can produce an estimated C$400-500M in free cash flow in this market, the upside is very substantial if we see a recovery. Keep in mind that the enterprise value is only C$5B.

The dispute with the Canadian Revenue Agency is of course a concern, but based the most recent court ruling, the likelihood has decreased that the final decision to go against Cameco.

I think the stock offers great upside potential for the patient investor, but I also think the downside is relatively limited unless we have a depressed uranium market persisting for years together with an unfavourable decision in the dispute with the Canadian Revenue Agency. I view the probability of those two factors combined as very low and have been adding to my position over the last few weeks and months.

Bang For The Buck
2.97K Followers
Author of Off The Beaten Path
A cyclical value approach, presently focused on precious metals and uranium

I am always happy to respond to comments and questions in my articles during the first few days. More in-depth ongoing discussions are had inside Off The Beaten Path.

Disclosure: I am/we are long CCJ. I wrote this article myself, and it expresses my own opinions. I am not receiving compensation for it (other than from Seeking Alpha). I have no business relationship with any company whose stock is mentioned in this article.