An earnings season would not be an earnings season without the post-earnings volatility of steel stocks like United States Steel (NYSE:X) and its smaller peer AK Steel (AKS). AK Steel disappointed investors and sold off significantly after earnings while United States Steel added 14.8% after earnings. The company beat earnings expectations and was able to report stable volumes in its flat-rolled segment. The economic environment remains tough, but this company is offering opportunities for traders who like to take risks.

Let's start by discussing two things. First, the business cycle is once again leading earnings. US Steel has seen slower growth since the end of 2018. That's when economic growth in the company's home (and largest) market peaked. Since then, EPS growth has gone from 139% growth to 112% contraction. The just released third-quarter results are the first quarter of contraction since the start of the economic upswing in 2016. That's the bad news. The good news is that adjusted EPS came in $0.07 better than expected, which was one of the reasons why the stock got a relief rally after the release.

In this case, weakness started at the very top as total sales were down 18% to $3.1 billion. This is the second consecutive quarter of declines after 2% contraction in the prior quarter.

With all of this in mind, I care about the reasons behind slower sales. Of course, it is no surprise that sales are down. But it is important to see whether this is due to the inevitable impact from lower prices and/or lower volumes. You probably already know where I am going with this at this point. The company's largest segment (flat-rolled) saw an adjusted EBITDA decline from $392 million in the prior-year quarter to $167 million in Q3 of 2019. The EBITDA margin fell from 15% to 7%. Anyhow, once again there is good news. Shipments in 000s net tons were unchanged compared to the prior-year quarter at 2,654 in the third quarter. September automotive sales beat expectations at SAAR of 17.19 million units while vehicle inventories were stable at 66 days despite the GM strike. Construction was strong as well as non-residential building activities increased by 3% on a month-on-month basis.

US Steel Europe continues to be a different story as shipments fell from 1,101 thousand net tons to 765 thousand net tons. Adjusted EBITDA fell from a $95 million profit in Q3 of 2018 to currently a loss of $23 million. Prices were fairly stable as the decline was less than $20 per net ton to $656 per net ton. The drivers behind slower production and shipments are a weak automotive industry, which was partially offset by a slightly stronger construction sector.

Last but not least, tubular shipments declined from 184,000 net tons to 174,000 net tons as stable oil prices took some pressure off of this segment. Nonetheless, adjusted EBITA fell to a $14 million loss from an $18 million profit in the prior-year quarter.

Overall, the company was mainly hit by lower prices while volumes were down in both Europe and in the tubular segments. In this case, the company only had a $34 million headwind from higher raw material costs in its Europe segment due to higher iron ore prices. Both other segments saw lower costs for steel production which happens fairly often in a scenario where global basic materials are down. On one side it hurts selling prices, while it also eases input costs.

Here's Why Traders Are Buying

One part of the answer to the question, 'why did the stock surge so much after earnings?,' is that earnings were stronger than expected. The other parts is a sentiment shift. By that, I mean that sector rotation is hinting that traders are starting to bet on an economic recovery. This has been going on for a while now, but signs are getting stronger. The graph below shows the ISM manufacturing index and the ratio between industrial stocks (XLI) and the S&P 500 (SPY). It seems that a bottom is in place and further outperformance of industrials should be expected. Note that the ISM index went from 47.8 in September to 48.3 in October. It's bad and still an indication that the economy is contracting. Nonetheless, traders care about trends, and if history is any indication, we are in for an upswing. 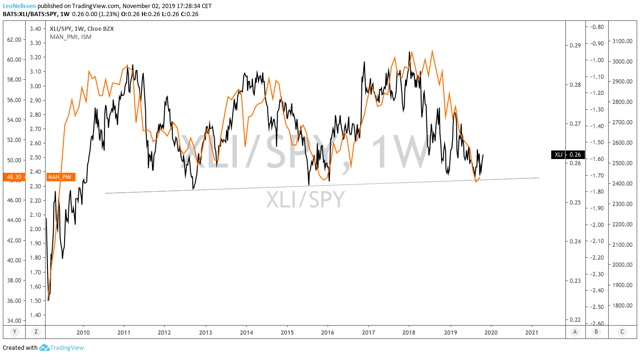 The graph below shows why it matters. Besides that higher economic growth generally speaking supports steel demand, we see that US Steel is a massive outperformer during economic upswings. The post-earnings rally could just be the beginning. 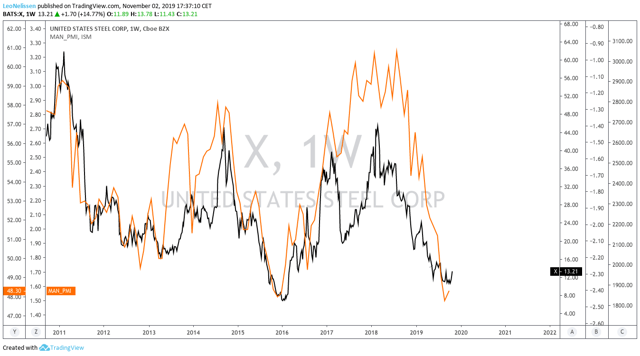 On a side note, it also helps that this company is trading at 2.3x earnings and has a short float of roughly 33%. I get that people are not bullish, but this is the very reason I never wanted anyone to be short during this entire slowing cycle.

United States Steel did not have a great quarter from a business standpoint. Sales, margins and earnings were down as the economy put a lot of pressure on this cyclical company. Nonetheless, traders care about different things as well. In this case, we are witnessing serious signs that the economy could be bottoming. The stock is dirt cheap and one-third of outstanding shares are sold short. Even if you completely disagree with everything I said, I still think bears should either stay far, far away or donate money to charity instead of going short.

If industrials continue to show strength, I think this stock can go to $18 on the mid-term. However, keep in mind that volatility is high, and an economic bottom is not a certainty. As the title says, this is only an option if you are able and willing to take above-average risks.

Personally, and for the sake of my long-term investment, I hope the economy is bottoming indeed. Other than that, I won't be buying US Steel right now to avoid the volatility.