Recently, a young man asked Vanguard founder and investing legend John C. Bogle for advice on how to position his portfolio. After listing a number of specific risks - ranging from income inequality to potential nuclear war - Bogle offered the following response (emphasis mine):

You don’t know, and I don’t know, what’s going to happen in any of them, the market doesn’t know, nobody knows... so what you want to think about is how much risk you can afford.

One of those risks is the current state of the yield curve. Followers of the financial media are only too aware that of late the yield curve has flirted with inversion and, for at least brief periods, has actually been inverted. This phenomenon poses multiple opportunities for risk to a portfolio - ranging from fear of recession to a sudden acceleration of inflation.

It is exactly this risk that a recently launched ETF proposes to address. This is the Quadratic Interest Rate Volatility And Inflation Hedge ETF (NYSEARCA:IVOL). Its creator and portfolio manager is Nancy Davis, a Goldman Sachs alum who currently runs Quadratic Capital Asset Management LLC.

We'll dive into IVOL in just a little bit, but first a little background on the problem, if you will, that it is intended to address.

The Challenges of An Inverted Yield Curve

Simply put, an inverted yield curve represents a phenomenon that is out of harmony with, or runs counter to, normal expectations.

When it comes to fixed-income investments, such as bonds, investors generally demand to paid more for holding a longer-term bond, such as a 10-year Treasury, than a shorter-term bond, such as a 2-year Treasury. The logic for this is simple. First, you are tying up your money for a longer period of time. Secondly, changes in interest rates tend to affect a longer-term bond to a greater degree, making it more volatile in terms of price. 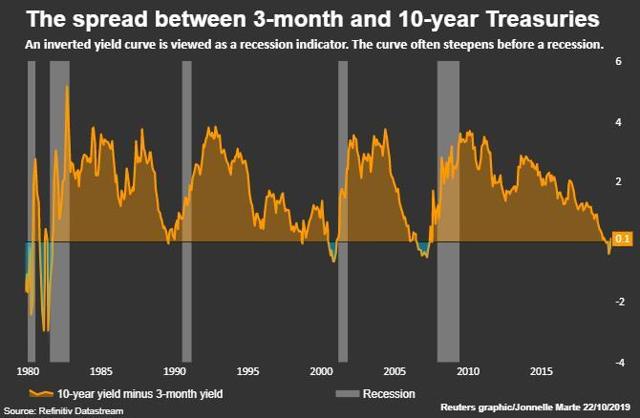 As can be clearly seen, the graphic represents the spread between the interest rate for 3-month treasuries vs. 10-year treasuries, covering the period from 1980 to the present. You can further quickly glean that, for a large portion of that period, you would have received an interest rate between 2% and 4% greater for being willing to hold that 10-year treasury.

What does all of this mean? As can be seen from the vertical grey bars in the above graphic, this phenomenon has often been a predictor of a recession. Why? Because it reflects what might be called cumulative investor belief, represented by the market, that inflation or returns will be lower in the future.

But back to the sentence that started this section. This is not the norm. At some point, the yield curve could start to normalize for any one of, or combination of, a number of reasons. For starters, we have the unusual circumstance of equity markets at all-time highs, the lowest unemployment rate in 50 years, and the Fed still thinking in terms of cutting interest rates!

Possible scenarios moving forward could include:

Further, given where we stand now, there could be a problematic "double whammy" for investors, as both stocks and bonds, particularly bonds with longer terms, decline at the same time.

Enter IVOL - A Hedge Against The Above Scenario

Quadratic Capital Asset Management proposes IVOL as offering a hedge should the "normalizing" of the interest rate curve - by virtue of either lower short-term rates or higher long-term rates - come to pass. How does IVOL propose to do this?

As it turns out, in a relatively simple, yet innovative and completely new, manner.

The simple part? A substantial portion of IVOL's portfolio is comprised of TIPS (Treasury Inflation-Protected Securities). In short, TIPS are Treasury bonds that are indexed to inflation, meaning that the principal value of TIPS rises along with inflation. TIPS also pay interest every 6 months, at a fixed rate established at the bond's auction but which also fluctuates based on the principal value of the bond, rising during periods of inflation and falling during periods of deflation.

The innovative part? Here it is, from IVOL's prospectus (emphasis mine):

Put simply, these are bets on options tied to the steepness of the yield curve. The innovative part? These options, which trade in the OTC fixed-income options market, have in the past typically only been available to sophisticated investors, such as institutional investors. In this ETF, Ms. Davis proposes to "democratize" this ability by making it available to all investors. Long-time ETF Monkey readers are likely familiar with my admiration for the role ETFs play in what I have referred to as the "democratization of investing." 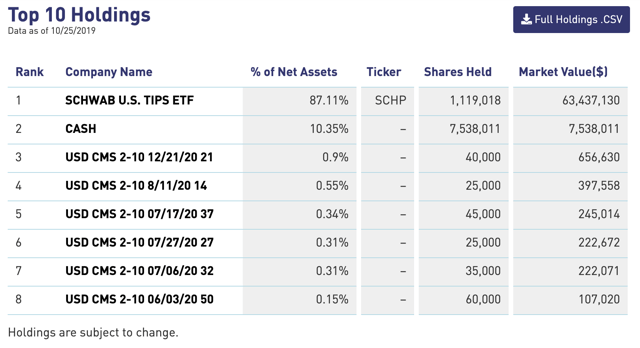 As can quickly be seen, some 97.46% of the fund is held in either TIPS or cash. For the TIPS portion of the portfolio, IVOL reserves the right to invest either in individual TIPS or in ETFs which hold these. At the present time, IVOL is using the Schwab U.S. TIPS ETF (SCHP) as its vehicle of choice for this portion of the portfolio.

I found this of interest, as it is an easy exercise to dig into the composition of SCHP. Here it is: 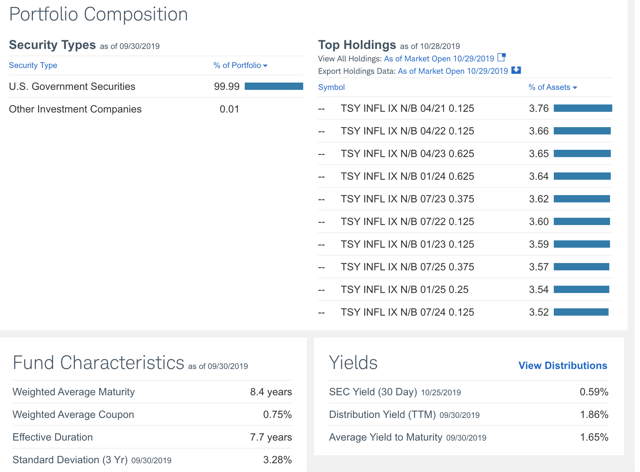 From the above, you are able to get a quick look at the fund's effective duration (7.7 years) and distribution yield.

So there you have it: a fund comprised 97.46% of cash and SCHP, with 2.54% currently allocated to long options tied to the shape of the U.S. interest rate curve.

Gaming Out Some Future Scenarios

In brief, here is how IVOL's founder proposes the ETF as a nice hedging tool for your portfolio in the 3 scenarios featured above:

Next, let's look at the other side of the coin. Under what scenarios might IVOL underperform? Here are two that the fund discloses:

On the other hand, this ETF offers exposure to securities to which the average investor simply doesn't have access. Here's how a recent Forbes article put it:

If you want to duplicate [Ms. Davis's] position in the Constant Maturity Swap 2-10 call due July 17, you’d need to know what banker to ring for a quote, because this beast is not traded on any exchange. Each of these calls, recently worth $7.71, gives the holder the right to collect a dollar for every 0.01% beyond 0.37% in the spread between ten-year interest rates and two-year interest rates. The spread has to move a long way up before the option is even in the money. But at various times in the past the spread has hit 2%. Could it do that again? Maybe, at which point the option pays $163.

Perhaps an even more important question to ponder is, what do you think about scenarios 1 and 2 featured in the article? If you find yourself of the belief that they are entirely possible, IVOL could prove a relatively inexpensive way to hedge your portfolio.

If you find yourself intrigued and would like to hear a little more from Ms. Davis herself, here's a helpful 22-minute audio and slide presentation that may be just the ticket.

Whatever you decide with respect to IVOL, until next time, I wish you happy investing!

Author's note: If you enjoyed this article, please click the "Follow" button to receive immediate notification on future articles.

ETF Monkey
6.39K Followers
Author of Hoya Capital Income Builder
Build sustainable portfolio income with premium dividend yields up to 10%.
I am a recently-retired individual investor and have managed my own investments for over 35 years. My professional background is in the finance area. I believe that the benefits of investing, and the market, should be understandable and available to everyone, including those with little or no financial background. My hope is to explain concepts simply, taking much of the mystery and fear out of the process.  To keep up with my very latest, please subscribe to my Substack newsletter and Twitter feed. In addition to my personal writing, I am a contributing author for Hoya Capital Income Builder.
Follow

Additional disclosure: I am not a registered investment advisor or broker/dealer. Readers are advised that the material contained herein should be used solely for informational purposes, and to consult with their personal tax or financial advisors as to its applicability to their circumstances. Investing involves risk, including the loss of principal.