The spread on the Bristol-Myers (NYSE:BMY) and Celgene (NASDAQ:CELG) deal has been rapidly closing recently. The gross spread is a negative 1.28%. I've written a ton about this deal in the past, and it is my largest M&A position. The spread is finally getting so tight that you need to ascribe value to the contingent value right (aka CVR) or it offers this negative return.

Because of the spread situation, for the first time, I have felt forced to look more closely at the value of this CVR. Ultimately, I find it could be worth around ~$6.48.

What is this contingent value right about?

In the acquisition of Celgene by Bristol-Myers, the latter offers a combination of cash and stock but also a contingent value right for each Celgene share held through the close. The CVR entitles its owner to receive $9.00 in cash upon FDA approval of all these drugs by a certain date:

The slide below shows the latest status on these three therapies (from Celgene's latest presentation): 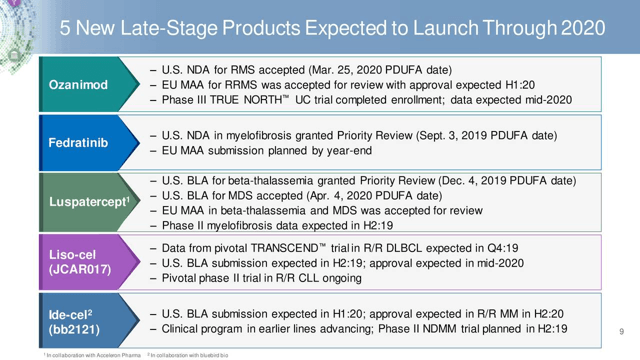 In the Q-10, there are some additional details.

The CVR pays out either A) $0; if any of the 3 drugs fail to get approved in a timely manner or B) $9 if all 3 drugs get approval.

Without in-depth knowledge of biotech, I'm looking at statistical data to get a sense of how likely each therapy is to get approval. The following chart by Alacrita Consulting is helpful to get an idea of the baseline odds of success here: 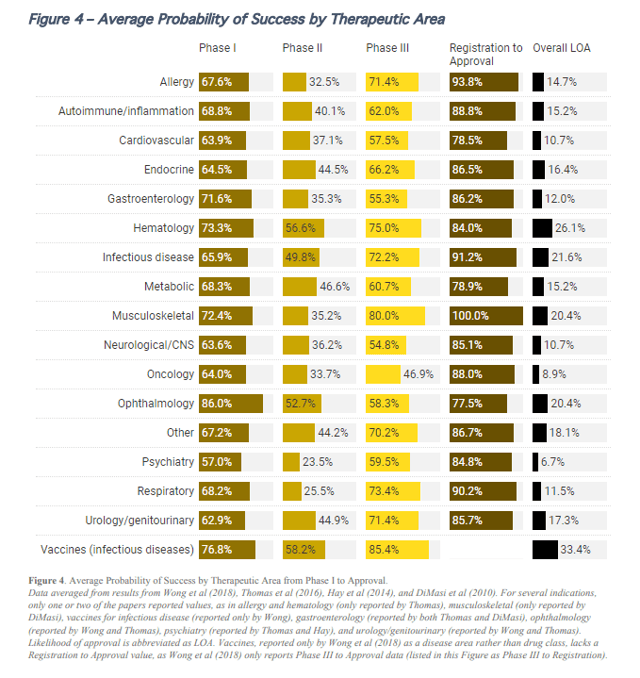 I've made small adjustments to these baselines because of favorable or less favorable factors. Likely, this estimate can be improved upon by taking a more granular view and/or combining it with the expectations of biotech experts.

However, most estimates I see out there seem to lowball the CVR value given the generalized statistical data.

I'm putting Ozanimod on a 94% probability of getting an indication approved. Liso-cel should be at around 88% and bb2121 should be in that ballpark as well. Meanwhile, if any of the phase 3 trials that are tied to the CVR fail, there is still a chance to gain an indication through a secondary path.

The combined probability of any of these failing and no other indication coming through is about 29%. If we don't bother too much with time value of money calculations, the CVR is worth about ~$6.48.

The company also updated on the closing of the transaction, guiding towards end of '19 instead of the end of '19/early '20. As the closing date nears, these estimates should be more accurate but still slightly conservative. I'm inclined to believe this deal is getting rather close to approval.

Because I ascribe a relatively high value to the CVR compared to other analysts and commentators, I rate this deal relatively high. Even now, with the gross spread slightly negative this offers an astounding expected value. This far in the process, there is little left that can derail the deal. There's nothing that I expect to act as a hold-up. Therefore, I estimate it will close (99% chance) before year-end as management says with low odds of a blow-up. The break value should be around $60. This gets me to an expected annualized return of ~76%. That suggests I'm probably optimistic somewhere. Admittedly, there's a lot of uncertainty to the value of the CVR. It is probably a great deal, but maybe not THAT great. However, this kind of expected value leaves some room for error. After doing this review, I'm confident enough to hold Celgene even with a gross negative spread, but I can't fault anyone for taking some chips off the table, given the negative spread and uncertainty around the CVR's value.

Check out the Special Situation Investing report if you are interested in uncorrelated returns. We look at special situations like spin-offs, share repurchases, rights offerings and M&A events like Celgene. Ideas like this are especially interesting in the current late stages of the economic cycle.

Bram de Haas
16.85K Followers
Author of Special Situation Report
Professional risk-taker focused on smart bets and risk control.
15 years of investing and I feel like a rookie in his first year at the academy. My roots are in the value school but over time I've learned to respect different approaches. I'm interested in what quants do, options traders do, and even what WallStreetBets is doing (keep your friends close and...)

Disclosure: I am/we are long CELG, BMY. I wrote this article myself, and it expresses my own opinions. I am not receiving compensation for it (other than from Seeking Alpha). I have no business relationship with any company whose stock is mentioned in this article.

Additional disclosure: I ceased hedging out BMY fully as I think it is quite attractive.