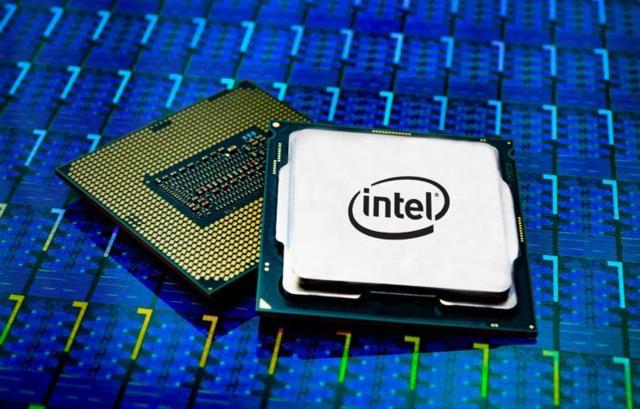 Using Wall Street analysts’ words, Intel's (NASDAQ:INTC) 3Q earnings results (ER) have been "reinvigorated and reaccelerated" (JPMorgan (JPM) and Bloomberg). Benefiting from a strong server datacenter demand, Intel has delivered a much better-than-expected 3Q earnings performance. A dual of strong commercial/gaming and cloud/hyperscale spending reacceleration fueled a 28% Q/Q Data Center Group (DCG) revenue growth, which is expected to persist into 4Q. The surprising growth from the DCG is especially encouraging since previous trend suggests that the duration of the strong datacenter demand trends could last 4-6 quarters. Also thanks to the continued pricing strength, PC CPU ASPs were up over 3% and the server ASPs were up 9% year to year. The uptick in ASP and the shift to high-end processors more than offset the overall industry-wide PC unit declines.

These good news allowed Intel to raise both 4Q revenue and EPS guidance. Contrary to previous estimates, Intel’s 10nm Ice Lake notebook platform has performed fine, while the high-end processors have benefited from the commercial and gaming growth. PC client unit volume is still expected to grow a double-digits % in 2H 2019. Intel remains on track on launching 10nm server products next year and 7nm products in 2021. The unintended yet pleasant consequence of an unexpected higher demand along with the continued CPU shortage may drive Intel to increase capital expenditure.

Obviously, fixing the current CPU supply shortage is Intel’s near-term priority, and launching the delayed 10nm chip to combat Advanced Micro Devices’ (AMD) 7nm is the midterm challenge. While Intel has enjoyed a near-monopoly in corporate server and datacenter sales for years, the corporate IT and cloud service provider's recent spending cut is not confined locally but felt through the entire supply chain to memory chipmakers like Micron Technology (MU) and TSMC (TSM). In the long term, Intel will invariably lose server market share to AMD's EPYC and Qualcomm (QCOM) and Cavium's ARM-architecture-based chips, although the company feels confident of its Xeon-SP and Purley-architecture-based data-center portfolio.

That being said, in the tech world, long term is anything over one quarter. Since technology dynamically changes by the day, speculation on a product over a quarter or two becomes impractical. For professional Wall Street analysts who are more technologically trained and often have private information through personal contacts, they often couldn't even predict the current quarter earnings announcement. It is, therefore, irresponsible to estimate the future stock prices beyond the points which are backed up by financial forecasts. As Intel just had a surprising 3Q ER, it may be time to re-examine Intel’s new target prices.

From many previous posts, Intel's stock prices are known to react to analysts' forecasts of future revenue, EPS, gross margin, free cash flow, and capital expenditure, where forward estimates are denoted by the dotted lines (Figure 1A - Figure 1E). In order to estimate how Intel's future price will move, it is necessary to find the future relevant financial metrics which drive the share prices. To this end, I used the analysts’ consensus of forward estimates of each metric. Specifically, maybe reacting to the uncertainty of datacenter growth and gaming recovery, or amid AMD’s threat on server market share, the analysts community has been neutral in most financials. Both revenue growth and EPS growth have been assumed flat for the next two years (Figure 1A and Figure 1B). Intel may feel that the current high ASP strategy cannot be sustained in the long run, so the forward gross margin has shown a marked decrease after 2020 (Figure 1C). 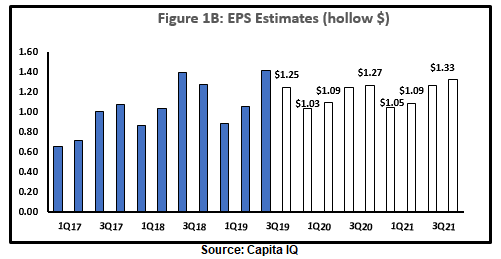 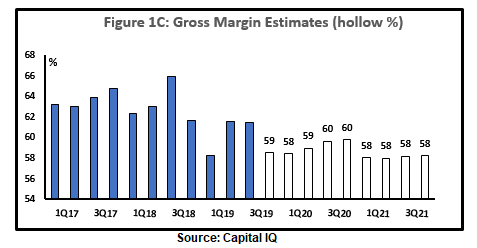 Another interesting sign is that, different from many other tech firms, Intel chooses not to lower its capex after 2019 (Figure 1E) to combat the problems of decreasing cash flow or slower revenue growth.

It appears that Intel’s eventual “bite on the 7nm bullet” can be observed by the stable and high level of capex as well as the fluctuating level of free cash flow (Figure D and Figure E). It is also worth noting that share prices have been mainly positively associated with all five positively trending financials since 2010. Most future financials (dotted line) are expected to improve due to the anticipated relief of the trade dispute, an ease of Fed's policy, and a lesser concern of forthcoming global recession. However, after Intel started losing some CPU market share to AMD, it appears that the stock prices have started paying more attention to future revenue estimates than other financial metrics (Figure 1A). Another good sign is that, different from many other tech firms, Intel is not expecting to lower its capex after 2019 (Figure 1E) to combat the problems of decreasing cash flow or slower revenue growth, which it does not have (Figure 1A and Figure 1D). 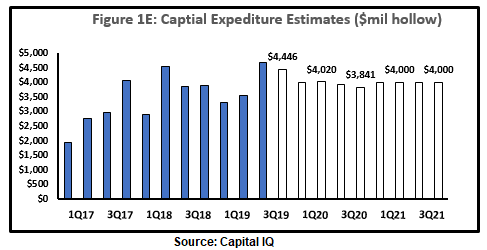 The reason why I demonstrated various analyst consensus estimates on various metrics is because forward Intel prices are invariably affected by these fundamentals. The message from the positive relationship between forward financial estimates and stock prices should give investors more comfort, since it suggests that Intel's stock prices have reflected underlying fundamentals after all. Since Wall Street analysts, as a group, tend to give forward estimates routinely many quarters into the future (till 4Q 2021), it may be informative to investors if future Intel prices can be estimated with the corresponding forward financial forecasts. For this purpose, I first used last 10 years’ worth of financial data to find such a relationship (multiple regression). A simple interpretation of this historical relationship can be explained like a formula that the current target price can be calculated by the current estimates of the five financial metrics under consideration. So if this process has merit, say, the expected 1Q 2020 Intel share value may be calculated by the current estimates of the five metrics for 1Q 2020.

In Figure 2, I showed how Intel price targets derived by this procedure should have looked like (in red), compared with the actual Intel stock prices (in black) over the long run. Since 2015, Intel's actual stock price has moved closely with the fundamental forecast price. This would give me confidence about the validity of the assumption that investors did look at these forward fundamental metrics in pricing Intel shares. In a further close-up, I showed the future quarterly target prices in Figure 3 and Table 1 from 4Q 2019 through 4Q 2021. They predicted Intel price moves from $56 at 3Q 2019, $65 at Q1 2020, to $70 by 3Q 2021 (the red dotted line). It should be clear that Intel’s shares exhibit less than exciting appreciation in the next two years, reflecting mainly the unexciting revenue and EPS estimates, as well as the leveling capital expenditure. 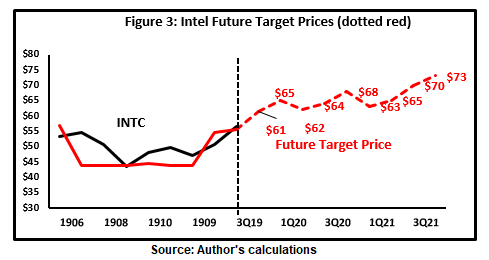 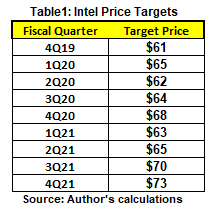 The good news in Intel’s 3Q results includes the surprising but important datacenter growth, which is considered the beginning of a 4-6 quarters’ uptrend. The rising ASPs also help offset the decline in overall PC unit. Looks like Intel still benefits more from the total revenue increase, despite the continued loss of market share to AMD. At this point, there is some optimism to temporarily ignore Intel’s structural difficulty to move from 14nm to 10nm, and to 7nm eventually. That being said, the 3Q win does not look like a game changer as the Street has not completely reflected the improved outlook in its long-term forecasts. Using the current forward estimates, Intel’s share price looks to rise to high $60s by 2020 and low $70s by 2021.

Kwan-Chen Ma
11.99K Followers
K C Ma, Ph.D, CFA, is the Eminent Scholar and the Mary Ball Washington/Switzer Brothers Endowed Chair of Finance at University of West Florida. I am the Director of Argo Investments Institute which enables college students to manage real money stock, bond, and option funds. I manage market-neutral institutional hedge funds in KCM Asset Management. I write about stocks, bonds, and derivative strategies, long or short, based on our quantitative processes.
Follow

44 Comments
To ensure this doesn’t happen in the future, please enable Javascript and cookies in your browser.
Is this happening to you frequently? Please report it on our feedback forum.
If you have an ad-blocker enabled you may be blocked from proceeding. Please disable your ad-blocker and refresh.