Equities in the United States edged out the rest of the world for the trading week’s performances ended Friday, November 1, based on a set of exchange-traded funds that represent the major asset classes.

In a week that witnessed rallies in most of the global markets, the Vanguard Total Stock Market ETF (VTI) took the lead over the rest of the field. VTI rose 1.6%, or slightly ahead of last week’s second-best performer: foreign stocks in developed markets via the Vanguard FTSE Developed Markets ETF (VEA), which climbed 1.4%.

The top-performing bullish momentum in the US is also conspicuous on a longer-term basis relative to the rest of the world, The Wall Street Journal notes today. “Global stocks are lagging behind US shares, illustrating how investors’ faith in the domestic economy continues to drive a growing divergence in financial markets,” the Journal reports.

Foreign equities, however, are playing catch-up lately. Although VEA lags VTI this year, over the last month foreign stocks in developed markets have outpaced US shares by a small margin. A strong rally in VEA on Friday lifted the fund to its highest close in well over a year.

The broad-based rally continued to lift an ETF-based version of the Global Market Index (GMI.F). This unmanaged benchmark, which holds all the major asset classes (except cash) in market value weights, rose 1.2% last week - a strong gain that marks the index’s fourth straight weekly advance. 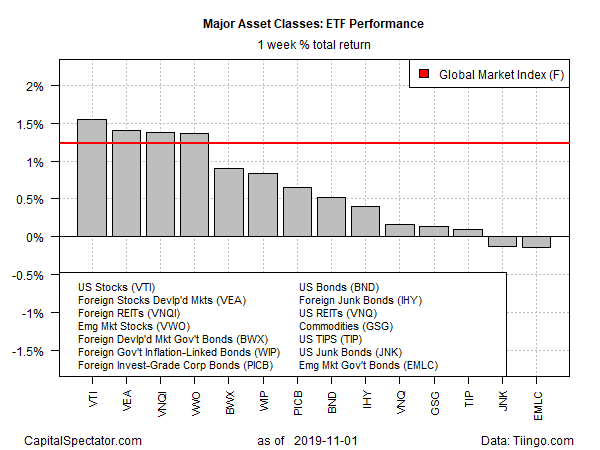 For the 1-year profile, US real estate investment trusts continued to lead the major asset classes by a comfortable margin. The Vanguard Real Estate ETF (VNQ) was up 24.8% on a total return basis for the trailing 1-year window at Friday’s close (based on trailing 252 trading days).

Broadly defined commodities remain in last place for the 1-year change. The iShares S&P GSCI Commodity-Indexed Trust ETF (GSG) has lost 8.5% over the past year.

Meanwhile, GMI.F’s trailing 1-year period has accelerated recently, and the benchmark is now up a sizzling 12.9% vs. the year-ago level after factoring in distributions. 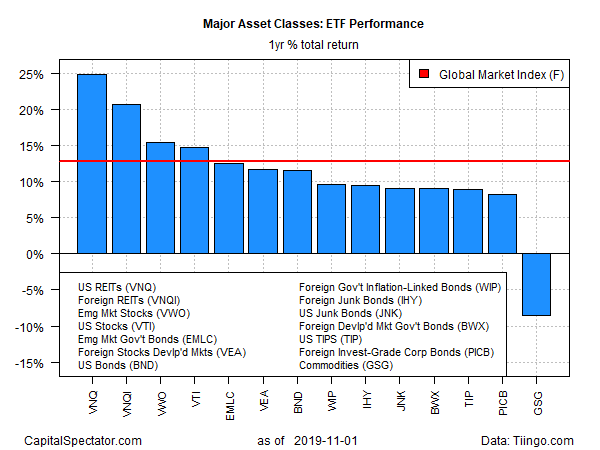 Reviewing all the ETFs listed above through a momentum lens continues to reflect a strong upside bias in most markets. The analysis is based on two sets of moving averages. The first compares the 10-day moving average with its 100-day counterpart - a proxy for short-term trending behavior (red line in chart below). A second set of moving averages (50 and 200 days) represent the intermediate measure of the trend (blue line). At Friday’s close, a bullish tailwind was priced into nearly every component of the major asset classes. 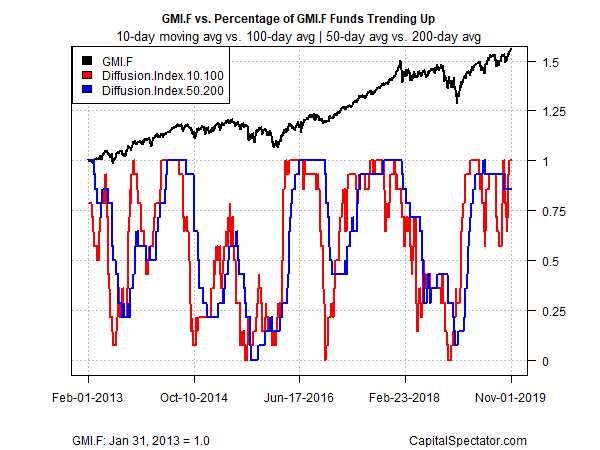 James Picerno
5.61K Followers
James Picerno is a financial journalist who has been writing about finance and investment theory for more than twenty years. He writes for trade magazines read by financial professionals and financial advisers. Over the years, he’s written for the Wall Street Journal, Barron’s, Bloomberg Markets, Mutual Funds, Modern Maturity, Investment Advisor, Reuters, and his popular finance blog, The CapitalSpectator. Visit: The Capital Spectator (www.capitalspectator.com)
Follow
1 Comment