Grain prices should continue to trade sideways/range-bound with a multitude of variables weighing. 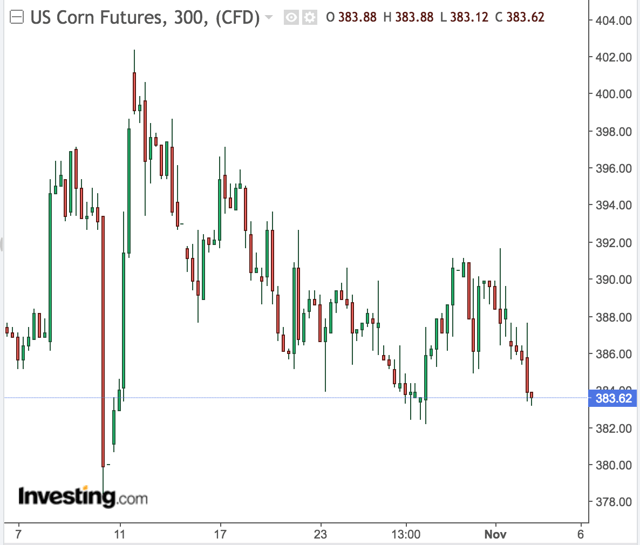 Figure 2 below is a price trend chart of the front-month November futures contract for soybeans over the past month. 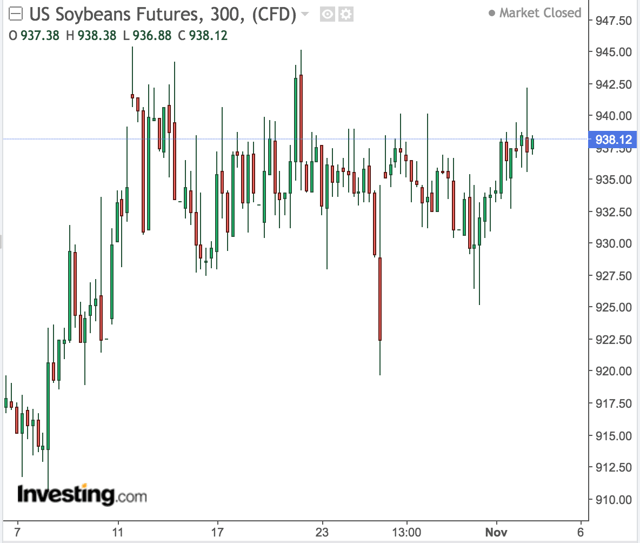 Figure 3 below is a price trend chart of the front-month December futures contract for wheat over the past month. 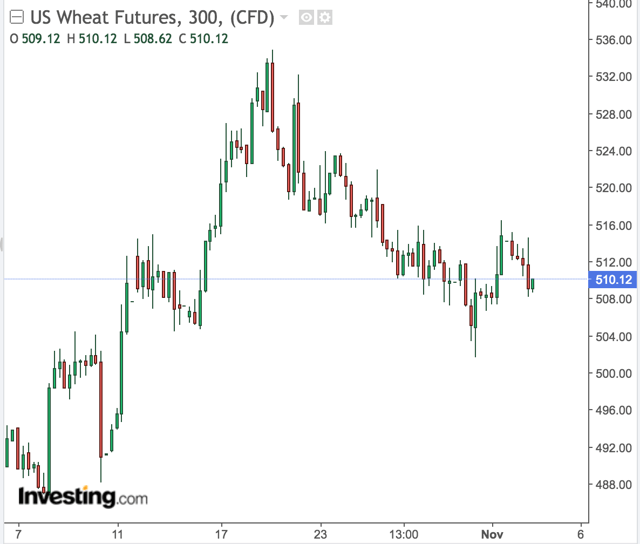 On Monday, the December Chicago Soft Red Winter Wheat (SRW) futures were seen down 5.6 cents to $5.102, with December Kansas City Hard Red Winter Wheat (HRW) futures down 2.6 cents to $4.232. MGEX's Hard Red Spring Wheat (HRSW) December contract was down $0.070 to $5.242. Further down the strip, the March contract was down $0.066 to $5.412. Figure 4 below is a price trend chart of the front-month December futures contract for spring wheat. 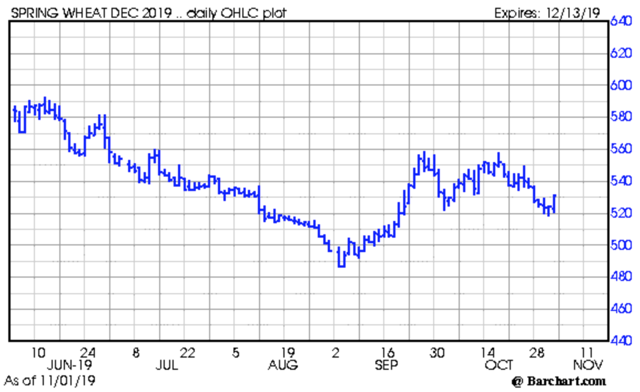 Figure 5 below is Monday's grain inspection chart for the week ending October 31, 2019. 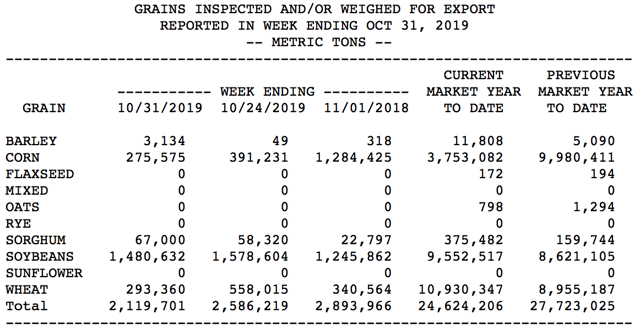 Corn and soybean harvest improves to 52% and 75%, respectively; winter wheat planting in good condition as weather is not presenting much challenge

On Monday afternoon, the USDA issued its weekly crop progress report. The report showed that as of November 3, corn matured was at 96%. Corn harvested is at 52%. That's behind both last year's 74% and the 5-year average pace of 75%. Of the corn planted, 58% is in good-to-excellent condition. That compares to 58% a week ago and 68% last year. Figure 6 below is a graph comparing the years (from 1995) of the corn progress in the harvested phase of development. 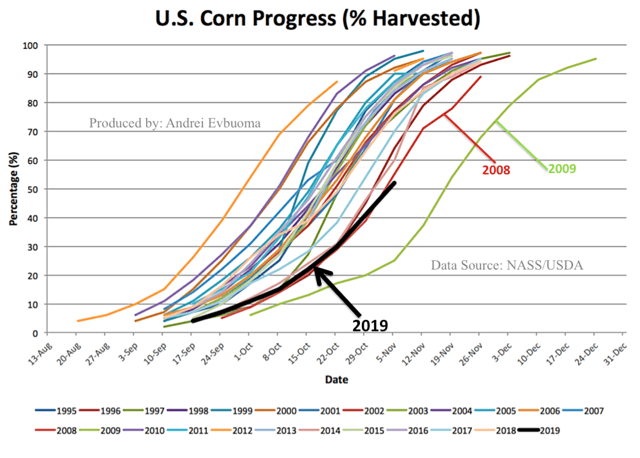 Other crops of note from Monday's report include:

Here is the link to this week's USDA's Crop Progress Report.

Relentless barrage of cold air intrusions expected across the eastern half of the nation over the next 15 days; record cold possible and increasing snow chances likely

Forecast models remain mixed on the evolution of the pattern in the 11-16 day time period. The GFS continues to be the most aggressive in keeping the cold pattern in play, while the ECMWF is the least aggressive with the cold and, in fact, breaking down the pattern faster than the GFS. The Canadian/CMC model sides more with the GFS model. Overall, the outlook over the next two weeks has trended colder over the weekend. The eastern Pacific/western North American ridge has proved resilient and continues to do so. This feature will continue to give way to persistent downstream troughing over central and eastern Canada/U.S. A large and deep upper-level vortex rotating over central Canada is associated with this upper-level trough and will support a perpetual/incessant northwest flow pattern of clipper systems and subsequent reinforcing shots of cold air over the central and eastern U.S.

This will ultimately result in colder-than-average temperatures across the eastern half of the country for the balance of the next couple of weeks. The coldest of temperatures will be found from the northern Plains to the Upper Midwest/Great Lakes to the northeastern U.S. There will be several waves of cold shots coming in, but the most noteworthy/more anomalous cold air intrusions look to occur during the second half of this week Wednesday through Saturday (November 6-9) and then again Monday through Wednesday/Thursday (November 11-14) of next week. Figure 7 below is a map from the 18z GFS ensemble depicting the 1-6 day (November 5-10) temperature pattern. 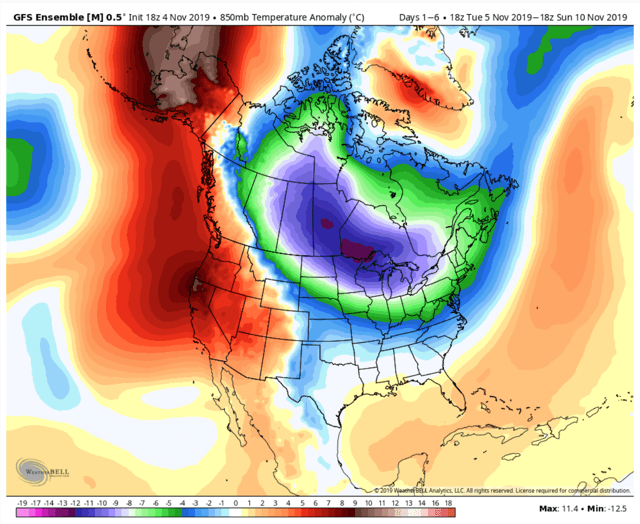 Figure 8 below is a map from the 18z GFS ensemble depicting the 7-12 day (November 11-16) temperature pattern. 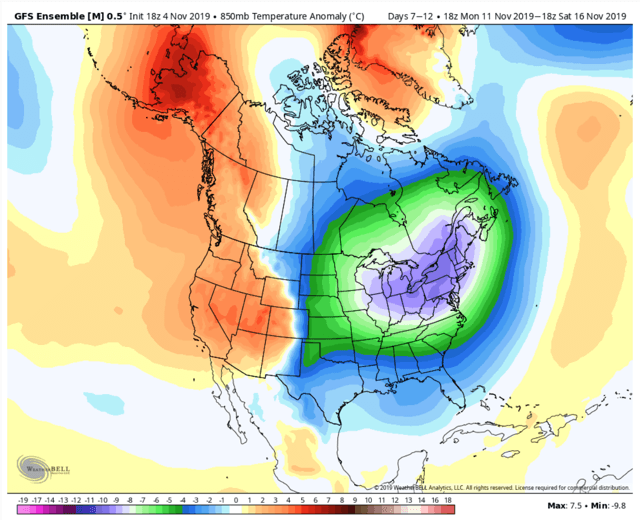 The cold pattern will come with multiple clipper systems traveling over the northern sections of the country, but with limited moisture source will not pose any heavy/notable precipitation amounts. So, despite a fairly active pattern across the northern sections of the grain belt over the next 7 days or so, precipitation levels will run normal to drier than normal across most locations. Figure 9 below is a map showing the seven-day accumulated precipitation forecast (Monday morning to next Monday morning) across the Lower 48. 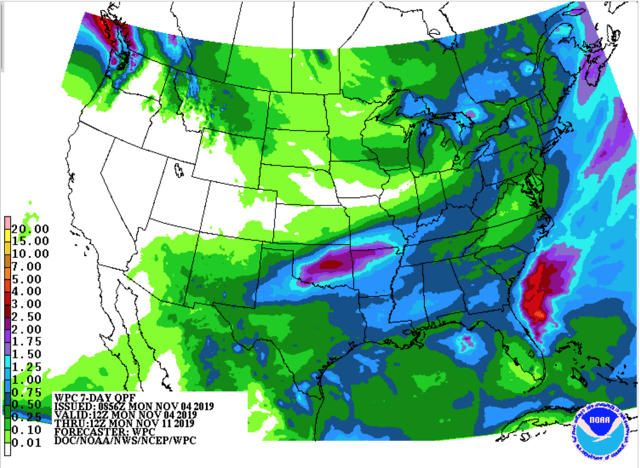 Figure 10 is a map from the 18z GEFS depicting a normal to drier-than-normal pattern across much of the country in the 2-8 day time frame (November 5-12). 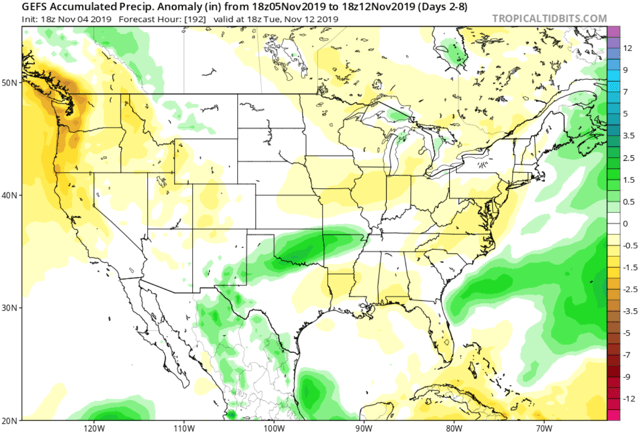 The latest crop progress report revealed that just over half of corn have been harvested and about 60% of corn are in good-to-excellent condition. Soybeans are a little better, with three-fourths of the crop having been harvested. Overall, the report was not a terrible one despite being behind the 5-year average. It's clear that the northern sections/states of the corn and soybean belt are struggling the most due to the recent bouts of cold and wintry weather. The cold pattern will remain in place over the next couple of weeks, which will continue to have potential negative impacts on the crops. Given the progress however of corn and soybeans, the effects that weather will have on these crops will decrease as time goes on. That said, support to the upside will continue to remain, though to a lesser degree than precious weeks. Look for grain prices to trade sideways with export data, inspections, crop progress, weather, and trade weighing.