Investors who own higher-risk/higher-return assets generate an order of magnitude greater wealth over time than savers who own lower-risk/lower-return assets. (In econo-speak, saving and investing are the same thing, but here "saving" refers to stashing one's money in an asset of stable value and relatively low return like a savings account or certificate of deposit, while "investing" refers to owning assets of fluctuating value but generally higher returns such as stocks or real estate.)

Boomers, on the whole, have demonstrated a greater risk tolerance for investments, while Millennials tend to prefer risk-averse methods of saving.

As Boomers retire and need cash, they will need to sell stocks in the coming decades (as they have been, on net, in the last decade). And as Millennials advance in their careers and inherit the wealth of previous generations, they will need to decide how to save/invest that money. Thus far, they have demonstrated a greater preference for savings accounts than stocks.

In other words, both of the Fed's primary policy tools - ultra-short interest rates and quantitative easing - have compounded wealth inequality.

This has left Millennials and those hoping to achieve upward mobility in a difficult spot: savings accounts yield less and less (typically a negative inflation-adjusted yield), while assets like stocks and real estate are richly valued such that upside is relatively minimal. The strong tailwind of falling interest rates that have benefited the Boomers and the wealthy over the last four decades appears to be petering out as rates approach (or, in some countries, have already plunged through) zero.

Thus, young adults and the non-wealthy have been hurt by expansionary central bank policies, while older generations and the already-wealthy have benefited from them. This has exacerbated wealth inequality and also, to a lesser extent, income inequality.

It turns out that, to some extent, billionaires are a policy failure. But they are a failure of monetary policy, not of tax or fiscal policy.

A return to market-determined interest rates that float according to supply and demand would, over time, return rates to a historically normal range that doesn't do overwhelming benefit or harm to any particular income-level or generation, but that outcome is extremely unlikely. In lieu of this reform, investors should prepare for a near to intermediate future in which rates hover around zero, whether slightly above or slightly below.

Only sustained "helicopter money" or a substantial move toward embracing Modern Monetary Theory would be likely to spur a significant rise in inflation and thus also in interest rates.

Having grown up during the Great Depression, the "Silent Generation," along with a portion of the preceding "Greatest Generation," displayed a significant conservatism toward the stock market. The 1952 Survey of Consumer Finances conducted by the Federal Reserve (as reported by an American Bankers Association study) found that "most individuals prefer assets of fixed money value, such as savings accounts, to common stocks and other assets of fluctuating value."

Unsurprisingly, this preference was motivated by a desire for safety, liquidity, and convenience. This at a time when the real yield on savings accounts was positive but not particularly high (1-2%).

According to Investopedia, "only 7% of middle class households in 1954 told a Federal Reserve survey that they preferred to invest in stocks rather than savings bonds, bank accounts, or real estate."

Having lived through the longest bear market in American history, who could blame them?

Millennials Are Largely Sitting Out The Asset Boom

Millennials, too, are particularly conservative investors, having lived through the Great Recession in 2008-2009. A 2018 UBS study notes that this generation invests like their grandparents' generation (the Silent Generation), both of whom witnessed the devastating effects of violent bear markets.

"Volatility has made them savers, not investors," UBS reports, "holding nearly twice as much in cash as any other generation."

Like the Silent Generation, known for keeping quiet and working hard, Millennials are more likely than the generations following and preceding them to view hard work as a key to success. However, they are only about half as likely to say that long-term investing is key to success: 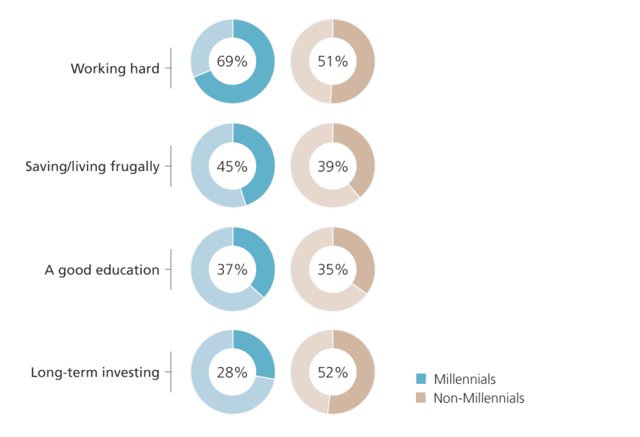 According to a Broadridge Financial Solutions study of Millennials:

About a third of Millennials have expressed no interest in saving or investing through a retirement account at all. Half contribute to an employer-based retirement savings plan. Only 8% use a non-workplace, tax-advantaged savings vehicle such as an IRA.

Perhaps as a consequence of rich valuations in the US stock market, Millennials appear somewhat more interested than other generations in private businesses/private equity and international investments. Also, they are much more likely to opt for a robo-advisor service than traditional wealth management or a discount brokerage. 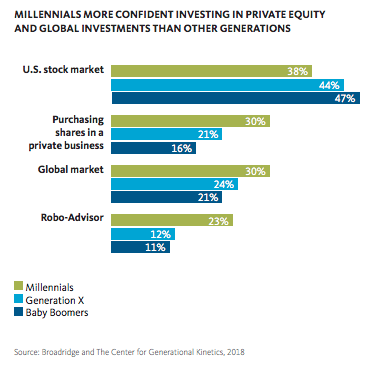 According to a July 2018 Bankrate survey, Millennials do invest in stocks more than they like to admit (and data from the Survey of Consumer Finances via MagnifyMoney confirms it), but their preference is for the safety and liquidity of cash.

According to the 2014 UBS Investor Watch, Millennials have much higher cash allocations than non-Millennials: 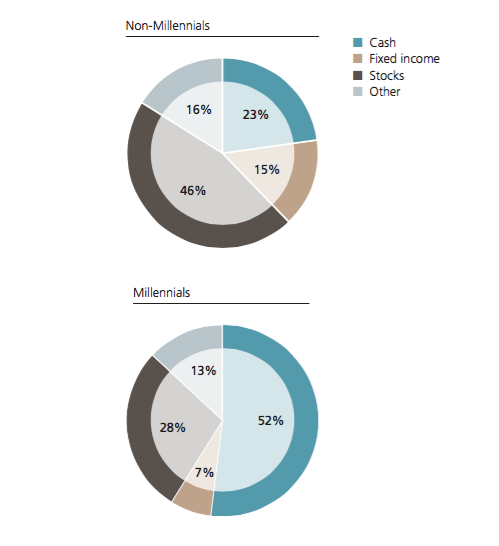 The Millennial distrust of stocks actually fits into a trend of each generation getting less and less enthusiastic about that asset class. But living through the Great Recession has pushed Millennials to favor cash as a long-term investment over stocks or anything else.

That's right - cash. As a long-term investment. With yields in the low-single digits for all of Millennials' adulthoods. It doesn't make much sense. Compare this to Americans as a whole, who in 2018 ranked stocks as the best long-term investment, followed by cash.

2018 - Best Investment For A Ten-Year Horizon 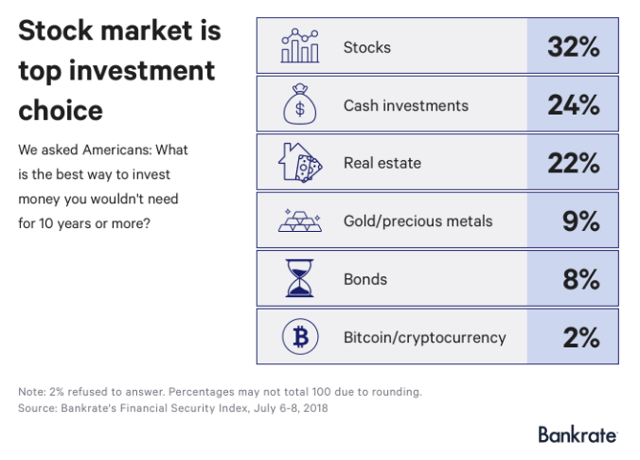 It's important to remember that many Americans will never be comfortable with higher-risk assets like stocks and real estate, whether due to lack of understanding, lack of investable funds, lack of risk tolerance, or mere disinterest.

On the surface, it appears that Americans have developed a higher risk tolerance from 2018 to 2019, as real estate has overtaken both stocks and cash as the favorite long-term investment.

2019 - Best Investment For a Ten-Year Horizon 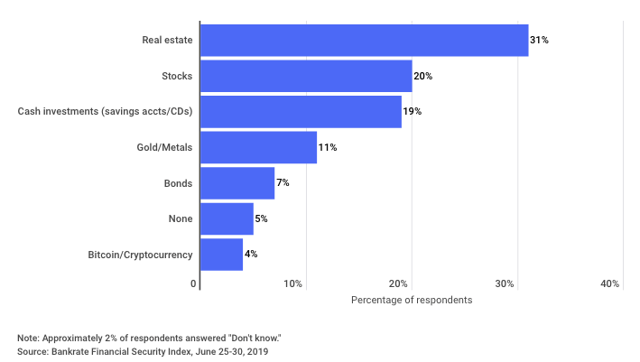 However, this shift is most likely fueled by the falling mortgage rates that have spurred Americans to buy homes or refinance their notes.

Most People Are Risk-Averse

For most people, losses are more painful than gains are pleasurable. Tory Higgins of Columbia University says that this risk aversion is brought on less by paranoia than it is by a desire for stability and predictability. "Higgins calls this a prevention focus, associated with a robust aversion to being wide-eyed and optimistic, making mistakes, and taking chances." These prevention-focused individuals "prefer conservative investments to higher-yielding but less certain ones."

Risk-averse individuals were actually more likely to choose the riskier, higher reward option than risk-tolerant individuals. Why? Because those individuals felt a stronger desire to get back to even. "In other words, prevention-focused people generally prefer the conservative option when everything is going according to plan, but they will embrace risk when it’s their only shot at returning to status quo."

When normalcy is on the line, the risk-averse can be persuaded to embrace risk. But, crucially, the motivation is desperation rather than riches. This explains the shift into stocks in search of yield (2nd chart below) as bank savings vehicles offered less and less income (1st chart below): 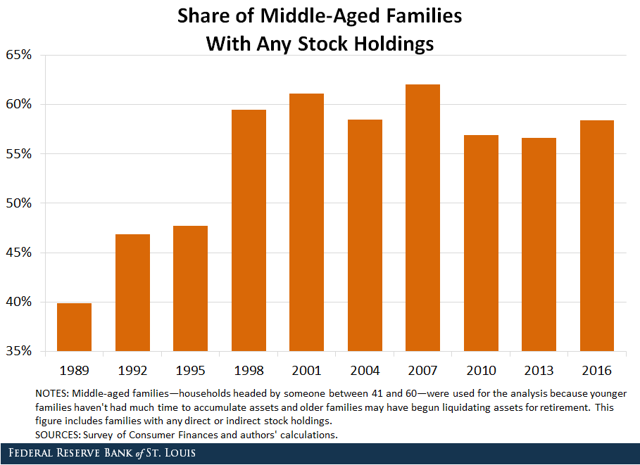 As I argued in a February article this year on the plight of the average American, the wealthier one is, the higher one's income from investments such as capital gains, rents, dividends, and interest. For the wealthiest households, interest and dividends alone roughly equal the amount earned from salaries and wages. 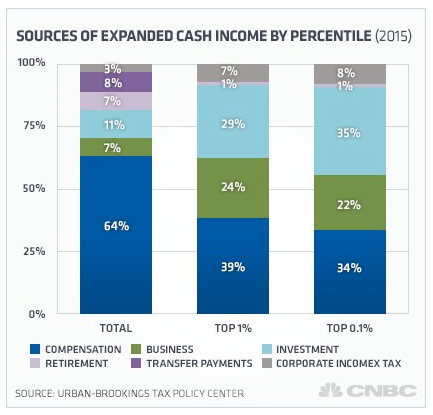 For those who were best positioned to benefit from the Fed policy-fueled asset boom over the last few decades (mainly, the wealthy and Boomers/Gen Xers), the purposeful "wealth effect" was a huge boost. Rising asset prices have fueled higher capital gains, which have been partially reinvested in higher-yielding assets to generate more income.

Thus, monetary stimulus has escalated both wealth and, to a lesser extent, income inequality. While this has been a boon to the already-wealthy as well as to Boomers, who hold the majority of America's wealth, it has been harmful to the non-wealthy and Millennials (who are both predominantly savers).

Perhaps this difficult situation is one reason why Millennials are significantly less likely to consider themselves successful than Boomers or the Silent Generation. 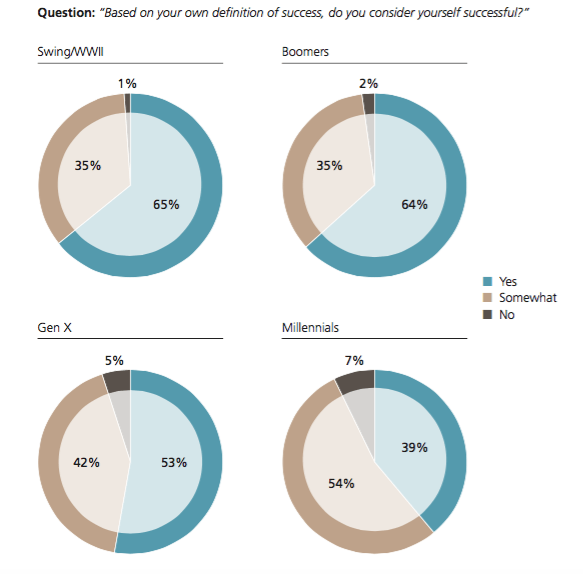 For investors, the pertinent lessons are that (1) the Fed has become too important to ignore, (2) asset price risk is currently less risky than it used to be, (3) the market along with upper-middle-income consumers are totally reliant on the Fed's "wealth effect" and thus on the continuation of high inequality, (4) the Fed is almost out of monetary ammunition, and (5) holding a decent-sized cash allocation is still smart despite the Fed's support of assets.

It is not necessarily easy to abide by all of these points in unison. Points 2 and 5, in particular, seem to conflict. How can asset price risk be blunted (by the Fed's liquidity injections and easing) while having a decent-sized cash allocation on the sidelines remains wise? Point 4 is one reason: the Fed's support of asset prices will become much more limited when ultra-short rates hit zero again. More QE, likewise, may fuel more buybacks and keep asset prices elevated for a while.

In short, Fed policies have the ability to keep asset prices disconnected from economic fundamentals longer than they would be otherwise. But they are not able to maintain this disconnect forever. Economic reality will sink back in eventually. Already this year we are seeing buybacks slow a bit from last year's elevated levels. If the so-far mild earnings recession turns further south in the coming quarters and management teams further rein in buybacks, stock prices could experience substantial weakness even in the face of all this Fed-injected liquidity.

If there is another bear market in the coming years, Millennials would do well to use their significant cash holdings to buy higher-risk/higher-return assets. They can hardly be blamed, however, for distrusting artificially distorted markets that have blown up at least once already in their lifetimes. It will be interesting to find out whether the Millennial attitude toward cash changes when assets are more cheaply valued, or if their preferences are instead solidified.