Compared to the end of September, Mad Dogs of the Dow for 2019 decreased its lead in front of Dow Jones ETF (DIA) and the original Dogs of the Dow strategy. Two main culprits for this are Boeing (BA), which during September fell 10.66%, and Travelers (TRV), which lost 11.86% of its value.

After ongoing 737 Max issues came a series of downgrades from Wall Street firms, which believe that amid the recent developments, it could take longer than expected for the model to return to service. At the beginning of the year, Boeing had a seventh-highest shareholder yield (2.6% dividend yield + 4% net buyback yield) in the Dow index. Consequently, it was included in the Mad Dogs of the Dow strategy, which consists of ten Dow stocks with the highest net cash distributions.

However, as presently there are eleven other Dow components with higher total yield (shareholder yield), it is not a part of the Mad Dogs of the Dow strategy for November.

During the previous month, Travelers disappointed with its quarterly results. Its third-quarter net income came 44% lower than the last year, which immediately sent the shares 9% lower. As with Boeing, Traveler Inc. is not a part of the strategy for November.

The best performing year to date company in the Dow index continues to be Apple (AAPL). At the end of September, Apple's total YTD return was 43.70%, which at the end of October increased to 59.61%. During the previous week, Apple reported record-high revenues and earnings beating market expectations, which will probably trigger a series of upgrades. Although, since the beginning of the year, Apple's stock massively outperformed all other Dow components, it is still a part of the Mad Dogs of the Dow for November. The reason is a massive stock repurchase program, which reflects itself in a 7.7% shareholder yield (1.3% dividend yield + 6.4% net buyback yield).

Since the beginning of the year, Mad Dogs of the Dow for 2019 (Mad Dogs from January) outperformed the original Dogs of the Dow strategy by 4.26%, and the Dow index by 1.66%.

Readers that would like to use this simple yet powerful strategy do not need to wait until the beginning of the next year. The table below includes the updated list of the Dow companies with the dividend, buyback, and the total (shareholder) yield. The top 10 companies on the list, which provide the highest shareholder yield, form the Mad Dogs of the Dow for November. According to this strategy, out of the 30 Dow components, these ten companies currently offer the best buying opportunity. 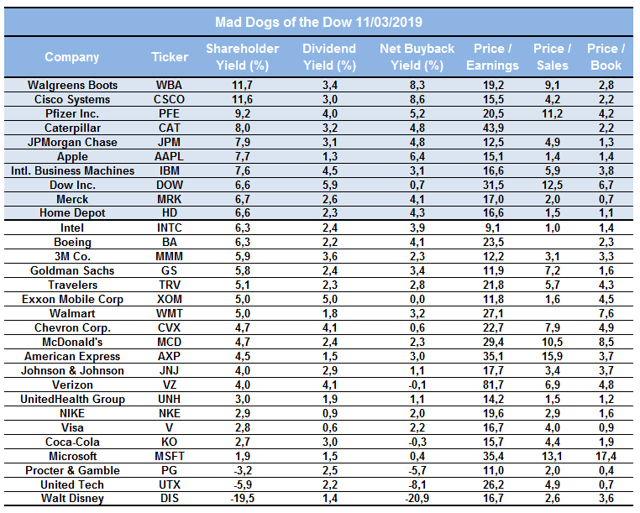 The Strategy is based on the famous Dogs of the Dow method. However, compared to Dogs of the Dow, it uses a net buyback yield (net change in outstanding shares) as a second and critical outperformance factor.

Besides the updated Mad Dogs list, this article discusses the Top 10 Mad Dog investments from the beginning of this year. It compares their performance to the Dogs of the Dow strategy and the Dow index.

On average, between 1961 and 1998, the original Dogs of the Dow strategy outperformed the Dow index by 2.6% per year. However, since 2000, the average outperformance decreased to approximately 1.5% per year.

The decrease in the outperformance of the Original strategy corresponds to the surge in buybacks. Before the 1990s, dividends were between 70% and 80% of the total distributions to shareholders. During the late 1990s, buybacks have surged and surpassed dividend payments. Since then, repurchases account for approximately 60% of the total cash distributions made by the S&P 500 companies.

At the end of Q2, on a trailing twelve months basis, the S&P 500 companies returned $1.27 trillion to its shareholders. However, at $797 billion, the figure distributed via stock repurchases was much higher than $469 billion distributed via dividends. Thus, share buybacks represented almost two-thirds of the total cash distributions. These figures make it clear that dividends are not the only measure of shareholder compensation.

Such structural changes require strategy adjustments. The goal of the adjusted strategy is to use the predictive power of net buybacks and utilize it for the separation of the top-performing companies from the underdogs.

Although at the beginning of the year, the Mad Dogs of the Dow companies had a lower average dividend yield, the total yield (shareholder yield) was higher by 30% (5.59% vs. 7.34%).

In the following table, there is a list of the Dow constituents with the dividend and net buyback yields on the first day of this year. Between the original "Dogs of the Dow" and the modified "Mad Dogs of the Dow" strategies, there were only three overlapping companies. These are Cisco (CSCO), JPMorgan (JPM), and IBM (IBM), while the other seven positions were different. 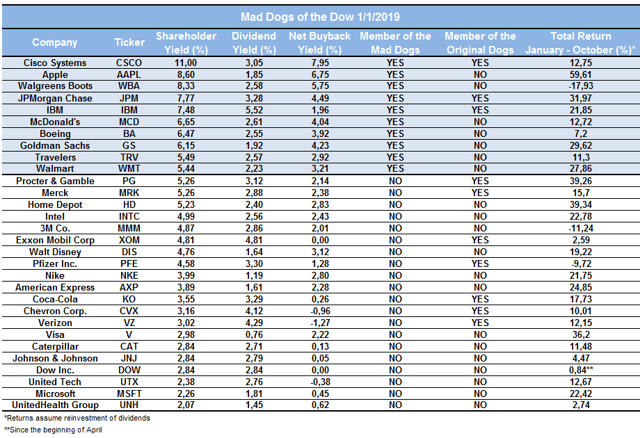 During the last 20 years, a lot of companies have changed their cash distributions from dividends to repurchases. By doing this, they reward investors with a more favorable tax treatment. Thus, by selecting companies purely on the dividend yield, one misses companies that distribute high amounts of cash via equity buybacks.

For example, by selecting companies purely on the dividend yield, the Original strategy missed Apple (AAPL). Due to the low dividend, Apple was at the bottom of the list. However, when stock repurchases are taken into account, it is one of the top cash distributors. Since the beginning of the year, with 59.61%, Apple is the top-performing stock of the Dow index.

What is surprising is that the SPDR Dow Jones Industrial Average ETF (Portfolio 3), which contains 30 stocks, had in 2019 the largest maximum drawdown of 6.38%.

During the first ten months of 2019, on $10,000 invested, dividend income for the Dogs of the Dow ($329) was higher compared to the Mad Dogs strategy ($237). However, dividends are only one component of the total return, which was significantly higher for the Mad Dogs of the Dow strategy.

Compared to the DJIA index, this strategy has a much more concentrated allocation. For the Mad Dogs of the Dow, the exposure to the single stock is 10%, compared to, on average, 3.33% for DJIA constituents. However, due to the Dow's price-weighting methodology, its single stock exposure could be significantly above the average. Similarly, for the Mad Dogs strategy, the exposure to one sector or industry could be substantially higher compared to the Dow's exposure.

On the one hand, a more concentrated portfolio with a much higher shareholder yield should be a source of significant long-term outperformance. However, on the other hand, it is a source of the additional risk, which could lead to considerable return differences compared to the DJIA index. Additionally, this strategy is not focused on the minimization of the tracking risk. Instead, it focuses on the absolute long-term outperformance.

Readers that plan to use any part of this strategy should adjust the percentage allocated to equities and the number of equity positions in their overall portfolio according to their willingness and ability to tolerate risk.

Additionally, readers that would like to utilize the shareholder yield, but would like to diversify among a larger number of positions, could use the Top 10 Dividend King strategy, which is based on the same investment principles.

If you are new to my articles, please hit the "Follow" button on the top.

Until the next time, be patient with your strategies and give them time to grow!

Disclosure: I am/we are long AAPL, CSCO, WBA, JPM, IBM, MCD, BA, WMT. I wrote this article myself, and it expresses my own opinions. I am not receiving compensation for it (other than from Seeking Alpha). I have no business relationship with any company whose stock is mentioned in this article.