I grew critical of Apple (NASDAQ:AAPL) earlier this year when it became clear the company would decline in revenue year-over-year, yet investors and analysts alike continued to pump the stock. With the latest earnings report, we have further confirmation that Apple is not a growth company anymore although it continues to trade at growth valuations.

While many celebrated yesterday's earnings report, there were notable signs of erosion. To start, Apple has lost $5 billion in revenue year-over-year, from $265 billion to $260 billion. This is despite having the "best fourth quarter ever," according to Tim Cook. The truth is that the EPS was higher due to buybacks.

My analysis in MarketWatch published prior to earnings pointed out that the iPhone was exposed to macro smartphone saturation. Those numbers showed a deeper decline than overall revenue with a $22 billion decline reported year-over-year.

Although Apple has ceased reporting smartphone unit sales, the numbers reveal there are fewer smartphone units being sold. Moving forward, with the recent release of the iPhone, Apple will not contend with a lower average sales price. This is bound to affect smartphone device revenue moving forward, which declined at a rate of 15% year-over-year.

The smartphone market contracted to 1.462 billion units in 2017 and to 1.420 billion units last year. While almost 1.5 billion smartphone sales a year globally is substantial, the law of saturation drives down prices. I wrote about the price effects of mobile saturation in March, prior to Apple lowering prices for the first time with the iPhone 11.

China represents about one third of smartphone penetration compared with the U.S., at one-12th. Pricing wars are evident in Asia, where China's Huawei has grabbed market share to become the world's fastest-growing smartphone seller. The company has seen a 66-fold increase from 3 million units sold in 2010.

Samsung may be the true bellwether for mobile, as the company is in first position for total smartphones shipped and is the world's largest manufacturer of memory chips. In the first quarter, the company reported a 60% drop in operating profits, followed by a 56% decline in the second quarter. Analysts expect another decrease in the third quarter. Smartphone units have been making lower highs and lower lows over the past two years.

Samsung's disappointing performance hints at the ties between smartphone sales and consumer confidence as China's confidence index is languishing at a two-year low.

Notably, IDC forecasts the pricing wars will continue with 5G handsets in Asia, as low-cost models are expected to hit the market next year. In the U.S., Latin America and Japan, the average selling price of a 5G handset will be around $1,000, while it will be $600 in China.

The fiscal Q4 earnings beat is at odds with overall performance. Although profit topped expectations, this is the first time since Tim Cook took over in 2011 that Apple declined in profit in all four quarters of a fiscal year.

The media touts the services revenue as the answer to the iPhone decline. As we saw this year, double-digit declines on the segment responsible for $165 billion in revenue (iPhone) is not easily staved off by a revenue segment posting $40 billion per year (services).

If one did not look closer at the numbers, it would be easy to think services was a major growth segment. We see the growth was at 18%, which is below the 20% traditional benchmark that defines growth. As of now, this doesn't appear to be the answer to the gaping iPhone decline. This is proven by the annual decline in overall revenue.

Wearables growth of 55% to $24 billion in revenue is decent. However, again, the iPhone decline was steep enough at $22 billion to wipe out the entire wearables category.

I had pointed out in a Fox Business News interview prior to earnings that it's unlikely lightning strikes twice with the iPhone as it's not only one of Apple's best growth drivers historically, but it's also one of the best growth drivers we've seen across the tech industry. This is evident in last year's smartphone revenue of $165 billion, which I also pointed out will be Apple's peak year in mobile. Keep in mind, services and wearables are dependent on the iPhone.

Note: Knox Ridley specializes in and covers entries and exits as a contributing analyst to our premium site Tech Insider Research.

Here's a snapshot of Apple's performance over the past year. If the stock ticker was not attached to the graph, it would be hard to guess this is the world's most valuable company. 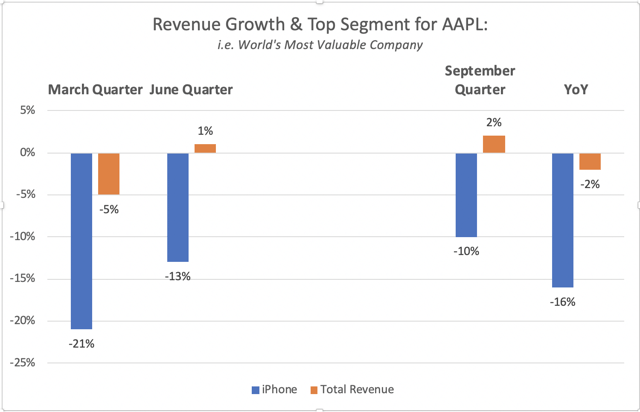 As most investors know, Apple has plenty of cash. It produces about $50 billion-$60 billion a year in free cash flow and has more than $100 billion in cumulative reserves to fund new projects. While analysts are optimistic about many new pivots, these will weigh on margins. This is especially true for Apple TV+, which comes with a high content bill and low subscription revenue, as the OTT streaming service will be bundled for free or priced at $5.

Keep in mind, Apple's cash reserves are seeing the effects of the buybacks, and Alphabet (GOOG) (GOOGL) has now surpassed Apple in cash reserves. Apple has $102 billion compared to Alphabet's $117 billion. This is due to Apple spending $122 billion on stock buybacks since the beginning of 2018. Alphabet is growing, as well, at a rate of 20% year-over-year. 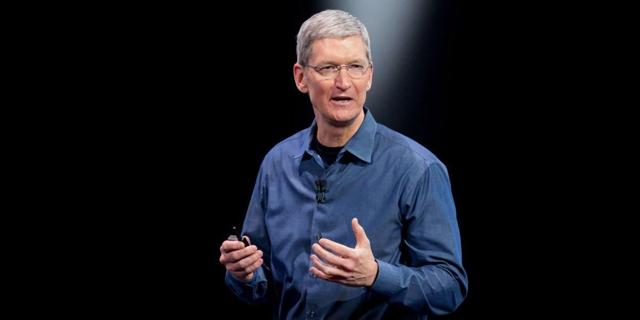 Analysts who are raising Apple's price target based on fiscal 2020 cite Apple TV+ revenue as a primary reason with little discussion of the forecast for Apple's main growth driver. Apple TV+, which will compete with Amazon Prime Video, Netflix and other TV streaming services, is more likely to cause bottom-line losses in the short term as Verizon (VZ) is offering the subscription for free while requiring costly original content from headliners such as Oprah.

In my opinion, these new price targets seem more like an attempt to cover current positions, as the majority of institutions are holding this stock at lower entry points.

EPS Not as Relevant Due to Buybacks

Many Apple proponents will use the stock as an income stock, yet the company trades at growth valuations. The buybacks Apple is doing on a consistent basis are alarming for a tech company, who should be innovating with cash reserves rather than propping up the stock price to beat earnings per share.

In the most recent quarter, Apple disclosed it had spent $17.9 billion to buy back 92.6 million shares during the fiscal fourth quarter. During the three prior quarters in the fiscal year, Apple had spent $49.2 billion. There's $78.9 billion remaining in its stock buyback program. The reduced share count this year has helped Apple beat earnings per share of $2.91 with $3.03 reported with fewer outstanding shares as a result of the buyback.

Apple has bought a total of 2 billion shares over the past six years, which brings the shares outstanding to their lowest level since 1999, according to Charlie Bilello, who is also a Seeking Alpha contributor. 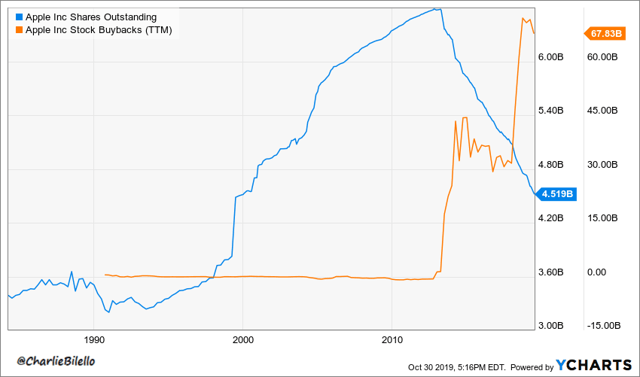 Apple will be particularly exposed to lower consumer confidence when this occurs. Mobile saturation already is showing its effects with a $22 billion loss in iPhone revenue year-over-year. In fact, the saturation of the iPhone could prove to be one of Apple's biggest challenges to date, as the company attempts to make many pivots, all of which will add noise to the big picture that mobile's golden days are behind it. This will not be resolved by a single quarter's earnings "beat," nor will it be absorbed by services revenue until at least 2023.

If your investment thesis is to focus on primarily cash reserves and cash flow, while ignoring growth and the leverage of buybacks to boost EPS, then Apple is likely in your portfolio. As a tech analyst, who look toward future growth for the highest gains, this is a company where I'm personally on the sidelines and is not a company I can recommend long term.

Providing high conviction analysis to give your tech portfolio an edge.

Most analysts on Seeking Alpha study P&Ls and balance sheets and know little about technology. This provides zero competitive edge as everyone has access to the exact same information.

I have analyzed thousands of companies in the technology sector, and outperform due to hands-on experience. Although traditional fundamentals are included, the edge comes from information not broadly known. If you have money in tech stocks, consider using a specialist.

My analysis is the most in-depth you'll find in tech. For more information, please click here.

Beth Kindig is the CEO and Lead Tech Analyst for the I/O Fund with audited results of up to 750% that beat Ark and other leading active tech funds over four audit periods in 2020 and 2021.