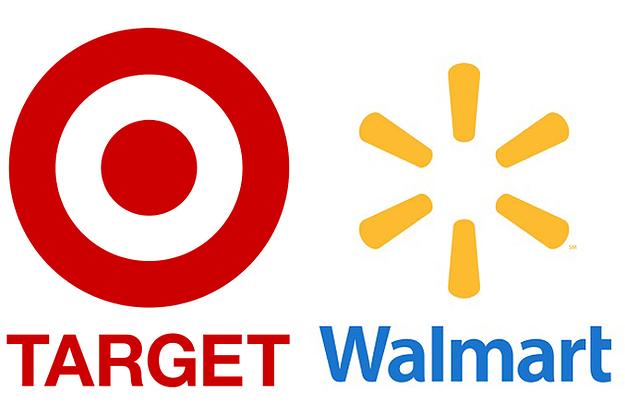 The retail industry has attracted a lot of attention in recent years. The industry has seen increased changes as companies adjust to the current trend in online shopping. Investors in the industry continue to think of the “threat” posed by Amazon (AMZN). Retail bankruptcies and store closures have continued to accelerate this year. In this article, I will provide an analysis of Walmart (NYSE:WMT) and Target (NYSE:TGT), which are some of the most popular retailers in the country.

Like other retailers, the two companies have been changing their business model to adjust to the current retail environment. They have invested heavily in e-commerce as they try to battle with upcoming companies like Amazon.

Walmart has been more aggressive. In 2018, the company acquired Flipkart for $16 billion. The company did this as it tried to capture the rapidly growing Indian market. In 2016, Walmart acquired the fast-growing e-commerce platform, Jet.com, for more than $3 billion. It followed this up by acquiring companies like Bonobos and Bare Necessities. As a result, its e-commerce business has seen double-digit growth.

Target has been a bit conservative. Unlike Walmart, it has not made any significant acquisitions as it tries to compete with Amazon. Its only major acquisition was the 2017 acquisition of Shipt, a company that offers logistics services for e-commerce companies. Instead of acquisitions, Target has focused on improving its broader business strategy. The company has added smaller outlets, mostly in college towns, launched more in-house brands, remodeled its stores, improved product delivery, and is growing its website.

This year, Walmart stock has gained by ~26% compared to Target’s ~63%. As a more international brand, investors have been worried about Walmart’s business overseas. They have also been worried about its growth in the e-commerce industry. For example, Jet.com has seen significant weakness under Walmart. According to SimilarWeb, Jet.com has seen its traffic decline significantly. It is now ranked at position 425 in the global e-commerce and online shopping category. A look at its performance on Google Trends shows that its popularity has continued to wane. Bonobos has not done good as well. The company recently announced significant layoffs, which is a signal that it is not doing well.

The same trend is happening in India, where its Flipkart acquisition is clouded with controversy. Shortly after Walmart acquired Flipkart, the country passed a law limiting so-called “multi-brand retailing.” This law makes it impossible for Walmart to sell its own private-label products. Also, the law makes it almost impossible for Walmart to use its supply chain to achieve lower prices. This is a major issue for Walmart, especially after making a $16 billion bet on the Indian market.

Walmart is much bigger than Target because of its many domestic and international stores. Past attempts by Target to break out in the international market failed after it closed all of its Canadian stores in 2015.

Walmart has a forward dividend yield of 1.80%. This is slightly lower than the S&P 500 average dividend yield of 1.80. It is also slightly below Target’s yield of 2.45%. Walmart and Target have payout ratios of 47% and 42%, respectively. The payout ratio is important because it shows the amount of money a company is returning to shareholders versus how much it is keeping on hand. Meanwhile, the two companies have been repurchasing their shares. In the past ten years, Target has reduced its share count by 32% compared to Walmart’s 25%. 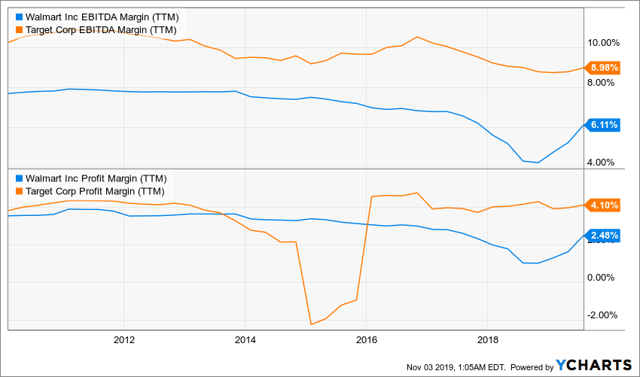 On valuation, Target has a trailing twelve-month P/E ratio of 17 compared to Walmart’s 26. The two have forward P/E ratios of 16.28 and 22, respectively. Cash flow is an important metric when looking at retailers like Walmart and Target. The two companies have price-to-free cash flow ratios of 18 and 20, respectively. These numbers are summarized below, and they show that Target is significantly undervalued compared to Walmart. 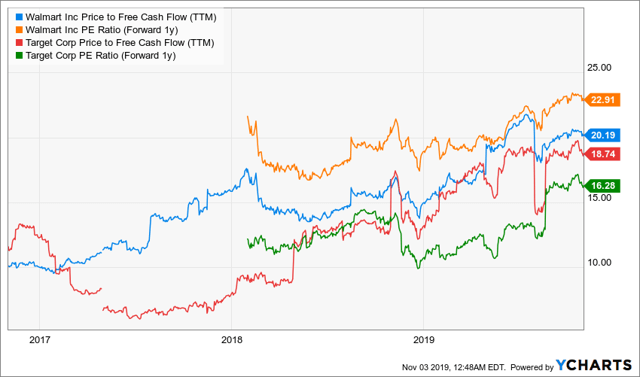 Walmart and Target have a slightly different business model. Target focuses mostly in the United States, while Walmart has business around the world. As mentioned above, Walmart has more stores internationally compared to those in the United States. Most of these stores are in Mexico. While diversification is a good thing, I believe that it poses several risks at a time when the world economy is slowing. Target has also increased its spending on private-label brands.

Walmart and Target have different approaches to e-commerce. Target has focused mostly on same-day services, in-store pickup, drive-up, and Shipt. On Shipt, Target also allows faster delivery from other stores like CVS (CVS), H-E-B, and Meijer. Walmart, too has focused on faster delivery and in-store pickup. It has also focused on acquisitions as it tries to battle Amazon. However, as mentioned above, Walmart appears to be struggling with its aggressive e-commerce strategy.

Walmart and Target are two iconic brands that are trying to make retailing cool again. Walmart’s app is the second-most popular shopping app in the United States after Amazon. Target is ranked at position 6. Target stock has gained by 63% and is currently near its all-time high. Walmart is up by 26% and is shy of its all-time high. Given the choice of the two, I believe that Target is a better investment because of its lower exposure to the international market, valuation, better dividend yield, faster growth, better margins, and its private-label growth.

Crispus Nyaga
3.33K Followers
I am a financial analyst specializing in the technology, consumer, and industrial stocks. I operate a private office in Nairobi that invests in American and European equities. I am also the founder of macrostreet.com, a financial media platform. Fellow contributor, Stella Mwende is one of my colleagues.
Follow

Disclosure: I am/we are long TGT. I wrote this article myself, and it expresses my own opinions. I am not receiving compensation for it (other than from Seeking Alpha). I have no business relationship with any company whose stock is mentioned in this article.

43 Comments
To ensure this doesn’t happen in the future, please enable Javascript and cookies in your browser.
Is this happening to you frequently? Please report it on our feedback forum.
If you have an ad-blocker enabled you may be blocked from proceeding. Please disable your ad-blocker and refresh.