By Chris Turner, Global Head of Strategy and Head of EMEA and LATAM Research

Central and Eastern Europe has been withstanding the slowdown in Western Europe very well. But will the good times last? In our comprehensive Directional Economics report, which we summarise below, we look at why the region has been so resilient up until now and whether it will continue in 2020.

The situation in Central and Eastern Europe in a nutshell:

Weathering the storm: Who’s most protected from the European slowdown? 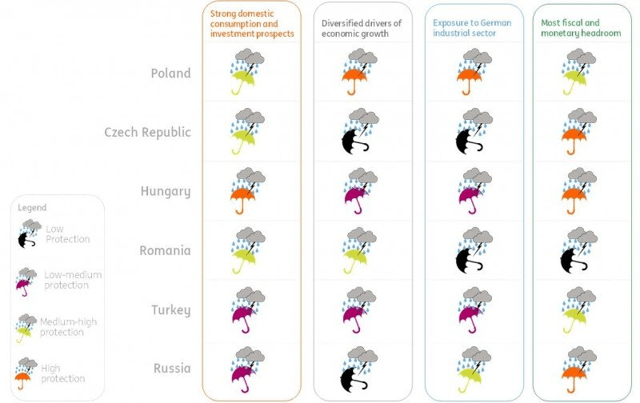 The eurozone flirting with recession

The eurozone economy has recently shown some worrisome signs of slowing. While the exposure to the global economy has been a strength in times of weakening domestic demand, it is now proving to be a weakness. The slowdown in world trade has hit eurozone economies more significantly than other major economies as the eurozone is much more open than most markets.

Quite a few factors have been key to the slowdown, but the trade war seems to take centre stage in explaining why global trade has started to contract. Because external demand is so vital to the slowdown that the eurozone is experiencing at the moment, it has remained relatively contained to industry so far. But while employment and, to some extent, wage growth has been holding up well in a low-inflation environment, industry has been hit hard. Production peaked in December 2017 and has since declined steadily to about 4.8% below its peak. As can be seen in the chart below, the slowdown is strongly related to foreign final demand.

Production has been in recession since December 2017 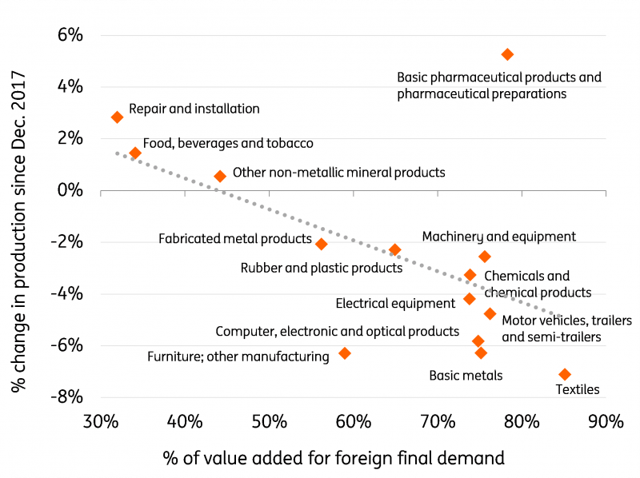 Why CEE is decoupling from the eurozone

This situation in Central and Eastern Europe is strikingly different. Growth consistently exceeds that of the eurozone, and the slowdown in Western countries hasn’t affected the region as deeply as it once did. Within the EU, CEE members are certainly outperforming and many of those are actually growing above potential. This is a far cry from what’s happening in Germany and the EU as a whole.

The situation in Central and Eastern Europe is strikingly different

Historically, manufacturing production in the CEE region typically tracks German measures pretty closely. However, while German, and generally eurozone economic performance started to deteriorate from the second quarter of 2018 onwards, CEE economies, notably Poland and Hungary, have been showing strong resilience. The spillover to CEE, so far, has been delayed compared with previous crisis periods. The effect also seems to be milder.

We believe the structural reasons for the decoupling mostly arise from the changing nature of CEE’s domestic economies (e.g. drivers of growth) and international trade dependencies (e.g. main trade partners). There's much more detail on this in our Country Focus section of the main report, which you can find here.

How CEE economies are performing relative to their potential 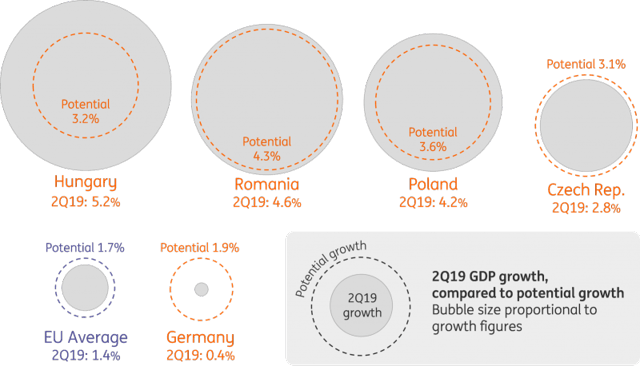 The changing nature of the CEE's domestic economy

Another important driver behind this phenomenon could be the nature of the recent shock. Usually Germany is a good barometer of a slowdown in global demand. But current German weakness is more ‘local’ (e.g. emission norms hitting local car makers) and only partially driven by global demand (Brexit, trade uncertainties). On the issue of decoupling, it is clear however that CEE is not totally immune.

No matter how bulletproof CEE economies are looking, local manufacturers are deeply integrated into the European value chains. As a consequence, the weak performance of the German automotive industry may well eventually feed into CEE economic performance in the medium term through the real economy channel. According to research by the National Bank of Hungary, for example, the retreat of the German economy usually spills eastwards within six to nine months.

CEE economies are currently generally more domestic demand-driven than they were between 2008 and 2016. This is because the CEE labour market is much tighter and governments are not facing financing constraints - since any weakness so far has been limited to the manufacturing sector.

Looking at the expenditure side of GDP in CEE countries, net exports had been the strongest driver of growth between 2009 and 2013 (partly helped by weaker currencies), while now they are far less significant. In terms of domestic demand (consumption and investment) and external sources of growth (net exports), the region’s growth path is generally more balanced and sustainable now than it was in the 2009-2013 period. But even on that issue of net exports, one could also argue that Germany is more exposed to final demand outside of the EU (particularly Asia) and that as long as consumption holds up within Europe, CEE should be less affected.

Looking at the expenditure side of GDP in CEE countries, net exports had been the strongest driver of growth between 2009 and 2013 (partly helped by weaker currencies), while now they are far less significant. In terms of domestic demand (consumption and investment) and external sources of growth (net export), the region’s growth path is generally more balanced and sustainable now than it was in the 2009-2013 period. But even on that issue of net exports, one could also argue that Germany is more exposed to final demand outside of the EU (particularly Asia) and that as long as consumption holds up within Europe, the CEE should be less affected.

Focusing on consumption, the resilience is largely a result of high wage growth and rising employment in the region. Compared to 2009-13, unemployment has decreased significantly in all countries, reaching historical lows, further fuelling wage increases and consumer demand. Labour costs and competitiveness are also important factors, and we look at that in much more detail in our main report.

At the same time, tight labour markets and an insufficient workforce, inflows of foreign direct investment (FDI) and EU funds are all contributing to investment growth as well. The investment rate (% of GDP) in all CEE countries is currently above that of Germany and the eurozone average. In practice, this has seen governments in the CEE region cumulatively invest anywhere between six and thirteen percent more (in GDP terms) than the eurozone average over the past five years.

Percentage of country’s total GDP related to value added exports to Germany. Click on the image to expand. 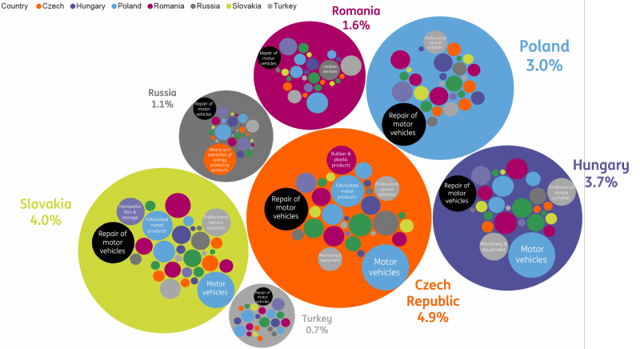 Acknowledging the negatives, focusing on the positives

In all, based on the labour costs and labour productivity developments, CEE has managed to maintain its price competitiveness despite the hefty wage growth. This, combined with the new structure of global value chains (countries producing unique intermediate goods and consumer goods), suggests that labour market and international work-sharing can be a strength rather than a weakness in the long-run for CEE, providing another cushion to a global slowdown.

We would be naïve to think that the CEE region is immune to Germany’s sharp slowdown, but we do believe that strong domestic demand and the more diversified nature of CEE economies can provide strong protection from European headwinds. And the fundamental story of a competitive and productive labour force, encouraging FDI inflows remains intact. Strong activity, tight labour markets and rising wages in CEE over recent years has laid the groundwork for private consumption growing at rates of 2-4% year-on-year in 2020. This will drive full year 2020 GDP growth at rates mostly above, or at, ten-year averages. Given that Germany is heading into a recession, that’s not bad at all.

ING Economic and Financial Analysis
2.33K Followers
From Trump to trade, FX to Brexit, ING’s global economists have it covered. Go to ING.com/THINK to stay a step ahead. We’re sorry we can’t reply to individuals' comments.Content disclaimer: The information in the publication is not an investment recommendation and it is not investment, legal or tax advice or an offer or solicitation to purchase or sell any financial instrument.This publication has been prepared by ING solely for information purposes without regard to any particular user's investment objectives, financial situation, or means. For our full disclaimer please click here.