Precious metals royalty and streaming companies represent a very interesting sub-industry of the precious metals mining industry. They provide some leverage to the growing metals prices, similar to the typical mining companies; however, they are less risky in comparison to them. Their incomes are derived from royalty and streaming agreements. Under a metal streaming agreement, the streaming company provides an upfront payment to acquire the right to future deliveries of a predefined percentage of metal production of a mining operation.

The streaming company also pays some ongoing payments that are usually well below the market price of the metal. They can be set as a fixed sum (e.g., $300/toz gold) or as a percentage (e.g., 20% of the prevailing gold price), or a combination of both (e.g., the lower of a) $300/toz gold and b) 20% of the prevailing gold price). The royalties usually apply to a small fraction of the mining project production (usually 1-3%), and they are not connected with ongoing payments. They can have various forms, but the most common is a small percentage of the net smelter return (NSR). The NSR is calculated as revenues from the sale of the mined products minus transportation and refining costs.

To better track the overall performance of the whole sub-industry, I created a capitalization-weighted index (Precious Metals Royalty and Streaming Index) consisting of 11 companies. Later, based on the inquiries following the June report, I also introduced an equally-weighted version of the index. Both indices include the same companies and are calculated back to January 2019. 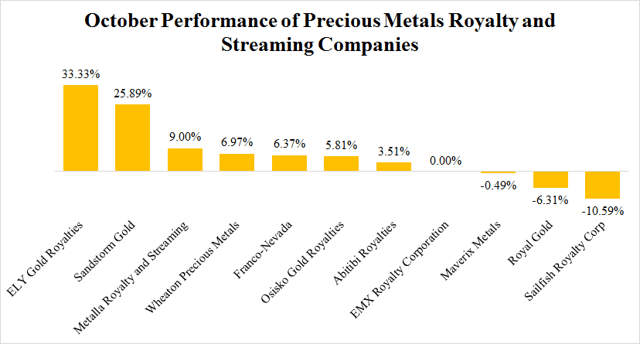 During the month of October, the highest gains were recorded by Ely Gold Royalties (OTCQB:ELYGF). The 33% gains were recorded over the second half of the month after the C$6 million financing was announced. Also Sandstorm Gold (SAND) did very well, growing by 25%. In this case, the share performance was supported by very good operational and financial results. On the other hand, October was not a good month for Sailfish Royalty Corp. (OTCQX:SROYF) that experienced a 10.59% share price decline. Royal Gold experienced a 6.31% share price decline attributable to the issues at the Centerra Gold's (OTCPK:CAGDF) Mount Milligan mine.

In October, gold and silver prices grew. As can be seen in the chart above, the SPDR Gold Trust ETF (GLD) share price increased by 2.6% and the iShares Silver Trust ETF (SLV) share price increased by 6.3%. It had a positive impact also on the precious metals miners and the VanEck Vectors Gold Miners ETF (GDX) recorded 5.4% and the VanEck Vectors Junior Gold Miners ETF (GDXJ) even 8.1% gains. The precious metals royalty and streaming companies did not fall behind. The Precious Metals R&S Index increased by 3.3% and the Precious Metals R&S Equally Weighted Index increased by 6.7%.

October was a relatively calm month, most of the companies released no news or only the date of their Q3 2019 financials release. Most of the earnings releases are scheduled for November. But as could be seen in the case of Sandstorm Gold that released its financial results on October 30, the upcoming earnings season should please the investors.

Royal Gold announced that it sold approximately 50,000 toz gold, 510,000 toz silver and 1,100 tonnes copper in Q3 (Royal Gold's Q1 2020). It equals approximately to 60,000 toz of gold equivalent. The sales were lower than in the previous quarter, due to lower production volumes at the Mount Milligan mine. While the realized copper price declined by 7.7% quarter-over-quarter, the realized gold and silver prices increased by 12.8% and 11.2% respectively.

On November 15, Royal Gold announced some management changes and on October 30, it provided some more news about the situation at Mount Milligan. While the water issues have been resolved (at least for now), it is highly probable that due to the declining recoveries, the resources and reserves will be reduced:

While Centerra has acknowledged that the extent of any changes in reserves and resources cannot be precisely determined until all the relevant studies and modeling have been completed, it expects that the mineral reserves and resources at Mount Milligan will be materially reduced. It is unclear at this point what impact, if any, the results of this work will have on the value of Royal Gold’s interests in the Mount Milligan operation.

Metalla Royalty & Streaming (OTCQX:MTAFF) reported its Q3 financial results (Metalla's Q1 2020). Metalla generated revenues of $160,298, loss from operations of $1.2 million, and a net loss of $1.22 million. However, the results were negatively affected by a delayed shipment of silver from Endeavour Mining (EXK). This revenue will be recognized only in the next quarter.

Abitibi Royalties (OTC:ATBYF) announced that in Q3, its royalty on a portion of the Canadian Malartic mine generated revenues of C$834,000. The total Q3 revenues equaled C$988,000. The revenues for 9M 2019 equaled C$3.2 million. The company also declared a Q4 dividend of C$0.03 per share.

EMX Royalty Corporation (EMX) announced the acquisition of 791,000 (1.04%) of shares of Boreal Metals (OTCPK:BORMF) at a price of C$0.05 per share. Due to this transaction, EMX's share ownership increased to 12.53%. EMX also owns warrants that can grow its ownership to 14.77% after they are exercised. Boreal Metals is searching for gold, silver, copper, and zinc in Sweden.

ELY Gold Royalty acquired a 1% NSR royalty and a right of first refusal on an additional 1% royalty on the Lincoln Hill property in Nevada. The acquisition that was first announced back in April will cost $750,000.

On October 17, the company announced a convertible line of credit from Eric Sprott. Eric Sprott will provide C$6 million credit line. Every draw will be in the form of a convertible note with a 24-month maturity and strike price of C$0.37. The maximum potential share dilution resulting from this deal equals 14%.

In November, the Q3 financial results should be the main topic. Royal Gold and Osisko Gold Royalties will release their Q3 results on November 6, followed by Franco Nevada (November 11) and Wheaton Precious Metals (November 14). Due to the high Q3 gold and silver prices, the expectations are high.