"Raising rates is really about inflation."

In order to raise rates, Chairman Powell is looking for a "sustained" rise in inflation that is "significant."

Structural and cyclical factors make a sustained rise in core inflation above the FOMC 2% target an unlikely event.

The FOMC has signaled that they do not want to cut rates any further but also suggested an increase in interest rates is not on the table for the foreseeable future.

According To Powell, The Next Rate Hike Might Be Never

With time to digest the latest FOMC press conference and third reduction in the Federal Funds rate, it is a good time to dissect some hidden comments Chairman Powell made about the conditions required to raise interest rates.

Over the past several months, the thought of a "hike" in the Federal Funds rate was nothing more than a fantasy. Interest rates markets only wrestled with the question of how many cuts we should expect.

As trade tensions relaxed, Brexit uncertainty dwindled, and equity markets surged to new all-time highs, sentiment has shifted, and reporters started to grill Chairman Powell on the conditions necessary for a rate hike.

The FOMC has tried to make it clear that they do not wish to cut interest rates any further, and the bond market has respected this view, virtually removing all expectations of further rate cuts over the next two years.

The probability of a rate cut in December has plunged to just 8% after reaching a high of 66% in August.

As the chart above shows, at the end of August, the market was expecting the Fed Funds rate to trough below 0.90%. Today, the market has shifted the entire curve higher by more than 40bps. This shift in market expectations contributed largely to the backup in interest rates across the entire Treasury spectrum.

The curve today (orange line), perfectly flat, signals the market expects virtually no movement from the Fed over the next two years.

We know why the Fed is no longer in a rush to reduce interest rates. Perceived trade war improvements and easier financial conditions (stock market) clearly suggest further rate reductions are not needed.

When asked about the conditions needed to raise interest rates at the latest FOMC press conference, Chairman Powell articulated a scenario that may result in no further rate increases... ever. Let's explore.

Chairman Powell said, on the topic of raising rates, "it is really about inflation." The Federal Reserve has suggested numerous times that their preferred inflation metric is the Core PCE deflator in year over year terms. Based on this measure, inflation only moved above their 2% target for two brief periods this economic cycle, namely 2012 and 2018. 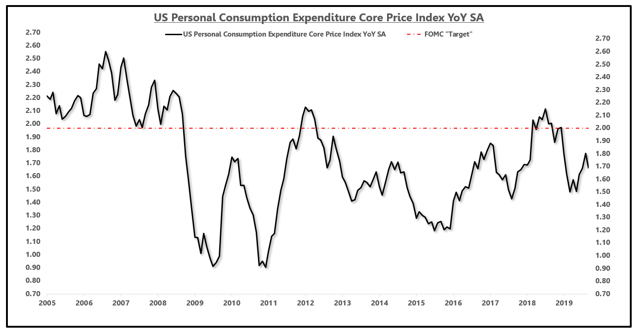 "We just touched it," said Powell, commenting about the brief rise in core inflation seen in late 2018.

In order to raise rates, Powell outlined, "we'd need to see a really sustained move up in inflation that is significant."

If you recall, Chairman Powell changed the FOMC inflation targeting to suggest a "symmetrical" 2% rate was the target. This means that inflation below 2% should be offset by a rise above 2%, averaging to the 2% target over time.

Since the start of this economic expansion, the core PCE deflator has averaged 1.58%, well below the 2% target, and thus, core inflation of 2.5% or higher would be needed to "symmetrically" balance to 2%.

In plain English rather than Fedspeak, Powell suggested a pronounced rise in core inflation, well above 2%, and for a sustained period of time would be needed to start thinking about raising rates again. Structural conditions and cyclical dynamics both argue a sustained rise in core inflation above 2% is extremely unlikely, and thus, the conditions for a rate hike, outlined by Powell, are unlikely to be met.

If we pull the chart of inflation back several decades, we can see a secular decline in inflation. This picture is consistent across various inflation metrics and market-based inflation expectations. 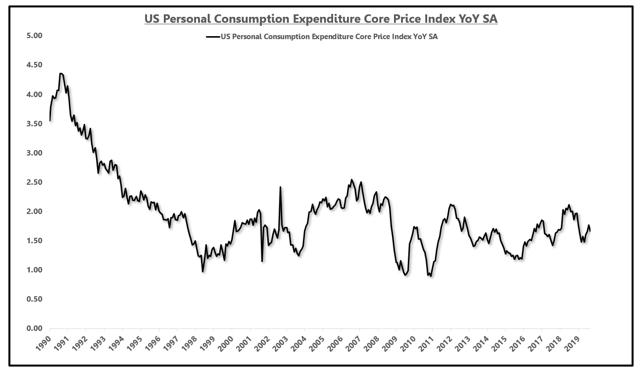 Structural disinflation across the global economy will be an ongoing obstacle to central banks wishing for accelerating rates of price pressure. A global (and domestic) decline in population growth and a growing debt overhang will work to keep a lid on commonly cited inflation metrics.

From a cyclical standpoint, an inflation spiral can emerge from changes in local currency, monetary aggregates, wage pressure, and commodity prices.

The Trade-Weighted Broad US Dollar Index has pulled back about 3% from the highest level recorded since 2001. The rate of change is important, and a continued decline could boost inflationary pressure, but the current strength of the USD is more of a disinflationary force.

Our internal measure of global money supply growth bottomed in January 2019 but has sustained an anemic acceleration to a significantly lower high relative to the 2016 global reflation trade.

The employment slowdown has captured the attention of many business cycle analysts as the growth rate in private nonfarm payrolls slipped to the lowest level since March 2011 in the latest report. These figures will be revised lower in February 2020 as the BLS completes their benchmark data-revisions.

The price of industrial commodities signals anything but a sustained rise in inflation. 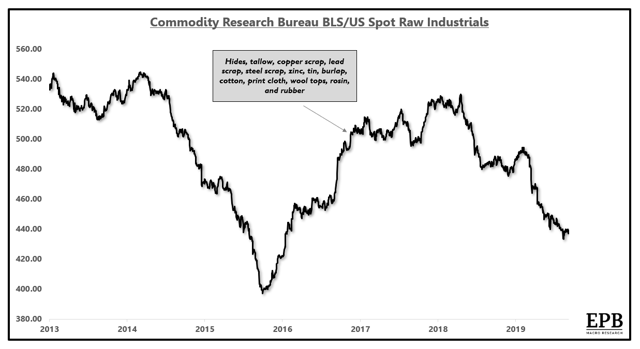 Chairman Powell outlined a set of conditions that will be difficult to meet, given the structural disinflation plaguing the global economy. Disinflation has been a trend that has been in place since the 1980s, mainly attributable to population growth and the rapid accumulation of unproductive debt.

From a cyclical standpoint, transitionary spurts of inflation will come and go as cycles continue to cycle.

A sustained, multi-quarter rise in core inflation above 2%, something that has not occurred once in the last ten years, remains a low probability outcome.

It is important to note that the Fed raised rates and tightened monetary policy from 2016-2018 without these conditions being met.

The Fed can raise rates again if they shift their framework. If they are relying on core inflation of 2.5%, we might be waiting quite some time for the next hike in the Federal Funds rate.

Start Using The Economic Cycle To Your Advantage

If you understand the sequence of economic cycles, you can profit from the opportunities that emerge from its predictable ebb and flow.

You have nothing to lose by joining for free but if you learn how to navigate the economic cycle, it will change the way you invest forever.

Follow Eric Basmajian and get email alerts
+
Add a comment
Disagree with this article? Submit your own.
To report a factual error in this article, click here.
Your feedback matters to us!