Once a stock is in the penalty box, it's difficult to get it out. New Relic (NYSE:NEWR), the infrastructure software company behind several widely used performance monitoring solutions, falls squarely into this category. After reporting weaker renewal rates last quarter owing both to international weakness and a shift in the company's sales org to a regionally-based reporting structure, shares of New Relic lost half of their market value. After several feeble attempts to recover in the subsequent months, New Relic fell again another ~7% after reporting second-quarter results - despite strong results.

Let's cut to the chase: I believe New Relic is one of the best value opportunities currently out there in the software sector. No investor wants to hear about growing pains, especially in the company's sales org - but ultimately, these are short-term issues that distract from the fact that New Relic is the best-of-breed vendor that virtually invented the category of infrastructure monitoring.

The business metrics that investors were worried about last quarter (namely, dollar-based net retention rates) saw a mild improvement in this quarter, and New Relic also raised its full-year revenue outlook to $588-$593 million, higher than consensus at $589.3 million and slightly higher than last quarter's slashed forecast of $596-$593 million.

In spite of this, the company still trades at bargain-basement valuations. At present share prices around $62 (45% below year-to-date highs of $109), New Relic trades at a market cap of $3.63 billion. After netting out $777.5 million of cash and $416.3 million of convertible debt on New Relic's balance sheet, we arrive at an enterprise value of $3.29 billion.

That represents a modest valuation multiple of 5.6x EV/FY20 revenues, based on the midpoint of New Relic's latest revenue guidance. Recall that in the past, New Relic traded at valuation multiples in the low teens - even though growth has slowed down to <30% y/y versus growth in the high 30s last year, I don't see that as warranting a ~50% valuation cut.

There's also no doubt that New Relic is still playing in a hot sector. One of New Relic's only competitors, the New York-based startup Datadog (DDOG), recently went public and is trading at a >20x forward revenue valuation.

In time, sentiment will improve on New Relic as it notches a few more quarters of solid results to wash away the memory of 1Q20. In my view, the stock is worth at least 8x EV/FY20 revenues (still at a discount to historical averages, owing to the near-term sales uncertainty), implying a price target of $87 and 40% upside from current levels. Stay long here.

If there's one thing we can say about New Relic, it's that investors and Wall Street just aren't expecting much from the company anymore - setting it up perfectly for nice beats. Here's a look at the company's latest second-quarter results: 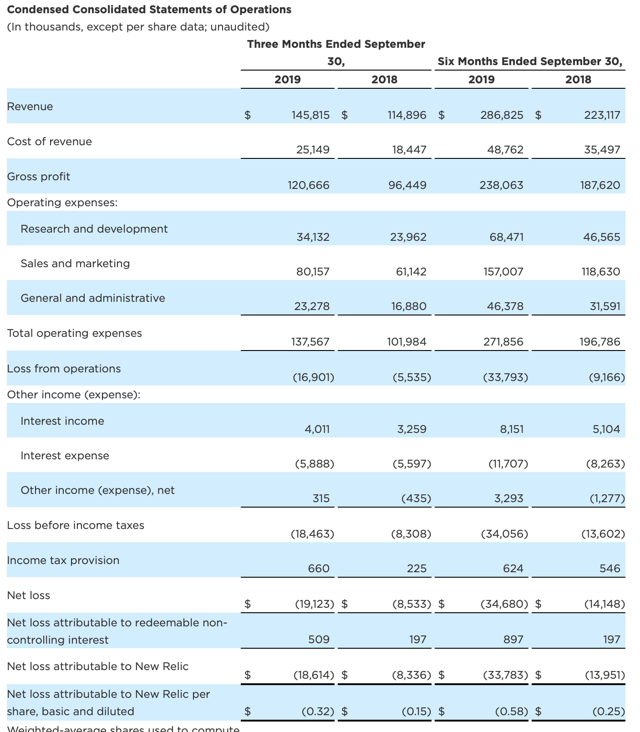 Revenues grew 27% y/y to $145.8 million, which decelerated three points relative to last quarter's 30% y/y growth rate, but was altogether expected thanks to last quarter's sales warnings. New Relic still came in two points ahead of expectations at $143.4 million, or +25% y/y.

Underneath the hood, we also saw a lot of positive trends in the key business metrics that scared investors off last quarter. In particular, we note that the company's dollar-based net retention rate jumped back up to 112% this quarter, three points stronger than last quarter's nadir of 109%. We note as well that New Relic's average annualized revenue per business account continued to march to new all-time highs at >$34,500 this quarter, indicating that New Relic continues to see success in upselling its customer base (albeit at a lower upsell rate than in prior years).

From last quarter's earnings commentary, we learned that a lot of the company's sales issues were due to a lack of sales hiring (a common theme across the software sector - many fast-growing SaaS companies, like Pluralsight (PS), have failed to keep up sales hiring at an appropriate pace to support revenue growth). New Relic has taken steps to remedy that this quarter, but CFO Mark Sachleben noted that most of these hires (150 net new heads in the quarter) were back-end loaded. It will take time for new sales hires to ramp up and become full quota-carrying reps, but eventually once New Relic can seed its key territories with tenured salespeople, we should see a recovery in revenue growth rates.

We believe we have executed well on our strategic imperatives outlined during our last earnings call, extensibility and programmability and we are acutely focused on driving better results from our go-to-market organization in the second half. The initial phase of establishing regional go-to-market hierarchies is complete and we expect to be in a position to better leverage our scale, significant installed base and the entire observability platform going forward.

We then strengthened our leadership team on October 1st by welcoming Mike Christenson to an operating role at New Relic as President and COO. Mike is a seasoned executive with deep familiarity not only with our space, but our company has the know-how and experience required to drive us beyond $1 billion in annual revenue. He also adds capacity to our team, which affords me the bandwidth to allocate the majority of my time to driving strategic product initiatives.

With these changes in place, plus the expansion of our observability platform, I'm increasingly confident in our ability to execute in the second half. In fact, we are experiencing early signs of success with accounts that participated in beta versions of our newest platform capabilities."

In short - New Relic has taken steps to correct the slowdown in performance over the past two quarters, and the worst may be behind us as the company beefs up its sales org and clarifies its go-to-market structure.

And despite the sales turmoil, we note as well that New Relic maintained strong profitability results. Pro forma gross margins remained high at 84%, at the high end of the company's long-term target range of 80-84%. Pro forma operating margins also held flat at 8%, higher than full-year results in all prior years: 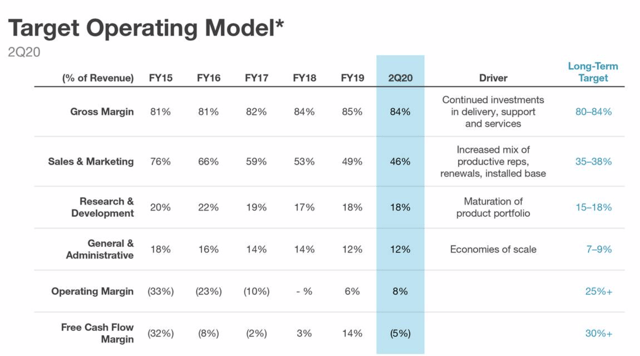 Buy New Relic while market sentiment is still weak. Though it's true that the company's top-line performance has considerably weakened from last year, we can bank on a near to medium-term recovery as the company strengthens its sales force. From a product perspective, New Relic still remains king of the hill - in August, a Gartner survey named it the top-ranked solution for Application Performance Monitoring - so there's little concern for the company's long-term demand and growth trajectory. At just 5.6x forward revenues, the risk-reward profile is heavily tilted in favor of bulls - stay long and wait for the rebound.

Gary Alexander
23.79K Followers
Author of Daily Tech Download
Curated research on high-performing tech; winning trades closed monthly
With combined experience of covering technology companies on Wall Street and working in Silicon Valley, and serving as an outside adviser to several seed-round startups, Gary Alexander has exposure to many of the themes shaping the industry today. He has been a regular contributor on Seeking Alpha since 2017. He has been quoted in many web publications and his articles are syndicated to company pages in popular trading apps like Robinhood.
Follow

Disclosure: I am/we are long NEWR. I wrote this article myself, and it expresses my own opinions. I am not receiving compensation for it (other than from Seeking Alpha). I have no business relationship with any company whose stock is mentioned in this article.