Note: The first part of this article was released to members on September 17, 2019.

We, therefore, recommended swapping from SMHD to ETRACS Monthly Pay 2x Leveraged US Small Cap High Dividend ETN (SMHB), in similar vein to what we do with our patented CEF rotation strategy, "compounding income on steroids".

Therefore, the recommendation is made to switch from MORL to MRRL, and to switch from SMHD to SMHB. The latter "Series B" ETNs track the same index as the original Series A ETNs, and are in most respects identical except for a minor issue of co-guarantor status. Importantly, since sales for the Series B ETNs have not been suspended, they trade at negligible premium/discount values most of the time.

Let's see how the recommendation has fared 3 months later!

Since June 10, SMHB has registered a total return of +0.35%. Not great, but still significantly ahead of SMHD's -13.86% return. This recommendation generated a massive alpha of +14% in only 3 months, equivalent to nearly 10 months' worth of distributions from either fund! 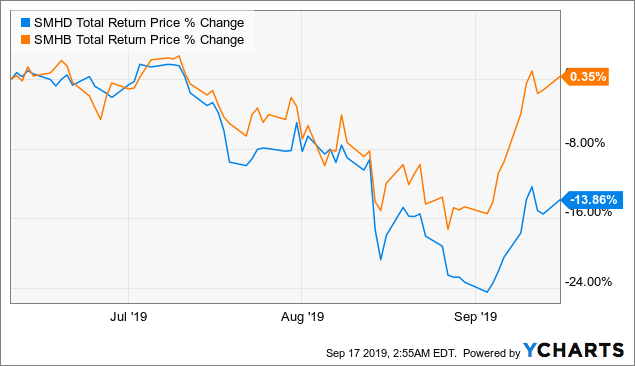 What happened? Don't these two funds track the same exact index? Astute members will already have guessed the answer: SMHD's premium has shrunk significantly. As of yesterday's close, the premium is down to 18 cents or +2.47%.

And therein lies the danger of ETN premiums. Because swap partners are readily available in the form of the Series B ETNs, there is no economic benefit to holding the more overvalued fund. Previously, when the Series B notes were still relatively new, there was a case to be made that their lower liquidity could still promote a preference to the more expensive and also more liquid, Series A ETNs. However, as we wrote about in last month's "Increased Volume For MRRL Reduces The Case For MORL", this difference in liquidity has all but disappeared.

For anyone holding MORL, which is still at a sizable +7.86% premium, I would suggest swapping to MRRL for the same reason. Don't let mean reversion catch you out!

Since we published this note to members in September warning them to switch from MORL to MRRL, here is what has happened: 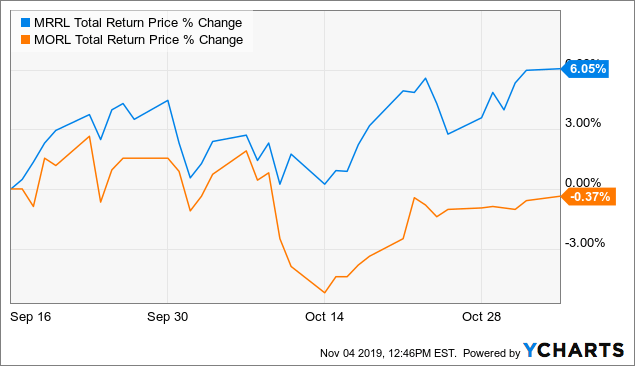 MRRL has outperformed MORL by over 600 bps in only 1.5 months, equivalent to over 4 months' worth of distributions from either fund.

The reason, as you'd expect, is MORL's shrinking premium. As of writing, the premium is now down to 18 cents.

The message of the story is simple: don't let ETN premium reversion catch you out.

At the CEF/ETF Income Laboratory, we manage market-beating closed-end fund (CEF) and exchange-traded fund (ETF) portfolios targeting safe and reliable ~8% yields to make income investing easy for you. Check out what our members have to say about our service.

Disclosure: I am/we are long THE PREMIUM PORTFOLIOS. I wrote this article myself, and it expresses my own opinions. I am not receiving compensation for it (other than from Seeking Alpha). I have no business relationship with any company whose stock is mentioned in this article.