Equinix (NASDAQ:EQIX) may face more competition from Digital Realty in Europe after the latter's purchase of Interxion closes in 2020, which significantly increases its presence in the region. Equinix, which also has a history of M&A, continues to expand. Its partnership with GIC and purchase of Axtel's data centers for $175 million (1Q expected close) support the goal of $7 billion in annual revenue by 2022. Equinix is leaning on fast-growing enterprise customers and M&A to drive revenue growth, which is on track to be just shy of 10% this year -- near the top end of the 8-10% annual target rate.

Data-center REITs are relying on differentiated offerings, worldwide presence, and superior service to earn business from new and existing customers because, though demand is strong and growing, competition is also stiff. Oversupply, which may come from too much building as well as shrinking of the servers and other technology within data centers, could add pressure to rent growth. Northern Virginia, the largest data center market in the U.S., has gotten exceptionally competitive, but data center REITs are still building there.

Digital Realty's (DLR) active development pipeline, for example, tops $1 billion as it plans to add over 90 megawatts, including 36,000 in Northern Virginia and about half that each in London, Frankfurt, and Osaka. CyrusOne (CONE) is adding 82 megawatts, also heavily weighted in those markets, except for Osaka. 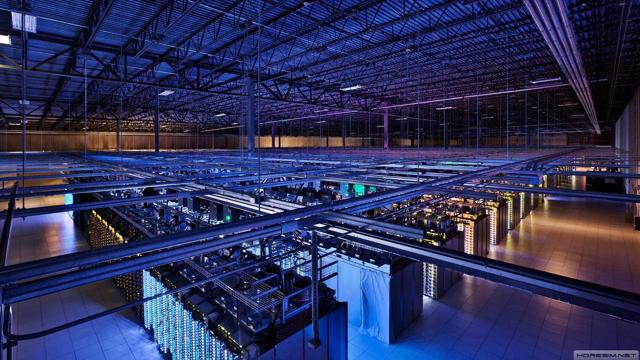 Data center REITs continue to expand around the globe through M&A as well as development to satisfy red-hot data center demand, which doesn't appear likely to decrease anytime soon. Cisco (CSCO) forecasts that global data center traffic will grow at a more than 20% compound annual rate through 2021.

Industrial-REIT development yields have similarly weakened to 6-7% on average due to higher labor and construction costs, as well as the mix of build-to-suit vs. speculative projects. Warehouse demand is on track to closely match supply in 2019, akin to the U.S. data center market.

Global presence and customer relationships are essential for data center revenue growth. Equinix, the leader in interconnection, says about 90% of its quarterly revenue gains come from its installed base of customers. Its higher-margin interconnection revenue continues to rise at a rapid pace, though growth has decelerated from late-2017 and early-2018 levels, as you can see below.

Data center rent is dependent on scale, connectivity, and power. Construction requires much more than a warehouse-like building shell, with the critical electrical, mechanical, and cooling systems accounting for more than half of the ground-up development costs. Location is driven by multiple factors, including local power and labor costs, as well as the ability to directly connect to other customers and gain secure access to multiple clouds. An example of such features is cross-connectivity. The chart below illustrates Digital Realty and Equinix cross-connects.

Cross-connects are used to enhance performance, lower latency (the time it takes to transmit information), and improve traffic flow management. They can produce a more consistent and stable experience than Internet-based connections. They are also a valuable means for minimizing data loss and promoting disaster recovery when emergencies occur. It is essential that a data center REIT can accommodate cross-connects, and Equinix seems to be successfully delivering these services.

Further adoption of hybrid-cloud services, especially by enterprises, will support Equinix's goal to boost adjusted Ebitda by 50% from 2017 levels to the $3 billion levels by 2022. It is on track to end this year more than halfway there, leaving just 5% annual growth needed for 2020-22.

Enterprises Are Key to Ebitda Growth

Enterprise customers accounted for 19% of 1Q revenue, vs. 14% in 4Q16, but still less than cloud and IT services (28%), network (24%) and financial services (16%) customers. Enterprises are likely to remain a key driver to reach its Ebitda target, which may be less driven by significant M&A.

Equinix has used M&A to establish or expand its presence in several high-growth markets around the globe. Future acquisitions will likely follow a similar strategy, though maybe smaller and less transformational than Telecity (purchased in 2016 for more than 2 billion pounds) or the Verizon data centers, which were acquired in 2017 for $3.6 billion and took over a year to fully integrate into Equinix's portfolio. Equinix will likely seek to broaden its geographical reach and could use M&A to keep expanding in markets such as South Korea, Africa, India, Thailand, and China. Over half of Equinix's recurring revenue comes from customers with needs in the U.S., Europe, and Asia. I believe that such purchases are vital to keeping the company's portfolio diversified. 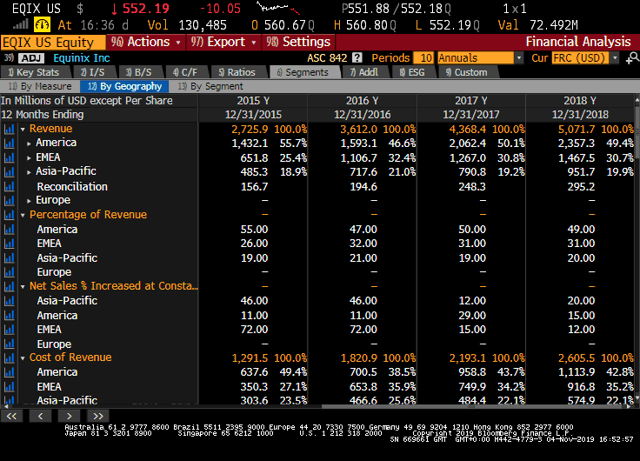 Assets Equinix acquires are generally less interconnected than its own and often require investments to improve growth. 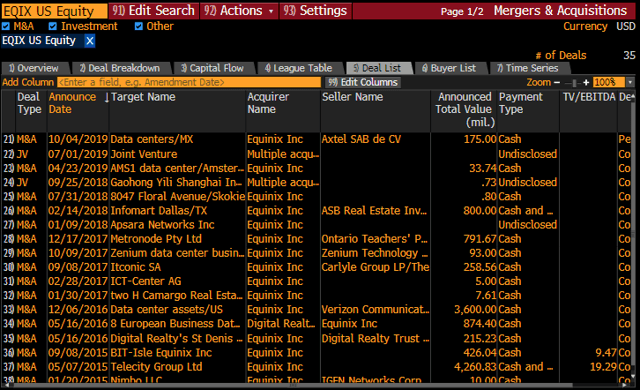 Annual Dividend Is Among REITs' Highest

Equinix became a REIT in 2015 and paid out an annualized rate of $9.84 a share. Excluding special dividends, its payout has risen at a compound annual rate of about 10% from 2015-19, and growth will likely persist amid continued gains in funds from operations per share. 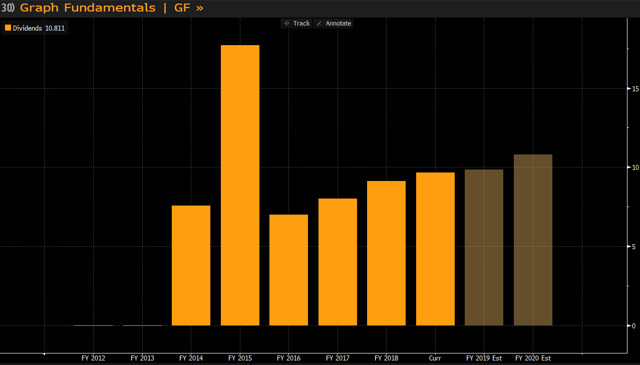 Equinix's dividend implies a below-average and less than 44% payout ratio based on management's raised guidance for $22.37-$22.73 in funds available for distribution, leaving room for further dividend increases. Analysts expect Equinix's dividend to rise 9% in 2020 to an annualized rate of $10.75, slightly stronger than 2019's 8% increase, yet weaker than its four-year average

Equinix's adjusted FFO-per-share growth has slowed from late-2017 and early-2018 levels but should extend amid active data center and interconnection demand. Management expects $5.5-$5.6 billion in revenue this year, almost 10% higher than 2018 (the upper end of its 8-10% annual revenue growth target through 2022), and for the Ebitda margin to remain similar to the prior year. Yearly revenue increases combined with portfolio expansion through development and acquisitions will support further growth in FFO per share. Yet gains could be partially offset by higher interest expenses if expansion is funded with additional debt, or a higher share count if Equinix uses equity.

Equinix guidance calls for a 9% increase in funds available for distribution, weaker than 2018's 11.7%.

Equinix Revenue Growth Slows, but Goal is in Reach

Equinix's lowered revenue forecast of $5.554-$5.564 billion for 2019 reflects foreign exchange headwinds and a deceleration in growth to 8.8% in 3Q. Management's projection suggests further slowing to about 8% in 4Q, but for the year, the data center REIT should still be near the high end of its 8-10% annual target. Continued strength in bookings (new-lease rent) -- which reached a 3Q record this year -- will remain a key revenue driver into 2020, even though M&A has picked up again. Equinix's outlook calls for adjusted funds from operations per-share growth of 8% on a constant-currency basis. I remain confident in the company's near-term future Net Income margins(%) on the rise. I don't see any reason for the demand in data centers to decline, which should further improve operating margins as Equinix keeps on growing its portfolio.

Equinix is an industry leader in the data center space. Its series of acquisitions continues to yield high returns in the range of 8%-10% while improving margins on the way even further. I believe that the stock is an excellent dividend-growth play in the space. The demand for data centers is enormous, and even if it experiences a temporary slowdown lately, Equinix is well-positioned to keep delivering high returns through its recurring rental model. REITs prices have skyrocketed, so I will probably wait for a lower entry point shortly, hopefully.