Axsome Therapeutics' (NASDAQ:AXSM) is a small-cap biotech company specializing in treating psychiatric and central nervous system disorders. The company's most promising drug candidate, AXS-05, is being investigated for 3 indications, with topline data anticipated by the end of FY2019. After an evaluation of all relevant clinical data, investor presentations, and medical journals, the author comes to the conclusion AXS-05 is likely to witness success in its investigation for treating major depression disorder (MDD), but may not achieve its investigational goals for targeting treatment-resistant depression (TRD) and Alzheimer's disease. Nevertheless, the success in one indication alone will more than justify AXSM's entire valuation and assign the stock a buy rating. Without further ado, let's take a look as to why. 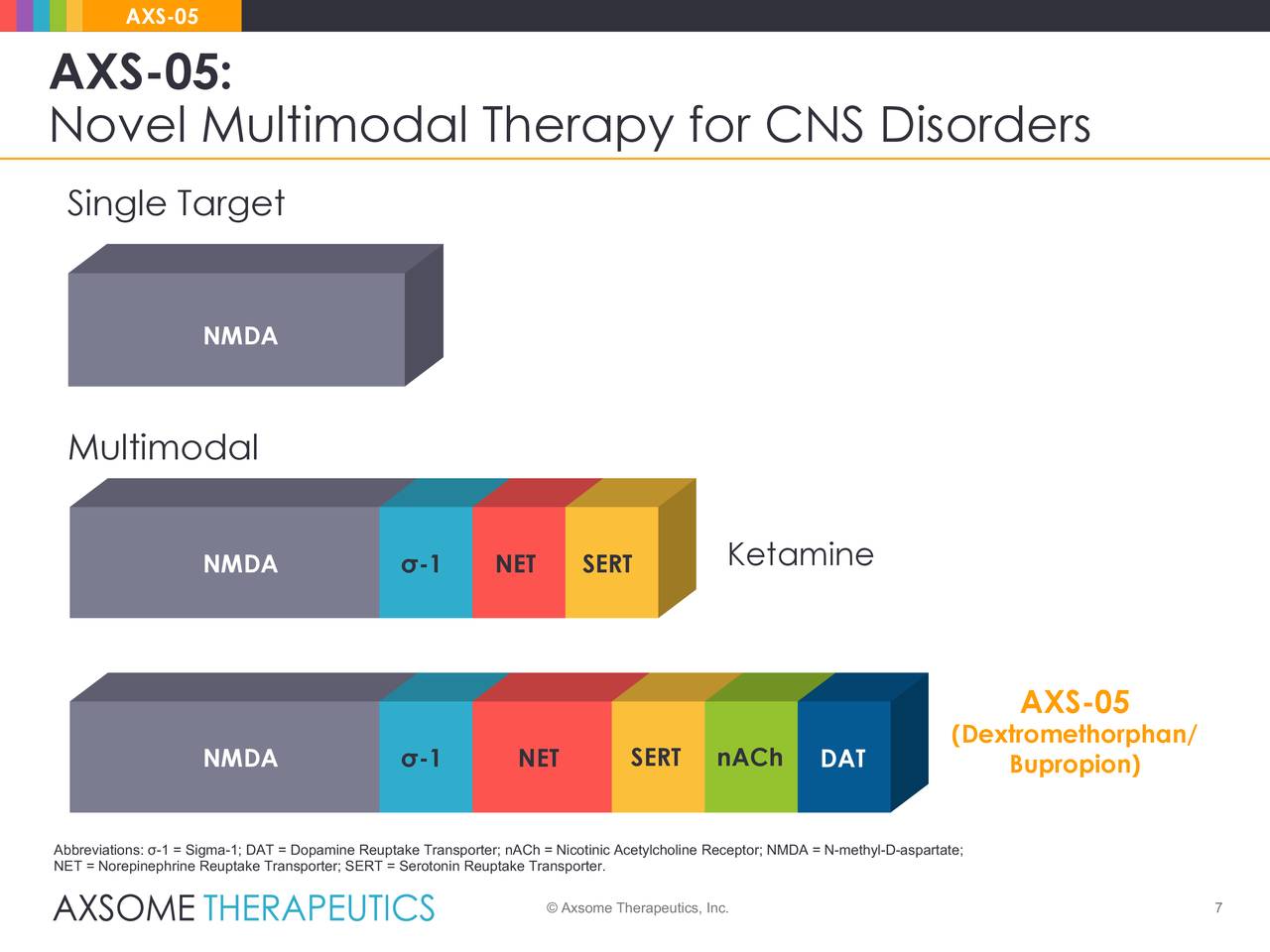 Currently, the only appropriate treatment for TRD consists of ketamine-based NMDA antagonists and its derivatives (such as Johnson & Johnson's (JNJ) esketamine). Unfortunately, such class of drugs have only demonstrated marginal clinical significance against TRD. Subjects in esketamine's treatment arm, for example, only demonstrated a 4-point reduction against the placebo arm on the 60-point MADRS scale for evaluating symptoms of depression. Moreover, esketamine is an intranasal spray which has severe adverse side effects with patients at risk of psychosis and suicide. Although there exists a large multi-billion dollar market for treating TRD, very few drugs have the potential to possess the right risk-reward profile for effective treatment.

AXSM, however, may possess an investigational candidate, which is able to address symptoms of major depression at the very least. The company's AXS-05 is both a norepinephrine and dopamine re-uptake inhibitor (bupropion) and an NMDA-receptor antagonist (dextromethorphan) that is currently in Phase 3 clinical trials for both treatment resistant depression and major depressive disorder. It has been hypothesized (but not yet experimentally verified) bupropion serves to increase the bioavailability of dextromethorphan, thereby effectively targeting TRD and MDD via synergistic effects. So far, at least one study has demonstrated an adjuvant therapy of dextromethorphan, and bupropion is not effective at producing an antidepressant response for DMX dosages < 45 mg. Luckily, AXSM seems to have accounted for this in its clinical trials as AXS-05 consists of 60 mg DXM and 150 mg BUP. The clinical data in Phase 2 also seems to verify this hypothesis.

Moreover, AXS-05 is a multinodal drug targeting up to 6 receptors in the central nervous system. This allows AXS-05 to treat non-psychiatric disorders affecting the brain, the most promising of which is that of Alzheimer's disease. Clinical evidence for such class of indications shall be analyzed below. 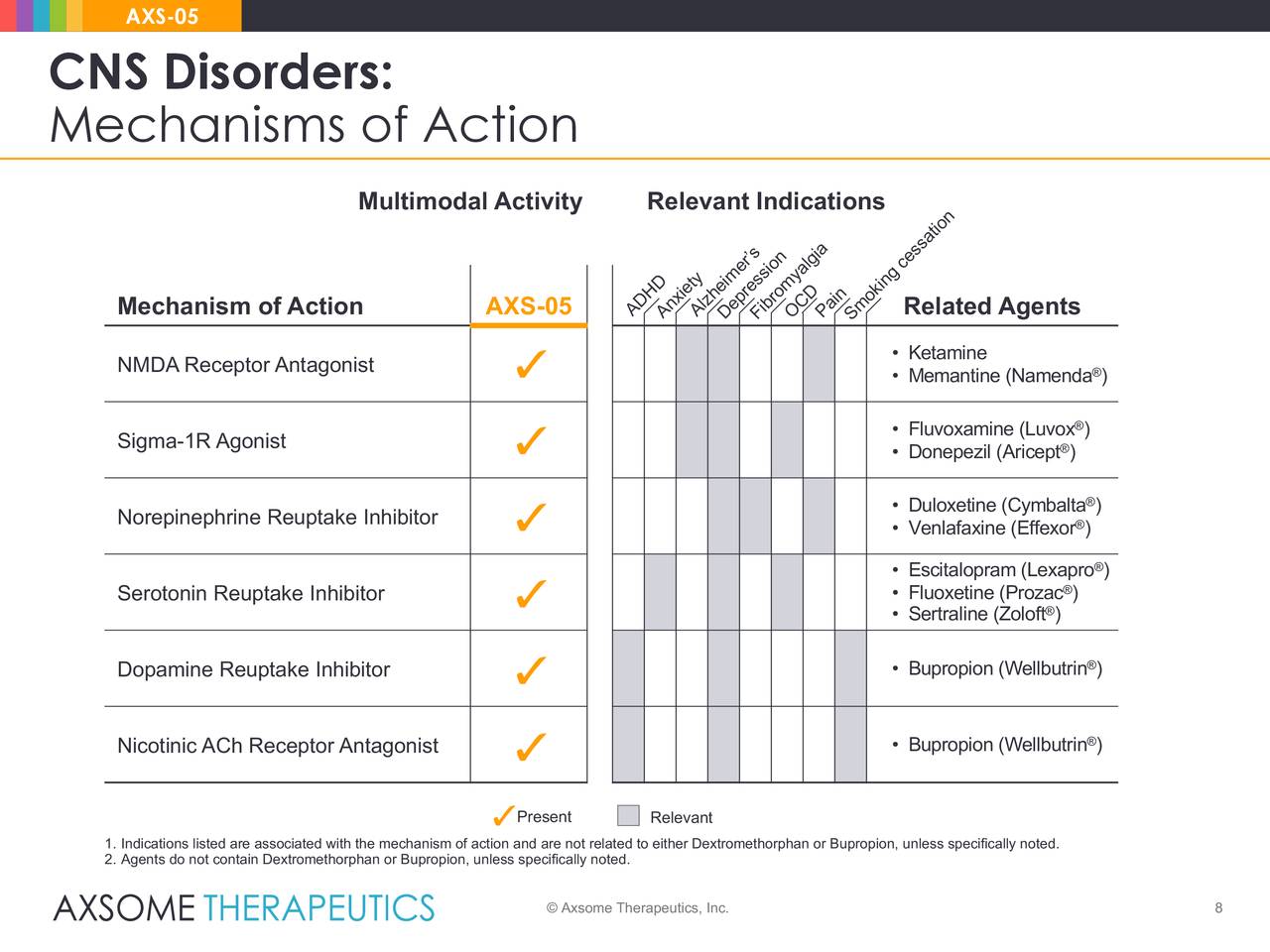 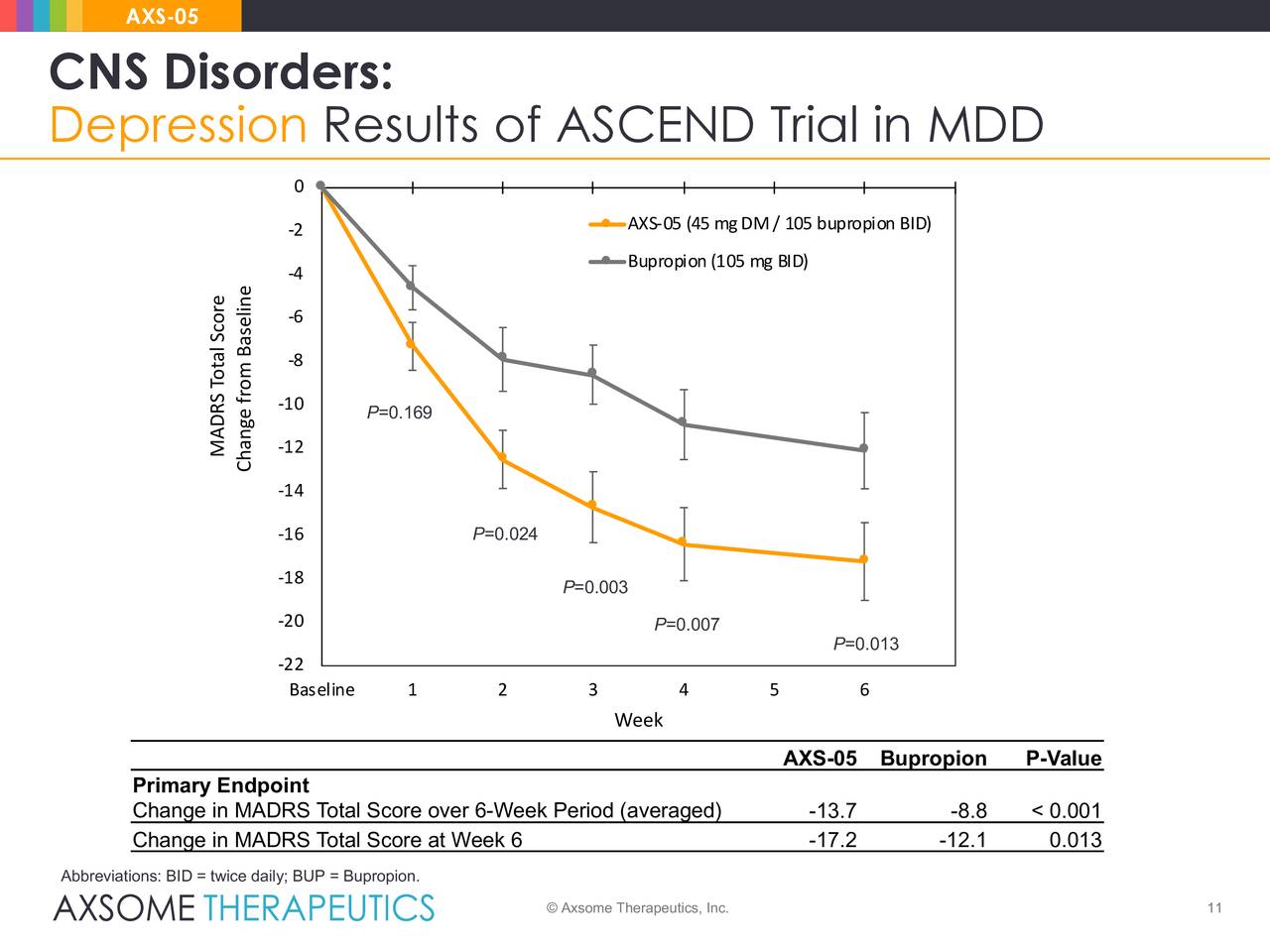 In its Phase 2 data release, AXS-05 demonstrated a 5-point reduction on the MADRS scale against bupropion. Considering most patients with MDD have a MADRS score >30, the drug is thus able to beat the 10% margin the FDA guided for approval of candidates in non-inferiority studies with robust statistical significance (p<0.02). In terms of safety, there were no serious adverse events reported in the trial. More specifically, AXS-05 was found to not possess any association with psychotomimetic effects, weight gain, or sexual dysfunction. This is a substantial improvement over bupropion, which is known to have a serious risk of developing suicidal tendencies after chronic use. Even better, AXS-05 was found to not induce somnolence in patients being treated, which is a side effect of nearly every single drug used to treat depression. While synergistic use of AXS-05 with alcohol has not been documented, should the drug's formulation allow such use, then its safety profile will be far beyond that of both Prozac and Wellbutrin, and may very well lead to AXS-05 becoming the first line of treatment for MDD. 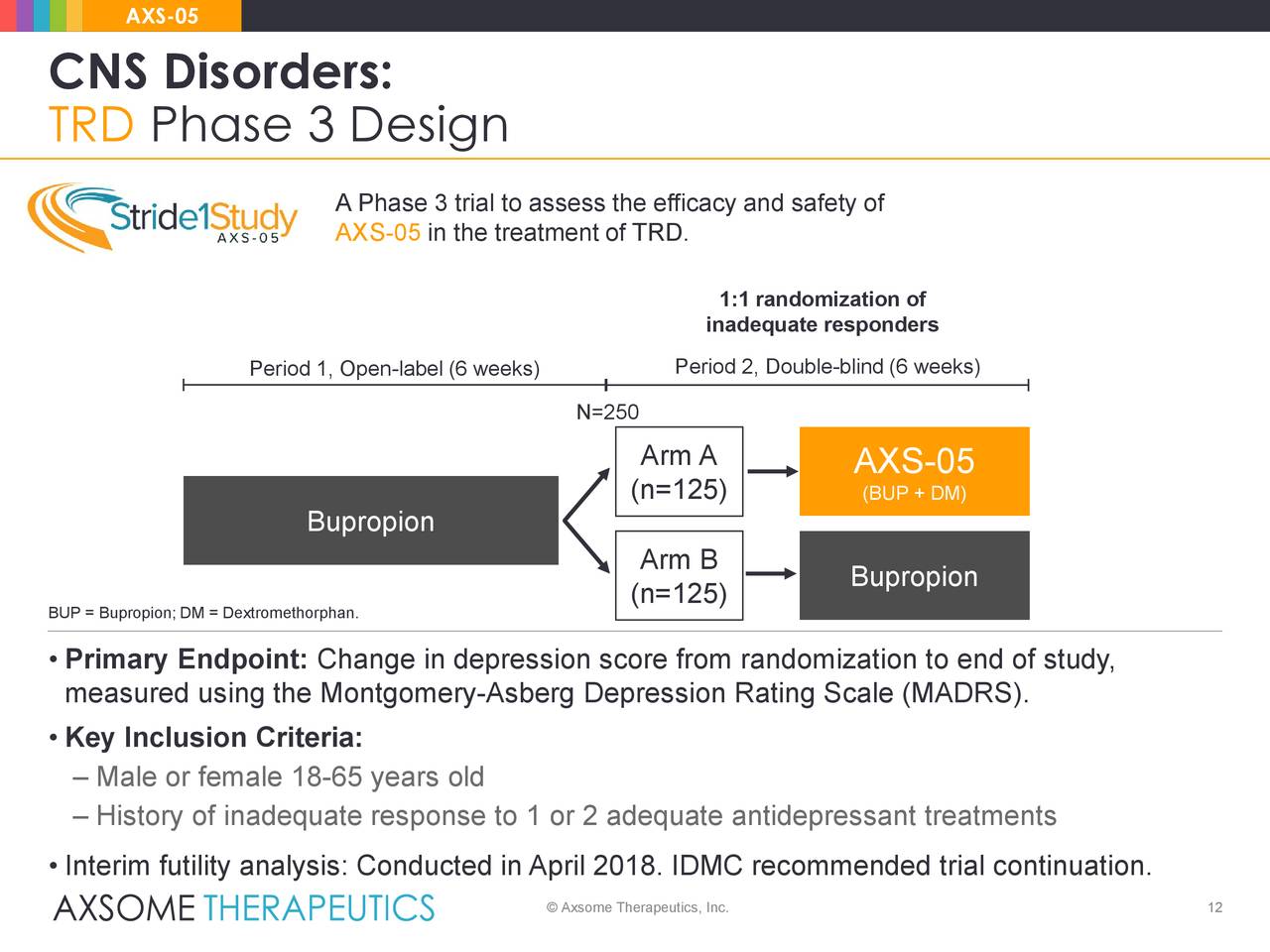 While the company's results in AXS-05 should be applauded, the drug's Phase 3 clinical trial targeting TRD may be overly ambitious. It is estimated 45% of patients with MDD currently experience TRD, which is defined as nonresponsiveness to at least 2 antidepressant therapies. Intuitively, this will suggest the standard of care arm in AXS-05's clinical trial above will not work. This is rather troublesome, as AXS-05 was only able to demonstrate 15-20% improvement vs. bupropion for MDD in Phase 2. Given the similarity of selection criterion between the two trials, and TRD being much harder to treat than MDD, it is likely AXS-05 will not be able to replicate its clinical effect for MDD at an acceptable level of statistical significance for TRD. While an intelligent investor may argue the drug is unlikely to observe any psychotomimetic effects as per such carry-over analysis, the drug being not able to meet its primary endpoints still remains a major investment risk and will result in rejection if submitted to the FDA. 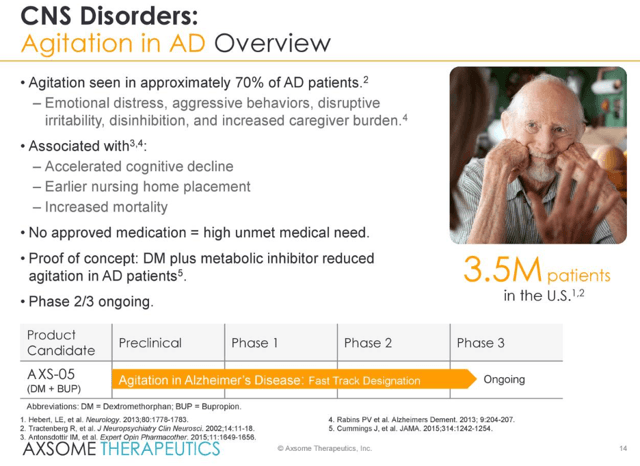 Despite the industry's repeated efforts, there has not been a new drug approved for Alzheimer's for over 15 years. While AXS-05 does not slow down the brain's neurodegeneration, the drug has been theorized to reduce symptoms of agitation in patients with AD. Agitation includes emotional distress, aggression, irritability, and disinhibition. Agitation is unpleasant for the patient, stressful for caregivers, and may lead to earlier placement in nursing home facilities. Over 70% of AD patients are estimated to show symptoms of agitation. The total addressable patient size is likely that of 3.5 million per year in the United States. Nonetheless, the drug does not possess any medical research regarding whether or not its theoretical mechanism of action is plausible. Furthermore, although an interim analysis release by an independent data monitoring committee recommended trial continuation, such conclusion was only based on 30-60% of the data analyzed. Therefore, caution is required for investors before speculating too much on AXS-05's potential outcome for the AD indication. 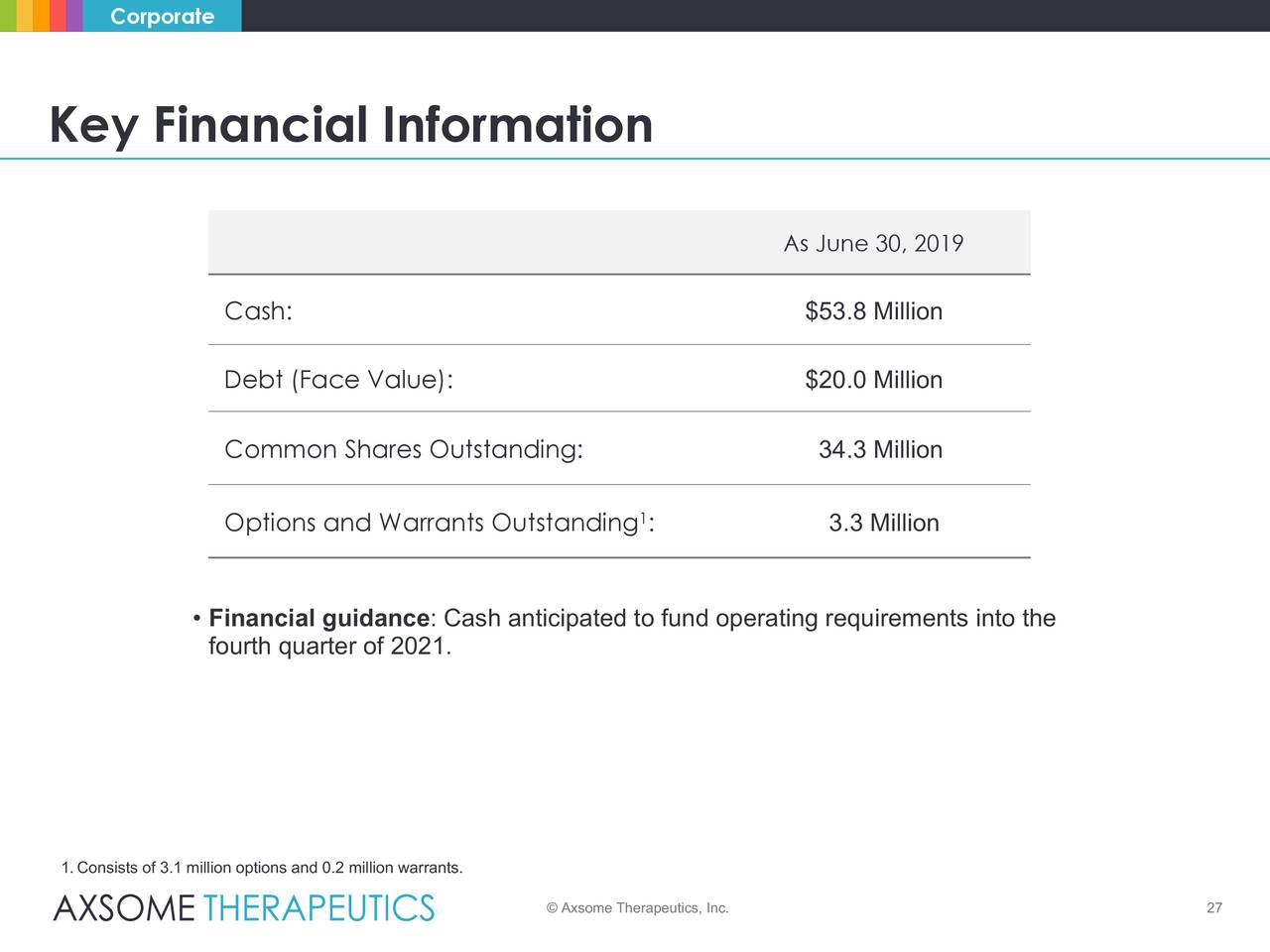 With $53.8 million in cash, $20.0 million in long-term debt, and operating at an estimated annual loss of $36 million, AXSM should have enough capital to keep its research expenses in check until FY2021. Fortunately, for shareholders, the vast majority of the company's cash flows are spent on organic R&D, coupled with reasonable executive compensation and negligible stock option dilution. 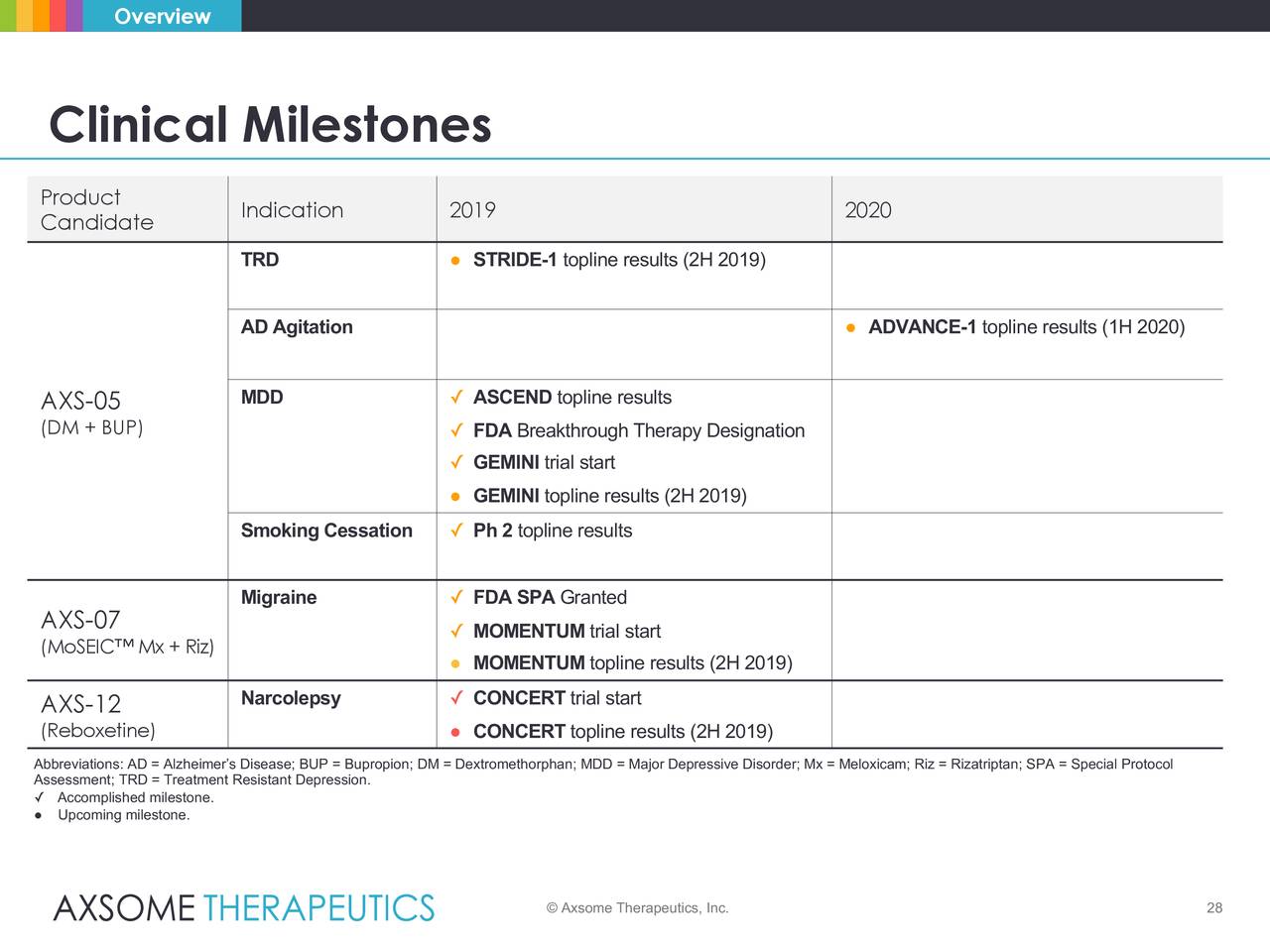 Moreover, nearly all of the company's Phase 2/3 clinical trial results are due by the end of FY2019. This possesses several welcoming catalysts for shareholders, as there will be no risk of stock dilution before organic R&D programs are finished. Aside from anticipated topline results for AXS-07 indicated for migraine headaches and AXS-12 indicated for narcolepsy on the horizon, the company's flagship candidate remains AXS-05 indicated for central nervous system disorders. Out of 3 possible indications, AXS-05 is likely to witness trial success for MDD and has the potential to become a first-line treatment in this multi-billion dollar market due to above-average clinical and safety profiles against competitors. Its other indications, however, are far from rosy. The drug is unlikely to meet the barrier to treating TRD and has little evidence supporting its theoretical efficacy in targeting agitation in patients with AD. Overall, AXS-05's MDD indication alone is more than enough to justify the company's $800 million valuation and will result in a buy rating for the company's shares.

Disclosure: I/we have no positions in any stocks mentioned, but may initiate a long position in AXSM over the next 72 hours. I wrote this article myself, and it expresses my own opinions. I am not receiving compensation for it (other than from Seeking Alpha). I have no business relationship with any company whose stock is mentioned in this article.