This article first appeared in Trend Investing on September 16, 2019; therefore all data is as of this date.

The US-China trade war has taken a heavy toll on most Chinese equity funds, especially when compared in USD terms (as the Chinese yuan has weakened). The growth rate is higher in China (GDP is 6.2% pa) than in the US (GDP is 2.3% pa) and the Chinese equity market is at a much lower valuation (China P/E 12.3, USA P/E 21.0). Just looking at the figures quoted above indicates that China is growing 2.7x faster than the US, and China's equity market is 41% cheaper, or almost trading at half the US valuation. 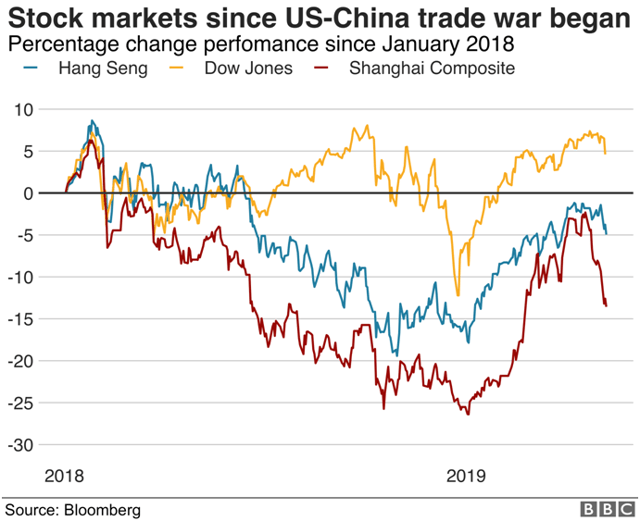 China is growing much faster than the US 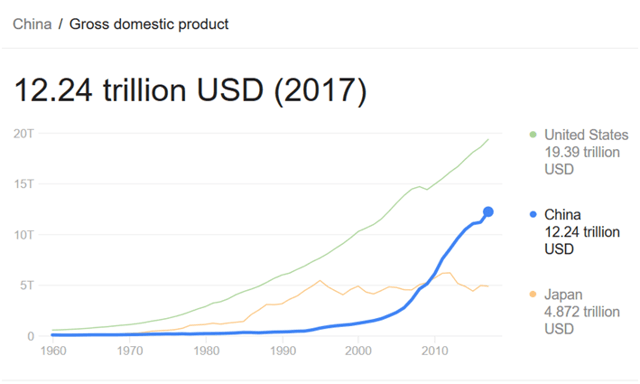 Some reasons to consider investing in China at this time

Note: Even after China's 2019 increased weighting in the MSCI Emerging Markets Index, China will still be only 3.3% of the index, yet China's GDP is ~19% of world GDP (adjusted for purchasing-power-parity in 2019). Even worse when we look at the iShares Global 100 ETF (IOO), China gets zero allocation. Clearly, there is room for further future increases.

The global economy - GDP per country in 2017 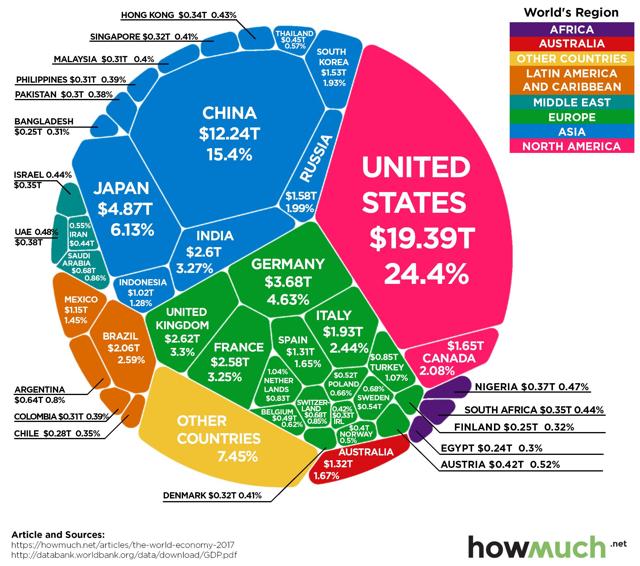 Shanghai is now a sophisticated metropolis 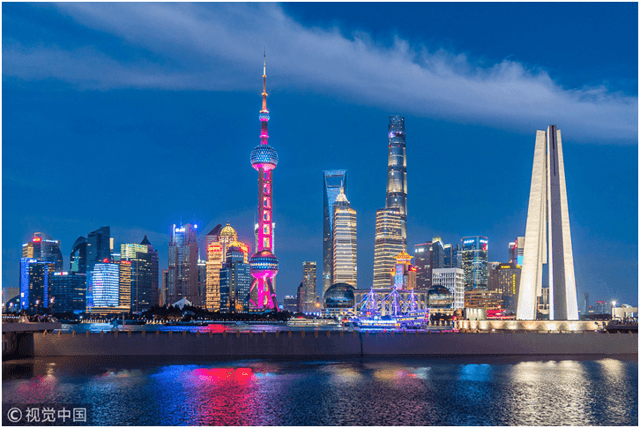 Some reasons for not investing in China at this time

China's debt is quite high (mostly due to corporate debt) 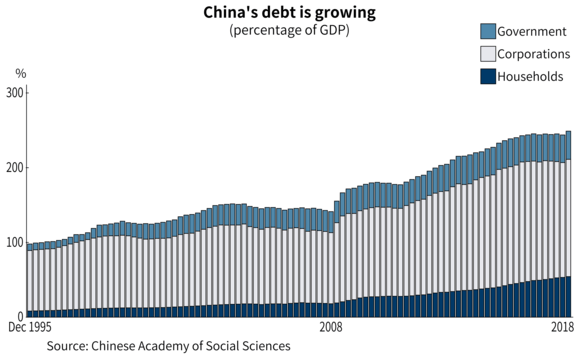 China urbanization - About 21m Chinese moved to the city in 2017 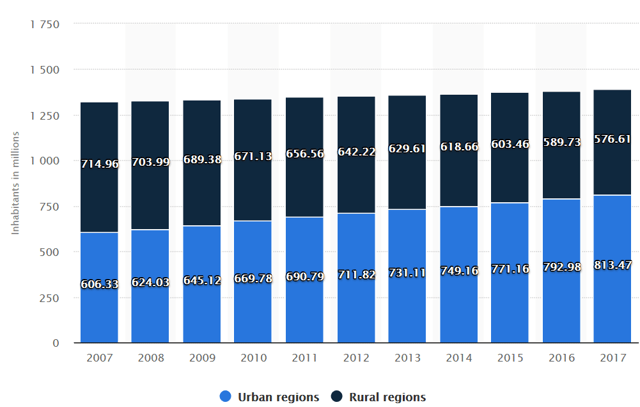 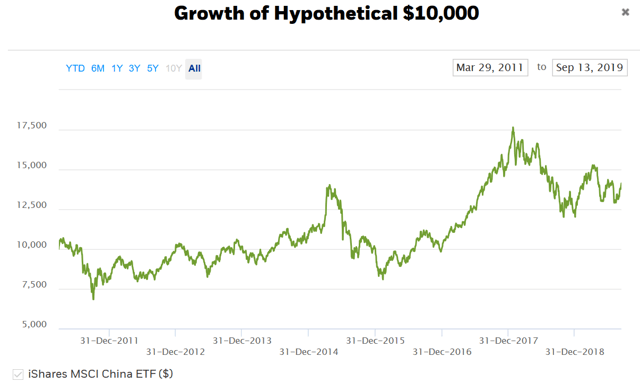 Of the above, I would choose one of the MSCI funds given the MSCI index change. Arguably, the iShares MSCI China A ETF should benefit most due to its A share focus.

My longer term pick would be the iShares MSCI China ETF as it has good exposure across several key sectors (tech, financials, communications) and a low P/E of 12.26. It also holds China's top two tech stocks in Tencent and Alibaba in large weightings. Each of these companies has a dominant market share, plenty of free cash flow, and investments into hundreds of other related companies.

Investors should definitely spend an hour and watch the video link below, to get a very good feel on what's happening in China. 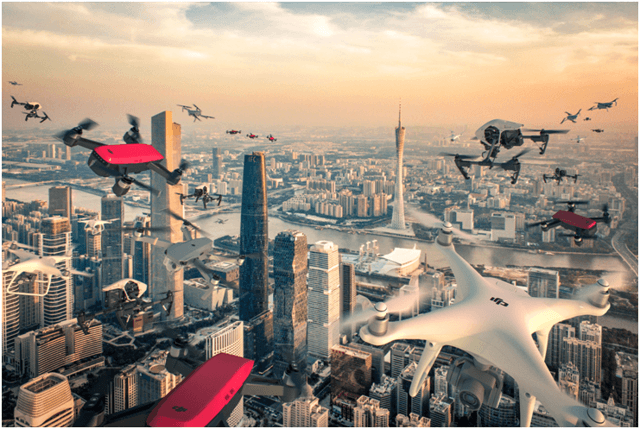 China is definitely under pressure due to the trade war and some excess debt; however, this is why most Chinese equities are trading so cheap. My view is that the negatives are priced in at this time. Sure, Chinese equities may fall further if the trade war worsens further, or they may recover sharply if we get a swift trade war conclusion. In any event, current cheap Chinese equity valuations now warrant some consideration.

Risks remain if the trade war worsens, and risk due to increased and new tariffs due to hit China on October 15 and December 15, 2019.

The old adage goes "buy low and sell high." The hard part is buying low always means sentiment is usually poor and uncertainty high - After all this is why fast-growing China is currently valued so cheaply.

Given the already weakened Chinese currency, low equity valuations, strong GDP, rising middle class, rising tech cities, and two decades ahead of urbanization and greater internet penetration, I think it is a good time to start an initial position in China. Raised and increased tariffs on China in the months ahead mean investors should not yet get carried away on China as more short-term pain could be ahead; however, a trade war solution would cause a sharp recovery in Chinese equities.

Thanks for reading the article. Sign up for Trend Investing for my best investing ideas, latest trends, exclusive CEO interviews, chat room access to me, and to other sophisticated investors. You can benefit from the work I've done, especially in the electric vehicle and EV metals sector. You can learn more by reading "The Trend Investing Difference", "Subscriber Feedback On Trend Investing", or sign up here.

Disclosure: I am/we are long MCHI. I wrote this article myself, and it expresses my own opinions. I am not receiving compensation for it (other than from Seeking Alpha). I have no business relationship with any company whose stock is mentioned in this article.