After combining with DuPont, Dow, Inc. (NYSE:DOW) re-established as an independent company in April 2019. While investors should be aware it has a heavy debt load, this enormous blue-chip is a long-time successful, international manufacturer of commodity chemicals with an ample, flexible supply of low-cost feedstocks.

Dow has year-over-year earnings upside and pays a substantial dividend of 5.2%.

Dow, Inc. is headquartered in Midland, Michigan and employs 37,000 people full-time. Started in 1897 by Herbert Henry Dow with a new method to extract bromine from brine, the company has a deep business history.

Most recently, it combined with DuPont into a $113 billion conglomerate. The two companies traded some business lines and then separated into three companies, all of which are now listed publicly: Dow, DuPont (DD), and Corteva (CTVA). Dow makes commodity (bulk, high-volume) chemicals such as polyethylene, silicone, and paint additives. DuPont makes specialty chemicals and Corteva makes agricultural seeds and chemicals.

Natural gas costs-as both a feedstock and an energy input-are key. The company is benefiting from the wide availability and low prices of U.S. natural gas and natural gas liquids.

Dow was in the news recently for an explosion due to a vessel rupture at its Plaquemine, Louisiana chemical plant; fortunately no one was injured.

In researching this company, investors should be careful not to confuse Dow, Inc., the chemical company, with the Dow Jones Industrial Average (DJIA).

Natural gas supply remains abundant-the generic price forecast is "lower for longer" especially as gas (and the slightly heavier natural gas liquids) are produced in association with more valuable oil in the Permian basin. Indeed, this associated production and lack of gas takeaway (pipeline) capacity recently kept Permian prices as low as $0.08/MMBTU, in contrast to Henry Hub, Louisiana prices of $2.28/MMBTU. On an occasion in the last year, the Permian gas price had even gone negative. 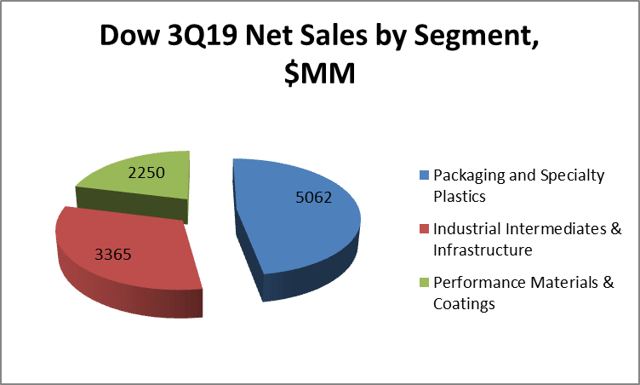 With quarterly net income of $347 million, earnings per share (EPS) from continuing operations was $0.45.

Generally, ethane, propane, and butane feedstock costs were higher in the third quarter of 2019 than a year ago and polyethylene product prices are not, resulting in a slight margin squeeze on polyethylene.

Moreover, the company experienced negative results from its largest joint ventures with Kuwait, Thailand, and the Sadara Project.

Domestic and international competitors to Dow are numerous. In the U.S., these include but are not limited to Eastman Chemical (EMN), the chemical division of Exxon Mobil (XOM), Huntsman (HUN), LyondellBasell (LYB), and Westlake Chemical (WLK).

Feedstock sector competitors should also be kept in mind: natural gas and natural gas liquids are used not only for chemical manufacture but are also exported as liquefied natural gas and liquefied petroleum gas. Additionally, natural gas is a central fuel in power generation, in industrial production and, of course, for residential and commercial heating.

Dow's flexibility to use different feedstocks in its U.S. ethylene crackers helped boost its third quarter margins. Feedstock flexibility will remain a competitive advantage for the company.

Growth projects this year include:

*retrofit of a cracker with propylene technology resulting in lower energy usage, emissions, and cost;

*launch of Agility CE- a new resin made with 70% post-consumer recycled plastic;

Dow, Inc. in its new incarnation does not yet have enough history to be ranked by Institutional Shareholder Services.

A negligible percentage of shares is held by insiders.

Book value per share from the most recent quarter of $23.47 is less than half of market price, implying very positive investor sentiment.

The company's ratio of enterprise value to EBITDA is an investor-attractive 8.7, below the preferred ratio of 10 or less.

A stock with a traditional blue chip history, "new Dow" pays a dividend of $2.80/share, currently a 5.2% yield. Additionally, in the third quarter it executed $100 million of stock buybacks.

The company's mean analyst ranking from twenty-four analysts is a 2.5, or between "buy" and "hold."

The company's five largest institutional investors at June 30, 2019 were: Vanguard at 8.2%, Blackrock at 6.9%, State Street at 4.8%, Capital World Investors at 3.9%, and Capital International Investors at 3.6%. Some of these institutions represent index fund investments that match the overall market.

Other institutions may be waiting for additional quarters of results before investing in "new Dow."

Many competitors and the boom-bust tendency to overbuild ethylene crackers could compress margins. Already, Dow has limited ability to raise its product polyethylene prices.

Given its 5.2% dividend and wide range of operations, I recommend Dow, Inc. to dividend-seeking investors who are comfortable with only a few quarters of financials for this reformulated but large, experienced company. Analysts' average estimate of EPS upside next year is 20% and feedstock costs are expected to remain favorable for years to come.

However, no situation is a long-term gimme: other sectors such as heating, power generation, crop drying, and LNG/LPG export will compete for the same inexpensive feedstocks Dow uses.

The real fly in the ointment is that Dow will have less flexibility until it pays down its heavy debt load, currently at 72%.

I hope you enjoyed this piece. I run a Marketplace service called Econ-Based Energy Investing which features my best ideas from the energy space, a group of more than 400 public companies. I offer three different portfolios for your consideration, as well as weekly in-depth articles, including a mix of portfolio reviews and company-specific deep dives. I'm bringing my experience from decades in the industry to this service to help investors deal with the ups and down of the energy sector. Interested? Get started here with a two-week free trial.