This article was selected to be shared with PRO+ Short Ideas subscribers - find out more here.

"Smart" and big money tends to move the bond market while retail and "dumb" money have a relatively greater influence over the equity markets. If we are to abide by this rule of thumb, then it would be smart to sell into the dead cat bounce of California Resources Corporation (CRC), which has seen the stock double off of its low since it reported an earnings beat for its Q3 financials.

CRC equity bears and bulls have been pulling the stock up and down with high volatility. Bears are convinced that it will have to restructure as debt is coming due while bulls are speculating that the stock is cheap and CRC will survive. While the company has negative equity, one lever it has used to improve its balance sheet is to buy up its own debt on the open market at a significant discount to par. It must continue to do that with any available cash flow it has if long equity speculators have any hope of seeing a positive outcome.

Looking at the pricing and price changes of the bond market over the past few weeks can provide valuable insight into the likelihood of CRC surviving without restructuring and avoiding a significant battering or complete wipeout of the stock. Just by the trading of the three most liquid bonds, things do not look good. 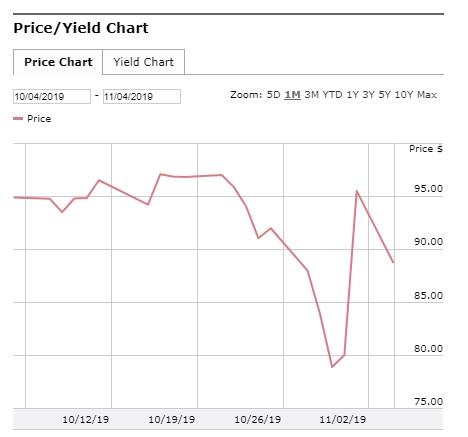 This bond has maturity of just over two months away. The fact that it can't even trade at par value should be a significant red flag to any equity holder. There is enough of a worry that a restructuring event will take place prior to this maturity that these bondholders are not completely convinced that they will be made whole. The $88.75 pricing leads to an annualized yield of over 70%. It has bounced off from a low of just under $80 (a yield of 125%), but it is still trading well below its price from mid to late October when the stock price was hitting new lows of less than $8.00. 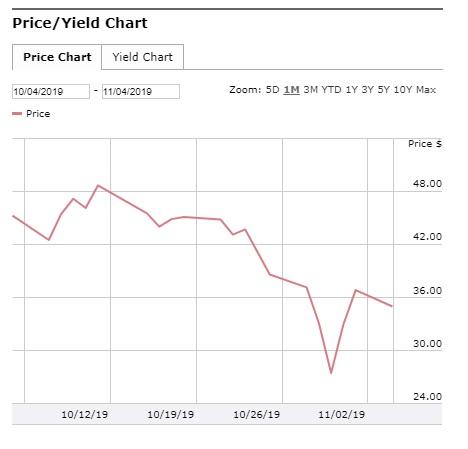 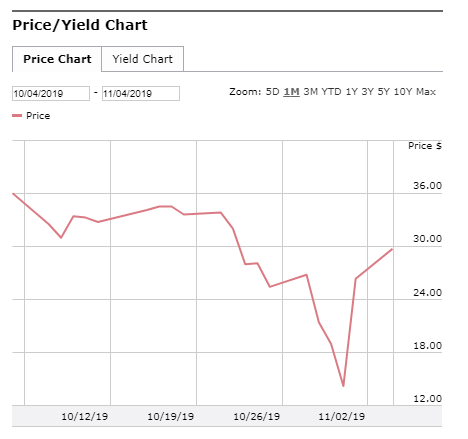 This chart looks like the best of the three, with the bond actually moving up in price on Monday like the stock and unlike the other two series of bonds which have seen a sell off. That would make sense as since it has the longest time to maturity, it trades most similar to equity of the three. It's trading at the biggest discount to par at $28, but because of the long term to expiry it is also trading at the lowest annualized yield of just over 40%. Keeping in mind that a 40% annual yield over five years is seen as the higher risk and return investment over a 70% annualized yield that last only a few months or a year. Even though it has had the best looking bounce of the three series of bonds, this bond is still trading below its price from two weeks ago.

It's clear to me based on the bond trading that fundamentals for CRC appear quite dire. Even with the Q3 earnings beat, bond traders are unwilling to trade these bonds at anything higher than junk status. The 40% to 70% yields show that bond holders do not believe that they will be made whole or must take the risk of holding a new series of common stock. That has me convinced that the current equity is headed for a near or total wipeout in a restructuring event relatively soon. It is a good idea to sell or short into any dead cat bounce.

CRC had a 34% short interest as of October 14. I believe that a mixture of short covering and retail buying and day trading has been the prime factor in the stock moving up. I do not believe this will last. I have purchased a small amount of put options with the expectation that the bounce off of the low will not last and that new lows will be made when fear of bankruptcy once again takes hold.

Edward Vranic, CFA
5.74K Followers
I am a private investor based out of Toronto, Canada and I have been investing since 2003. After 8 years in Corporate Finance with a Canadian Telecom company I have decided to dedicate myself full-time to the capital markets. I write on Seeking Alpha to demonstrate my financial analysis and writing skills across a variety of industries and to take advantage of any story-based trading opportunity that may arise. My passion and greatest depth of knowledge is on Canadian small cap stocks and I consider my blog posts to be some of my best work. I am interested in any freelance opportunities that may arise outside of Seeking Alpha on Canadian or American listed stocks.
Follow

Disclosure: I am/we are short CRC. I wrote this article myself, and it expresses my own opinions. I am not receiving compensation for it (other than from Seeking Alpha). I have no business relationship with any company whose stock is mentioned in this article.

62 Comments
To ensure this doesn’t happen in the future, please enable Javascript and cookies in your browser.
Is this happening to you frequently? Please report it on our feedback forum.
If you have an ad-blocker enabled you may be blocked from proceeding. Please disable your ad-blocker and refresh.