While much of the news and attention have been focused on Alibaba’s latest earnings performance, we would like to turn investor’s attention to Alibaba’s Southeast Asian operations which is led by a well-known e-commerce player, Lazada Group (Lazada). Overall, after listening to the earnings call, we felt that while revenue growth momentum for Lazada continues to thrive in the Southeast Asian region, the lack of disclosures regarding the overall revenue and earnings growth picture is disappointing. However, we continue to maintain an overall bullish stance on Alibaba’s fundamentals.

Origins of Lazada Group and what is its relationship with Alibaba

According to Wikipedia, Lazada Group was founded in 2012 by Rocket Internet, a German incubator that builds companies that adopt the business models of US technology companies in emerging markets.

Fast forward to April 2016, after going through several funding rounds, Alibaba announced its intention to acquire a controlling interest in Lazada by paying US$500 million for new shares and buying US$500 million worth of shares from existing investors. Then, British supermarket company Tesco Plc (OTCPK: TSCDF) increased its investment in Lazada by an additional US$1.0 billion, raising its stake from 51 per cent to 83 per cent. Following that, confirmed the sale of 8.6 per cent of its holding in Lazada for US$129 million.

In June 2017, and March 2018, Alibaba acquired more shares in Lazada, first with a US$1.0 billion investment in June 2017, then by another US$2.0 billion in March 2018. The current CEO of Lazada is now headed by a former McKinsey & Company executive named Pierre Poignant.

How Important Is Southeast Asia Region To Alibaba?

While most investors might not be aware, the entire Southeast Asia’s internet economy is now worth US$100 billion in 2019, and is expected to grow to US$300 billion in gross merchandise value (GMV) terms by 2025. This will surpass earlier projections of US$240 billion. This is according to latest e-Conomy SEA 2019 report by Singapore’s Temasek Holdings, Google (Alphabet Inc.) (Nasdaq: GOOG), and Bain & Company. 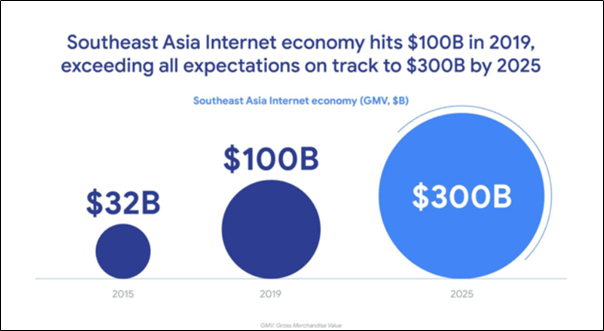 With the two main drivers of growth including e-commerce and ride hailing, fundamental changes in consumer behaviour, and rapid adoption among the young generation are set to power up Southeast Asia’s digital economy going forward.

With such demographic, and technology growth trends happening in the entire digital economy in Southeast Asia, there is no question why Alibaba does not want to make further inroads into the region, through Lazada, or even to increase the adoption rates of mobile financing through its payments company, Ant Financial.

During the latest 2Q FY 2020 earnings call, Alibaba Group’s CEO Daniel Zhang remarked during his opening statements that Lazada showed ‘solid’ operational performance with order growth more than doubling for the fourth consecutive quarter. CEO Zhang than went on to point out that for the Indonesian market, order growth more than tripled, and one of Lazada’s key priorities is to maintain strong user growth and user engagement in the coming year.

However, Alibaba does not provide a separate breakdown of Lazada Group’s overall revenues and earnings figures in its earnings release, but instead, it grouped Lazada’s business segment, together with AliExpress, an Alibaba’s logistics subsidiary under the ‘International Commerce Retail’ segment.

While we are disappointed by the lack of disclosures regarding the breakdown of the international commerce retail segment, we acknowledge that this is quite a common practice and the company does reserve its rights of not disclosing the breakdown.

How is the overall financial health of Lazada?

While there are lack of specific disclosures regarding the breakdown of Lazada’s overall financial performance, we attempted to use the International Commerce Retail business segment to extrapolate the historical financial operation since Alibaba acquired Lazada in 2016. 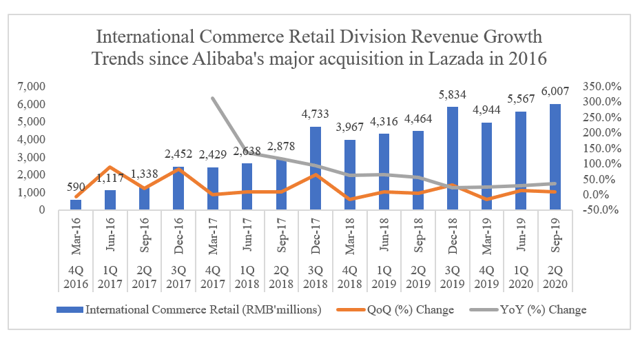 While not specifically singling out Lazada Group’s overall financial performance, the chart below shows that as of 2Q FY 2020, the path to profitability for the International Commerce Retail unit, which is classified as part of the larger core commerce unit, still remains unclear, as combined losses for the core commerce unit in 2Q FY 2020 came in RMB 7.04 billion, compared to combined losses during 2Q FY 2019 of RMB 4.16 billion. 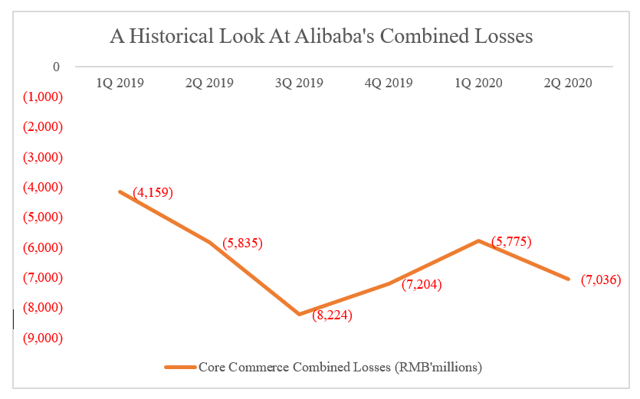 How is Lazada stacking up against its Indonesian peers?

During the 2Q FY 2020 earnings conference call, CEO Daniel Zhang specifically mentioned about Lazada’s performance in Indonesia where he was quoted as saying that ‘order growth more than tripled’. While we have no insights as to the order growth details, we found this chart illustration by iPrice Group, a Southeast Asian digital ratings company based in Malaysia, which showed that Lazada Indonesia continues to lag behind among its larger competitors in terms of monthly web visits as of the third quarter of 2019 (3Q 2019) ending September 30, 2019.

We noted that in the last earnings conference call for Sea Limited during its second quarter ending June 30, 2019 (2Q FY 2019), its co-founder, and CEO, Forrest Li noted during the call that for Indonesia. Shopee recorded 110 million orders for the quarter, which represents a daily average of over 1.2 million orders.

Moreover, iPrice’s 2Q 2019 e-commerce report which was published in August 2019 pointed out that Shopee led its major e-commerce competitors in Southeast Asia in areas such as monthly active users (MAUs), number of total downloads, and websites with the most visits (desktop and mobile web). 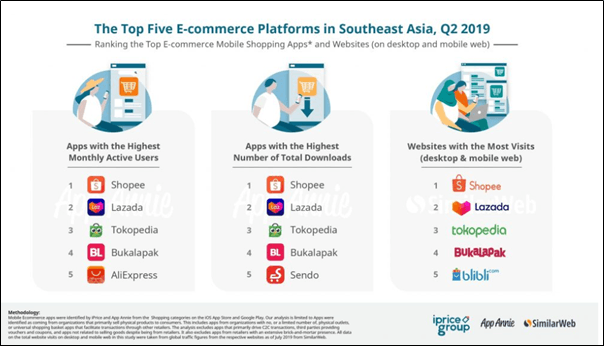 Meanwhile, Sea Limited is poised to report its September 2019 quarter earnings next Tuesday, November 12, 2019, and it will be interesting to see how Shopee compares with Lazada especially after ‘Singles’ Day or ’11-11’ sales event, which is the one of the most prominent global shopping festivals before the traditional ‘Black Friday’, and ‘Cyber Monday’.

The valuation exercise done for Lazada is perhaps one of the most challenging tasks as Alibaba does not separately break down the international commerce retail segment into the two components, Lazada, and the one of its logistics arms, AliExpress.

We decided to conduct our forecasts based on the average estimated revenue growth of 40 per cent per year for financial year 2020 (FY 2020) and 2021 (FY 2021) using the historical revenue figures from the international retail segment, and the table illustration is shown here.

Then, we took the estimated December calendar year end enterprise value – to – revenue (EV/Revenue) multiples projections for 2019 and 2020 of some of the direct and indirect listed peers of Lazada. We do want to let investors be aware that in the Southeast Asia region, there is only one direct listed e-commerce player, which is Shopee by NYSE-listed Sea Limited. Other than that, most of its regional competitors like Tokopedia, and Bukalapak are privately owned companies based in Indonesia.

Following that, we plug these EV/Revenue multiples to our revenue estimates under three segment percentage scenarios (30 per cent, 50 per cent and 70 per cent respectively) for the Lazada component of the international commerce retail segment to determine the forecasted enterprise values for FY 2020 and FY 2021.

A chart illustration of the workings is as follows:

While there are no latest records of potential valuations of Lazada, we noted that Singapore’s Business Times (BT) newspaper reportedly indicated that Lazada’s valuation was at US$3.15 billion as of 2017. Therefore, at the lowest valuation range estimate of US$5.03 billion in FY 2020e, this would be an increase of approximately 59.68 per cent.

We caution investors against reading too much on the potential valuation of Lazada as the business merely constitute about 5.0 per cent of the total revenues through the international commerce retail segment. Moreover, investors might be familiar with a common term used to describe valuation as more than an art than science. Therefore, until Alibaba decides one day that it is planning or expected to publicly list Lazada, we will then know all the details.

How should investors act on the potential listing of Lazada?

For the entire Alibaba Group Holding Limited itself, a poll of 18 analysts conducted by TipRanks.com, the average twelve-month price target on Alibaba’s stock is US$224.81. The high estimate was US$250.00 while the low-end of the estimate is US$200.00. The average analyst rating on the counter is a ‘Strong Buy’.

For investors who might want to get in Alibaba's stock specifically for a potential spin-off or a public listing of Lazada, it might be best to wait for clearer picture from management regarding this move.

Hock Meng Tay
90 Followers
I am Tay Hock Meng, a Singapore-based research analyst providing various analysis of company valuations. I currently hold a Chartered Alternative Investment Analyst (CAIA) charter since 2011. I am looking for research analyst-focused job roles in finance, and alternative investments (AI), namely hedge funds, private equity, real estate and liquid alternatives, among others.I have also thoughts of setting up a research analysis firm focusing on real estate research. I hope to garner more professional experiences in this area to harness my skills before embarking on this long-term objective.
Follow