The recent WarnerMedia event finally gave AT&T executives an opportunity to present to the market the potential for their new direct-to-consumer video streaming service. The launch of Disney+ propelled Disney (DIS) far higher, but AT&T's stock didn't see the same benefit. The market was far more impressed by the capital allocation plans of the wireless and media giant than the limited financial projections of HBO Max.

This article will discuss the financial projections of HBO Max and another article will tackle the more complex 2022 forecasts. 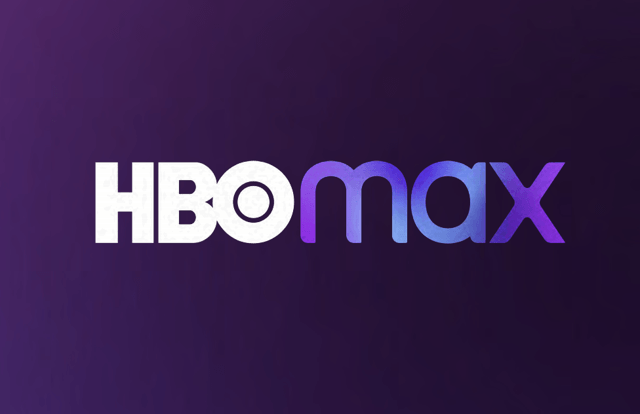 For all of the hype surrounding the video streaming market, AT&T managed the impossible of turning the business into a dud before it even launches. The key details from the WarnerMedia Day last week were a May 2020 launch for HBO Max and the official pricing at $14.99 per month. The amount matches the current pricing of HBO.

The predictable result is that HBO Max will have a negative financial impact on the business in the near term with limited long-term benefits. While WarnerMedia head John Stankey threw out targets for 80 million subscribers in five years, the market didn't fully comprehend that these numbers were inclusive of existing HBO customers. Other video streaming services such as Disney+ and Apple (AAPL) TV+ are forecast to end up with more subscribers while starting from zero.

Investors need to let some of the projections settle in before getting too excited about the potential of their new video streaming service. The company only forecasts minimal revenues boosts in 2020 of $0.1 billion and 2021 of $1.0 billion. The revenue amounts start growing at a solid clip in 2022 and beyond. 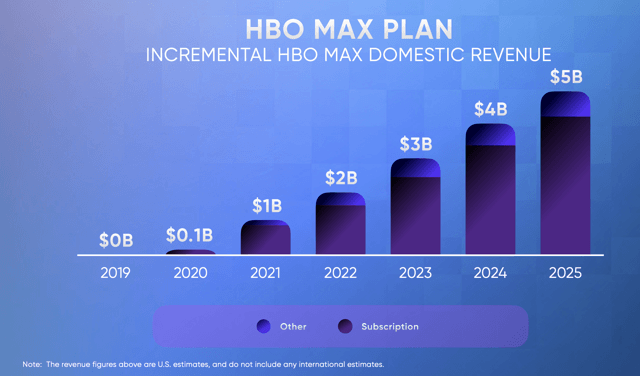 AT&T has a revenue base of over $180 billion, so the benefit of $1 billion in additional revenue only boosts growth by 0.5%. The DTC service isn't the growth option investors were wanting due to the existing subscriber base and the inability of the company to cut prices to attract more users or cross bundle with wireless without giving away the service.

The problem for HBO is that the company already has a 34 million existing domestic HBO subscriber base. AT&T splits fees with existing cable distributors on these subscribers so the revenue potential is to move these customers to the streaming service where AT&T collects all of the $15 per month subscription fee.

Remember that Disney forecasted 60 to 90 million subs with a $70 annual fee. At 60 million subs, Disney will generate $4.2 billion in annual fees plus have the ability to add another 30 million subs along with raising the price. At $15/month, HBO Max has no ability to raise prices until the other DTC services follow suit.

Investors that were excited about the HBO Max opportunity were likely shocked by the potential revenue boost of only $5 billion by 2025. When the company threw out 2025 sub targets of 50 million, the general public thought AT&T was adding an additional 50 million subs versus what amounts to only adding 16 million subs over 5 years or the pace of adding ~3 million subs per year. 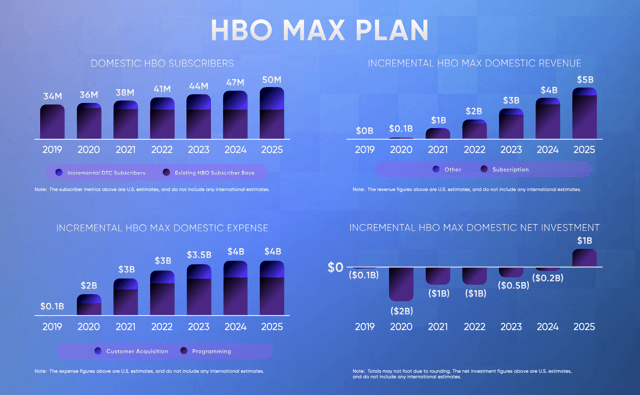 Even more concerning is the projection for adding revenues beyond subscription fees. The 16 million additional subs paying $180 a year ($15/month) would only add ~$2.9 billion in revenues. The company will have to obtain the other ~$2.1 billion in additional revenues from the ad product forecasted to start in 2021 or via additional fees from subs switching away from distribution partners.

Again, AT&T is getting beat to the punch on the ad-supported service. CNBC reported last week that the upcoming NBC (CMCSA) streaming service Peacock was targeting an ad-supported version for all viewers. AT&T constantly fails to innovate.

While AT&T can't be bothered to get the ad-supported service out until 2021, NBC is already looking to join the rest of the services in providing either affordable options or ad-supported versions leaving HBO Max on the outside looking in with the most expensive video streaming service by far. NBC is willing to go the ad-supported route with an expectation of only making 33% of what HBO Max plans to charge at $5.

Assuming HBO Max hits these revenue targets, the company won't become profitable until 2025. Any hiccup with adding subs or the ancillary fees such as the ad product and the service could easily struggle to add enough revenues to cover the $4 billion in additional costs in both 2024 and 2025.

One only has to look at this list of competitive video streaming services to see how AT&T isn't going to succeed. The company itself just forecasted limited growth and the competition continues to pile on as the company with one of the largest content libraries can't be bothered to reach the market in a reasonable time.

Basically, AT&T has decided to preserve profits and cash flows in the short term versus squashing the competition via superior content and lower prices. The end result will be HBO Max with a very uncompetitive product in a few years with mostly an old content library and competitors dominating the market with suddenly larger budgets.

Analysts have recently raised 2021 revenue targets, but the addition of HBO Max isn't altering the trend of flat to down revenues for years. After a week of absorbing the HBO Max projections, the revenue target for the next couple of years is stuck at $182 billion.

The key investor takeaway is that the lack of material revenue growth from HBO Max has huge ramifications for whether AT&T achieves the 1% to 2% CAGR targeted growth through 2022. The stock is up at $39 due to general excitement over the financial projections for 2022, but the numbers don't work based on the review of the HBO Max projections.

My next article will incorporate the capital allocation and margin expansion plans to derive the likelihood of AT&T meeting their 2022 projections.

Stone Fox Capital
37.92K Followers
Author of Out Fox The Street
Out Fox the market with misunderstood, high reward opportunities
Stone Fox Capital Advisors, LLC is a registered investment advisor founded in 2010. Mark Holder graduated from the University of Tulsa with a double major in accounting & finance. Mark has his Series 65 and is also a CPA.

Disclosure: I am/we are long T, AAPL. I wrote this article myself, and it expresses my own opinions. I am not receiving compensation for it (other than from Seeking Alpha). I have no business relationship with any company whose stock is mentioned in this article.

61 Comments
To ensure this doesn’t happen in the future, please enable Javascript and cookies in your browser.
Is this happening to you frequently? Please report it on our feedback forum.
If you have an ad-blocker enabled you may be blocked from proceeding. Please disable your ad-blocker and refresh.