LyondellBasell's (NYSE:LYB) recent development showcases why buying undervalued companies during downtimes is an excellent idea. My last article on the company was "LyondellBasell's Valuation Says Buy" - and the valuation really did say "BUY". In fact, if you bought, there's a good chance that right now, you're pretty happy - just like me.

Let me show you why. 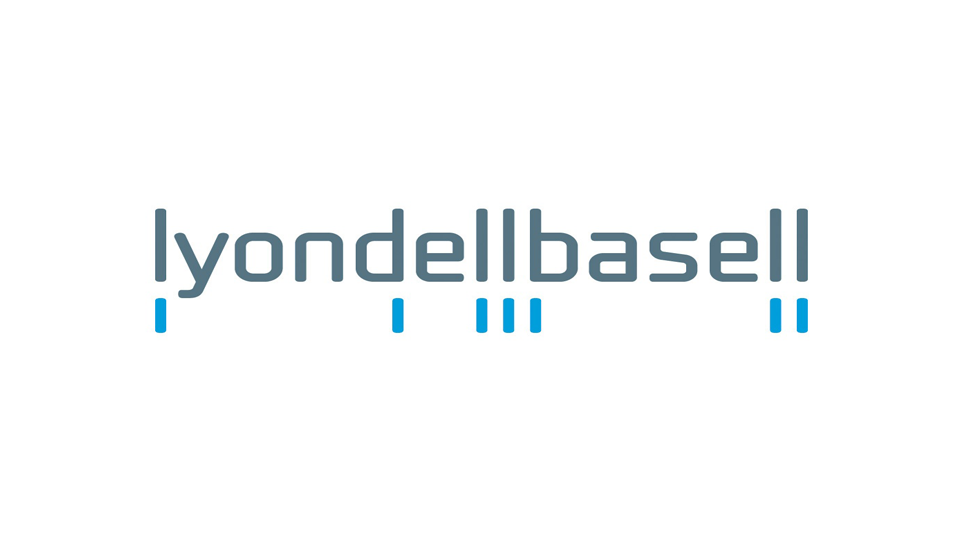 Now, the obvious reason for investor happiness at this time is the continued share price development. 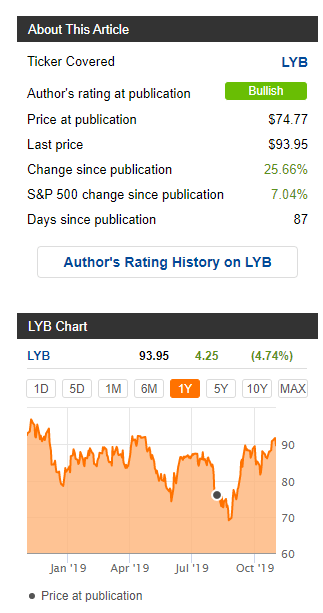 Returns in as little as a few months have been downright ridiculous if purchased at such valuation. Some people say conservative value investors can't provide meaningful short-term gain. I myself invested a sizable chunk of change - almost 2000$ - at the time to my already-existing position, and my holding is currently looking splendid (almost at a full percentage of exposure), both as a dividend holding long term, yielding almost 5%, but also as a short-term trade, if I was liable to do such things.

Just to be clear, I didn't expect the company to recover as quickly as this, nor do I claim that my articles/personal pieces of opinion will result in this. It also isn't a goal that they do.

It is, however, very pleasant when they do.

As to the quarterly results, despite missing targets, it does seem that a combination of market exuberance and company results is causing the market to view this quarter as a positive. There are a few reasons for this.

Despite missing targets, company performance remains at a positive, showing steady increases in earnings over time. The company remains a very efficient operator, showing a 13.2% Operating FCF yield, and the impressive amounts of cash from operating activities are being used in excellent ways.

Company cash is currently being used for paying down company debt, recurring company CapEx (as well as new initiatives) as well as a significant amount of both dividends and share repurchases, many done during 3Q19. LyondellBasell has bought back 35.1M shares, and the company, while not showing significant degrees of organic growth at this time, is growing inorganically.

Speaking of company debt, the maturities here are extremely balanced, with maturities ranging up to 2055, starting 2021 at the earliest. LYB has refinanced a considerable amount - $2B - worth of debt, reducing the average interest rate down to 4.25%. There are European companies such as Castellum (OTCPK:CWQXF) that have far lower rates than this - but that's a different continent as well as a different sector. On a peer comparison, such an average interest rate is excellent. 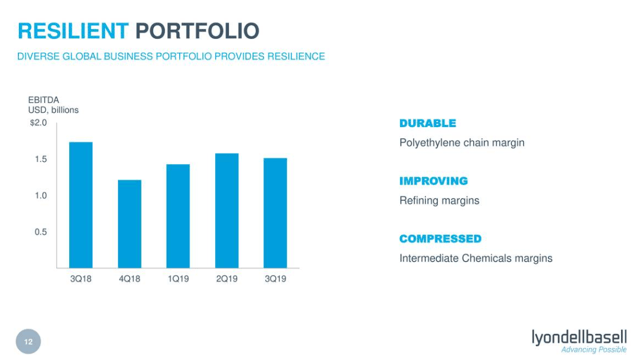 Again, EBITDA on a comparison to 3Q18 is down somewhat, but the overall trend can most certainly be characterized as "stable", which is really what we want - or at least, what I want.

The Olefin & Polyolefin segment improved EBITDA due to better volumes and better margins, despite maintenance during 3Q19. Once again, lower than 3Q18 - but on par with previous quarters in 2019, or better. As far as the Non-American segment on the same product went, it actually improved compared to 3Q18 but showed lower volumes on a quarterly comparison.

Intermediates & Derivatives gave us worse results, unfortunately, both on a quarterly and on a YoY comparison, offset by oversupply on the market as well as margin declines (also related thereto). Certain sub-segments showed margin improvements, but overall, the results were impacted heavily by lower margins in the businesses.

Advanced Polymer Solutions actually came in better than I expected, given the massive exposure to automotive. Headwinds here were mainly volume, but the segment performed well in terms of margins. There was also a charge ($43M) related to integration costs.

Refining has operated at a negative profit since 4Q18, when the segment turned dismal at a -$84M EBITDA. While this has improved since, at a -$6M EBITDA for the quarter, the company reports a lower overall price for the sulfur-heavy sour crude oil found on the open market by the Gulf Coast.

Finally, the Technology segment performed well, but down from a strong 2Q19. Margins and volumes remained stable, however.

While there are a few individual items to speak of, the overall tendencies as to company operations are promising. EBITDA is stable. Cash continues to flow in. The company has a very conservative P/O ratio and continues to invest in share buybacks - though I'd argue it would soon become too expensive to do this.

Fourth quarters tend to be weaker for companies such as LyondellBasell. As such, I too expect a weaker/softer quarterly result for the next quarter, which may impact stock prices to a point where the company can once again become a compelling "buy".

However, the company does expect its M&As and new operations, including the Hyperzone PE technology, which promises more chemical resistance, will have far more toughness and more processability. This may turn out to be a great growth opportunity and competitive edge going forward - all companies want to produce more/better with less, which is exactly what the new HDPE seems to offer.

As I've indicated, I no longer consider this company a "BUY".

Since my last article, LYB has improved materially - but it doesn't change the fact that it's a cyclical chemical company going into a difficult macro situation. 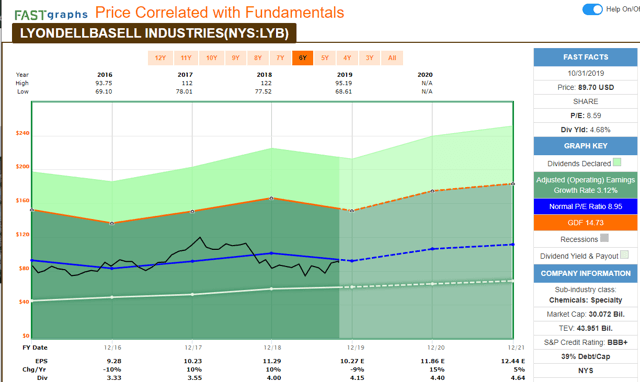 The market assigns LYB, due to the fact that it did go bankrupt, a market discount of an average of roughly 9 times earnings over the long run. As a result of these months rush back up, the company now trades higher than the excellent value proposition months ago. I consider the market discount - wherever applicable - to be relevant, but never a market premium. This is because I try to err on the side of caution and be an exceedingly conservative investor, at least in certain respects. 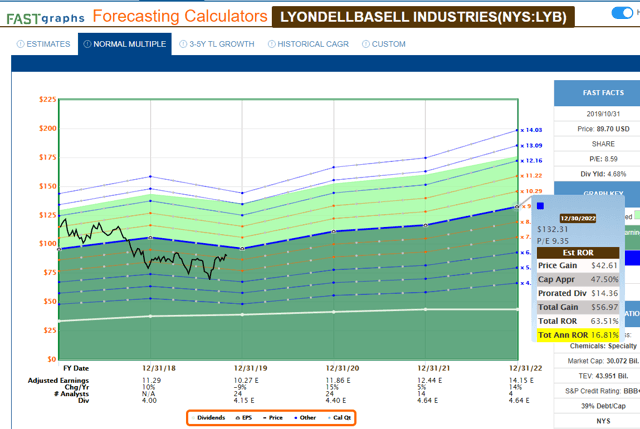 Now, the company's generous dividend, as well as its expected growth, does mean that even at nearly fair-discount value, prospects are still for market-beating returns if these predictions turn out to be accurate.

LYB also has the distinct advantage of consistently - 75% of the time - outperforming FactSet analyst expectations. The company has a lot going for it, despite improved share prices.

However, it's still a cyclical going into difficult macro and testing historical highs in terms of numerical share prices. This means that I personally tend towards becoming more careful.

When I look at a company, I like to see:

This is of course extremely rare to find - but a few months back, LYB was just that. The company's status has weakened both in terms of the first and second points, and the third is definitely weaker as a result of the now-improved share price.

This brings me to my updated thesis for this excellent chemical giant.

To call LyondellBasell overvalued would be wrong, as I see it.

To call LyondellBasell a "bad buy" would, of course, also be wrong.

However - what I will say is that LyondellBasell is now testing historical fair valuations in a climate where the company's earnings may be negatively affected going forward - especially in a historically/seasonally weak fourth quarter.

Changing a stance - going from "Bullish" to "Neutral" or the other way around, is always a change that must be backed up by a strong and clear background. I believe that strong annualized gains in less than 3 months as well as a valuation going towards historical highs, now going into a historically weak season, warrants this in this case.

I will not add more shares of LyondellBasell at this time. I want a larger discount in order to do this, especially given the FX I'm exposed to in my position as a European investor.

I don't believe you should buy LYB at this valuation at this time. If you didn't buy when the company was down in the doldrums, I'd say you missed this opportunity - and current valuation presents a more risky opportunity, at best. In this case, I'd wait for the next downturn and buy it there.

Due to impressive short-term gains, I now consider LyondellBasell a "HOLD". It is no longer as undervalued as I'd want it to buy more shares, and I believe you can wait for the company to become volatile again prior to buying more.

36 year old DGI investor/senior analyst in private portfolio management for a select number of clients in Sweden. Invests in USA, Canada, Germany, Scandinavia, France, UK, BeNeLux. My aim is to only buy undervalued/fairly valued stocks and to be an authority on value investments as well as related topics.

Disclosure: I am/we are long LYB, CWQXF. I wrote this article myself, and it expresses my own opinions. I am not receiving compensation for it (other than from Seeking Alpha). I have no business relationship with any company whose stock is mentioned in this article.

Additional disclosure: While this article may sound like financial advice, please observe that the author is not a CFA or in any way licensed to give financial advice. It may be structured as such, but it is not financial advice. Investors are required and expected to do their own due diligence and research prior to any investment.