Yield curves are no longer inverted, and that's good news for investors.

Investors should now focus more on growth than on safety.

After inverting earlier this summer, several widely watched yield curves have normalized as trade war fears continue to fade. As investors begin to warm up to risk assets like equities, improving yield curve slopes point to a stronger economic outlook. In this report we'll discuss the bullish message the bond market is sending for both the U.S. economy and the stock market.

Bond yields have been bottoming since hitting a major low this summer, and the prognosis is good for gradually rising yields in the coming months. Normally, rising yields would be greeted with trepidation by equity investors, but this is one of those rare times where higher yields are most welcome. U.S. sovereign bond yields collapsed for much of 2019 based on the flight to safety move among investors who were concerned about an all-out trade war between the U.S. and China. It was widely believed that the trade dispute between the two nations would result in a global economic recession.

Adding to the recession fears was an inversion in several widely followed Treasury yield curves. One of the first yield curves to ring the alarm for recession watchers was the 10-year/3-month yield curve. When the 10-year Treasury minus the 3-month Treasury went decisively negative back in May, it caused something akin to a panic among economists and Fed watchers. Many observers believed this portended a recession since this yield spread had plummeted to depths not seen since the last recession.

Another widely monitored yield spread was the 10-year/2-year curve, shown below. Both yield curves were at their lowest points when investor panic over a possible recession and bear market in equities was at fever pitch. The low point for both yield curves occurred in August, which was precisely when the 10-year Treasury yield bottomed and began to recover.

Since the August low in bond yields, fears over the state of both the domestic and the global economy have waned. Indeed, investors are beginning to embrace more of a "risk on" approach by favoring equities over the relative safety of Treasury bonds. Even corporate bonds have been liquidated to some extent as investors look to increase their exposure to stocks now that China and the U.S. are making progress toward ending the trade war.

The improvements in both of the above yield curves suggests that recession risks have been greatly reduced, and that investors are no longer as concerned with safety as they are with growth. This is good news for the intermediate-term (3-6 month) equity market outlook and will allow investors to take advantage of forward earnings and revenue growth for U.S. companies instead of looking merely to preserve capital. Participants, in other words, are shedding their bunker mentality.

Probably the most important yield curve for investors is the one based on the Fed funds rate. The following graph shows the difference between the 10-year Treasury yield and the Fed funds rate as a continuous line graph. Historically, whenever this indicator has exceeded the 1.00 level it has reflected an increased risk for a slowing economy and a bear market in stocks. The longer this indicator remains above 1.00, the greater the risks it presents for the investor. But after spending a couple of months this summer above 1.00, this indicator has since fallen back to a healthier level of 0.84 as of Nov. 5. 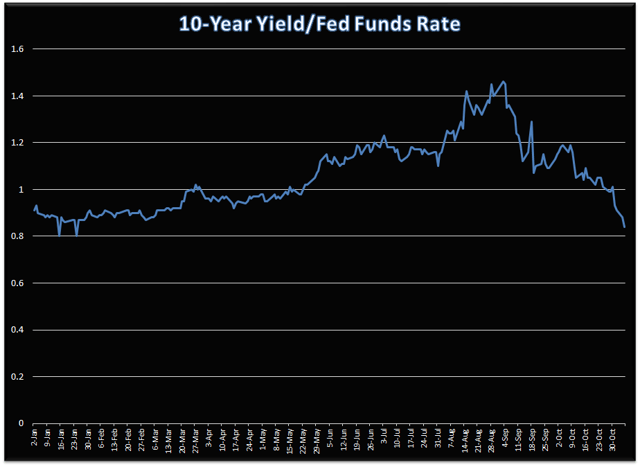 The reason, of course, for this improvement is that the U.S. 10-year Treasury yield is rising while the Fed funds rate has fallen. This is an ideal configuration, for whenever Treasury bond yields are below the Fed's benchmark interest rate it has historically favored owning equities. It's also good for the economy since it reflects a looser monetary policy on the part of the Fed. The lower this indicator falls, the more bullish it will be for the stock market and the economic outlook in the coming months. As it now stands, the trend reflected here is as promising as it has been since earlier in 2018.

With yield curves no longer inverted, the global economy suddenly looks less fearful than it did previously this summer. With the yield curves mentioned here now in the process of steepening, now would be a good time for participants to step away from the sidelines and take a good look at the many bargains still available in the stock market. In particular, safety-oriented sectors like utilities and real estate equities are likely to underperform the growth-oriented sectors, including consumer discretionary and tech stocks in general.

Investors should also expect that risk aversion will continue to decline in the coming weeks in view of the significant improvement in the global trade outlook, as well as the Fed's recent commitment to a looser monetary policy. The diminution of trade war fears is also likely to result in higher equity prices and lower Treasury bond prices. Higher bond yields can also be expected as the U.S. government debt market gradually returns to a more normal state now that safe-haven demand has diminished. Investors should respond accordingly by increasing exposure to stocks on an intermediate-term (3-6 month) basis while diminishing exposure to government bonds.

Disclosure: I am/we are long SPHQ. I wrote this article myself, and it expresses my own opinions. I am not receiving compensation for it (other than from Seeking Alpha). I have no business relationship with any company whose stock is mentioned in this article.