In the past 10 years, whenever such deviation has occurred, sooner or later small-caps have converged back, providing huge returns. In addition, hawkish FED and lower borrowing costs bode well.

APTS, GMRE and SELF are all small-cap REITs that trade at significant discount to its peers and offer huge potential for an upside due to the embedded small-cap premium as.

In my previous article I made the case that currently small-cap REITs offer historically high discount relative to large-cap REITs. The current discount is the steepest in the past 10-year period. While both the small-cap and large-cap REITs have correlated strongly there have been some periods when deviation have occurred. However, in that case sooner or later convergence has taken place bringing small-caps either down or up depending where they trade at relative to large-caps. In short, the main arguments supporting the thesis of small-cap REITs closing the 63% P/FFO multiple gap from the large-caps are the following:

In my opinion, to profit from this thesis Preferred Apartment Communities (APTS), Global Medical REIT (GMRE) and Global Self Storage (SELF) are highly attractive small-cap REIT picks, which offer an upside from the small-cap convergence and in the same time provide notable and secure dividends.

Preferred Apartment Communities (APTS) is a REIT formed primarily to acquire and operate multifamily properties in select targeted markets throughout the United States. As a secondary strategy, APTS may make real estate loan investments in multifamily communities and other multifamily related assets, such as off-campus student housing communities. APTS may also invest a lesser portion of our assets in other income-producing property types, such as grocery-anchored shopping centers and office properties.

Usually, when a REIT is yielding above 5%, the current growth and its outlook are quite minuscular. However, APTS shows the opposite. For the quarter ended June 30, 2019, APTS rental revenue increased approximately 3.4% and the operating expenses increased 1.5%, resulting in an increase in net operating income of approximately 3.9% as compared to the quarter ended June 30, 2018. The occupancy rate experienced a small hike reaching strong 95.6%. The NOI continued its strong trend and marked a 7th straight increase for the APTS rental income. Moreover, the mid range for APTS's FFO per share growth estimates for 2019 is 5%. And according to Nareit, FFO growth is projected to advance reaching 6.3% in 2020.

The fact that APTS keeps increasing its FFO mitigates the risk of being forced to cut its 7.3% dividend, especially considering that the FFO payout stands at very acceptable level of 66%.

The debt burden is rather high for APTS and the corresponding interest payment coverage with EBITDA is above the sector average. However, the Company has done an outstanding job in creating a conservative or prudent loan maturity schedule. As you can see in the picture below, majority of the loans fall due in 2028 and beyond. In 2019-2020, the loan amount to be refinanced is insignificant as well.

The current level of 78% debt ratio and above-average interest coverage ratio limit the APTS's future growth potential. Investors should not expect a major capital appreciation, which could be driven by intense acquisitions. However, the aforementioned loan maturity schedule indicates that in case of a recession, the Company should be able to refinance its loans without doing extra share offerings or liquidating its properties at considerable discounts.

There are 7 separate segments to which the allocation is shifted:

While there are some risky allocations that resemble mREIT business, the substance of these assets and the broad allocation make the entire Company much safer.

When investing in REITs, you will look at how diversified the Company's portfolio is usually within a single sector. However, APTS hits two rabbits with one shot. The portfolio allocation to 7 separate asset classes allows investors to suffer smaller drawdowns in case one particular segment in the portfolio goes out of favour. And, secondly, the intra-segment allocation is very diversified as well - as illustrated in the picture below. 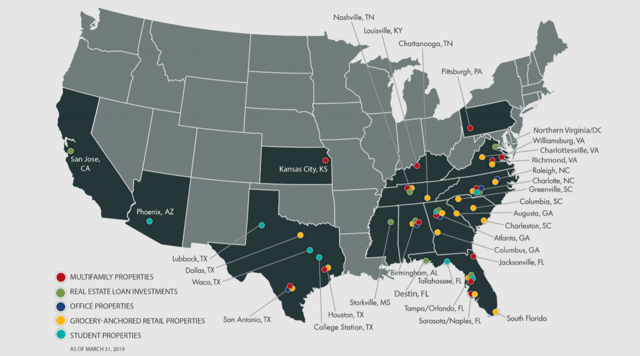 APTS trades at a significant discount relative to its residential REIT peers. Currently it trades at P/FFO multiple of 9.9x, based on the TTM FFOs, while the sector average for residential REITs is 28.3x. This implies a 285% discount. Expecting a full convergence to the average level would be unwise, but getting some capital appreciation gain by holding APTS is a reasonable assumption. APTS provides a great opportunity to capitalize on the small-cap discount in the same time providing secure 7.3% dividend yield.

GMRE is highly exposed to net lease contracts, meaning that the three triplets (property tax, building insurance and maintenance) place the burden on the tenants and allow the Company to receive less volatile cash flows. Since these leases are generally signed for long periods, and have embedded rent increases, GMRE does not have to worry as much about lease renewals or negotiating rent adjustments often. This is a truly great characteristic in light of looming recession risks.

Since January 1, 2019, GMRE has completed 10 acquisitions, encompassing 415,419 leasable square feet at a weighted average cap rate of 7.4%. The amplitude of the cap-rates for newly acquired properties ranges from 6.7% to 9.1%. Compared to the largest sector peers such as Welltower (WELL) and Ventas (VTR), GMRE's cap rates look impressive. The average yield from the properties acquired by WELL and VTR during the year is 5.4% and 5.5% respectively.

Moreover, GMRE has created an acquisition pipeline with an even higher weighted average cap rate.

The lowered cost of financing coupled with the above-average yielding investments puts GMRE in a good spot for capturing strong long-term returns.

All 91 buildings were fully occupied as of June 30, 2019, showing that the management has been strategic on buying a high-demand locations. The weighted average lease term is at remarkably high level of 9.3 years, where the embedded weighted average rent escalation is set at 2.2% per annum. The rent coverage ratio for tenants is 4.97x. This is significantly above the sector average of 3.5x . For instance, the largest health care REIT Welltower Inc. has rent coverage ratio of only 1.3x. Furthermore, GMRE has not backed from its triple-lease strategy as majority of the newly acquired properties were stipulated on such leases.

As the probability of near-term recession increase, the structure and ability for tenants to cover the leases play an even huger roll. The portfolio characteristics allow the Company to have a robust defence mechanism in place in case some crisis hits. In other words, it can maintain its aggressive acquisition stance without having to worry about reducing the dividend or issuing additional shares when GDP numbers turn negative.

According to Nareit the average P/FFO estimate 2019 for health care REITs is 16.91, while the P/FFO ratio for GMRE is projected at 13.49. This implies a ~25% discount. Considering the aforementioned facts an assumption of GMRE converging closer to the average sector level seems justified. In addition, while you wait for the thesis to play out, you will get compensated by a hefty 7% dividend yield. 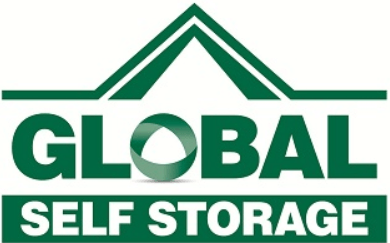 Global Self Storage (SELF), which is actually a micro-cap REIT due to its super tiny market cap, is a self-administered and self-managed REIT focused on the ownership, operation, acquisition, development and redevelopment of self storage facilities in the United States. SELF`s self storage facilities are designed to offer affordable, easily accessible and secure storage space for residential and commercial customers. The Company currently owns and operates, through its wholly owned subsidiaries, eleven self storage properties located in Connecticut, Illinois, Indiana, New York, Ohio, Pennsylvania, and South Carolina.

Small but diversified portfolio which is set to expand even further

SELF owns 766 thousand SF leasable area that is divided among 11 individual facilities, which in total comprise 5613 units of storage.

The SELF`s portfolio is split among storage types as well, where the exposure to the traditional indoor storage is brought down via 33% allocation towards climate controlled storage and 8% allocation to outdoor type of storage. The key benefit of diversifying away from the traditional indoor storage allows SELF not only to reduce the concentration risk (typical for small-cap REITs), but also to obtain higher margins. The quote below from Q2, 2019 results explains this well:

The graph below compares how SELF has performed compared to other self-storage sector peers during Q2, 2019.

SELF is beats all the peers when it comes to revenue growth, occupancy rates and the provided dividend yield. The only lagging factor is NOI growth, which has not yet catched up with the strong top line growth. However, there are two reasons, which makes the lagging NOI growth not a huge fact to worry about: (1) in year 2018, its NOI growth was above 11%, which set historically high comparison figure for this year (2) same-store expense increased by ~12% mainly due to higher property taxes stemming from an ambiguous tax base assessment – the management has appealed this outcome and expects a reversal. Furthermore, on a half year basis, the NOI growth has gradually started to catch up landing at 4.5% - this figure ranks second among SELF`s closest peers.

Historically, SELF has grown the underlying AFFOs quite significantly, but the recent two quarters indicate that this trend, perhaps, has come to an end. However, I would argue that such conclusion lacks a justified basis as the items impacting the lowered AFFOs are more or less considered as one-offs. One aspect contributing to this drop is the already mentioned property tax expense, which has increased by ~ 15%. The other one-off depressing the quarterly AFFO results is the business development costs associated with new store acquisitions and the introduction of new revenue systems, which, according to management, are expected to stimulate the revenue growth even further. These costs have increased by ~ 12%.

Now, one has to understand that for such a small REIT as SELF each step taken for growing the Company leaves an immediate and notable cost impact. Yet, such steps should be received positively as this will ultimately reward long-term investors by larger and more diverse cash flows going forward. Moreover, as the Company becomes larger, the small cap risk premium will gradually start to vanish and thus push the valuations up to the peer level.

These one-off items have lead to an elevated AFFO payout - slightly above 100%. On the surface this seems a risky thing, but taking into account that the Q2, 2019 already resulted in a positive AFFO growth, and that 16.5 thousand SF climate-controlled units will start generating cash flows at the beginning of 2020, the payout ratio is set to decline. Plus, SELF has a rather conservative leverage structure - debt to asset ratio of 39%, which coupled with the access to $ 10 million liquidity (~28% of SELF`s market cap) provide great opportunities for making profitable acquisitions.

Currently SELF trades at a P/FFO multiple of 18x, which implies a 20% discount to self-storage REIT peers. While SELF should never trade at a premium relative to the sector average (because it is a micro-cap), one could expect share price gains once the Company proves that it can get the AFFOs back to the previous level. The probability of SELF delivering strong AFFO growth is high as there are already clear signals indicating that the recovery has started. Again, SELF would offer above sector average dividend yield of 5.5%, while waiting for the investment case to play out.

If you liked this report, please scroll up and click "Follow" next to my name to not miss future articles.

Follow Roberts Berzins and get email alerts
+
Add a comment
Disagree with this article? Submit your own.
To report a factual error in this article, click here.
Your feedback matters to us!