I have covered Top Ships (NASDAQ:NASDAQ:TOPS) previously, so investors should view this as an update to my earlier articles on the company.

Shares of small, Greece-based tanker operator Top Ships cratered on Thursday after another ugly financing transaction turned out to be highly dilutive to existing common shareholders.

In fact, it took the company just two months to access the capital markets again after already having diluted existing common shareholders by approximately 63% in early September.

After Thursday's sell-off, the stock is down 85% over the past two months alone and 93% since the beginning of the year.

As already suspected in my previous article, the company continues to relentlessly dilute shareholders in order to grow its modern tanker fleet, currently consisting of twelve product and two crude tankers.

From a company perspective, the proven pattern of dilution and reverse stock splits has been quite successful as it enabled Top Ships to double its fleet over the past 30 months including the recent return to the crude tanker market. 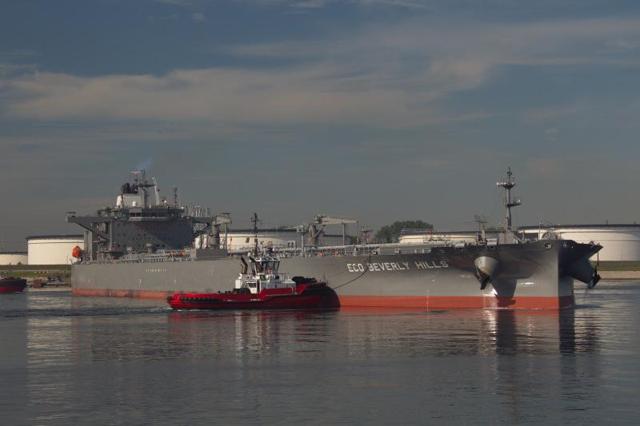 After the most recent reverse stock split, share count was reduced to approximately 1.6 million but two consecutive secondary offerings have more than quintrupled the number of shares to 8.7 million.

Even worse, similar to the September offering, Thursday's capital raise also contained an ugly price-protection mechanism built into the attached Class A warrants in form of a so-called "cashless exercise" feature which will almost certainly result in the issuance of an additional 1.7 million shares (emphasis added by author):

Each Class A warrant is immediately exercisable for one common share at an exercise price of $2.00 per share and will expire eight months from issuance. The Class A warrants also provide that if during the period of time between the date that is the earlier of (I) 30 days from the closing date and (II) the trading day on which a total of more than 12.6 million common shares have traded since the closing date of this offering and if the volume weighted-average price of the common shares immediately prior to the exercise date is lower than $3.20 per share, each warrant may be exercised, at the option of the holder, on a cashless basis for 0.4 of a common share.

The cashless exercise feature actually decreases the stated offering price of $2.00 by almost 30% to approximately $1.43: 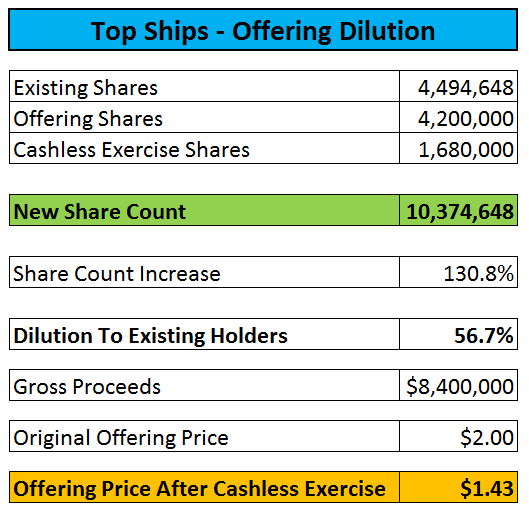 In addition, the company issued 4.2 million Class B warrants to the buyers which are exercisable at any time over the next 18 months at a price of $2.00 per share, effectively putting a lid on any potential recovery rally going forward.

Unfortunately, the recent offering is not the only thing to worry about for Top Ships' common equityholders as the company's controlling shareholder, Evangelos Pistiolis, still owns a large amount of the company's toxic, 15% Series E Convertible Preferred Stock which can be converted into common shares at "80% of the lowest daily VWAP of the Company’s common shares over the twenty consecutive trading days expiring on the trading day immediately prior to the date of delivery of a conversion notice" as stated in the offering prospectus (page S-14).

Based on Thursday's closing price of $1.23 and adjusted for some recent cash redemptions by the company (at a redemption premium of 15%), the controlling shareholder would receive approximately 18 million common shares in exchange for his Series E Preferred Shares, resulting in a 63.5% stake in Top Ships.

While at some point going forward, Pistiolis might decide to act in a similar manner as his obvious role model George Economou, I could easily envision Top Ships' shares to have lost another 99.9% by that time.

Stay away from Top Ships as, by all likelihood, Evangelos Pistiolis will continue the proven pattern of dilution and reverse splits to his personal benefit for the time being.

Unlike common equityholders, he remains entirely protected from further share price decreases and at all time has the chance to convert his Series E Preferred Convertible Stock into a majority stake of the company's common shares at an at least 20% discount to the then prevailing market price.

Given the company's history, a short sale looks enticing, but shares are hard to borrow and the company's stock has occasionally been subject to short-lived but nevertheless violent momentum rallies in the past so I strongly suggest waiting for a better entry point and keeping your position sizes in check.

Henrik Alex
13.53K Followers
I am mostly a trader engaging in both long and short bets intraday and occasionally over the short- to medium term. My historical focus has been mostly on tech stocks but over the past couple of years I have also started broad coverage of the offshore drilling and supply industry as well as the shipping industry in general (tankers, containers, drybulk). In addition, I am having a close eye on the still nascent fuel cell industry.I am located in Germany and have worked quite some time as an auditor for PricewaterhouseCoopers before becoming a daytrader almost 20 years ago. During this time, I managed to successfully maneuver the burst of the dotcom bubble and the aftermath of the world trade center attacks as well as the subprime crisis.Despite not being a native speaker, I always try to deliver high quality research at no charge to followers and the entire Seeking Alpha community.
Follow