The markets are at all-time highs again. A fresh volley of positive trade news, lowered interest rates, and strong consumer spending has investors less concerned about a near-term recession. Obviously, this makes bargain-hunting a bit more difficult, and value-conscious investors have to be more tactful about which stocks to buy.

In my view, Talend (NASDAQ:TLND) is one of the best value plays available in the software sector at the moment. Shares are down about 10% in the year-to-date, and all for the wrong reason in my opinion. Though investors have balked at the company's slowing revenue growth, they've also failed to appreciate the fact that Talend is just now bringing up its cloud division and transitioning its customers to longer-term contracts. As we've abundantly seen with other SaaS names that have embarked on the same transition (like Adobe (ADBE)), the short-term revenue hit from a cloud transition eventually gives way to a stabler and more profitable revenue base.

With this in mind, it's a fantastic opportunity for investors to re-assess the bullish case in this stock. Valuation remains the key driver here. At present share prices around $35, Talend trades at a market cap of $1.07 billion. After netting out the $172 million of cash and $127 million of debt on the company's latest balance sheet, we're left with an enterprise value of $1.03 billion.

This means that Talend is trading at just 3.5x EV/FY20 revenues.

A point I made last quarter, which continues to be even more true this quarter as Talend shares have continued to crumble, is that Talend is essentially trading on par with stocks like Dropbox (DBX) and Box (BOX) - both dogs of the software industry that are tearing each other apart with competition. Talend, meanwhile, exhibits similar low-20s revenue growth rates while having a far more differentiated product in the market.

I continue to believe in a $49 price target on Talend, implying a ~5x EV/FY20 revenue multiple (still well below most peers in the SaaS sector) and 40% upside from current levels. Once investors' attention turns to strong results in Talend's cloud division, sentiment for the stock should improve.

The one key driver that investors new to Talend should be aware about is that the company recently decided to shift its focus to cloud bookings. Though SaaS has caught on with most of the software industry, it's not as common in the infrastructure/backend software space - prime competitor Alteryx (AYX), for example, is still primarily selling extremely high-priced on-prem licenses.

This shift to cloud is the primary headwind to Talend's revenues, because large license deals that would have given a strong kick to current-quarter revenues are now being spread across longer intervals of time. So when we look at Talend's results, we have to look at it in the context of the revenue shifting to cloud.

Here's a look at the company's third-quarter results: 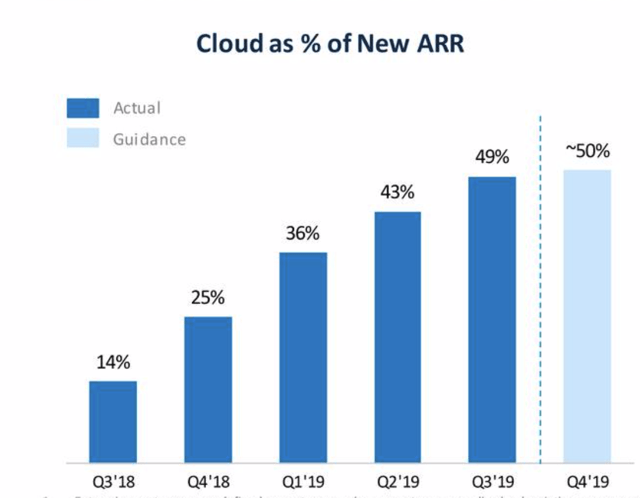 The company has also continued to grow ARR at a mid-20s pace. It's important to note that Talend's current ARR of $225 million covers about 75% of Wall Street's consensus revenue projection for next year - giving us high confidence in Talend's ability to execute to that target. 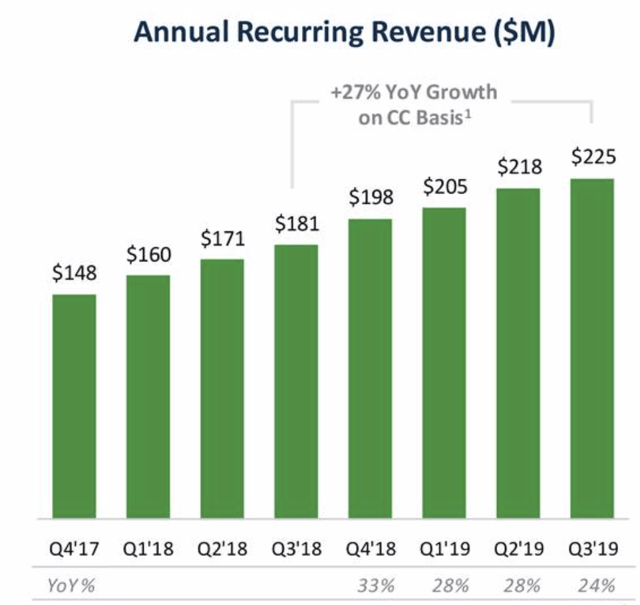 In addition, management noted that there are now 74 customers with total cloud ARR in excess of $100,000 - more than triple the number of large customers from the year-ago quarter, indicating that Talend is also getting its enterprise customers on board with its SaaS offering. Another key development in the cloud business is that Talend is now available on Microsoft Azure (MSFT), widening the company's sales net.

The momentum we're seeing in our cloud business makes us incredibly excited about the opportunity ahead. Our excitement is further bolstered by the fact that our win rates remain consistent even as our cloud business scales exponentially.

Several secular trends continue to drive market growth in cloud adoption; The explosion of global data volumes, a broad transition to public and hybrid cloud environments and increase in data privacy regulation and rapid technological innovation and evolution. With these trends come significantly greater integration and integrity complexity and the need for a modern and complete integration solution.

Talend is at the forefront of the market with Talend Data Fabric, our unified environment that shortens the time to trust the data and solve some of the most complex aspects of the data value chain. In Q3, we announced the availability of Talend Cloud on Microsoft Azure with advance integration and data quality capabilities optimized for the Microsoft cloud platform with native support for Azure services."

It's also important to note that Talend is heading the right direction on the profitability front as well. This quarter, Talend pared down its pro forma operating losses to -$2.8 million, representing a non-GAAP operating margin of -4.4%. In a market that has recently started caring much more about SaaS companies' profitability, that's a highly positive indicator. This also marks a 130bps improvement over 3Q18's pro forma operating margin of -5.7%.

Right now, Talend's performance is muddied due to the impacts of a rapid cloud transition and the leaping mix of recurring-revenue bookings versus the large, one-time deals of the past. This optical deceleration is obscuring the fact that Talend is signing on key partnerships (Azure), moving some of its largest enterprise customers into the cloud, and improving its long-term revenue stability and visibility.

With a stock trading at just over 3.5x forward revenues, the risk-reward profile in Talend is heavily toward bulls. This is as good a time to buy as any.

Gary Alexander
24.53K Followers
With combined experience of covering technology companies on Wall Street and working in Silicon Valley, and serving as an outside adviser to several seed-round startups, Gary Alexander has exposure to many of the themes shaping the industry today. He has been a regular contributor on Seeking Alpha since 2017. He has been quoted in many web publications and his articles are syndicated to company pages in popular trading apps like Robinhood.

Disclosure: I am/we are long TLND. I wrote this article myself, and it expresses my own opinions. I am not receiving compensation for it (other than from Seeking Alpha). I have no business relationship with any company whose stock is mentioned in this article.