The XRP/BTC pair (XRP-USD) continues to be subject to the activity of BTC/USD, with the main crypto trading pair (Bitcoin to the dollar) now trading in a consolidation phase. In 2019, Bitcoin has emerged as a safe haven asset which is purchased by nationals of countries with floundering currencies. XRP and several altcoins have been feeling the pressure. But what does November hold for XRP/BTC?

Ripple continues to battle its protracted securities lawsuit, which has taken a new dimension. One of the investors who bought Ripple Labs XRP token has launched a class-action lawsuit against the firm, claiming he lost more than $118,000 investing into the company.

However, Ripple continues to remain resilient and is actually gaining in price following news that Walmart and Moneygram were building a Ripple-backed money transfer service for more than 5000 stores. This kind of exposure represents the most mainstream a cryptocurrency has gone, and marks the unique value proposition that Ripple has for existing business.

XRP has an inverse relationship with Bitcoin in the XRP/BTC pair. This is evident from the daily price chart, where we see that XRP/BTC broke the first channel to the downside at the same time that Bitcoin made its price recovery against the U.S. dollar a few weeks ago, surging from 7,700 to about 9910.

However, BTC has started to falter slightly against the USD and it has fallen to around 9,200. This move was captured in the XRP/BTC pair when it entered into a period of upward consolidation formed by the up channel. Within this up channel, Ripple has started to gain ground against BTC, pushing up from the channel's trendline toward its return line. 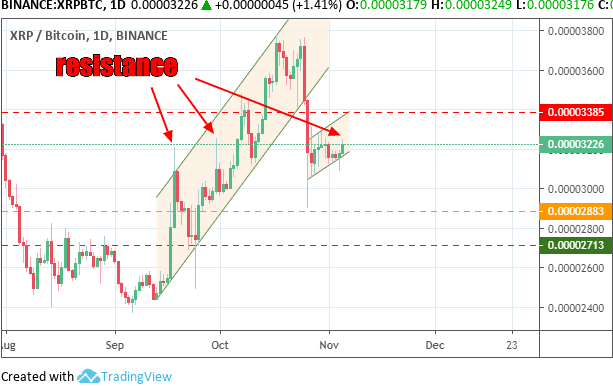 This is seen clearly on the 4-hr chart, where XRP/BTC is currently trading at 0.00003226. The daily chart shows reveals that at current price, XRP/BTC is trading around highs last seen on September 18 and Sept 30, 2019. 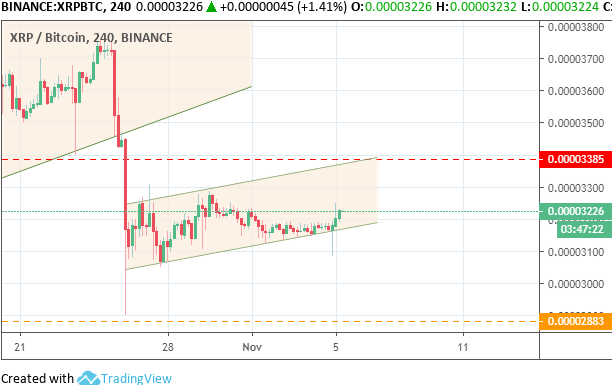 On the daily chart, the channel's return line intersects with the resistance line formed by the highs of late October 2019. This resistance level, located at 0.00003385, is the next upside target.

In the light of the chart information above, what should be the trade focus for XRP/BTC?

In the absence of genuine market moving fundamentals from Ripple, most of the drag on XRP/BTC will come from Bitcoin's activities elsewhere; specifically on the BTC/USD chart. BTC/USD has basically been consolidating with a downward tilt, so XRP/BTC looks set to consolidate with an upward tilt.

However, the combination of the sharp downtrend on XRP/BTC and the consolidation phase that has followed resembles a bearish flag pattern. This pattern tends to break to the downside, resulting in a measured move which is equivalent to the pole phase of the pattern (i.e., the initial downward drop).

If we are to consider the price action in the context of this pattern on the daily and 4-hour charts, then we should expect price to break below the flag and terminate with a measured move that at least, targets the 1st support at 0.00002883. If this move plays out and 0.00002883 is violated to the downside, then 0.00002713 comes into focus as a medium-term possibility.

On the flip side, price recovery on XRP/BTC to the channel's return line could subject that price level to further pressure. The immediate resistance at current price levels needs to be broken for this to happen. BTC/USD would also have to drop below 8,300 for such a move to manifest.

The long-term and mid-term outlook of the XRP/BTC pair is:

Long term, XRP/BTC is still technically in a downtrend, and the channel's return line at 0.00003385 could represent a good place to sell on rallies.

Medium term, price may remain range-bound within the rally. Short-term, we expect XRP/BTC to be mildly bullish, with the 0.00003385 resistance at the upper channel border capping price movements.

Did you know the crypto market is up 90% since Jan. 1st? Is the bear market over? Is Bitcoin going to shoot up like it did in 2017?

We provide news, research, technical analysis and more at the Coin Agora on all things crypto!

Sign up now and get instant access to our 2019 Pick Portfolio, where three of our picks are up more than 80% since January!

The Freedonia Cooperative
2.9K Followers
Author of The Coin Agora
We find small, new, and growing coins and get you in on the ground floor