Bank stocks have performed fairly well since Q3 earnings to the surprise of many. With the possibility of the trade war getting resolved and the hope that the Fed will have fewer rate cuts in the future. Bank of America (NYSE:BAC) is up nearly 18% in the past year with its break above $32 per share.

However, there are risks to bank stocks in the short term with a slowing economy, little business investment, and a challenging yield curve. If economic growth slows, bank stocks may retrace in the next few weeks to months. However, if no recession occurs, banks in the medium to long term should still be bullish despite any potential corrections from recent highs in the short term.

Given the backdrop, investors considering buying bank stocks should look to the best-of-breed banks - ones that have solid balance sheets, good management teams, and a diverse revenue stream.

In this article, we'll explore why Bank of America Corporation is one of those best-of-breed banks despite a challenging yield curve. I will also outline in this article how the executive management team is keeping its costs under control and effectively managing the credit risk.

The bank has consistently produced revenue of approximately $23 billion throughout 2019 and most of 2018. We can see from the chart below that net interest income was just over $12 billion in Q3, making up approximately 50% of the revenue for the bank. The other 50% of the revenue was from non-interest income or income from service charges and fees.

This diverse revenue stream has allowed the bank to perform well despite a challenging environment.

At times over the last few months, the spread was five basis points with the curve inverting briefly.

The reason the 2- to 10-year Treasury yield spread is so important is that banks earn profits on their loans with a loan spread.

On variable-rate credit products like credit cards and credit lines, banks charge a spread on the interest rate so that the customer can get charged a higher rate as yields or interest rates rise.

The wider the spread between what banks pay depositors and what banks charge their customers for their loan interest rates, the more profits or earnings the bank will generate.

With the Treasury spread being only 20 basis points over the last quarter, it's a challenging environment for Bank of America as well as other banks in the industry.

What A Difference A Year Makes

And when we look at this year from January to November, we can see that the yield spread has been stubbornly below 25 bps.

The challenging yield curve means that banks like Bank of America have to earn their profits in other areas besides variable-rate credit products, which include fee income from service charges, credit card fees, and wealth management services.

As I wrote at the onset, the good news is that Bank of America has a diverse stream of revenue whereby the bank earns roughly 50% of its revenue from fee income and the other half from loan spreads.

Net interest income was $12.3 billion for the third quarter and was slightly higher by $100 million since last year at this time. The flat net interest income compared to Q2 this year is clearly due to the narrow yield curve. 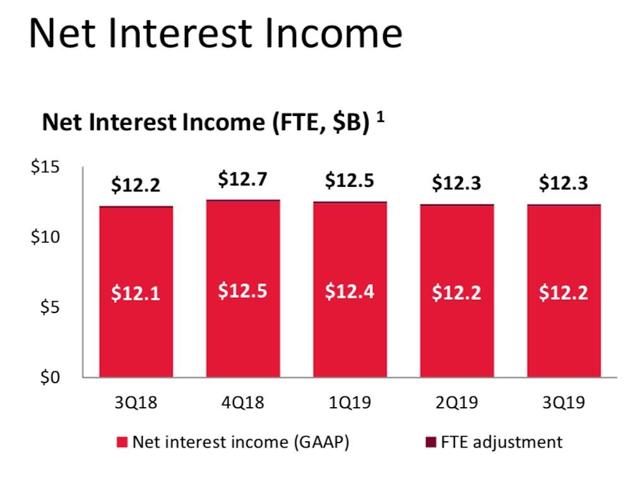 However, the net interest yield has held up fairly well, considering the circumstances, which include Fed rate cuts, a trade war, and slower economic growth.

I believe 2.89% is a very solid net interest yield, especially considering that the 2-10 yield spread has fallen by over 50% in one year. 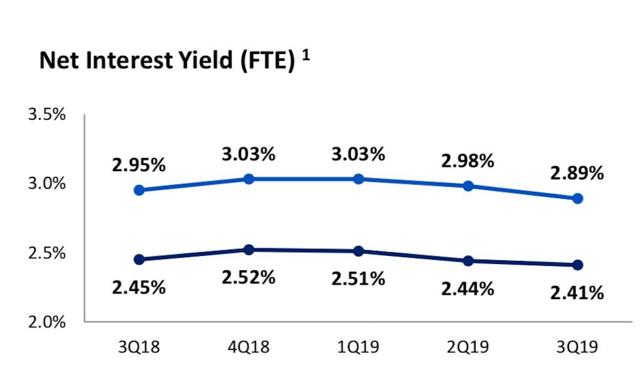 The growth rate of net interest income is still one of the best for the biggest banks in the U.S. Only JPMorgan Chase & Co. (JPM) has a higher growth rate with 21% versus BofA's 18% rise in NII over the last three years.

Citigroup Inc. (C) and Wells Fargo & Co. (WFC) have both struggled for different reasons, but nonetheless, their negative Net II growth rates help make the case that BofA is a best-of-breed bank in the sector.

If you want to know why BofA is so successful, the expense management under the leadership of Brian Moynihan is second to none.

The provision for credit losses, or PCL, was $779 million in the third quarter, which is up slightly from last year's $716 million. The PCL is essentially management's expectation of potential losses in the coming quarters. 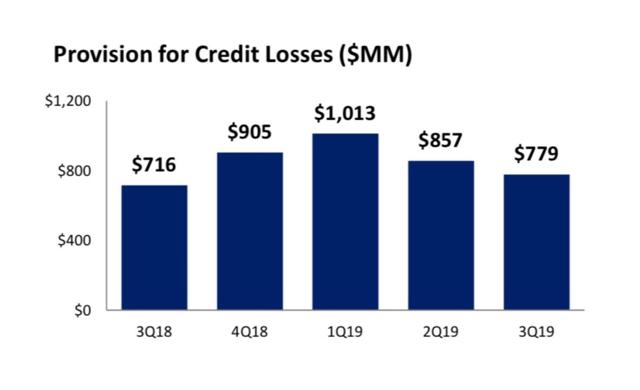 This is really a key metric because as the economy slows, banks are going to try to increase their margins. And there are only a few ways they can do that. Many banks are going to try to overextend into riskier credits, such as approving riskier credit cards because they need to make up for the lack of yield spreads on their creditworthy customers.

As the 2- to 10-year yield spread narrows, some banks may cut costs or add more wider-margin credit products to their credit portfolio. The result can often be higher net charge-offs and higher provision for credit losses.

The good news is that the $779 million PCL figure is the lowest number in the last five quarters, which is a reflection of the bank's executive management doing a great job and managing potential credit losses.

Net charge offs are the actual losses that the bank is incurring and charge-offs are down by more than 10%.

Net charge-offs were $811 million for the quarter, which is down from last year's $932 million. 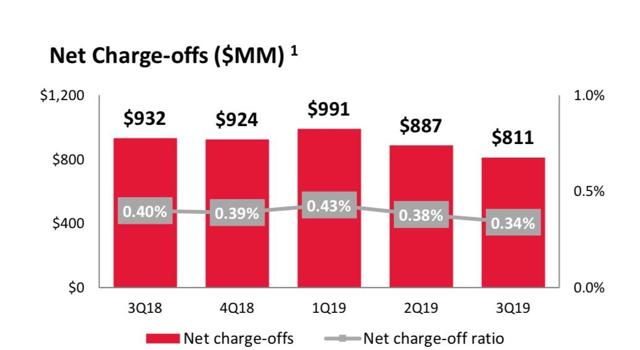 Bank of America is decreasing its charge-offs and reducing its provision for credit losses. In other words, it expects its losses to be lower going forward, even while it's increasing the loans to credit cards and to consumers. This is a great sign for the bank because it shows it's managing credit risk effectively considering the backdrop of lower yields and lower economic growth.

Bank of America is a best-of-breed bank by far above most of the banks in the country.

The bank's net interest yield is solid and only declined slightly from last year, which is remarkable because the 2- to 10-year yield spread has declined from an average of 50 basis points to approximately 20 basis points in the same period.

The bank's provision for credit losses has declined over the last few quarters and is only up slightly since last year. The bank's net charge-offs have declined since last year, which shows that the bank is managing its credit risk effectively.

Bank of America has maintained its efficiency ratio at 57% for the quarter and has stabilized it over the last year.

I believe Bank of America is in a great position to outperform the market in the medium to long term. However, there are risks to the economy in the short to medium term (Q1 and Q2 2020) if the trade war escalates and the economy slows down. If we have a protracted period of low yields and low growth, such as 1% economic growth, it's likely the stock will pull back.

However, I do believe in the long run, the stock will do well, and I'm still bullish because BofA is managed so effectively, with its solid revenue and yield spreads, effective expense management, and minimal credit risk. As a result, the bank stands to gain when the economy improves and the yield curve begins to rise again.

To have the next article emailed to you, click the "Follow" button and check "Get email alerts."

58 Comments
To ensure this doesn’t happen in the future, please enable Javascript and cookies in your browser.
Is this happening to you frequently? Please report it on our feedback forum.
If you have an ad-blocker enabled you may be blocked from proceeding. Please disable your ad-blocker and refresh.