American International Group's (NYSE:AIG) stock has performed well so far in 2019, as AIG shares have outperformed the broader market by almost 20 percentage points over the last 11 plus months.

Looking back, however, the stock performance has not been anything to write home about. To this point, AIG shares have underperformed the S&P 500 over the last 3, 5 and 10-year periods.

But, as I previously described here, AIG's path forward is slowly becoming clearer under the newish leadership team and, in my opinion, the insurer's most recent operating results supports the thought that AIG is still worthy of investment dollars.

The Latest Results Were "Good Enough" 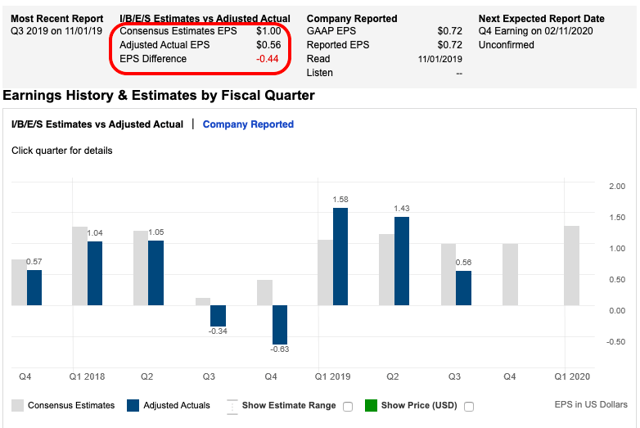 The company reported Q3 2019 EPS of $0.56, which is a significant increase from the year-ago quarter. 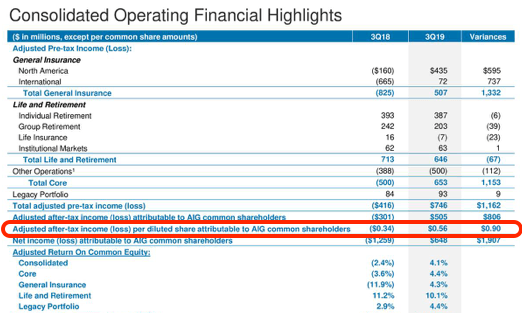 Highlights from the quarter:

AIG shares were initially down a few percentage points after the company reported its Q3 2019 results but the stock has performed well over the last week.

The real standout for the quarter was the General Insurance division, as shown above by the $1.3B swing in adjusted pre-tax income. The division saw premiums decline YoY but catastrophe losses, net of reinsurance improved by slightly over $1B from Q3 2018. 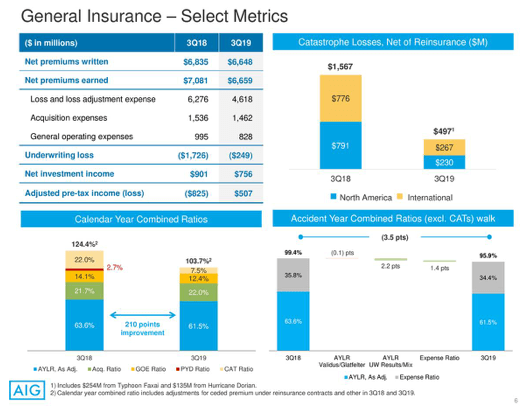 Management has consistently talked about improving the company's underwriting profitability by focusing on pricing discipline (among other things) and it appears that what they have implemented is slowly starting to flush through the system. AIG has also focused on risk management and implemented several new reinsurance strategies since Mr. Brian Duperrault took over as CEO, and these changes have already had a material impact on operating results.

In my mind, one of the most important takeaways from AIG's results was something that was missing from the report, i.e., a negative material reserve adjustment. Over the past few years, most analysts (including myself) pretty much expected to see on an almost quarterly basis some type of negative reserve adjustment. So while the lack of a material reserve adjustment may not sound like much, I believe that Mr. Duperrault is finally changing the narrative for this once unloved-insurance company. Dare we say that most (or all) of the skeletons are finally out of the closest?

When thinking about how to view AIG's quarterly results, I think that Mr. Duperrault said it best during the conference call:

Our results this quarter reflect the significant, ongoing work across the company to lay a foundation for long-term, sustainable and profitable growth.

Key words/phrases - "ongoing work", "foundation", and "sustainable and profitable growth". The Q3 2019 results show that Mr. Duperrault and team still have this company heading in the right direction. As such, the quarterly results were good enough for me to believe that the long-term investment thesis remains intact.

It also helps the bull case that management again reaffirmed that the company is positioned to achieve double-digit return on equity by fiscal 2021. Plus, it does not hurt that AIG shares are still attractively valued, even after the recent run-up in the stock price.

AIG shares are attractively valued when compared to its peer group.

AIG has been a turnaround story but there are still factors holding back the stock - i.e., low interest environment, macro concerns (Trade War and recession fears), restructuring costs, and other business-specific headwinds. So yes, AIG shares are still trading at an attractive valuation but management still has a lot to prove. Make no mistake about it, AIG has shown a lot of progress under Mr. Duperrault's leadership but this insurer is a multi-year story.

The biggest risk for any insurer, including AIG, is the sufficiency of the company's reserves. The company will likely have immaterial one-off reserve charges (positive and negative) on a somewhat consistent basis, but any material adjustment could negatively impact AIG's stock price.

Additionally, given the recent uncertainty in the market, it is important to remember that an economic downturn would negatively impact AIG's near-term business prospects.

AIG's Q3 2019 results were nothing to brag about, but I believe that management is doing all that they can to right a ship that was previously heading down a disastrous path. The operating results are not going to improve overnight and it may turn out to be a long road to recovery but, in my opinion, AIG has some great assets in its portfolio of businesses. Moreover, Mr. Duperrault without a doubt appears to be the right person for the job.

And while the recently announced partnership with Envestnet may not be a needle-mover anytime soon, these type of deals are exactly what Mr. Duperrault should be focused in the years ahead. I do believe that it is going to take time for the market to change its view on this global insurer so, in my opinion, AIG Tarp Warrants are the best way to invest in this global insurance company.

Disclaimer: This article is not a recommendation to buy or sell any stock mentioned. These are only my personal opinions. Every investor must do his/her own due diligence before making any investment decision.

If you enjoyed our stock coverage, please consider joining the Going Long With W.G. marketplace service. We cover at least one new small-cap company each month and we regularly update our thoughts on past recommendations. Additionally, subscribers have access to a Live Chat feature that allows for one-on-one and/or group conversations. *Start your free trial today*

WG Investment Research
8.36K Followers
Our President and CIO is a CPA with experience in public accounting and the financial services industry. He earned his Master of Accountancy degree in 2008 and his B.S. in Business Management in 2007. He is also a Level III CFA candidate. He has been intrigued by the market from the start. Over the years, he has learned that long-term investing is a discipline that, if followed, will help contribute to building lasting wealth. As such, most of our articles will be about the investments that we plan to hold for at least 3 to 5 years, as long as the company's story does not change. As a Seeking Alpha contributor, our main goal is to write about the companies that are key to our portfolio with the hope of promoting discussion (for or against the investment) from others within the SA community.Please visit our website for more information about W.G. Investment Research LLC.

Disclosure: I am/we are long AIG. I wrote this article myself, and it expresses my own opinions. I am not receiving compensation for it (other than from Seeking Alpha). I have no business relationship with any company whose stock is mentioned in this article.