October marked a respite from the heavy declines of September for the portfolio. However, this wasn't without some big swings in both directions. It certainly seems as if continued volatility is here to stay, and the rotation away from high growth names toward more value-based names is also in progress. October saw a net gain of just under 3%, compared to the growth in the index of 2.1%, with Project $1M outperforming by almost 0.8%. While October saw outperformance, I don't view any near-term underperformance that may occur in the portfolio as a negative. In fact, I believe that this is a healthy thing, as the declines in September make many of the holdings in the portfolio much more attractive.

My broader investment focus with Project $1M is the purchase and long-term hold of a clutch of high growth, cash generating businesses that are powered by secular tailwinds. The advantage of these secular tailwinds should be to allow the selected businesses to grow under any economic conditions that may be experienced over the life of the Project $1M portfolio (a decade or more).

Markets may move the prices of Project $1M businesses around here and there, depending on sentiment; however, I am focused on the long-term returns on invested capital that my businesses can generate and the opportunity to deploy that invested capital at high rates of return over a long-term horizon. For those that are new to the project, here are Part 1, Part 2 and Part 3 of the initial investments in the portfolio.

The overall objective of the portfolio is to turn a capital base of $275,000 that was initially deployed in November 2015 into $1,000,000 by November 2025. This will be done primarily through buying and holding high quality businesses, helping returns compound and minimizing tax and trading costs. The initial $275,000 in capital has been fully deployed and will not be added to for the rest of the project's duration. This past month saw Project $1M conclude its 4-year anniversary, achieving very meaningful outperformance vs the S&P 500, which I documented here. 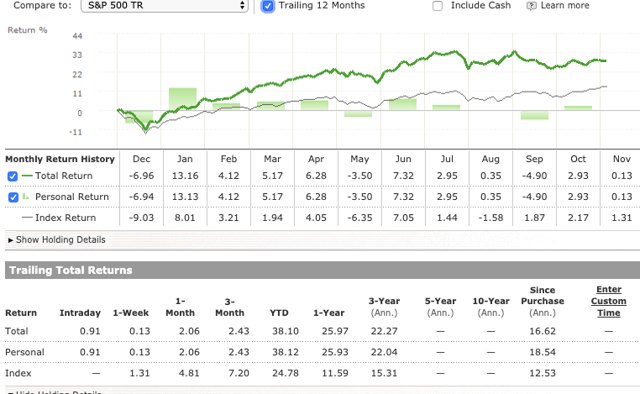 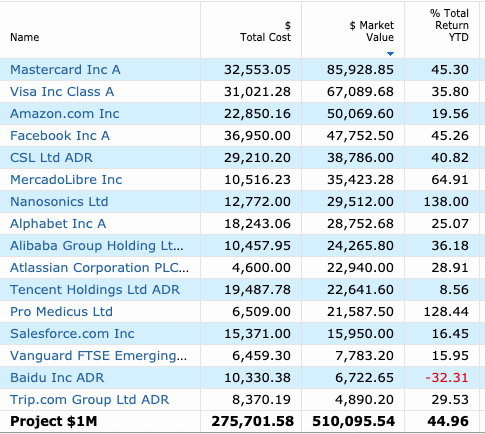 Project $1M ended October with a balance of just over $510,000 a level that it has generally been at since during the summer. With a couple of months to go to finish out the year, the portfolio has returned just over 38% in 2019 comfortably in excess of the 24.5% return of the S&P 500 during this period. Barring some massive correction in the last couple of months in the year, it appears as if the Portfolio may still return over 30% for 2019, well exceeding my own expectations and where I expected returns would come in. The last month saw a return to form for the portfolio's Chinese holdings, with Alibaba (BABA), Baidu (BIDU) and Ctrip (CTRP) all well up. CSL (OTCPK:CSLLY) which has been a very quiet, understated performer for the portfolio since inception also had a particularly strong month. Finally, Atlassian (TEAM) was a major casualty of the dramatic shift away from growth to value, something which I expected would be the case in my mid-year update, but which I was prepared to 'do nothing' about, barring dramatic declines in business performance.

Hot on the heels of an expected trade deal, Alibaba, Baidu, and Ctrip all had very strong months. Alibaba was up some 11%, while Ctrip finished up 16%, and Baidu an amazing 20% (from having done virtually nothing for most of the year except aggressively sell-off). The standout in my mind was clearly Alibaba. While it can be argued that Ctrip and Baidu, in particular, were aggressively sold off to crazy levels, the Alibaba result was exceptionally high quality. It just goes to show how very high quality businesses can ignore fickle trade wars. Alibaba posted top line growth of almost 40%, with cloud computing growing almost 60%. While I really like the core Alibaba e-commerce business, I believe that Alibaba's cloud computing business could be a monster, given Alibaba has such a pronounced lead on its competitors (more than double the market share of the nearest cloud competitors) and that cloud computing is really only in nascent stages of growth at this point. There is a reason that this business is one of the 5 great businesses that I'll never sell.

Similarly, Baidu had very strong share price appreciation, for the first time in months. While Baidu does have some real long-term structural concerns as a result of increased competition for high value searches from Tencent's (OTCPK:TCEHY) WeChat 'mini programs' ecosystem, I still believe this was a business that was massively oversold on concerns around declining profitability (resulting from heavy near-term AI investment) as well as flatline revenue due to a variety of macro and structural concerns. The mere indication that Baidu would have 'flattish' revenue for 2019 was enough to send the stock up nearly 10%.

With at least Phase 1 of the trade deal seemingly settled, I believe that the China stocks should show steady price appreciation through end of year and into 2020 also.

CSL has been a very quiet achiever for the Project $1M portfolio, rather unspectacularly recording a 39% return year to date. The manner in which it has done so isn't in flashy circumstances like Atlassian or Pro Medicus (OTCPK:PMCUF) (with large moves up and down), but rather in a very steady consistent way. I continue to like CSL long term for the rather non-discretionary nature of its core business. Unlike consumers who may buy less on Amazon (AMZN) or Alibaba in an economic decline, CSL's plasma-based products will continue to meet with high demand in all economic conditions. I view this as a particularly important attribute that this business offers Project $1M as we likely head into more depressed economic times in the years to come. CSL 112, the company's potential blockbuster "cholesterol killer", has made it into Phase 3 trials. Approximately 55% of drugs that make it to Phase 3 trials ultimately receive approval, and if successful, CSL 112 is expected to provide peak revenue of almost $10B, which would be a game changer for the business.

Atlassian feels market wrath for second month in a row

Atlassian was again a victim of the aggressive shift from growth to value-based businesses. I view this decline in share price of almost 14% for the month as nothing more than a shift in sentiment, and less about the actual performance of the business. Atlassian delivered a standout performance of almost 36% revenue growth in its more recent results. What's also interesting to note about the business is that like CSL, there is an element of defensibility about the business which should bode well long term. Atlassian's Jira software is used by IT organizations to track technology project management, an inherently sticky service. Unlike some other SaaS-based services, IT departments will be loath to shutter tools to manage and keep projects on track in the event of an economic downturn, with other services more likely to be cut in a pinch. Thus, I also view Atlassian's business as having an element of defensibility even though its high valuation may be in for a rerating in the event of a pronounced downturn.

The sentiment shift away from growth to value is likely to continue for the balance of the year, although I expect it to moderate more, as it has from September to October. Certain areas of the enterprise SaaS market, a culprit of the high valuation excesses of the last few years, have been meaningfully rerated down and now are starting to offer some real value.

While they may have further to fall, it could be interesting to nibble at some of the plays on offer. I'd have to think carefully as to what would be sold to make room for these, and I currently believe there is a spot for all of the positions the portfolio currently has. The way Baidu has played out reinforces my view of retaining even underperforming positions where the business is not broken, even though they may go through periodic testing times. From a Project $1M perspective, I wouldn't mind further declines that may occur in the portfolio as they would set up a good baseline for outperformance in 2020. I look forward to providing the final couple of updates for 2019, and then a 2020 outlook.

To see other ideas of high quality, growing businesses that are positioned to be long-term wealth creators, please consider a Free Trial of Sustainable Growth.

Disclosure: I am/we are long BABA, BIDU, CTRP, TEAM, TCEHY. I wrote this article myself, and it expresses my own opinions. I am not receiving compensation for it (other than from Seeking Alpha). I have no business relationship with any company whose stock is mentioned in this article.