Reports that the US and China may be finally nearing an agreement on the long-awaited "Phase 1" of a trade deal propelled US equity markets to new all-time record highs, but also sent US Treasury yields surging to the highest levels since late July, with the 10-year yield jumping 20 basis points to close at 1.93%. With earnings season winding down and on a slow week of economic data, back-and-forth trade headlines dictated near-term sentiment as investors shunned the long-outperforming defensive and yield-sensitive equity sectors in favor of this year's relative laggards including the more economically-sensitive energy, financials, and materials sectors. 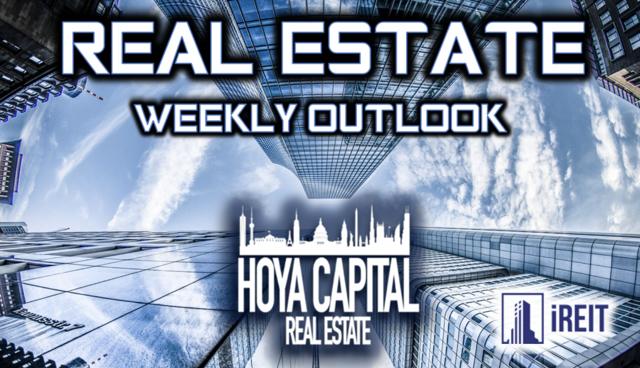 (Co-Produced with Brad Thomas through iREIT on Alpha)

Waning worries on the trajectory of global economic growth sent the SPDR S&P 500 ETF (SPY) higher by 0.9% while the Nasdaq ETF (QQQ) gained 1.2%. Rates up, REITs down? The paradigm that bedeviled real estate investors for much of the past three years showed hints of an unwelcome return this week. The broad-based Real Estate ETF (VNQ) dipped 3.3%, delivering its worst week since December 2018 and giving up its YTD outperformance relative to the major equity indexes. After breaching record highs in late October, REITs are lower by an average of 5% despite concluding a generally better-than-expected earnings season with more than half of the sector boosting guidance. 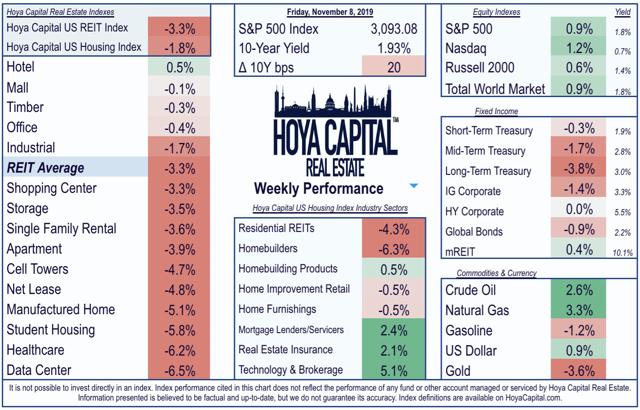 The Hoya Capital US Housing Index, the benchmark that tracks the performance of the US Housing Industry, finished the week lower by 1.8% as the high-flying homebuilders got dragged back down to earth by a number of bearish analysts calls, several of whom missed this year's nearly 50% rally. The headline of this week was the strong performance from the real estate technology and brokerage sector with Zillow (Z), Redfin (RDFN), and Realogy (RLGY) each jumping more than 10% on the week following a series of solid earnings reports. Zillow reported that traffic to mobile apps and websites hit an all-time high with monthly unique users up 5% to 195.6M, a decent leading indicator of future home buying activity.

As discussed, sector rotation was the story of this week in a "good news is bad news" theme for the more defensive and bond-like equity sectors including real estate and utilities. The financials (XLF), energy (XLE), and materials (XLB) sectors led this week's gains as crude oil prices gained nearly 3% on the week on a brightening outlook for global economic growth. 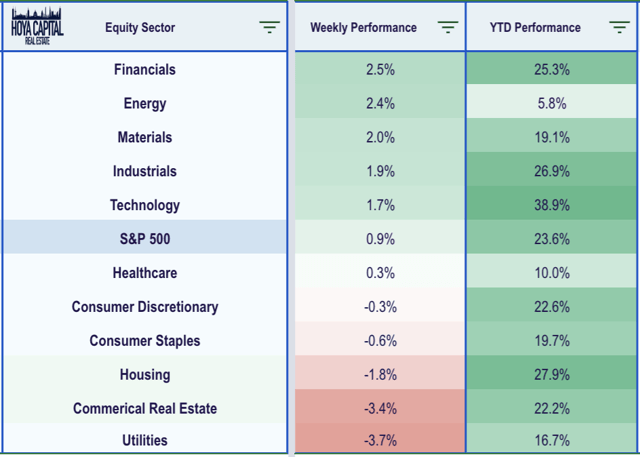 Within the REIT sector, hotels were the lone real estate sector in positive territory on the week while the more yield-sensitive sectors were the laggards. The worst week of 2019 for the REIT sector hit a handful of names especially hard including Bluerock Residential Growth (BRG), Senior Housing Properties (SNH), CareTrust (CTRE), Preferred Apartment (APTS), Healthpeak (PEAK), and Digital Realty (DLR). On the upside, Host Hotels (HST) and Ryman Hospitality (RHP) were among this week's winners. 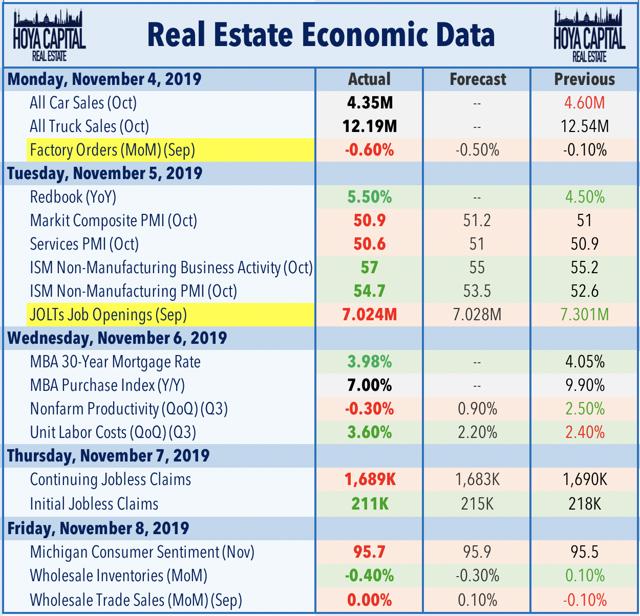 Real estate earnings season was generally better-than-expected with roughly 60% of REITs beating 3Q19 estimates while an impressive 50% of REITs raised full-year guidance. Residential REITs were again the standouts as the apartment, single-family rental, and manufactured housing REITs each reported a strong quarter of rent growth. Retail REITs also showed signs of stabilization amid an otherwise dire year of continued store closures. With a few stragglers reporting earnings next week, the final tallies aren't in quite yet, but 3Q19 looks to have continued the trend of accelerating same-store NOI growth across most REIT sectors. We'll have full coverage of earnings over the next few weeks within our REIT Rankings series. 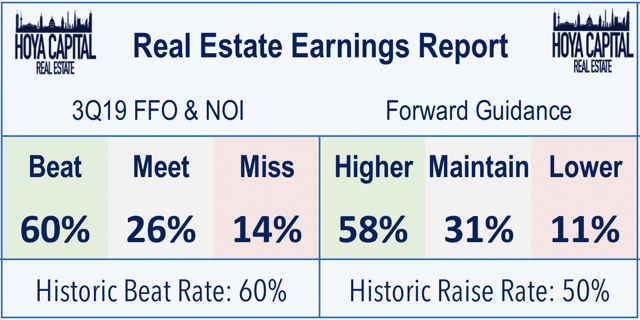 This week, we published our quarterly report on the Apartment REIT sector, Rent Control: The Dirtiest Words in Real Estate. Apartment REITs have delivered a strong 2019 as rent growth reaccelerated this summer to the highest rate since 2016. Occupancy remains near record-highs while turnover is at record-lows. All seven REITs are projecting same-store revenue growth within a 70-basis point spread of 3.0-3.7% with an average of 3.3%, up from the 2.6% rate achieved in 2018 and the 2.8% rate in 2017. 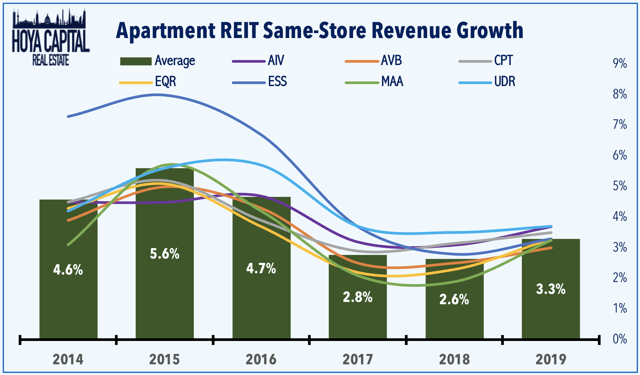 While demographic trends have been very favorable over the last decade, they will become a headwind by the end of the next decade. Almost 100% of the incremental growth in household formations have gone towards the ownership markets since 2017, but total household growth has kept the vacancy rate of rental households near historic lows. The strong jobs market powered the best year for household formations in a generation in 2018 with growth above 2.0%, and formations have averaged roughly 1.7% in 2019. 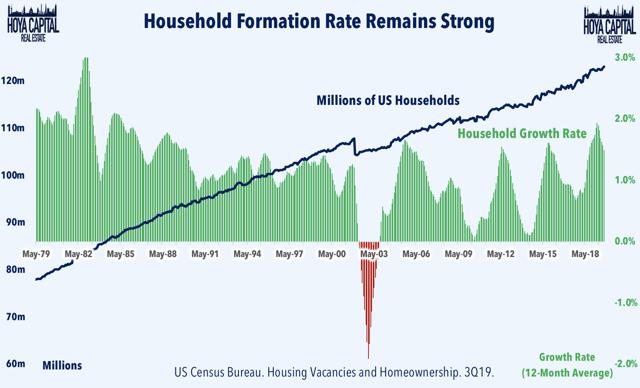 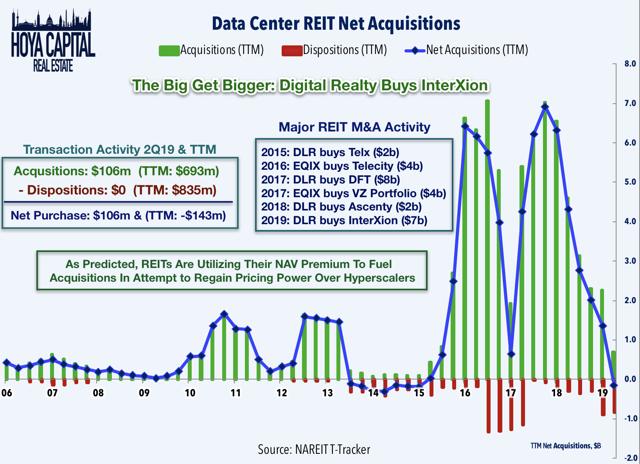 For all the focus on interconnection and future M&A possibilities, the performance of the data center REIT sector continues to be at the mercy of the quarterly net leasing activity figures - the most closely-watched metric for the sector. Data center leasing activity surged in the first-half of 2018, but dipped sharply into the end of the year, dragging with it the stock prices of these REITs. While still choppy, leasing has bounced back nicely in 2019, as have the REIT stock prices, and this past quarter's results were generally in line or slightly better the estimates. The $152 million in net incremental annualized revenues was a 27% jump from 3Q18, the first year-over-year increase in leasing in four quarters. 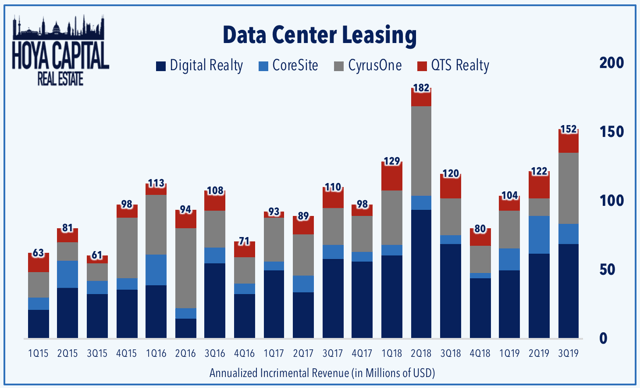 With this week's underperformance, the broad-based REIT ETFs have given up their YTD outperformance relative to the S&P 500, but remain higher by roughly 22% this year. The US Housing sector has climbed 28% this year with particularly strong performance from the single-family homebuilders, homebuilding products, and home furnishings sectors. At 1.93%, the 10-year yield has retreated by 75 basis points since the start of the year and is roughly 130 basis points below peak levels of 2018 around 3.25%. 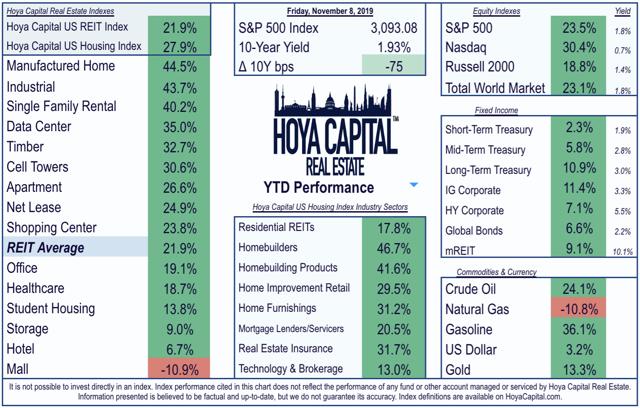 After this week's lull in the economic calendar, it will be a fairly busy week of inflation and retail sales data. CPI is released on Tuesday while PPI comes out on Thursday. Last month, inflation data came in cooler-than-expected. Housing costs continue to be the primary driver of what little overall inflation that there is. Consistent with earnings results from the apartment REITs and private-market data showing a reacceleration in rents since late 2018, at 3.5%, CPI:Shelter is within 20 basis points of multi-decade highs and at 3.8%. Retail sales data is released on Friday, as is Industrial Production. 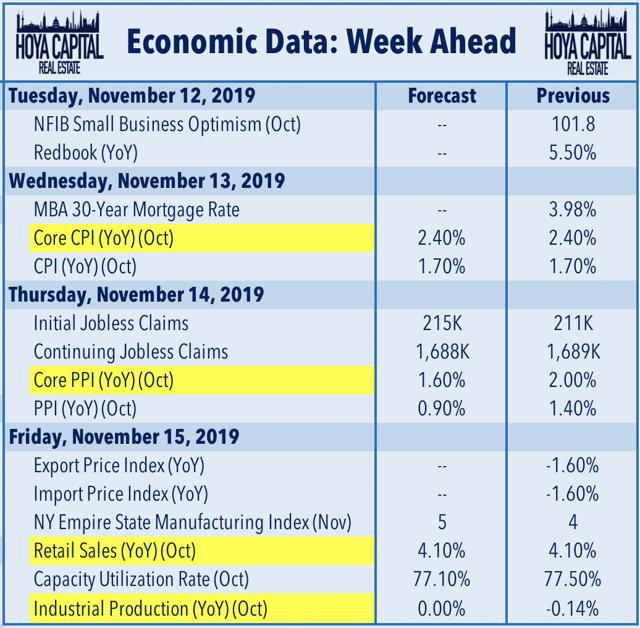 If you enjoyed this report, be sure to "Follow" our page to stay up-to-date on the latest developments in the housing and commercial real estate sectors. For an in-depth analysis of all real estate sectors, be sure to check out all of our quarterly reports: Apartments, Homebuilders, Student Housing, Single-Family Rentals, Manufactured Housing, Cell Towers, Healthcare, Industrial, Data Center, Malls, Net Lease, Shopping Centers, Hotels, Office, Storage, Timber, and Real Estate Crowdfunding.

Hoya Capital is excited to announce that we’ve teamed up with iREIT to cultivate the premier institutional-quality real estate research service on Seeking Alpha! Sign-up for the 2-week free trial today!

Nothing on this site nor any commentary published by Hoya Capital is intended to be investment, tax, or legal advice or an offer to buy or sell securities. Neither the information, nor any opinion, contained on this website or any published commentary by Hoya Capital constitutes a solicitation or offer by Hoya Capital or its affiliates to buy or sell any securities, nor shall any such security be offered or sold to any person in any jurisdiction in which such offer, solicitation, purchase, or sale would be unlawful under the securities laws of such jurisdiction. No representation or warranty is made as to the efficacy of any particular strategy or fund, or the actual returns that may be achieved.

Investing involves risk. Loss of principal is possible. Investments in real estate companies and/or housing industry companies involve unique risks. Real estate companies, including REITs, may have limited financial resources, may trade less frequently and in limited volume, and may be more volatile than other securities. Many factors may affect real estate values, including the availability of mortgages and changes in interest rates. Real estate companies are also subject to heavy cash flow dependency, defaults by borrowers, and self-liquidation. The housing industry can be significantly affected by the real estate markets. Compared to large-cap companies, small and mid-capitalizations companies may be less stable and their securities may be more volatile and less liquid.

There are also unique risks associated with investing in ETFs. Shares may be bought and sold in the secondary market at market prices and are not individually redeemed from the Fund. Brokerage commissions will reduce returns. Although it is expected that the market price of an ETF will approximate the Fund's NAV, there may be times when the market price of an ETF is more than the NAV intra-day (premium) or less than the NAV intra-day (discount) due to supply and demand of the ETF or during periods of market volatility.

Before acquiring the shares of an ETF, it is your responsibility to read the fund's prospectus. The prospectus to the ETFs in which Hoya Capital advises are available at www.HoyaETFs.com.

An investor cannot invest directly in an index. Index performance does not reflect the deduction of any fees, expenses, or taxes. The information and any index data presented do not reflect the performance of any fund or other strategies or accounts managed or serviced by Hoya Capital, and there is no guarantee that investors will experience the type of performance reflected.

Data quoted represents past performance, which is no guarantee of future results. The views and opinions in all published commentary are as of the date of publication and are subject to change without notice. There is no guarantee that any historical trend illustrated will be repeated in the future, and there is no way to predict precisely when such a trend will begin.

Commentary and data are believed to be accurate, but we cannot guarantee it's accuracy. We do not represent that it is a complete analysis of all factors and risks. It should not be relied upon as the sole source of suitability for any investment. Please consult with your investment, tax, or legal adviser regarding your individual circumstances before investing.

Disclosure: I am/we are long RLGY, Z, RDFN, LEG, MHK, PGR, BAC, HBAN, MTB, TWO, DLR, EQIX, COR. I wrote this article myself, and it expresses my own opinions. I am not receiving compensation for it (other than from Seeking Alpha). I have no business relationship with any company whose stock is mentioned in this article.

Hoya Capital Real Estate advises an ETF. In addition to the long positions listed above, Hoya Capital is long all components in the Hoya Capital Housing 100 Index. Real Estate and Housing Index definitions and holdings are available at HoyaCapital.com.

102 Comments
To ensure this doesn’t happen in the future, please enable Javascript and cookies in your browser.
Is this happening to you frequently? Please report it on our feedback forum.
If you have an ad-blocker enabled you may be blocked from proceeding. Please disable your ad-blocker and refresh.