As with most quarters, Glu Mobile (NASDAQ:GLUU) seems to dip following the release of earnings. For years now, the mobile-game developer has taken numerous steps toward building quarterly bookings up to the recent level of $120 million, yet the stock has seen the market cap unable to hold a valuation above $1 billion. The inability to generate meaningful bookings off new games has held the stock back, but my investment thesis remains bullish on the stock.

While the WWE game was a horrible flop during Q3 only generating $1.5 million in quarterly revenues, Glu Mobile still generated record quarterly bookings of $120.4 million. Bookings were up 20% YoY due to the success of Diner DASH Adventures with $14.7 million in Q3 bookings. The company even beat corporate guidance of $111.0 million at the midpoint.

While it's almost incomprehensible to have failed this badly on the WWE game, Glu Mobile still generated nearly 17% bookings growth from their three growth games and added $16.2 million in bookings from new games. The company is seeing a decline from catalog games, including Cooking Dash due to the new game released in the Dash franchise to offset some of these big gains in the other categories. 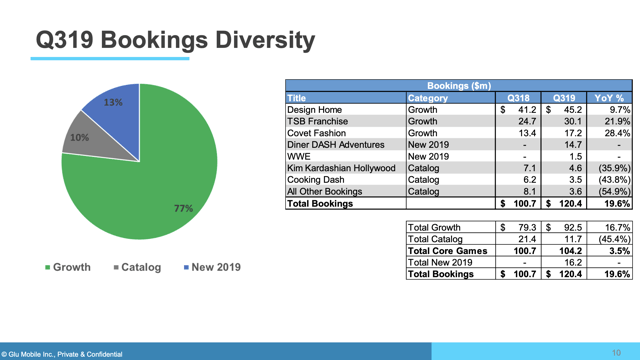 Investors were apparently disappointed with the Q4 outlook and the 2020 guidance, but the details are actually very impressive. The company is guiding towards 2019 bookings of ~$417 million.

The key to the 2020 guidance is low-single digit growth over the 2019 total, plus any bookings from several new games to be released in 2020. In essence, Glu Mobile is guiding to somewhere around $430 million in bookings from existing games plus an unknown amount depending on the success of titles like Disney Sorcerer's Arena and Deer Hunter Next.

The frustration from another failed game launch shouldn't cause investors to abandon an investment in this stock. The above guidance for 2020 should start with a base case of $450 million in bookings, yet the stock trades at a market cap of $900 million with about $100 million in cash on the balance sheet.

A simple look at the forward EV/S multiple has the stock trading far below the valuations of competitors like Zynga (ZNGA) and Take-Two Interactive (TTWO). The crazy part is that all three stocks merged back in April near a 3x EV/20 revenues multiple.

Remember, these valuations are based on at least three new games only, generating about $20 million in bookings during 2020. When a secondary game like Diner DASH Adventures can generate nearly $15 million in one quarter alone, the upside potential is enormous. The problem is that Glu Mobile has a history of failing miserably with new games.

The key investor takeaway is that Glu Mobile remains in deep value territory as the market overlooks consistent growth to focus solely on the failures of new game releases. Even with only meager bookings growth in 2020, the stock should see the EV/S multiple double back to the peak level in 2019 and similar to peers.

Stone Fox Capital
38.27K Followers
Author of Out Fox The Street
Out Fox the market with misunderstood, high reward opportunities
Stone Fox Capital Advisors, LLC is a registered investment advisor founded in 2010. Mark Holder graduated from the University of Tulsa with a double major in accounting & finance. Mark has his Series 65 and is also a CPA.

Disclosure: I am/we are long GLUU, ZNGA. I wrote this article myself, and it expresses my own opinions. I am not receiving compensation for it (other than from Seeking Alpha). I have no business relationship with any company whose stock is mentioned in this article.