Allena Pharmaceuticals (ALNA) recently announced the results of their reloxaliase Phase III trial (URIROX-1) with great excitement and key endpoint success. The market made its interpretation of the results exceedingly clear sending the stock reeling 60% following the release of the results. The week closed with another 10% loss, dropping the company down to $2/share. When studying the positive spin provided by the company it is hard to understand how the shares would go anywhere but up. Diving deeper into the data - and understanding the results from some key competitors - provides important information to any potential investors. The outcome of this trial reinforces our predictions shortly after ALNA's IPO whereas the company finds itself outclassed and fighting an uphill battle.

ALNA's URIROX-1 trial was the first of their two Phase III trial studying reloxaliase (their lead compound, formerly ALN-177) in Enteric Hyperoxaluria. The headline results read that there was a 22.6% reduction in oxalate excretion (UOx) over the course of 4 weeks and that this was a statistically significant finding (p=0.004). The market immediately (and relentlessly) punished the stock, raising the question: what went wrong? Let's unpack the details of this study and see if we can see where the market found its cause for derision. 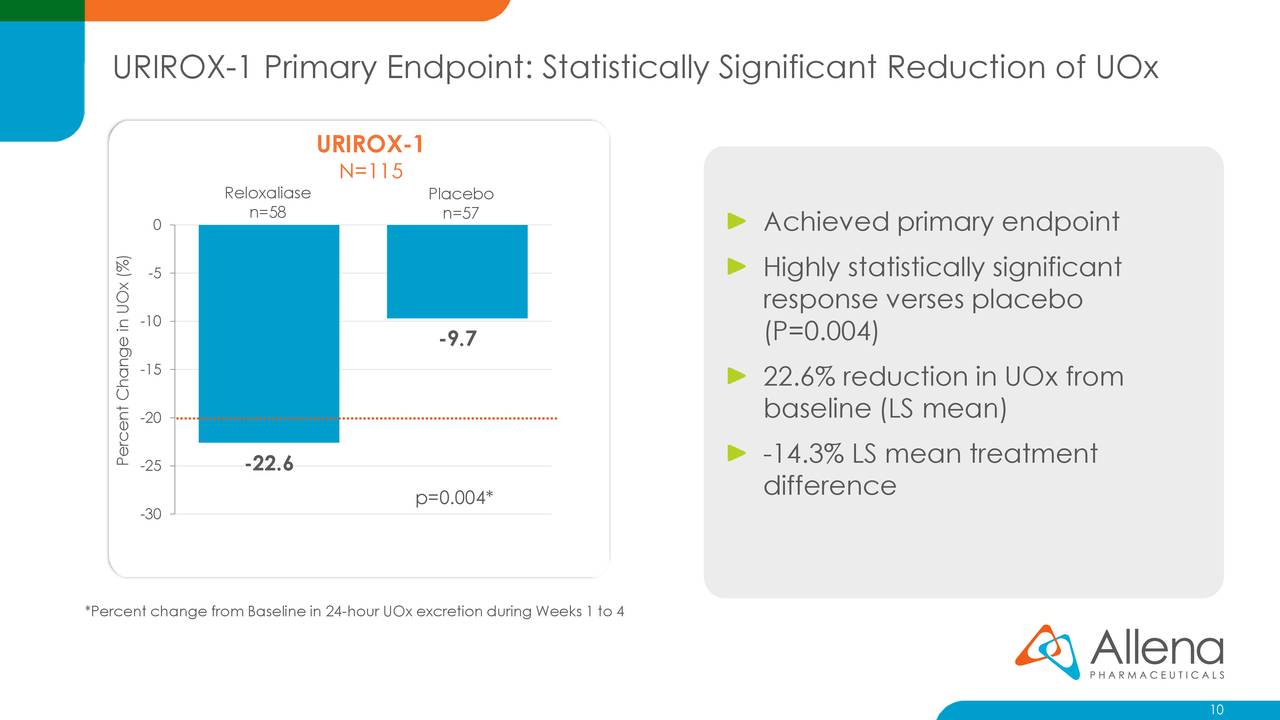 The URIROX-1 trial in 115 patients demonstrated a clear achievement of the study's primary endpoint: % change from baseline. Let that sink in for a second - the primary goal was a change from baseline. Using this rationale it would appear that the placebo also worked towards this endpoint (although significance was not calculated). Reloxaliase showed a 22.6% reduction in UOx while the placebo demonstrated a 9.7% improvement - a difference in 12.9%. It would be interesting to dive deeper into the placebo population and see what other changes to their diet or behavior which may explain some of the reduction.

These patients had a much higher instance of kidney stones (2x) which may have been an impetus to modify their behaviors in a natural attempt to prevent this painful condition, or it may have suggested that the patients were worse off in the first place. The glaring issue was made clear when studying the secondary endpoint: % of patients showing >20% improvement. This number didn't make the headlines because it identified that there was not a significant increase in the number of patients showing >20% improvement using Reloxaliase when compared with placebo (see below). 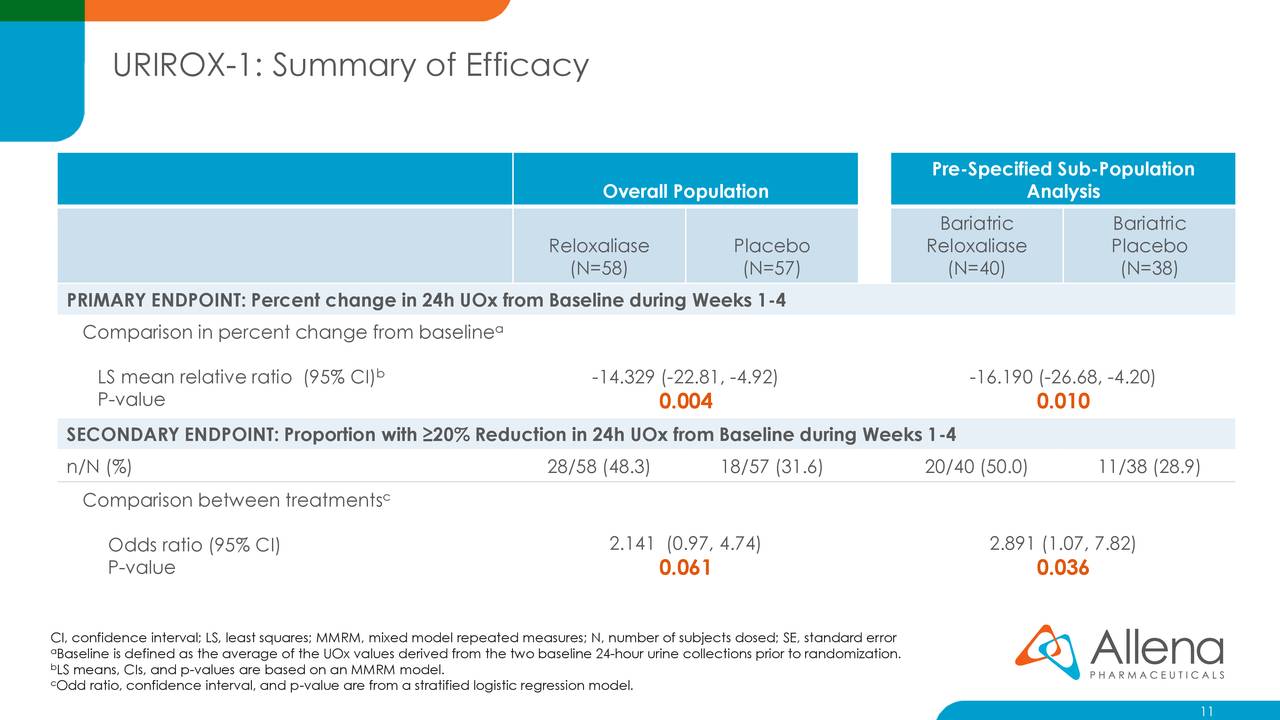 These are not the big numbers that ALNA was depending on to get the FDA onboard with their filing - or to get out ahead of their competitors. It also continues to sit squarely within the expectations from previous experiments in showing that reloxaliase produces a roughly 24% decrease in 24H UOx levels (average of past trials, and URIROX-1). Although the consistency could be considered a positive, this will be highly dependent on cooperation from patients. The dosing appears to be 3-5X per day with a meal or snack. If patients are not consistent (especially possible over the longer URIROX-2 study) the results may suffer.

It is important to note that the primary endpoint for URIROX-2 is the same as URIROX-1 with similar secondary endpoints at the 4-week period. The other difference is the analysis of 24H UOx levels at 16-24 weeks and the size of the trial (400 patients). This is likely to improve the chances for significance in their 4wk secondary endpoint, although the overall difference between placebo and treatment populations may not increase. Although we must wait and see how the larger URIROX-2 trial goes, the endpoints that the company will rely on for BLA filing are the same as seen for URIROX-1. The uninspiring results seen so far make the markets nervous, and hence the punishment that ensued the posting of the trial outcomes. 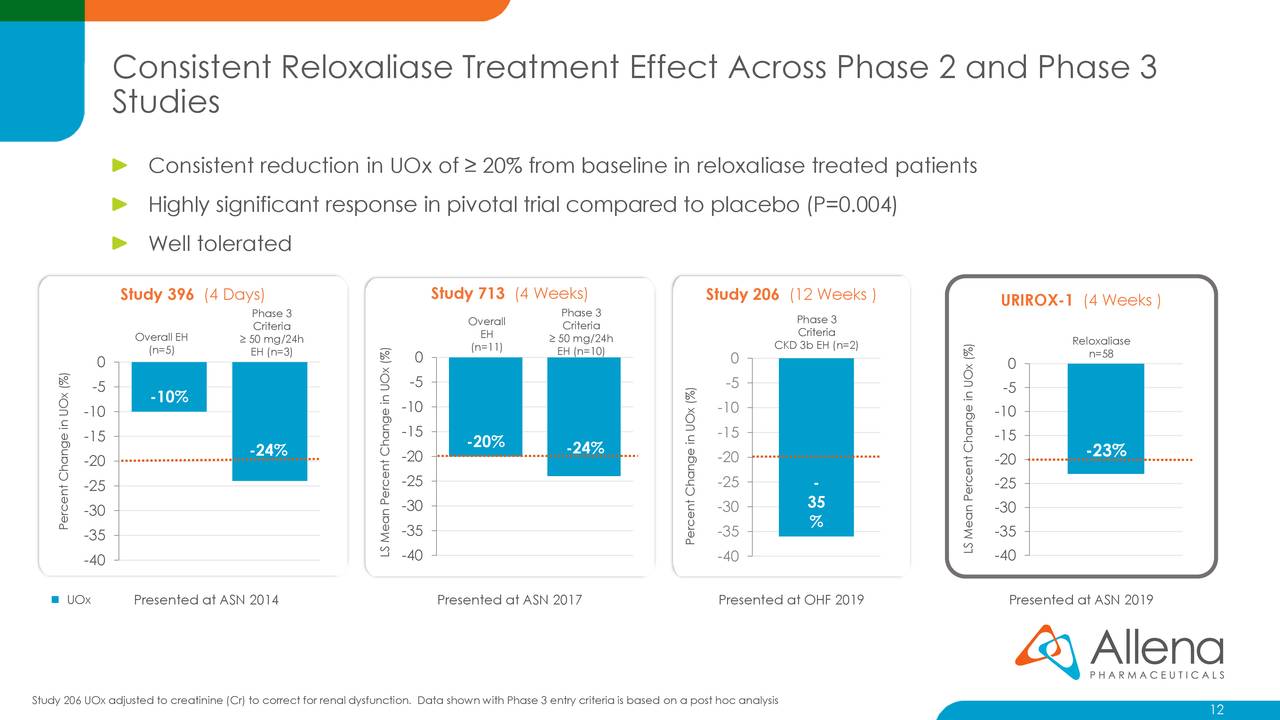 Although we will not do a deep dive into any of ALNA's competitors for the sake of brevity (each deserve their own analysis) it is important to note that they do exist and are performing well. Two of the companies are OxThera and Alnylam (ALNY) that are progressing with their own therapeutics in the space. OxThera's treatment demonstrated an improvement over baseline of 32% (p=0.018) in an earlier study along with a simpler dosing strategy (2x a day vs. 3-5x a day for ALNA). Alnylam on the other hand is focused on RNAi technologies (uses of which they have already demonstrated commercial success in more complex diseases). Alnylam's Lumasiran is rapidly progressing through clinical trials - as the company is rapidly developing their pipeline and growing with cash from their early successes.

In their Phase I/II trial which was completed and final endpoints provided the compound (administered either monthly or quarterly) resulted in a 75% maximum reduction in UOx, with a sustained 66% improvement from baseline at 4 weeks. Alnylam has fully enrolled their Phase III trial (ILLUMINATE-A) and expect early readouts this year. Using this data (and the significant improvements for patients) Alnylam expects to file with global regulators early next year.

With these two competitors showing greater efficacy compared to ALNA's URIROX-1 results, the market begins to wonder what the investment thesis is. As they continue working towards their URIROX-2 trial with enough statistical power for a filing, their primary competition is barreling towards filing with global regulators before their trial is complete. What advantage will ALNA have over ALNY to convince the FDA that their BLA should be approved? From the early numbers, and early mover status, ALNY appears to have all the chips in this game.

Based on currently available data, we believe that the company has roughly $37M in cash on hand based on their quarterly cash burn of $11.3M and cash of $48.5M as of June 30th. The company has 23.5M shares outstanding and is minimally held by insiders (3.62%) with a significant institutional ownership of 33.9%. These institutional investors are well informed and not easily swayed by positive headline numbers - they know how to read into the results and also know about the competition. The company carries $10.7M in debts and has already reached out to the markets this past year to raise capital with a 2.6M share direct placement which raised roughly $9.5M in June at a price of $3.80/share.

With a share performance seen below it will be hard for the company to continue to raise capital if needed without a massive share dilution. There are also not an abundance of shares short which could drive the company upwards on any positive news - the longs are in full control depending on their expectations. With the cash stores insufficient for another full year of operations at their current burn rate (with a large clinical trial still to absorb), we believe that the company will have to get creative or dilutive. This may have contributed to the market abuse this week where participants realized that the company would not be able to file with regulators early based on strong results - instead they would have to figure out how to make it through a second large trial and eventual marketing. The numbers are no longer simple.

It is possible that the outcomes and concerns we have listed out do not come to fruition over the coming months. This represents the bulk of the risk associated with our bearish thesis. It is possible that ALNA's URIROX-2 trial will present significantly stronger results that demonstrate greatly improved outcomes in patients - especially in the 24wk follow-up period. It is also possible that ALNA's competitors (primarily ALNY) will run into complications with their FDA filings which may delay their entrance into the market and allow ALNA to gain traction in the interim.

It is also possible that ALNA will find success with their other pipeline assets which may provide a significant boost to their share price on the excitement - providing the company with a strong boost with the opportunity to dilute their shares for a reasonable return. As the outcomes from the URIROX-2 trial are not expected in the near term we do not believe that they are a significant risk during this time, instead being something on the radar for longer the longer-term thesis.

Our early predictions with regard to this company have appeared to find quick support in the markets and trial results of both ALNA and its competitors. After pricing at $14/share the company has rarely seen their share price above that level - with this year sitting mostly below $8/share. With their recent move to $2, the total loss for early investors is at a staggering 86%, and this may not be the end with potential losses based on trial results, competitor successes and share dilutions on the horizon.

Market participants were hopeful that the URIROX-1 trial would be a change in pace and potentially improve the outcomes for the company. It appears that the majority of investors have now decided that the waiting (and losses) is no longer working as the upside is darkly clouded. We don't believe this will be the last hard week for ALNA, but more importantly, we do not know what will create a positive kick for the company.

Scientist of Fortune
1.54K Followers
I am an investor with a background in biotechnology and genetics. My Ph.D. education and professional experience are focused on genetics, stem cells, CRISPR, next generation sequencing and gene therapy.  My investments and investment ideas are focused on long plays on under-appreciated/revolutionary products at the cutting edge of science with a few short ideas based on concerns related to the scientific underpinnings of a select number of companies.