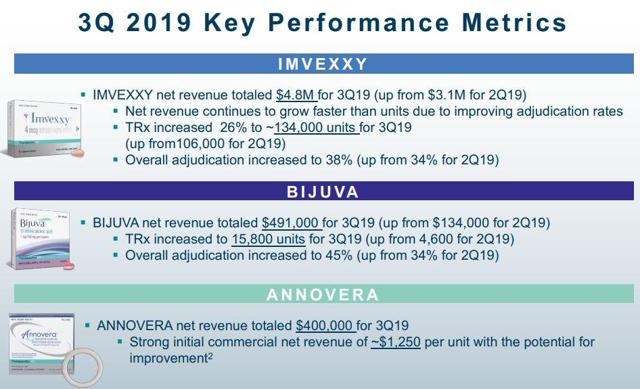 I believe the Q3 earnings not only illustrates the company's commercial strength, but it also provides me with some confidence they will be able to carry this momentum into 2020 and finally start delivering for its shareholders.

I intend to review the company's Q3 earnings and go over some specific details from the earnings call. I discuss the company's commercial progress and why investors should be confident the company will hit their Q4 guidance. I reveal my plans for my TXMD position as we closeout 2019 and enter a pivotal 2020.

The company has recorded another quarter revenue growth with an overall net revenue of $23.7M, which was up from $6.1M in Q2. 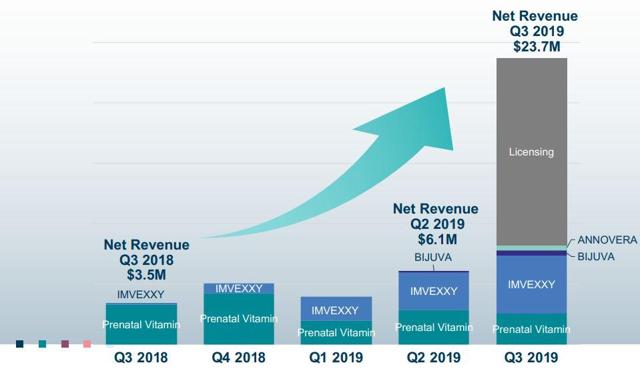 In terms of FDA approved products, the company pulled in $5.7M, which was at the upper-end of TherapeuticsMD's Q3 guidance. The company's prenatal vitamin business continues to produce acceptable revenue and was able to contribute $2.25M in Q3.

Moreover, the company had $15.5M from a licensing agreement for IMVEXXY and BIJUVA from Theramex. The company continues to report strong growth for IMVEXXY with net revenue coming in at $4.8M, with net revenue growing 53% over Q2. BIJUVA only pulled in $490K, however, that's in line with TherapeuticsMD's anticipations. ANNOVERA was able to pull in a respectable $400k despite launching in late Q3.

TherapeuticsMD's net loss was ~$32M, which was down from $55.2M in Q2. This was primarily due to $15.5M from the Theramex deal. If we remove the licensing revenue, the company would have a net loss of $47.5M.

The company finished the quarter with $155.3M in cash, but the company recently executed a secondary that provided an additional $77M. Combining the raise with the cash position gives the company a "proforma cash" balance of $232.3M. 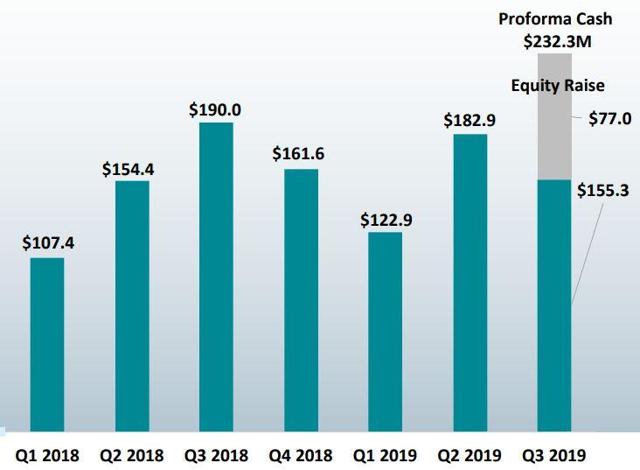 TherapeuticsMD has the prospect of pulling down two more $50M tranches from their term loan from TPG Sixth Street Partners. The first $50M tranche is contingent on the FDA's decision to make ANNOVERA the 19th category of contraception (Figure 5). It doesn't look like that is going to happen in the immediate term, so, the company is attempting to renegotiate those tranche terms with TPG Sixth Street Partners. 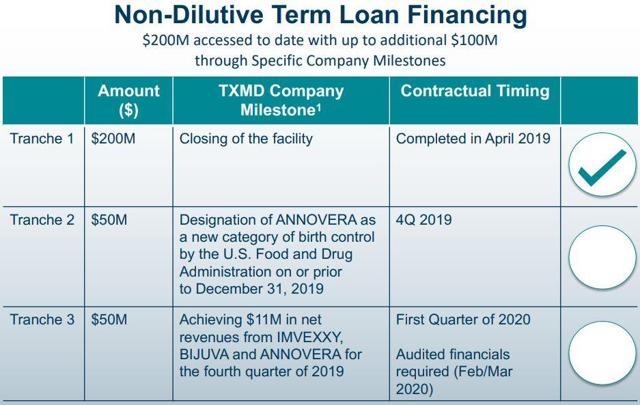 The second tranche is contingent on the company attaining $11M in net revenue from IMVEXXY, ANNOVERA, and BIJUVA in Q4 of 2019. This appears to be obtainable, and the company expects these three products to pull-in $11-13M in Q4 (Figure 6). 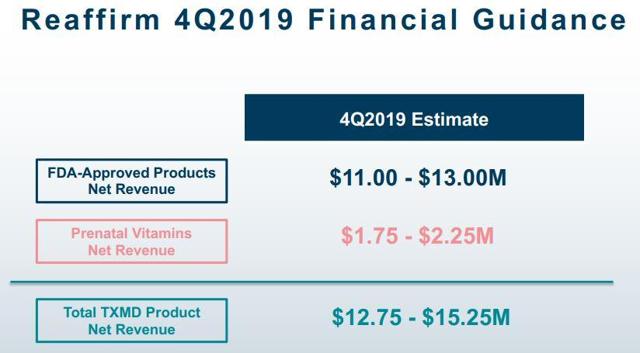 If the company can fulfill the requirements for the remaining tranches, the company would have approximately ~$332M for funding operations and supporting commercial activities.

IMVEXXY continues to have a successful launch with adjudication rates and the calculated net revenue per unit continuing to grow (Figure 7). 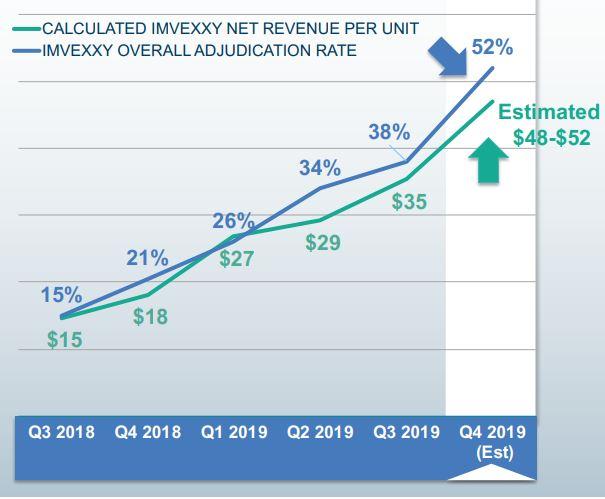 Looking at the figure above, we can see that October's adjudication rates were roughly 52%, which is a 14% increase over Q3. This increase is significant because the calculated net revenue per unit should increase in Q4 over Q3, which should lead to an increase in IMVEXXY revenues.

BIJUVA has also experienced strong growth in their adjudication rates that were at 56% in October, which was an 11% increase over Q3 (Figure 8).

ANNOVERA launched in late September but the early numbers are encouraging 62% unrestricted coverage. The company believes they will record sales of a minimum of 2,800 units in Q4 at $1,250 to $1,400 per unit. What is more, the company is working with Amazon's (AMZN) PillPack in order to quickly fill the demand.

Altogether, the company appears to be opening up their stride and looks to be gaining some momentum on the commercial front. Although I really enjoy seeing a steady climb in sales and script numbers, I am more excited about the company's progress with payers. It looks as if all three products are making inroads and patients are refilling the company's products.

Despite the company's commercial progress, not all longstanding TXMD investors are content with their investment. Once again, the company has tapped the market to fund the company's operations. The recent offering was disappointing to say the least… investors have endured numerous secondary offerings over the years and have picked up the bill time and time again. I was hopeful the TPG Sixth Street Partners funding eliminated the need for another secondary, but it looks the ANNOVERA stipulation prevented the company from pulling down the second tranche to avoid another offering. On the other hand, I didn't see an immediate need for funding. The company had over $200M in the bank with the potential for another $100M in tranches. I know commercial launches are expensive and the company is increasing their commercial capacity, but it is hard to imagine the company was going to be bouncing checks in 2020. Perhaps the company has plans and will be making a few deals to expand their pipeline or portfolio in the near future? Maybe the OpEx is going to balloon in the coming quarters and will greatly outpace revenue growth? Whatever the reason, the recent offering didn't help with investor sentiment and should be considered a downside risk until the break-even line is in sight.

TXMD had a solid Q3 and was able to hit the upper-end of their Q3 guidance. Moreover, the company reiterated its potential to hit their Q4 guidance, which should allow them to pull-down an additional $50M in non-dilutive funding. The company is attempting to amend the second tranche with TPG Sixth Street Partners that requires ANNOVERA to be the 19th category of contraceptive. Overall, the company has established some commercial momentum that has set up 2020 to be a pivotal year for the company and TXMD investors.

What's My Plan? My TXMD position is still too heavy, and I going to hold off on adding to my position until 2020. I have been stalking the options market for some discounted call options, but I haven't found anything worthy of a buy. I am going to start downsizing and closing out some speculative positions and will set some funds aside for TXMD in 2020. The Street expects the company to start showing impressive revenue growth in the coming years (Figure 9) which should generate a similar action in the share price. 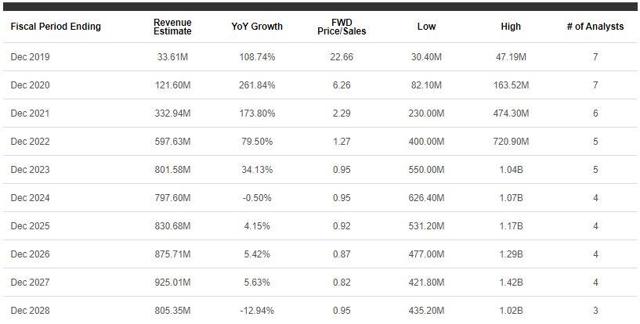 Despite the long-term prospects, I am going to keep my hands in my pockets until I see the company start tracking along a path to hit its 2020 revenue projections. I may have a bullish long-term outlook for TXMD, but I need the company to hit the market's expectations in order for me to have some confidence to commit additional funds to this ticker.

Disclosure: I am/we are long TXMD. I wrote this article myself, and it expresses my own opinions. I am not receiving compensation for it (other than from Seeking Alpha). I have no business relationship with any company whose stock is mentioned in this article.