In my opinion, Fox Corporation (FOXA)(FOX) is one of a few big media companies that is able to adapt to the shifting media landscape without the need to drastically change its business model. Led by Lachlan Murdoch, Fox Corporation, in my opinion, has an edge in the news business and a number of competitive advantages in other fields, which makes its stock a solid long-term play that will yield great results in years to come. Back in August, I opened a long position in the company and have no reason to close it in a foreseeable future.

Last Wednesday, Fox announced its earnings results for Q1, which were above the Street's expectations. Revenues for the three-month period were $2.67 billion, up 5% Y/Y, while earnings per share of $0.83 were higher than the overall consensus of $0.69 by 14 cents. The company continues to have two main sources of income, which include advertising and affiliate fees. While we might argue that cord-cutting is disrupting the industry and gives tech companies the ability to enter the media business, those numbers clearly show that Fox is able to adapt to the changing environment. It’s true that the increase of affiliate revenues by 4% in Q1 was mostly thanks to higher programming fees, as the average rate per subscriber increased during the period. Nevertheless, as a conservative powerhouse with no real competition, Fox, in my opinion, could justify the increase of those fees as the new political season will drive viewership numbers higher due to the upcoming Presidential elections.

However, with such solid numbers and a positive outlook, Fox’s stock currently lags behind the S&P 500, which makes me believe that it’s undervalued at the current market price. There are a number of reasons why I think that it will climb higher in the upcoming months. 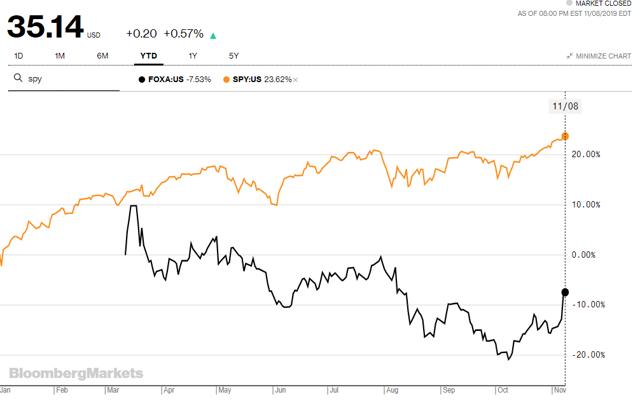 First of all, Fox continues to be active in the M&A field and is not reluctant to execute its strategic vision that was unveiled at its Investors Day back in May. In August, a fellow contributor Donovan Jones highlighted in his article Fox’s recent acquisition of Credible Labs and the reasons for such a purchase. In short, Fox will be able to establish a foothold in the ever-growing fintech space and become more than just a news company. In addition, earlier this month, it was announced that Fox will also acquire three TV stations in Seattle and Milwaukee to increase its presence in the local news market.

Also, while Fox sold the majority of its entertainment assets to Disney (DIS), it still kept its sports channels in its portfolio. Thanks to it, Fox will be able to leverage its sports audience by introducing them to its newest betting platform Fox Bet, as states slowly start to legalize online betting.

To make my bullish case stronger, I have compared Fox to other media businesses to find out how its stock trades relative to its peers. The table below highlights the financial performance of a number of companies and it also includes valuation ratios that will help us better understand the current lay of the land. I have decided to compare Fox to a wide range of media companies. My list includes heavyweights such as AT&T (T) and Comcast (CMCSA) and lightweights like CBS (CBS) and News Corp. (NWSA) due to the fact that all of them have a direct exposure to TV businesses and make money either from advertising, affiliate fees or subscriptions.

Source: Yahoo Finance. The table was created by the author.

As we could see, Fox’s EV/Revenue, EV/EBITDA and P/E ratios are either lower or in-line with the industry’s median, which makes me believe that Fox’s stock is indeed undervalued, especially considering the fact that its P/E is relatively lower to the P/E of other heavyweights.

Nevertheless, there are still a number of risks that are associated with the stock. Fox, without a doubt, is a news organization that most of the time highlights views of people from the right side of a political spectrum. Because of it, the company constantly becomes a target of political attacks from the opposite side of the spectrum that negatively impacts its reputation. In addition, there is a risk that if the overall market starts to depreciate in value in an event of a recession, then there is a great chance that Fox’s stock will follow the trend and will also lose some of its value, even though it generated a solid revenue in the last couple of quarters and its net income in Q1 was $513 million.

However, there are two additional things that in my opinion justify holding the company’s stock even when all of those risks are taken into account. First of all, Fox pays a semi-annual dividend of $0.23 per share. In addition, a few days ago, it was announced that the Board of Directors approved a $2 billion buyback program under which $500 million ($350 million for Class A, $150 million for Class B) will be spent in the near term to acquire the stock at the current levels. In my opinion, this is a smart thing to do considering the fact that the stock trades close to its all-time low and has a great chance to appreciate in value in the foreseeable future.

I believe that Fox is one of a kind media company. It is a conservative powerhouse that will greatly benefit from the upcoming election cycle. In addition, without the majority of its entertainment assets that were sold to Disney, the company and its shareholders no longer need to worry about a possible disruption of its business model from big tech companies. The recent earnings report clearly showed that people continue to watch news in the traditional way and are willing to pay higher fees to access Fox’s content. That’s why I believe that Fox has a great potential to create additional shareholder value in the months to come and it is a great media play for the long term. Because of it, I see no reason to close my long position in the company sometime soon.

Aleksey Razdolgin
1.74K Followers
Aleksey is CEO of the proprietary trading company Arbitrage Trades. Aleksey is in charge of creating new opportunities in this rapidly growing investments field. He is personally investing his own money into stocks, cryptocurrencies and other emerging trends of the financial industry.

Disclosure: I am/we are long FOXA. I wrote this article myself, and it expresses my own opinions. I am not receiving compensation for it (other than from Seeking Alpha). I have no business relationship with any company whose stock is mentioned in this article.